More than a month after security forces chased some 15,000 Nigerians from their homes in Badia East, one of Lagos’ largest slums, thousands of families are still sleeping rough.

The once vibrant community now resembles a disaster zone, with houses and shops reduced to rubble.

Iyabo Benson, a 32-year-old mother of five, was among those who lost their home during the 18 September demolitions.

She, her husband and their children spent three weeks amidst the ruins, sleeping on scraps of cardboard in a small space between two demolished homes, with nothing more than a worn, plastic sheet to shield them from the elements. Then, police came earlier this week and chased them away again.

“When it rains, especially at night, we get very wet and cold,” Benson told IRIN. “My youngest son [who is less than a month old] is ill … because we sleep in the open.”

She also worries about malaria because she no longer has a net to protect the family from mosquitoes.

Former residents say they were given less than 12 hours’ notice, by way of a few posted eviction flyers, before bulldozers rolled in and demolished their community, making it difficult to salvage their meager belongings.

Some residents have since been able to move to other slums, or stay with family and friends, but many families have settled in a narrow, overcrowded piece of public land sandwiched between the demolition site and the main road.

“The fact that the people still remain in the area about a month after their eviction shows that they have nowhere to go,” said Megan Chapman, of the Lagos-based Justice and Empowerment Initiative (JEI), one of several organisations to have condemned the demolitions and consequent “forced evictions.”

With nowhere to go, many people still remain in Lagos' Badia East amidst the ruins of their demolish 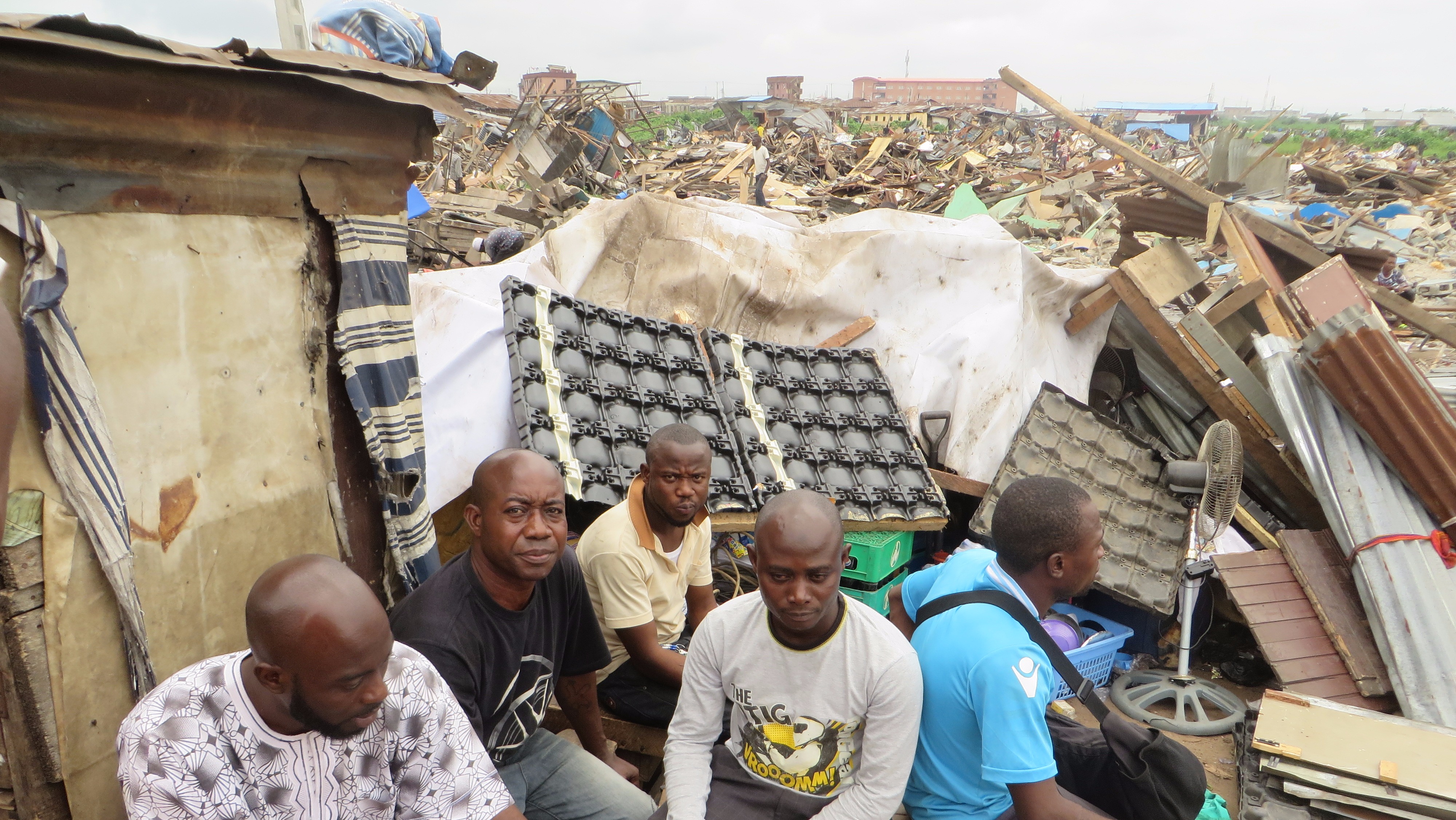 The government has yet to offer any sort of compensation or re-housing program for those who lost their homes.

Benson says she has no idea where they will go if and when they are forced away again.

Not the first time

The demolition and evictions came after the Lagos State High Court ruled that the land belonged to the powerful Ojora chieftaincy family, who has been trying to reclaim the land since the 1990s.

The evicted families, the majority of who are from southwest Nigeria’s Ilaje community, insist that the land belongs to them because the government resettled them in Badia East more than 40 years ago.

“When we relocated here, the whole place was a bushy swamp. We cleared it and filled it with sand to make it habitable,” said 70-year-old Ola Igbayilo.

For decades, the slums existed without anyone laying claim to them. But now, as land has become scarcer in the ever-growing metropolis that is Lagos, they are considered prime real estate.

“Slums are being targeted because they can easily be taken away from the poor who lack the financial resources to resist the acquisition of their land,” said Segun Olutade, who works with Shelter Watch, a Lagos-based organization that works to improve human settlements.

“No one will attempt to acquire land in the affluent parts of the city because the rich will get the best lawyers to fight back.”

Badia East residents say they weren’t even given the chance to participate in court proceedings, which came to a close back in March 2014.

According to a number of international instruments, including the International Covenant for Economic, Social and Cultural Rights, to which Nigeria is a signatory, authorities must respect “the right to adequate housing by refraining from forced evictions.”

Additionally: “Evictions should not result in individuals being rendered homeless or vulnerable to the violation of other human rights. Where those affected are  unable to provide for themselves, the State party must take all appropriate measures…to ensure that adequate alternative housing, resettlement or access to productive land…is available.”

The last major evictions in Badia East took place in 2013, when the government demolished the homes of more than 9,000 people, following a $200 million loan from the World Bank destined for slum upgrading. But instead of building decent housing for the poor, the money and land was used for upmarket homes, shopping centres and offices.

Few people were compensated; none were able to afford the new homes.

The government has denied the use of security forces to oversee the demolitions this time around.

Following the demolition, the state government is said to have convened talks between the Badia East residents and Ojora family in an effort to resolve the land dispute issue.

But for most, it is too late. Their homes have already been destroyed.

Chapman says JEI, along with other local organizations, is considering legal action to enforce the rights of the evicted residents.

With much of Badia East reduced to rubble, the bulldozers, which are still on site, are ready to move into Badia West, Matimininu and Ladejobi, three other slums marked for demolition.

While families there will have more advanced notice than those of Badia East, the demolitions are expected to bring the number of people rendered homeless to more than 30,000.

“To lose your house during a slum demolition is to face a bleak future,” Bimbo Osobe, who lost her own Badia East home in 2013, told IRIN.

More than two years later, Osobe says she still is unable to afford another permanent accommodation.

Many of those from Badia East are likely to face a similar fate, as the majority of residents were self-employed, involved in petty commerce, or running businesses from small shacks within the slum.

When the bulldozers came through, along with their homes, they also lost their livelihoods.

“The suffering is too much,” said Kemi Ogunyemi, a mother of four who lost her home and business. “The restaurant through which I made a living has been demolished. Now I have no way to feed my family.”