Greece appears set for a summer of migrant chaos, with soaring numbers of people arriving by boat at southern Aegean islands where tourist bookings and ill-equipped authorities could soon lead to an accommodation crisis.

During the first four months of the year nearly 27,000 migrants and asylum seekers arrived in Greece, according to police figures, compared to 5,100 during the same period last year.

Nearly half of them - 13,500 - entered in April alone, most after boarding smugglers’ boats in Turkey and heading for some of the many Aegean islands.

The arrival of migrant boats to the islands is not a new phenomenon. Since Greece virtually sealed off its land border with Turkey in 2012, migrants have been making use of sea routes, but previously most arrived to the north Aegean islands of Lesvos, Chios and Samos and in manageable numbers. Now arrivals are being registered even in the more southerly Aegean islands such as Kos.

Stathis Kyrousis, head of mission for Médecins Sans Frontières (MSF) operations in the Dodecanese – a group of 12 islands in the southeastern Aegean - worries that arrivals in places like Kos, a popular tourist destination that lacks even basic migrant reception facilities, endanger not only the well-being of the migrants, but also the efforts of the Greek government to manage the growing crisis.

These islands are completely unprepared for what is happening.

“The Dodecanese islands is the only entry point in Europe without an established system of first reception [where migrants can be given basic medical and humanitarian assistance and screened to determine if they are asylum seekers or irregular migrants]” Kyrousis told IRIN. “These islands are completely unprepared for what is happening and the only service provided by authorities is the efforts of police to register arrivals and provide people with applicable documents.”

Between January and April, the Dodecanese islands received 8,527 migrants and asylum seekers compared to just over 1,053 during the same period last year. The majority of them are Syrians who appear to be favouring the sea route to Greece from Turkey as somewhat less dangerous than the Central Mediterranean route between Libya and Italy where over 1,800 migrants have lost their lives since the beginning of the year.

On Kos, one of the larger of the Dodecanese islands, local authorities have opened up an old hotel building with 20 rooms and new arrivals are being directed there. But Kyrousis explained that the building lacks electricity and no food is being provided. “Many of them, Syrians especially, are still able to provide for their own lodging and food so they choose to stay elsewhere, but during the summer when tourists arrive [and lodging becomes too expensive], even this option will not be applicable and a lot of people will just opt to sleep rough instead of getting jammed in a building that can easily become a health hazard.”

A temporary holding area for migrants who have just arrived on the Greek island of Kos which lacks any migrant reception facilities and is struggling to deal with a sudden influx of boats. 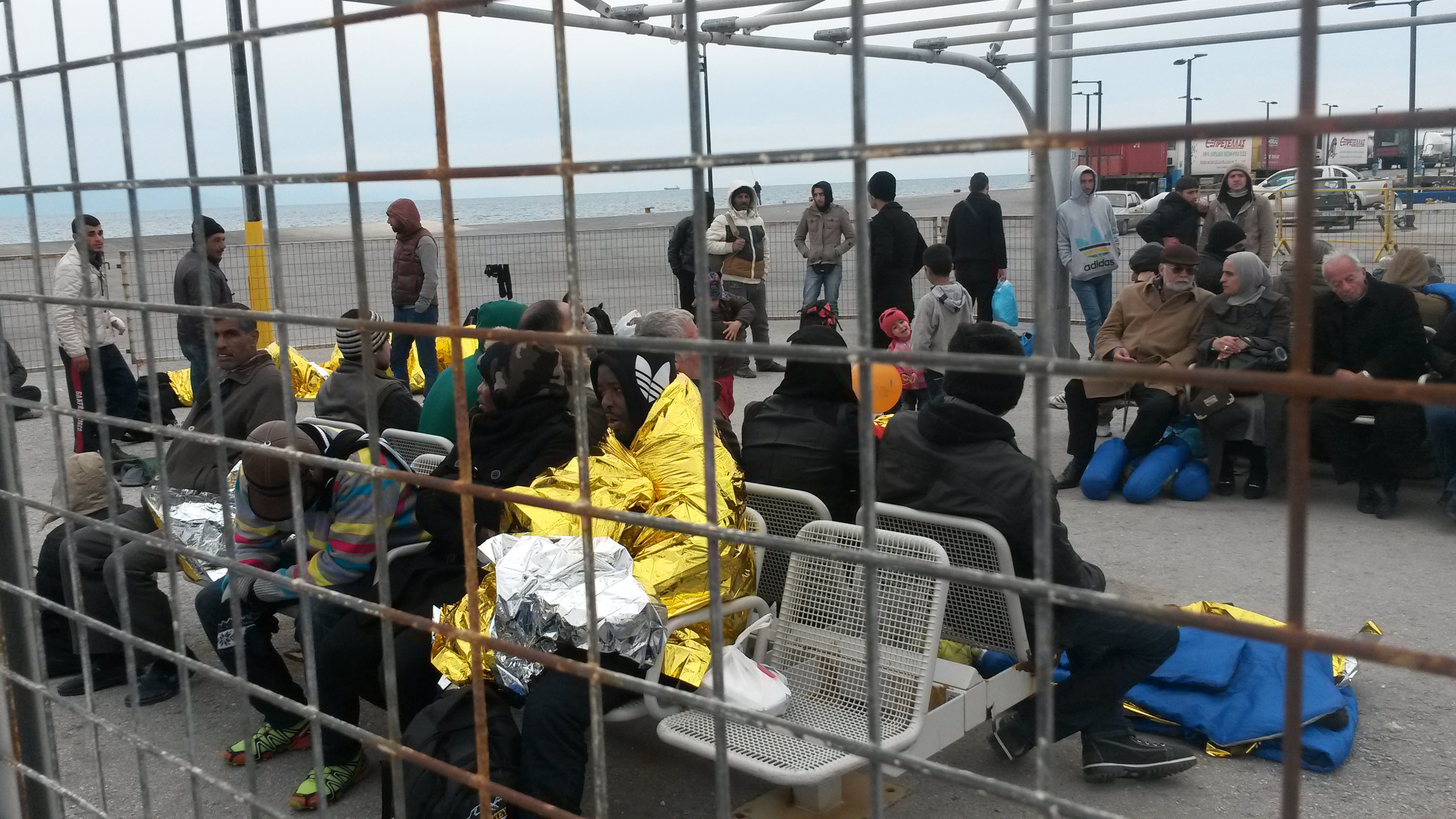 In the northern Aegean islands where such influxes are more common, authorities are struggling to deal with higher than usual numbers. Lesvos received 10,624 migrants between January and April, nearly four times as many as in 2014, and Chios has seen a similar increase with nearly 4,000 arrivals.

Natasa Strahini, a lawyer and activist based in Chios, said that while the northern Aegean islands were more experienced and better equipped to deal with migrants arriving by boat, this year’s numbers were likely to present a real challenge. “The system is already pushed to the edge and given we have the summer ahead of us, we wonder what it is going to look like,” she told IRIN.

In Lesvos, new arrivals often have to be kept in an open area at the port until space becomes available at a holding centre, a situation Strahini described as “chaotic and shameful”.

In Chios, the local detention center, which is being used to accommodate new arrivals until they are processed and provided with documents, is already full and the municipality has had to create a makeshift camp with tents, said Strahini.

Kyroysis said that opportunities for improving reception conditions on the islands are being ignored. “There are old buildings and sites that could be appropriated with limited resources, but the government always says that it lacks even minimum resources for those purposes.”

The left-wing Syriza party came to power in January promising a more welcoming policy to migrants and asylum seekers than its predecessor which aimed to deter migrants with strict border controls, even allegedly pushing back migrant boats coming from Turkey, and long periods in detention for those found in the country without documents. But the new government has been slow to react to the increase in arrivals to the islands. It has put in place a new Ministry for Migration Policy to push ahead with immigration policy reform and promises to reduce the use of immigration detention but appears to lack the administrative and financial capacities to manage the current influx.

It also faces difficult relations with local authorities and island communities that view the arrival of large numbers of migrants as a threat to tourism which sustains the economies of the islands. Local news websites are full of complaints about migrants sleeping rough along with pictures of them drying their clothes in the open while European tourists walk by.

George Tsarbopoulos, head of the UN Refugee Agency (UNHCR) in Greece noted that most of the new arrivals this year were Syrians, while the number of Syrians arriving in Italy had decreased sharply in the last few months. Greece now appears to be the main entry point for Syrian refugees to Europe.

He explained that new arrivals to the islands spent a few days at police stations to determine their immigration status after which they were issued with papers and released.

Syrians with valid documents such as passports or birth certificates are given six-month residency papers while irregular migrants are provided with administrative expulsion notices giving them one month to leave the country.

The majority of the migrants and refugees quickly move from the islands to the mainland and then head to Athens, but the lack of large concentrations of migrants in the capital suggests they do not stay long.

Ahmed Kashani, a Syrian residing in one of the cheap hotels in downtown Athens, says “people who come don’t want to stay in Greece and a lot of them head north”.

Heading north means attempting the Western Balkan route through the former Yugoslav Republic of Macedonia and Serbia and then into Hungary and onwards to northern Europe. Those with more resources pay for false documents making the journey to northern Europe less risky and arduous.

According to Europe’s border agency, Frontex, very few opt to apply for asylum in Greece. Last year only 9,432 did so compared to 160,000 that applied in Germany, 75,000 in Sweden and 63,000 in Italy. The EU’s Dublin regulation normally requires asylum seekers to apply for asylum in the first country where they are registered or risk being returned to that country. But returns to Greece have largely been on hold since 2011 when both the EU Court of Justice and EU Court of Human Rights ruled that reception and detention conditions there were inadequate.