The deal on a unity government in Afghanistan to end the electoral deadlock was greeted with celebrations in the eastern provinces where tens of thousands of recent Pakistani refugees say they have been victims of the uncertainty.

In the provinces of Khost and Nangarhar along the border with Pakistan, locals distributed sweets to refugees, who hope they will now get more attention.

The special representative of the UN Secretary-General, Ján Kubis, said the “uncertainty of the past months has taken a heavy toll on Afghanistan's security, economy and governance.”

According to the UN Refugee Agency (UNHCR), more than 20,000 families took refuge in Afghanistan in the aftermath of the Zarb-e-Azb (Sword of the Prophet) offensive against Taliban militants launched by the Pakistan army on 15 June in North Waziristan, a tribal area bordering the Afghan provinces of Khost and Paktika.

“We were not expecting too much from the Afghan government as we knew the tense situation but now, with the announcement, so much changed our Afghan brothers like Afghanistan reborn. We are sharing their happiness and are hopeful that we will have better days ahead,” said Noor Wazir.

Pakistani refugees who have fled to Afghanistan since June say political turmoil there had delayed the delivery of aid. Some 3,000 families from North Waziristan were given shelter at Gulan Camp in Khost, Afghanistan, while thousands of other families moved to Paktika, Paktia and Nangarhar provinces. The military has sealed access to North Waziristan except for the Bannu road leading to the Afghan border.

“We have provided edible support to 15,521 families while non-edible to 12,746, with distribution of cash assistance to 2,480 families,” Khost Governor Abdul Jabbar Naeemi told IRIN. “They are our brothers and I personally will leave no stone unturned to help them in time of need.”

But Nasir Wazir from North Waziristan, now living with his family as a refugee in Gulan Camp, has a different story to tell. “The aid provided at the camp is not enough for our family. We tribals have large families and so I have to beg to meet the extra need of my family. The cash provided to me was too little to provide basic necessities to my six-member family, which is relatively small,” he told IRIN.

“In Miramshah or in Bannu [Pakistan] there are opportunities to work and earn money but Khost has a very limited market. We came here because of the curfew in Miramshah and so all the roads were blocked. As Khost is the nearest place to our village so we came here. Everybody is saying that the situation will improve when the new government is formed,” he said.

In presidential elections on 5 April to replace long-serving President Hamid Karzai, no candidate got an absolute majority in the first round, leading to a second round run-off on 14 June between Ashraf Ghani, a former World Bank employee, and Abdullah Abdullah, a former foreign minister. The results of the second round were contested with allegations of widespread fraud and corruption, leading to a prolonged stand-off, which only ended with an agreement on 21 September.

Speaking before the political deal, Safeer Afghanyar, a professor at Nangarhar University in Jalalabad, said the dispute had been causing delays in delivery on the ground.

“All the mega-projects are hanging in air. The provincial administrative setup is so disturbed that it has almost stopped moving,” he said. “All the governors are just waiting for their imminent removal and discharge from their duties. So all are eyeing Kabul, including the global community present in the country. In this situation it is not surprising that Pakistani refugees are not getting proper attention.”

Mohammad Gul Wazir, 65, of Ghulam Khan area in North Waziristan, lives 17km from Gulan Camp in a mud house with a host family, and says he is struggling to make ends meet.

“I have seven children with three daughters. The people of Khost are very hospitable and one of them gave us whatever was with them: a room, kitchen utensils and some clothes,” he told IRIN. “But they, too, are poor. Therefore, without telling them, I begged and earn 200 to 300 Pakistani rupees per day [$2 - $3]. With that money I am trying to manage our daily expenses. People here are saying that there were lots of opportunities a few months back but now everything is at a standstill due to the political crisis.”

Aid groups working with refugees said the signing of the political deal might not immediately bring greater donor funding, but Danielle Moylan, protection and advocacy manager for the Norwegian Refugee Council, said they were “hopeful that the political deal will instil confidence in donors to maintain and increase their commitment to helping the people of Afghanistan for the long term.”

However, she warned that the Taliban’s rejection of the political deal would mean access to refugees would remain difficult. In two separate incidents in the past few days in Khost, improvised explosive devices were set-off targeting Afghan police. Insecurity is a major factor limiting aid delivery.

Members of Wazir tribes from North Waziristan after getting food items in Khost, Afghanistan 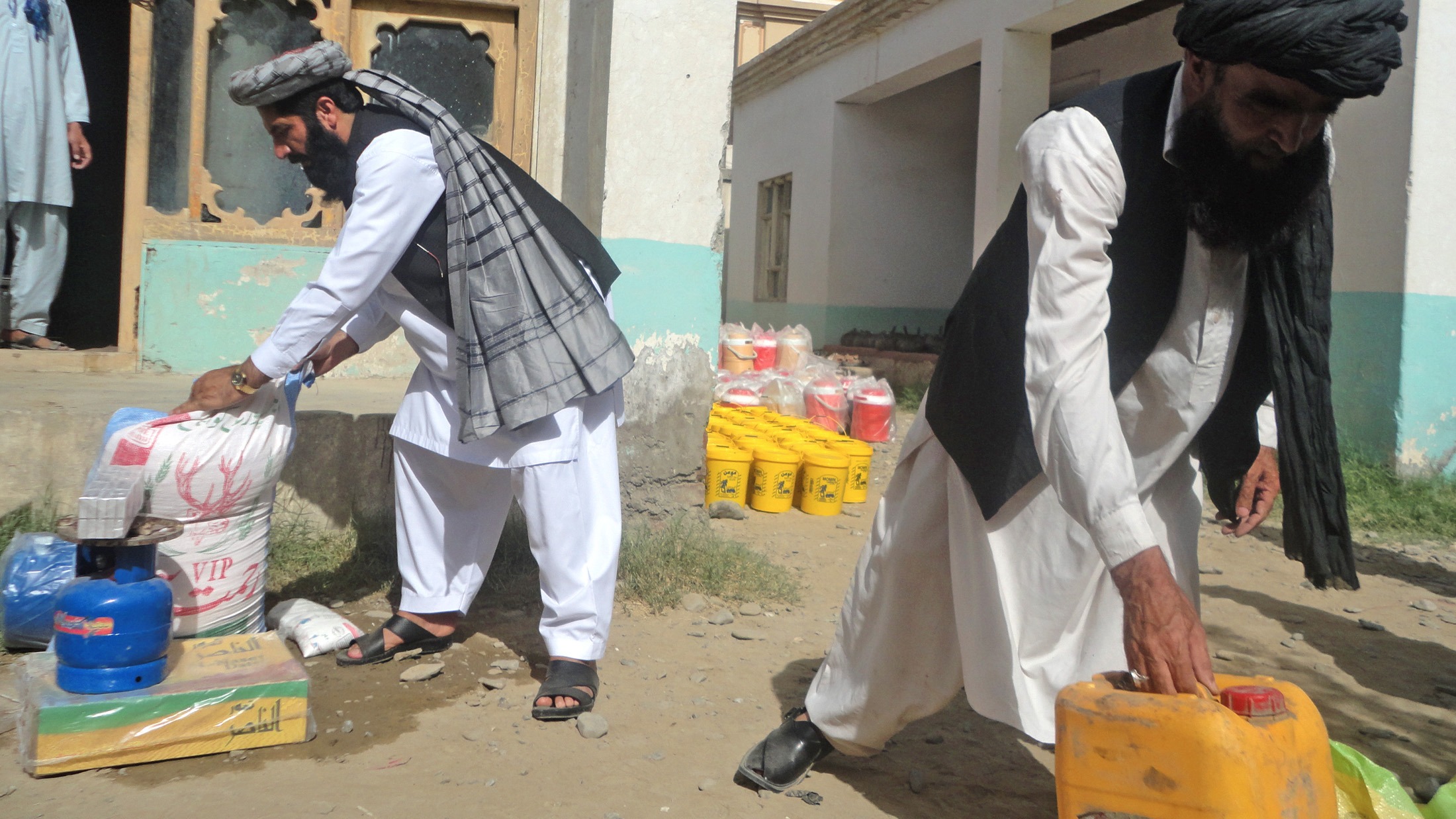 Allen Greenway, country director from the International Rescue Committee, said that in the aftermath of the agreement, energies now needed to be “directed towards helping those most desperately in need in Afghanistan, including the 110,000 Pakistan refugees that fled fighting over the summer.”

But he said extra support would be needed: “We can’t expect Afghanistan to solve such immense problems on its own. The Pakistan refugees are unlikely to be returning before the onset of another harsh winter and are in urgent need of support along with the other 667,000 people inside Afghanistan that have been forced from their homes.”

Meanwhile, hundreds of Pakistani families have returned to their homeland, saying the political turmoil in Afghanistan meant they never received assistance.

“We were warmly welcomed by our [Afghan] brothers on other side of border. I spent this time in Bermal [Paktika Province]. The problem there was lack of medical facilities as most of our children became sick there,” said Mir Kalam Wazir, a North Waziristan refugee who returned to Pakistan with his family on 17 September.

“Most of the [Afghan] officials were waiting for change of government and we were not aware of what would be our future. We were told that international organizations are providing aid but I and none of the families with us received any.”

However, political turmoil is not unique to Afghanistan; Pakistan itself is going through its own political unrest with anti-government protests in the capital, Islamabad, calling for Prime Minister Nawaz Sharif to step down.

“Upon arrival [in Pakistan] we are feeling the same negligence, as the whole country is focusing on political crisis in Islamabad: the same issue of fraudulent elections. Now I don’t know where to go. Even media of both the countries are not giving heed to our issues. I think until and unless the political issues in both countries are resolved, nobody will hear our voice,” Mir Kalam Wazir added.