The teacher’s attempt to raise some festive spirit did not save this little community. Schools officially reopened in Bangui a month ago, but children will not be studying at the GSEFI any time soon.

Apart from a hole in the outer wall just big enough to crawl through, the school buildings are largely undamaged by the fighting and insecurity of the past few months. But most of the pupils at GSEFI were Muslim and have probably now fled Bangui, or dare not approach this no-man’s land between their enclave and the rest of the city.

“The anti-balaka [an anti-Muslim militia] wanted to destroy the place,” a local guide told IRIN, “but the Burundians [African Union troops] drove them back.”

Many other CAR schools have been damaged or destroyed since the country descended into chaos after a rebel alliance seized power last year, according to the UN Children’s Fund (UNICEF).

A recent telephone survey of 355 schools contacted by the education cluster - the coordinating body for education activities - in CAR found that 52 had been looted by armed groups in recent months, 26 occupied by armed groups, 24 struck by bullets and 15 set on fire. In some rural areas entire villages have been burned and local schools, usually built of mud and sticks, would have been destroyed with them.

Since there was no information from some of the areas worst affected by violence, the overall impact could have been worse.

Looting by non-combatants was probably more widespread than the figures suggest. IRIN visited six schools in Bangui’s Petevo District on 7 April, and found that at three of them, the metal roofs had been removed - “blown off by the wind” local people said, but a guide thought it more likely they had been stolen.

The Nyaragba state school, which had been occupied by the anti-balaka in December and January, had not apparently been looted or damaged, although local people said the militia had killed several of their Muslim neighbours.

Nyaragba had not yet reopened, whereas some classes were being held at the other state school that IRIN visited and at three of the other four schools, all private. One of these schools had already replaced its stolen roofing sheets, a teacher said.

Education Ministry official Kongbo Ouali told IRIN that as of 4 April about 80 percent of schools across the country had reopened.

More than two thirds of the state schools and just over half the private schools contacted by the education cluster - which includes staff from CAR's ministry of education - were still closed.

Insecurity is clearly a major reason why many schools remain closed, but the difference between the state and private sector suggests that pay arrears are also important: 32,000 public servants, including several thousand teachers at state schools, stopped receiving their salaries for several months and although these began to be paid again in March, thanks to support from donors, several months’ pay has been frozen.

An Education Ministry official, Antoinette Redebale, told IRIN: “If there weren’t insecurity, children could go back to school. But there is another aspect: Teachers’ salary arrears must be paid, and there should be help for those teachers whose houses have been looted or burned.”

Parents that IRIN spoke to in Bangui’s 4th arrondissement, an area where the anti-balaka have had their main base, agreed that security is their prime concern and for the moment they preferred their children to attend a “temporary learning space” organized by UNICEF in the grounds of the Boy Rabe monastery, rather than go to other schools.

This was because the monastery grounds are a refuge for the whole population in times of danger, and they felt confident their children would be looked after there.

Teachers in the Boy Rabe area said some of the schools in the district were open, but that the children did not attend. A parent from the less violent south of the city, Simplice Vala, said: “Sometimes the children go to the state school but after one or two hours they leave, because the teacher has not arrived.” State schools are not regular, he complained.

“The government does not have the money to pay the arrears and teachers, like other government workers, will have to make sacrifices,” the ministry’s Ouali said.
He warned that absent teachers could be sacked, while admitting that a survey of absenteeism has been postponed “until the administrative conditions are right”.

UNICEF and other aid organizations helping the CAR education sector are concentrating in the short term on restarting education in areas where security is a major constraint.
UNICEF says an estimated 23,000 children are attending a total of 115 temporary learning spaces, including 94 in Bangui, organized with its partners. 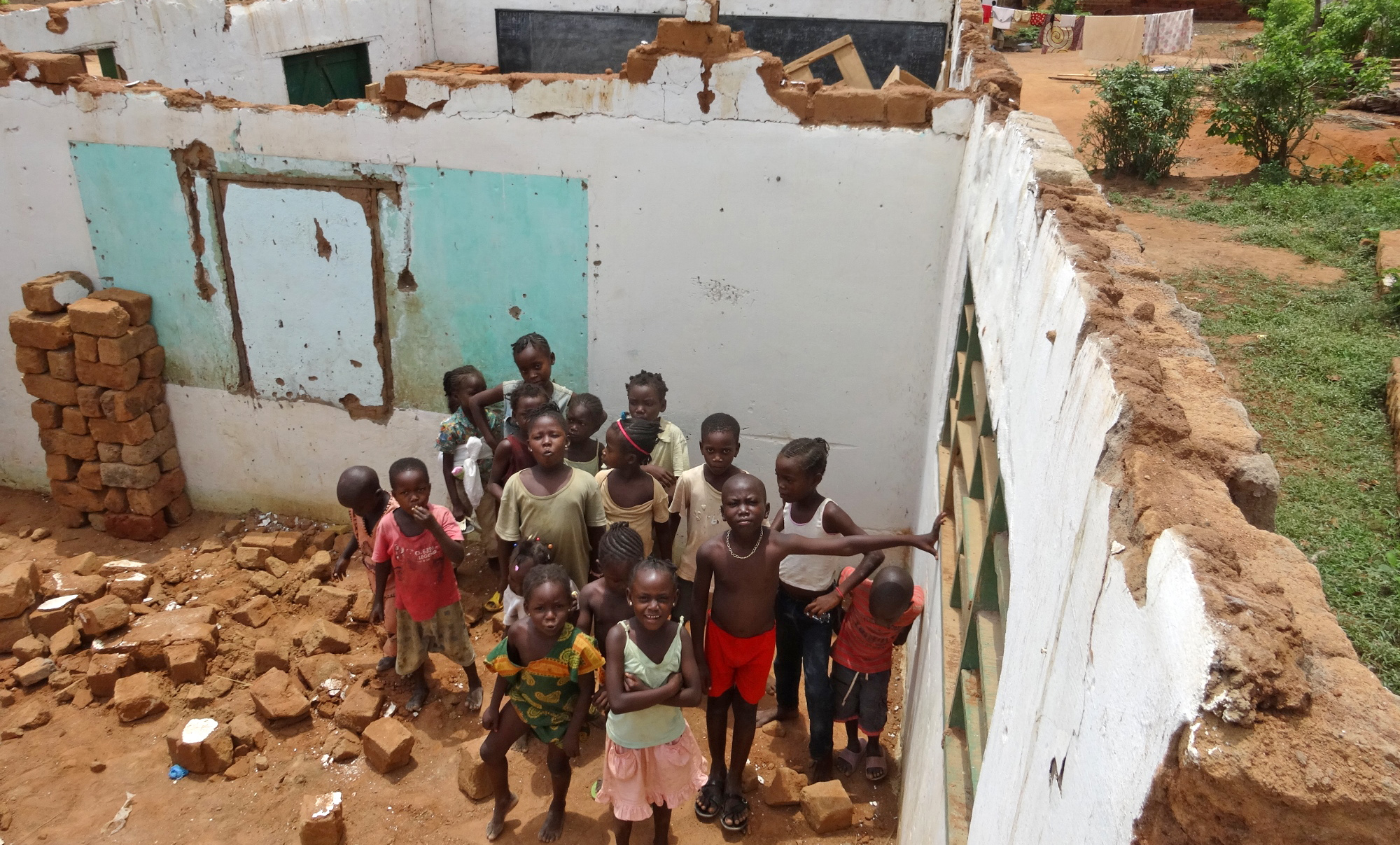 The “temporary learning space” (known by its French acronym Etape) is basically a large tent, equipped with mats and blackboards but no desks or benches, where more than 100 children can attend a class.

The Boy Rabe monastery site hosts 16 of these tents and at 11am on 3 April was hosting classes for several hundred primary-school-age children.
The organizers said the site could cater for up to 1,600 children per day, with pre-school and primary classes in the morning and secondary classes in the afternoon.

“The idea initially was to free children from the evil spirits they have been living with, memories of killings and corpses,” Eric Kitio of the Jesuit Refugee Service, one of UNICEF’s partners, told IRIN.

“But after a few sessions of singing and dancing, the children’s parents wanted them to have some serious schooling, so now we have more than a hundred teachers working here.”

The Etape programme is paying 698 teachers a monthly incentive of the equivalent of US$65 (half of the starting salary for a qualified teacher).

“Peace education” is a key part of the programme.

Asked to sum up the core message of peace education, 15-year-old Louange Gueguere said: “We want peace in our country, and we want the truth and we want to forgive the Muslims - who have done things.

“And we want joy, and forgiveness between us - us and the Muslims.”

While they propose to continue with the Etape programme and expand it outside Bangui, UNICEF and other agencies working in the education “cluster” say they have strategies to help the return to formal schools. These include lobbying for better security, providing equipment and light repairs, distributing school-in-a-box kits and organizing school canteens.

The cluster’s bulletin also says it “is concentrating strategies on the payment of teachers’ salaries, on providing them with transport to school and suitable clothing” (for those whose belongings were looted).

Globally UNICEF has a policy of not paying teachers’ salaries, but it can offer incentives for teachers of ‘catch-up’ classes, the agency’s education manager in CAR, Celeste Staley, explained.

In the 2012-13 school year the nation’s children lost about five months of schooling, so there is much catching up to do. But all of the above will depend on funding. This year the humanitarian system has appealed for $28.6 million for the CAR education sector, including $7 million for UNICEF programmes, none of which has been received.

The humanitarian coordinator for CAR, Abdou Dieng, told IRIN: “It is because of poor education that the country finds itself in its current state.”

Statistics in UNICEF’s annual publication State of the World’s Children suggest the CAR scores worse on educational indicators such as literacy and school attendance than any other Central African country except Chad.

A more detailed situation analysis of the CAR’s educational attainments compiled by UNICEF in 2010 suggests the rate of literacy in the country fell after 2000 and was only 35 percent in 2009.

Years of insufficient investment mean the country has only about 9,000 teachers, of whom half are unqualified maître-parents (community volunteers) or semi-qualified trainees. CAR’s only teacher training college offers just 150 places a year (for a two-year training), too few to achieve acceptable teacher-pupil ratios in a country of 4.6 million people.

UNICEF’s deputy representative in CAR, Judith Léveillé, told IRIN: “The country is facing a major crisis but it’s also an opportunity to build back better, making sure that the young learn to read and write, think critically, respect differences and have a chance to take part in reconstruction and reconciliation.

“Schools need to be rehabilitated, text books need to be printed, teachers need to be trained and encouraged to go to the interior. And for that to happen huge resources need to be channelled to the sector.”