In the vast swamplands of South Sudan’s Sudd region, tens of thousands of recently displaced people (IDPs) are living with little food and no sanitation facilities on inaccessible islands, according to local officials. They fled after attackers, allegedly from Rumbek (Lakes State in central South Sudan), swarmed across the county burning houses and raiding cattle on 7 February.

Flying over the county headquarters of Panyjiar in southern Unity State, at least half of the houses appear to have been burned to the ground. The IDPs on the islands need food, but for now there is no way to reach them. “If you don’t have a canoe, you can’t go there,” said Simon Kuol, coordinator of the Relief and Rehabilitation Commission of Panyjiar County.

On 27 February, the UN’s top humanitarian official, Valerie Amos, expressed deep concern over “the grave humanitarian situation in South Sudan, where, despite the recent ceasefire agreement, the lives of millions of civilians are threatened by lack of food, outbreaks of disease, and continued violence.”

Sitting in the shade of a palm tree on an island an hour’s canoe ride from Nyal, a town in Panyjiar, Rebecca Nyakang said her seven children have eaten nothing but the blackened roots of a water lily plant and the skin of palm nuts for 14 days in a row. Nyakang is living with her husband and children on a tiny mosquito-infested island just a few hundred metres wide surrounded by thousands of acres of swamp. They waded for three hours through bull-rushes in waist-high water to get here. She holds out three water lily tubers like dirty beetroot, which she scavenged from beneath the water. "It's not nutritious, it's just to survive." (While very low on calories, such roots do have some nutritional content.)

They are stockpiling these wild foods for April when the rains come and they return to their home in Nyal to plant their crops. There is no food at all at home now, they say, because floods destroyed the crops last year, and supply routes have been cut off due to the conflict. But by April, it may be too late to give the assistance they need. Nyal is in effect landlocked, the only road is impassable, and the landing strip is not operational during the rains.

The events unfolding in Nyal and its surrounding swamplands are just one example of how communities all over South Sudan are in urgent need of food assistance, but out of reach, either due to insecurity or lack of infrastructure. A scramble is under way to prepare food distributions to assist them, aid workers say. Some 3.2 million people are currently in an “emergency” or “crisis” phase of food insecurity under the IPC classification system. In less than two months, much of South Sudan will become inaccessible due to rain.

On 11 February, Humanitarian Coordinator in South Sudan Toby Lanzer raised the potential for the situation to deteriorate drastically. The UN is focusing on saving lives, preparing food distributions and "preventing a famine”, he said.

"Access remains a major challenge. This is true even at the best of times in some parts of South Sudan, and even more so now,” Challiss McDonough, spokeswoman for the World Food Programme (WFP), told IRIN. This time last year, WFP warned that 4.1 million people would be food insecure in 2013. By February this year, that figure had risen to up to 7 million people - almost two thirds of the total population. Even in a normal year, at least 10 percent of the population experiences severe seasonal food insecurity, regardless of agricultural performance.

A community of people from Nyal in Panyjiar county living on Leerjak, a formerly deserted island in the Sudd swamplands, one hour from Nyal by canoe. They arrived on Leerjak on 7 February, after attackers burned houses in the county and left an estimated 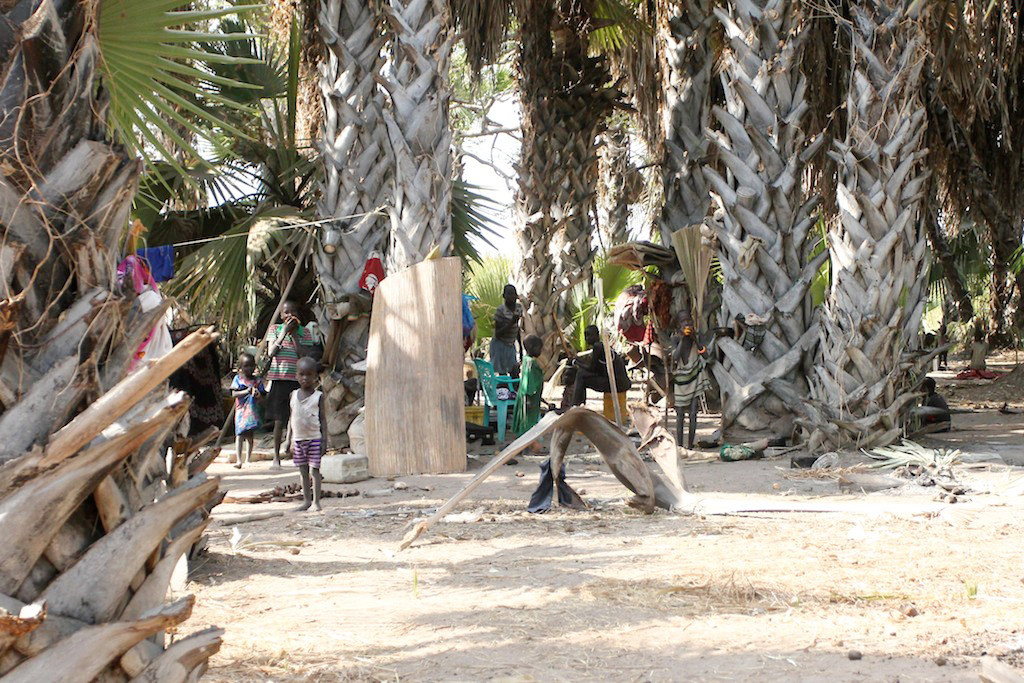 "The three states most affected by the conflict - Jonglei, Unity and Upper Nile - are also the three that were most food-insecure before the crisis started,” McDonough said. She added that WFP had created mobile distribution teams so that they are more responsive to the ever-changing environment. These teams will attempt to take advantage of windows of opportunity when the security situation improves to carry out assessments and food distributions in areas they have not reached.

Looting has been a major problem for humanitarian actors, including WFP, which, as of 27 February, “estimates that some 4,600 tons of food has been looted - enough to feed more than 275,000 people for a month. WFP continues to verify reports of looting and recover lost stocks where possible. Additional pre-positioned food remains at high risk.”

Michael Kuany, who works in Nyal for Sign of Hope, a German NGO, said the problem of food insecurity had worsened due to environmental factors in recent years. “Since 2011, there’s been an increase in water levels. Every time people plant, in July there’s too much rain. The water comes in, and sweeps away the plants,” he said. Before the conflict started in December, he said life was “fair” in Panyjiar. “People depended on the market and could get supplies, but when the conflict started, traders could not risk their lives to bring food.”

For those in the swamplands of Unity State, the best hope is that crops this year do not fail.

Every day, Rebecca Nyakang grinds water lily roots with a stone and cooks the powder in a saucepan with water. Her husband points to the dry skin of one of her children, suggesting they are not getting adequate food. Sanitation is also bad; these communities are defecating in the same water they are washing in and drinking.

Local health worker Bernard Ondieki fears outbreaks of diarrhoea, malaria and typhoid. If disease takes hold, the nearest medical treatment will be at least an hour away by canoe, three days for those on the islands furthest away.