Efforts are intensifying to improve access to much needed humanitarian assistance to remote Philippine islands, one month after the category 5 Super Typhoon Haiyan (local name Yolanda) barrelled into the archipelago. The typhoon made landfall six times, battering the central islands and leaving a path of almost total destruction in nine of the country’s 17 regions.

Many affected people live in coastal communities that were flattened by the storm surge, and reaching some isolated pockets is a difficult logistical task that involves navigating roads blocked with debris and toppled trees, narrow waterways and mountainous terrain. Some remote areas that are difficult to reach in ordinary circumstances have become even more inaccessible since Haiyan swept through the region.

“The biggest challenge was the magnitude of the disaster, compounded by getting to the affected areas scattered across the different regions and various [types of] terrain,” said Pierre Honnorat, of the World Food Programme (WFP), who is heading the logistics cluster, a group of aid organizations working on the mechanics of accepting, storing and distributing relief goods.

“During the first week to ten days, we were working on a ‘push’ strategy. We followed the path the typhoon took and, based on initial photos that were sent in, we sent out trucks [carrying relief items] to affected areas, without any special targeting,” Honnorat told IRIN.

As aid starting arriving from various countries and local and foreign aid organizations, the challenge grew to manage, coordinate and effectively deploy the goods provided by some 45 humanitarian actors. Of the US$348 million requested for the Haiyan Action Plan, $168 million, or 48 percent, has been funded.

“By identifying the key affected populations and assessing their needs, we moved to a ‘demand’ strategy to make sure that the right support would go to the right people,” said Honnorat.

The Cebu international airport, 283km from the severely affected areas of eastern Samar island and Tacloban, was established as a main administrative and logistics hub to serve as a delivery point where relief goods could be off-loaded and temporarily stored, or deployed to other areas. The Tacloban city airport was damaged and inoperable for six days.

Mobile storage units (MSUs) have been erected in key areas to provide temporary storage areas, as much of the region’s infrastructure, including storage facilities, was destroyed. Consignment tracking officers have been assigned to Cebu, Tacloban and the capital, Manila, to monitor cargo movements and requests.

Coordination hubs have also been set up in the cities of Roxas on Panay Island, Ormoc and Tacloban on Leyte island, and Borongan and Guiuan on eastern Samar island. Here, relief items are stored temporarily, loaded on trucks for deployment or shipped via sea on “roll-on roll-off” vessels with a carrying capacity of up to 2,400 tons of cargo to transport vehicles.

With basic road infrastructure badly damaged, access to the coastal communities of Guiuan in Eastern Samar, where Haiyan first made landfall, was extremely difficult but has now improved. Roads have been cleared and public transportation is running once again but is still sporadic.

The International Committee of the Red Cross (ICRC) is chartering barges to transport its service vehicles and trucks loaded with relief supplies and water treatment units some 300 nautical miles from Manila to Tacloban. From Tacloban the vehicles travel to Guiuan by road.

Foreign military support can quickly mobilize and deploy assistance to complement an affected country’s own usually stretched military service in time of disaster, and can also conduct reconnaissance missions, as well as maritime and airborne search and rescue operations, that are not easily matched by the humanitarian community to find pockets of survivors in need of aid.

Responding to a request by the Philippine Government, close to two dozen military contingents on goodwill missions from various countries have been delivering relief goods and/or providing support through the use of various military assets, including ships, aircraft and trucks to assist the relief efforts.

“The number and diversity of countries that have contributed military support in response to this disaster occurring in a single state is unprecidented in recent history," said Kaoruko Seki, who is on emergency assignment in Tacloban from the UN Office for the Coordination of Humanitarian Affairs (OCHA) in New York.

Support for the delivery of aid by foreign military services has become more common in recent natural disasters, such as the Indian Ocean Earthquake and Tsunami (2004), the Haiti Earthquake (2010) and the Pakistani Floods (2010). 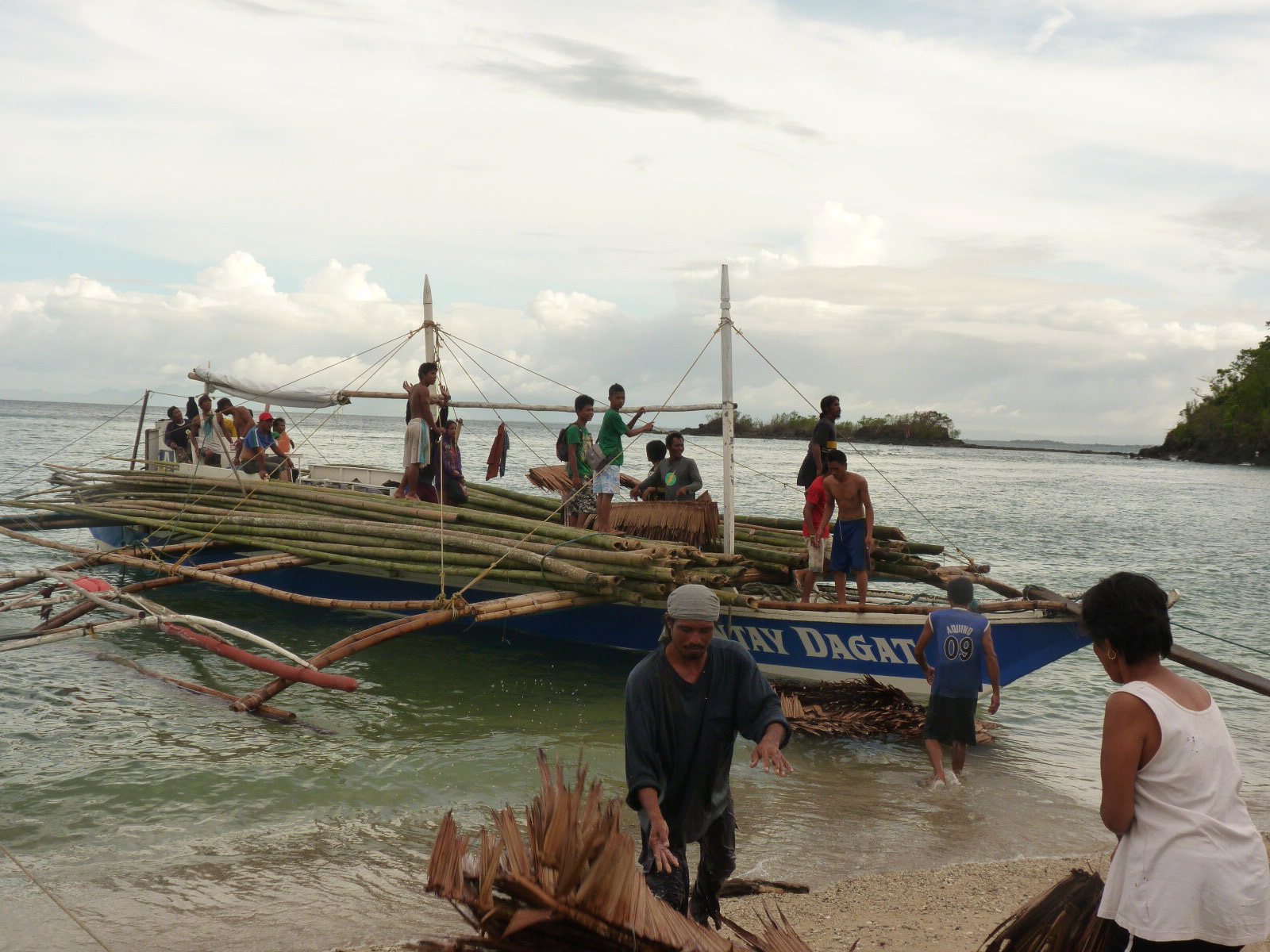 However, particularly in instances where a natural disaster takes place in situations of armed conflict, there have been concerns about maintaining impartiality and neutrality in delivering assistance with the support of the military.

The Guidelines on the Use of Foreign Military and Civil Defence Assets in Disaster Relief (also known as Oslo Guidelines), read together with the Guidelines on the Use of Military and Civil Defense Assets to Support United Nations Humanitarian Activities in Complex Emergencies (MCDA Guidelines), as well as the Inter-Agency Standing Committee Working Group (IASC) Reference Paper on Civil-Military Relationship in Complex Emergencies, provide a framework for engaging military support for humanitarian operations in such mixed settings.

In the Philippines, moving aid and medical workers, relief goods and construction materials across nine affected regions has required land, sea and air transport. “After receiving the goods, getting them from point A to points B and C requires coordination and a sometimes mix of different forms of transportation provided by different contigents,” said Seki, who is coordinating the mobilization of military and civil defense assets (MCDA) used in the Typhoon Yolanda/Haiyan response effort.

A recently released Multi-Cluster/Sector Rapid Assessment (MIRA), produced by more than 40 agencies working across the affected area, including 92 municipalities, notes that more than one million homes were damaged by the typhoon, and some five million survivors are in urgent need of construction materials. The cost of construction materials has multiplied and construction workers are hard to find because they are either rebuilding their own homes, or have started addressing their communities’ needs.

“The Philippines armed forces and foreign militaries have the reconnaissance capacity to assess terrain and location of areas in need,” said OCHA’s Seki, also noting that although their use to support humanitarian actors within a situation of an armed conflict is a “last resort”, use of national and foreign armed forces in this current context was seen more as peacetime mobilization for disaster response, undertaken in harmony with the laws of the requesting host State.

She also cautioned that especially for areas that go beyond the emergency phase, sensitivity and good judgement were required by foreign forces so as not to take away business and other income-generating opportunities from local providers of recovery and reconstruction, particularly from the local civlian population whose livelihoods had been most severely affected by the disaster.

The Canadian Forces Disaster Assistance Response Team (DART) began delivering construction supplies by air and sea to the remote island of Olotayan, off the coast of Panay, on 29 November. The island, with 987 residents, is accessible by only a boat, a trip that can take up to three hours.

DART “Griffin” dual-engine helicopters are delivering plywood and corrugated galvanized iron (GI) sheets for roofing in a sling tied beneath it. Bamboo for posts and reinforcement is purchased two hours outside of Roxas, from where it is sent to the islands by boats provided by the local government, and then hauled the final distance on 10-wheeler trucks.

However, a month since the typhoon struck some remote areas are still cut off from assistance. Access to more mountainous localities has been blocked by debris, landslides and hampered by a long-standing internal conflict with communist insurgent groups. In these areas the Philippine Armed Forces are coordinating with battalion stations nearest the affected communities to act as a drop-off and liaison point. “From here, the goods are carried by hand, on foot, one-by-one,” said Lt Col Rommel Pagayon, international group liaison of the Philippine Army for Task Force Haiyan.

“[With naval support], we are still very actively searching for islands to identify those that may still need assistance or received only one-drop assistance,” said WFP’s Honnorat.

According to the UN Humanitarian Response Depot, which includes six facilities with emergency goods stockpiled worldwide, up to 6 December, some 1,400 tons of food and non-food relief goods worth $7.6 million had been dispatched in the Philippines.