Vicious inter-communal violence, an ongoing rebellion and reports of state-sponsored human rights violations have left more than 100,000 people in desperate need in South Sudan's Jonglei, the largest and most densely populated of the country's 10 states.

IRIN has put together a briefing on the recent violence, its impact on the population and prospects for peace.

Located in South Sudan’s east, Jonglei suffers from a dearth of basic infrastructure such as roads, as well as chronic insecurity rooted in cattle raids and conflicts over land, water and pasture.

Sudan's second civil war began in Jonglei in 1983. The region is home to six Nilotic ethnic groups: the Nuer, Dinka, Anyuak, Murle, Kachipo and Jieh. The Dinka and Nuer are numerically and politically dominant in South Sudan.

Jonglei’s lack of infrastructure has greatly limited the interest of external investors; French oil giant Total has been unable to explore its concessions there, and mining and conservation groups competing for interests along a mineral and migration belt there have fled due to instability.

Broadly, the conflict pits two communities against each other: the Lou Nuer and other Nuer groups in northern Jonglei, versus the Murle, a minority group based in Pibor County, in the south. The Murle originally migrated from Ethiopia to southeastern Jonglei hundreds of years ago, before moving further north and settling around Pibor, displacing the Nuer and Dinka.

In 2011, some 8,000 men and boys from the Lou Nuer and some of the largest Dinka ethnic groups joined forces under the resurrected banner of the White Army - local defence units initially set up in Upper Nile State in the early 1990s to protect Nuer cattle and property. The White Army had been allied to Khartoum through their affiliation with the breakaway rebel forces of Riek Machar during the civil war with Sudan, but the group declined following the signing of the 2005 Comprehensive Peace Agreement (CPA) between Sudan and South Sudan. The White Army reformed in late 2011, according to local media, in order to "wipe out the entire Murle Tribe on the face of the earth as the only solution to guarantee long-term security of Nuer's cattle".

Observers say as many as 11,000 Nuer fighters were seen - following the violence this July - heading back home from the battlefields.

What drives the conflict?

The current animosity stems, according to a 2012 paper by Diana Felix da Costa, a researcher and PhD student at London’s School of Oriental and African Studies, from competition for control over water and grazing land, and has been “aggravated by a legacy of civil war, the widespread militarization of society and broad availability of small arms”.

"Conflicts have become more violent, and no longer follow social rules the way they used to, with a rising number of deaths and displacement of fighters and civilians"

Rival groups in Jonglei have a long history of raiding each another's cattle, and arming themselves to defend against such raids. Recent years have seen an increasing sophistication in the retaliatory cattle raids, with the use of satellite phones, modern weapons and military tactics.

Deaths resulting from these raids have also risen, and clashes have evolved from targeting only armed youths to attacking - or abducting - members of rival communities, including women, children and the elderly. According to Felix da Costa, “conflicts have become more violent, and no longer follow social rules the way they used to, with a rising number of deaths and displacement of fighters and civilians”.

Jonglei has experienced higher levels of violence than other parts of South Sudan; the 2011/2012 clashes claimed around 1,500 lives in the state.

Security experts and Murle leaders also say officials at the local, state and national level and security forces have funded the conflict and have returned Nuer weapons seized during several disastrous disarmament attempts.

Findings of a Jonglei committee formed by South Sudan's President Salva Kiir Mayardit to investigate crimes and abuses have never materialized, and there has been almost no punishment for security forces following alleged human rights abuses against the Murle.

The torture, rape, murder and beating of civilians in Pibor County following early 2012 attacks and under the guise of disarmament forced many Murle youth to flee towns, taking their guns with them.

Many of those fleeing ran straight into the arms of Murle rebel leader David Yau Yau. Yau Yau first started an armed rebellion in 2010 following a local election in which he was defeated by a Sudan Peoples' Liberation Movement (SPLM) candidate; he signed a peace agreement with the government and laid down arms in 2011, after which most of his troops were integrated into the Sudan People's Liberation Army (SPLA). In April 2012, the SPLA announced that he had defected; soon after, he launched a second rebellion, and according to a recent report by the research group Small Arms Survey, as many as 6,000 Murle youths have joined his ranks to attack the SPLA, reportedly with support from Khartoum.

Some of the wounded Nuer that IRIN spoke to said they went to fight Yau Yau as well as to settle scores with the Murle over cows.

Other contributory factors to the Murle’s fight against the SPLM are a scarcity of central government authority, security, development and justice mechanisms, as well as a change in social fabric that has left elders with much less influence over the youth, many of whom are being initiated into combat at a very young age. Felix da Costa points to the “weakening of traditional authority and dispute resolution mechanisms, the manipulation by local and national elites of local grievances and ethnic identities, and the absence of formal state-provided security”.

The Murle have long felt discriminated against, side-lined on development projects and under-represented politically. The national government has just one Murle minister and one Murle presidential advisor, but they claim to have little power at state government level. Leading cabinet members have called them "a pest", "a nuisance" and talk of a "Murle solution" to curb the violence in Jonglei.

What are the effects of the recent violence?

So far, aid agencies say that they have treated around 250 Lou Nuer combatants, who were picked up by the UN Mission in South Sudan on July 14 from Manyabol, where other fighters brought them to the army and requested UN and government helicopters for medical evacuation. According to the South Sudan Red Cross, about one-third of the wounded Lou Nuer fighters are children.

Suffering a gun shot wound to his ankle, Diel, 28, is one of 144 Lou Nuer who were evacuated from Manya Bol to Bor hospital in Bor town, Jonglei state, South Sudan, Monday July 15, 2013. Fierce clashes between rival ethnic groups have again exploded in ea 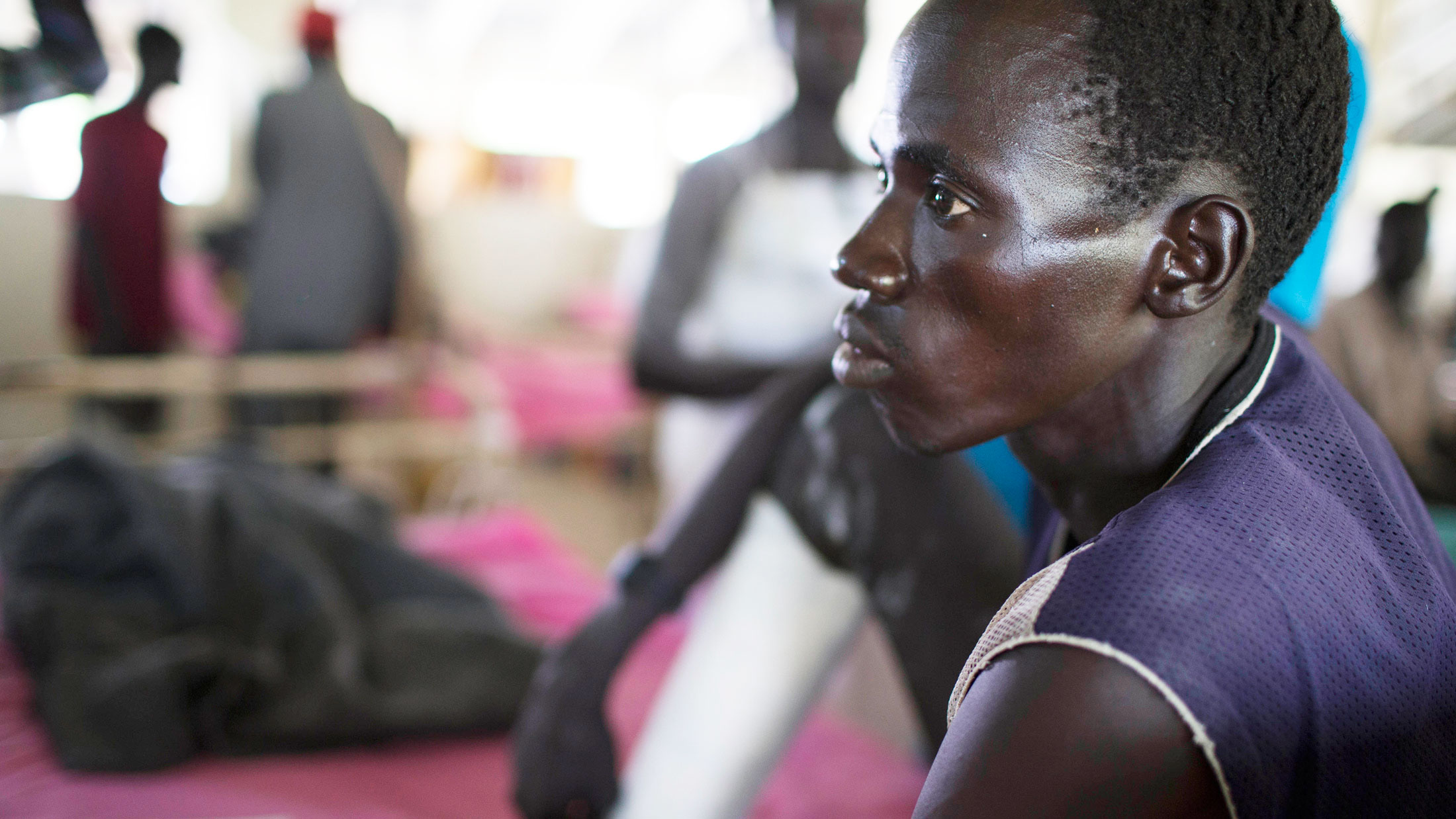 The wounded say they buried their dead, of whom there were many, and that many died on the other side too. No Murle casualties have been treated due to access issues and people's fears of more abuses in urban centres that have become garrisons.

At least 120,000 people who fled to the bush are in need of basic food, shelter, water and healthcare, with many surviving on just wild fruits and leaves. The government and army had blocked humanitarian access for around six months, but allowed aid agencies in on 14 July to help around 25,000 people in three villages and to feed a few thousand civilians creeping back in to heavily militarized towns for aid.

Agencies have reported that tens of thousands of people face severe food insecurity as they hide in the bush, cut off from aid.

Murle politicians estimate that tens of thousands of cows have been stolen, while aerial images show houses razed or burning.

Without cows, many families are destitute, with little or no ability to rebuild economic security. The increasing attacks and level of brutality against women, children and elderly people have also led to widespread trauma and bitterness that could escalate the violence.

Who is protecting the civilians?

The UN Mission in South Sudan (UNMISS) says it does not have enough soldiers to protect civilians outside of Pibor town and Gumuruk, where around half its combat-ready troops are based.

It has repeatedly called on the government to carry out its duty to protect civilians, but the state has said it lacks the capacity to stop so many men despite boasting some 300,000 security forces members. The military has said that it is busy fighting Yau Yau or that its men are stuck in barracks following attacks, and that to come out would be suicidal.

What is being done to prevent more violence?

The violence is thought to be over for now, but not much has been said about what happens next.

There has been little in the way of dialogue between rival groups, despite repeated appeals by religious leaders, community elders and aid agencies, and it is unknown whether anyone is tracking or pursuing the raiders.

Experts say continued violence could be curbed if Yau Yau accepted an amnesty deal offered by Kiir, and if a 2012 peace agreement signed by the Jonglei’s communities was implemented - which includes increased development and infrastructure in the state.