Ahead of Sri Lanka's planned provincial election in a former war zone, the country's main ethnic minority Tamil party is pushing to have as much power devolved from Colombo as possible.

The island nation has grappled for decades with the question of the devolution of power to its nine provinces, particularly the Northern and Eastern provinces, considered by Tamils to be their homeland.

In the early 1980s Tamil frustrations at what they perceived to be discriminatory tactics employed by the state led to the growth of a militant movement and a 26-year civil war that lasted until May 2009, when government forces defeated the separatist Liberations Tigers of Tamil Eelam (LTTE).

"The issue really is the extent of executive powers the [presidentially appointed provincial] governor will be sharing with the [provincial] board of ministers," Abraham Sumanthiran, an MP from the Tamil National Alliance (TNA), said recently. TNA is the largest national party representing minority Tamils from the north.

"We would certainly want the maximum amount of access to power," said TNA leader Rajavarotiam Sampanthan.

Though no election date has so far been fixed, Sri Lankan President Mahinda Rajapaksa indicated plans to hold the election for the Northern Provincial Council in September. If held, it would be first provincial poll there since the end of the civil war.

The Provincial Councils were set up in 1987 to devolve power to the country's nine provinces, especially to the north and east with their sizable communities of Tamils and Muslims.

Analysts have noted the key to an enduring peace is a political settlement that confers power devolution to the Tamil and Muslim communities, which have reported being marginalized by the governing Sinhalese ethnic majority.

The Northern Council - in the heart of the former conflict zone and where the Tamil ethnic minority is concentrated - is the only council of all the provinces that has not had elections since provincial boundaries were redrawn in 2006.

Under the constitution, the presidentially appointed provincial governor determines the powers - and access to national budget resources - of provincial councils.

Sampanthan said two recent governor appointments in the Northern and Eastern provinces, both retired military officials, set a bad precedent. "They are a law unto themselves," he said, accusing them of deciding on provincial affairs without consulting locally elected representatives.

TNA officials said a provincial council can help accelerate the region's development. While elections themselves cannot bring about any change, said Sampanthan, "they could provide the environment in which there can be an improvement."

Despite more than four years of peace, and work on large infrastructure projects like roads, power and irrigation, more needs to be done in the former war zone, especially on income generation and permanent housing.

Outside a war-damaged building in northern Sri Lanka. Civilians in the former war zone say that there are far more important issues facing them than September's upcoming provincial elections 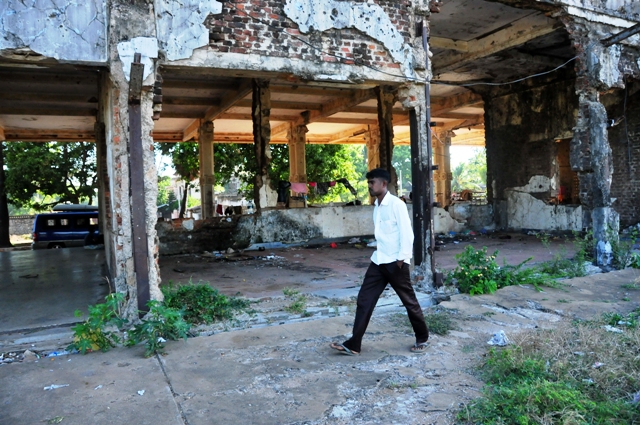 There may be other benefits for the national government if it works more closely with a provincial administration in a former rebel-controlled area, he added.

"If you [the government] are seen to be working with us and there is a substantial improvement in the living conditions in the north and east, you will diminish the gravity of the accusations you are facing today," he said.

Holding provincial elections in the north has been a key request by international powers, including regional heavyweight India, which has a large Tamil minority and where many Tamil refugees fled.

Sri Lanka has faced international scrutiny over its conduct of the final phase of the war and allegations of rights abuses. In March the UN Human Rights Council passed a second resolution seeking action by Colombo to address the allegations.

Local analysts are, however, not optimistic the government will devolve far-reaching powers to the provincial administration - especially one controlled by an opposition party like TNA, which has openly criticized state policies on reconstruction and reconciliation.

Jehan Perera, executive director of local NGO National Peace Council, said the government is trying to take away constitutionally granted - but thus far unimplemented - provincial decision-making powers over police and land. "It will not try to give more powers to a council that is not controlled by it or allies," he said.

There is also mounting pressure within the government against holding the election in the north, and to narrow the scope of powers in all provincial councils.

The National Freedom Front (NFF), a ruling coalition partner, has launched a public campaign to gather a million signatures to remove police and land powers from the local councils.

In addition, NFF leader and Minister of Construction, Engineering Services, Housing and Common Amenities, Wimal Weerawansa, said NFF will continue efforts to repeal the constitution's 13th amendment, which established the provincial councils. "They [the councils] can destabilize the country if a province takes arbitrary decisions."

Meanwhile, the planned local poll has generated little enthusiasm among some Northern Province residents, especially in the areas worst affected by fighting.

"Elections are good, but we have far more urgent issues," said Nishanthan (one name only), a first-time voter from the northern town of Kilinochchi.

"We need houses, water, electricity and jobs. Then we can think of elections."