Unemployment, poverty and political marginalization are contributing to the Islamic radicalization of Kenya's youth, a situation experts say must be addressed through economic empowerment and inclusive policies.

Youth unemployment is extremely high, as are levels of political disenchantment. An estimated 75 percent of out-of-school youths are unemployed, according to the US Agency for International Development (USAID).

"The unemployment crisis is a ticking bomb. Over 60 percent of the population is under 25. You cannot ignore that," said Yusuf Hassan, the Member of Parliament for Nairobi’s Kamukunji Constituency, which has a large Muslim population. "A huge and significant population is restless. And the gap between the rich and poor is getting wider."

"When access to resources is based on ethnic, cultural or religious characteristics or there is a growing divide between the 'haves' and 'have nots' in countries and communities, economic conditions further contribute to instability," says a new report by the Institute for Security Studies in Africa (ISS). "Countries confronted by large differences between 'haves' and 'have nots' are additionally vulnerable to conflict, which may include resorting to acts of terrorism."

A string of grenade attacks - some allegedly by Somali Islamist insurgent group Al-Shabab or their sympathizers - have occurred in the Kenyan towns of Garissa, Mombasa and the capital, Nairobi, since Kenya began its military incursion in Somalia in October 2011.

But Islamic radicalization is not new to Kenya. Kenyans were involved in the 1998 US embassy bombings in Nairobi and the Tanzania city of Dar es Salaam; the coordinated attacks, which killed more than 220 people, were Africa's first suicide bombings by Al-Qaeda's East Africa cell. In a 2002 dual car-bomb and suicide attack on a hotel and plane in Mombasa, at least one of the suspects was Kenyan.

Muslims make up an estimated 11 percent of Kenya’s population; large Muslim communities can be found in the country’s northeast and in the coastal region. Traditionally, Kenya’s Muslims are moderate, with the community peacefully seeking participation in politics. But ISS pointed to the historical political marginalization of Muslims - right from negotiations for Kenya’s independence, in which ethnic Somalis, who are overwhelmingly Muslim, were not represented - as a contributor to the radicalization of young people.

“Although Kenya is a secular state, it is essentially a Christian country because of the dominant Christian population… There is the perception that Islam is ‘alien’, despite the fact that it came to Kenya before Christianity,” the report notes.

The report also found that some young Kenyan Muslims have been influenced by radical preaching, which leads them to believe that wars being fought against Muslims abroad - for example, in Afghanistan and Iraq - are part of “a global campaign against Islam”.

According to a 2011 report by the UN Monitoring Group on Somalia and Eritrea, non-Somali Kenyan nationals constituted the largest and most organized non-Somali group within Al-Shabab.

"We've already seen the rumblings of 'Pwani si Kenya' [Coast is not Kenya, the slogan of a separatist group in Kenya’s Coast Province] - radicalized, marginalized, poverty-stricken young people are saying, ‘we don't belong to Kenya’," said Hassan, who was seriously injured in a 2012 grenade attack in his constituency.

The ISS report found that Islamist militants were exploiting sub-standard socioeconomic conditions, and the government's inability to provide basic services, by positioning themselves as providers of assistance. "Creating or infiltrating bona fide charity organizations... is a sure way to win the general support of ordinary people," the report said.

The report points to the growing influence of the Muslim Youth Centre (MYC), a Kenyan group whose objectives include promoting community health and social welfare, but which also advocates "an extreme interpretation of Islam and prepares members to travel to Somalia for 'jihad' [holy war], thus attracting the attention of security agencies in Kenya and abroad." According to the UN Monitoring Group on Somalia and Eritrea, Al-Shabab announced a merger with MYC in 2012.

Hassan Sheikh, a cleric in the northeastern town of Garissa, said extremist groups have taken control of many mosques and Islamic schools, setup orphanages, and employed teachers and imams.

"North Kenya is a hub for mercenaries. You can easily get [attract] them - it’s out of poverty,” said Khalif Aabdulla, a civil rights activist from Wajir, also northeastern Kenya.

NGOs and government officials in Kenya acknowledge an urgent need to develop a counter-radicalization policy to prevent young people from turning to violent groups, and some say Kenya’s newly elected government may be an opportunity to tackle the issue. NGOs say the government must do more than promote economic empowerment among marginalized communities; it must also foster a sense of belonging.

"There are some efforts to use the Council of Imams or Islamic Preachers' Association to talk to the youths," said Mwalimu Mati, CEO of governance watchdog Mars Group Kenya. "The moderates are trying to assist the government, but I can't say it's a complete success."

"The problem is exacerbated by counter-terrorism programmes by the Kenya police who carry out mass raids rather than targeted arrests. It keeps the youths feeling repressed generally. They then identify that as oppression based on religion," Mati said. He says the problem is primarily in North Eastern District, Eastleigh and Coast Province.

The ISS report describes the current approach as "collective punishment based on perceptions".

A young boy walks past a wall with the slogan of Kenyan separatist group, the Mombasa Republican Council, "Pwani si Kenya", which means "the Coast is not Kenya" 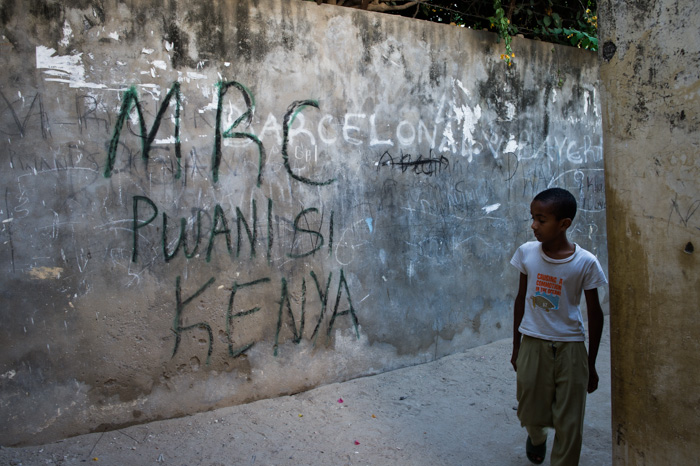 "Most perceptions are completely wrong, especially that Somali nationals are responsible for attacks in Kenya or that Kenya is an innocent bystander when acts of terrorism are committed on its soil," it stated.

Following attacks in Nairobi, ethnic Somalis - both Kenyan and foreign nationals - said they experienced xenophobia and lived in constant fear of arrest.

Under the government of former president Mwai Kibaki, both the Ministry for Peace-building and Conflict Management and the Ministry for Education told IRIN that they had no programmes to address radicalization.

The Ministry of Youth Affairs and Sport said they ran "empowerment programmes" in conjunction with the formal education system. But as Leah Rotitch, a director in the education ministry, said, "The people Al-Shabab target are normally young people who are out of school."

The persecution felt by ethnic Somalis and other Muslim communities has only increased in recent years, with police allegedly engaging in extrajudicial use of force and even killings of terror suspects; the police deny these claims.

"Since the passing of the new anti-terror bill, we have seen a huge spike in extrajudicial killings. And terrorism has become an easy label," said Horn of Africa analyst Abdullahi Halakhe. "Such efforts only succeed in alienating the local population, who usually have critical human intelligence. They are turning the Islamic radicalization of young people into a matter of national security, making those young people their enemies, thus making it worse."

The ISS report calls for "introspection on the part of the police officer stopping and searching a person because he looks Somali".

Tom Mboya, who established the Inuka Kenya Trust in response to the role young people played in perpetrating the post-election violence of 2007-2008, says now is an opportunity to engage the youth. "They're what should be the engine of this country," he told IRIN.

"Devolution is positive," he says, referring to the process of decentralizing power from Nairobi, which was set in motion by Kenya's new constitution. Mboya believes this process will create opportunities for young people. But, he says, "in parts of the country more prone to violent extremism, there needs to be policy in place. The leadership will have to be more alive to that problem".

A focus on young people formed a key part of new President Uhuru Kenyatta's election campaign - his government will now have to work out an acceptable and effective approach in tackling the issue of violent extremism.

Mars Group's Mati says using moderate imams to neutralize potentially radical youths does not work because young people no longer regard them as credible. "It's a generation gap - control over youths has somehow become difficult. In the old days, what an imam said went. The radical preachers are young," he said.

Hadley Muchela, programmes manager for Kenyan rights group Independent Medico-legal Unit, says targeting violent extremism will require sensitivity because, thanks to the way the issue has been handled in the past, it is often seen as an indictment against all of Islam. "You find very few Kenyans willing to go into it," he said.

Abdikadir Sheikh, who works with the Sustainable Support and Advocacy Programme, a local NGO, said the group has set up a pilot project to dissuade youth in the northeastern towns of Dadaab and Garissa from joining extremist groups.

"We are very careful or [we could] lose our lives; you can’t confront radicalization directly - you need different approaches," he told IRIN. "We have established a strong team of more than 600 youths… some have so far joined colleges. We plan to work with the county governments.”
The ISS report warns that "there is no quick fix for the level of radicalization seen in Kenya".

"The biggest threat to stability in Kenya will be if extremists succeed in dividing Kenya between Muslim and non-Muslim," the report said.