Organizers of the Mogadishu Music Festival, a string of events held last week in the Somali capital, hoped to inaugurate a new era of openness and development in the war-scarred country, and to lure impressionable youths away from radicalism.

The festival was Mogadishu’s first major public music event since civil war erupted two decades ago. The war had culminated in the rise of Al-Shabab, an Islamic militant group that outlawed music entirely.

Although Al-Shabab was driven from Mogadishu in 2011, they remain an active threat, claiming responsibility for recent bombing attacks in the capital.

“There are two types of threat from Al-Shabab: one is real, one is psychological,” said Farah Abdullahi, the general manager of Kau Media Corporation, which filmed one of the festival’s concerts for national broadcast. “Sometimes they’re not doing anything, but everyone is scared.”

For Abdullahi, broadcasting the event was an important signal to the country: “Eventually people will realize they’re scared of something that’s not a reality. Then they will be confident enough to stand up to them. I want to show Shabab and the people who believe in them that they’re defeated.”

The festival, funded by the UN Development Programme (UNDP) and the US State Department, brought in musicians from seven countries. According to organizers, some 2,000 young men and women attended the event, and Abdullahi’s live broadcast reached a national and international audience of 300,000.

The festival’s logistical challenges were compounded by the absence of a local music industry - all equipment had to be brought in from Somaliland, the self-declared republic to the north - and the continued influence of Al-Shabab.

“Al-Shabab knows where this is. They’re still part of the system, part of the community,” Abdullahi said.

Abdullahi is one of many Somali businessmen to return from abroad, breathing life into the economy. He spent much of his life in the UK, but is now based in Hargeisa.

Abdullahi hopes events such as this will help Somalia redevelop its once-thriving private sector.

“It was one of the best cites in the world,” he said of Mogadishu in the 1960s. “Very cheap, very peaceful, the best nightclubs in the world, beaches and drinks.”

“If Al-Qaeda and terror networks around the world can find ways of uniting Somali, Afghan, Sudani, Chechen, Arab, and other youth around extremism, killing and hate, why can’t we do better by uniting youth around moderation, reconciliation and love through music and arts?” asked Daniel Gerstle, founder of the Humanitarian Bazaar, which co-produced the festival.

Gerstle is sceptical of “human rights” concerts - such as those popularized by Bob Geldof and Peter Gabriel in the 1980s and 1990s - that reach only Western audiences. Instead, these initiatives should target the young men most at risk of violent extremism, he says.

“Who sits down with them - the boys who are the participants, the fuel for continuing this conflict? The extremists,” Gerstle said.

Bill Brookman, an artistic consultant hired by the United Nations who partially funded the festival, breathes fire at the International Solidarity Concert on March 29, 2013, as part of the Mogadishu Music Festival in the Somali capital 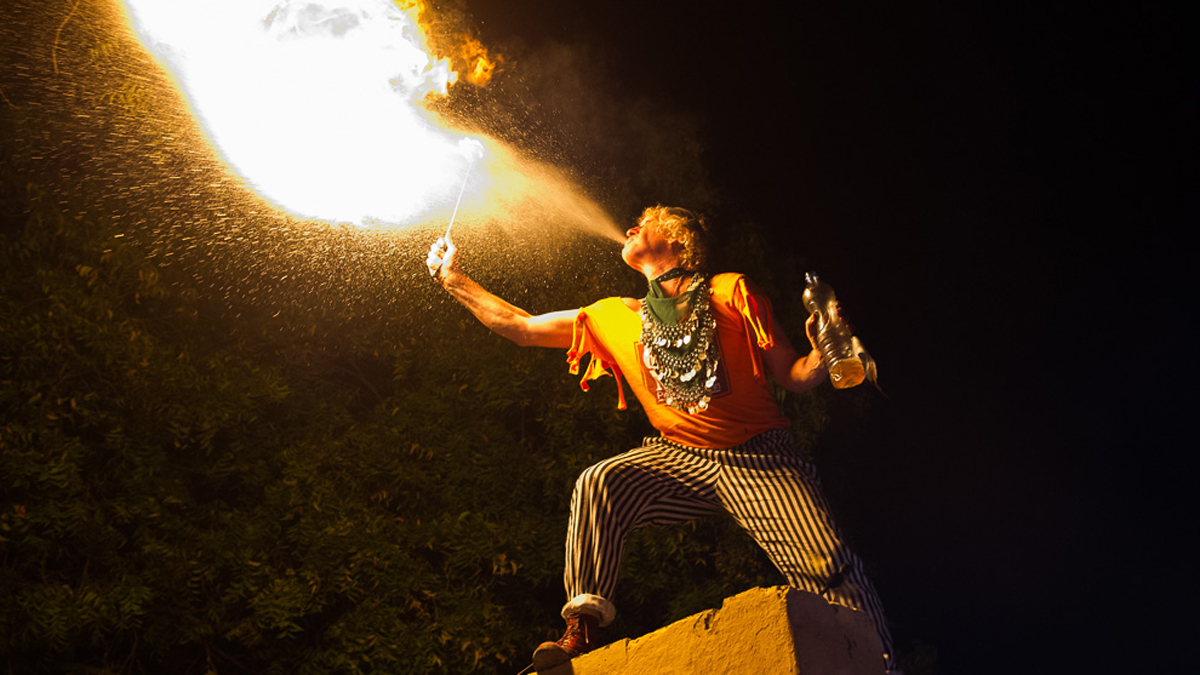 Headlining the event was Somali hip-hop collective Waayaha Cusub, whose lyrics are known to address the country’s issues head-on: one of their albums is titled “No to Al-Shabab”.

“We’re here to spread the peace message,” said Kombo Chokwe of Afro-Simba, a Kenyan band at the festival.

As part of the event, former Al-Shabab fighters and child soldiers took part in a “reconciliation concert” organized with the Federal Government.

“[It was a] 400 [person] live audience of former fighters who defected or were captured and are in demobilization before reintegration,” Gerstle said.

One of the festival’s managers, Bill Brookman, calls such arts initiatives “the peace dividend”.

These programmes can promote post-conflict recovery in a variety of ways. For example, in 2005, Brookman helped implement street-theatre in Sierra Leone sensitizing the public to the dangers of explosive remnants of war.

“Three brightly painted vehicles, [with] actors, musicians and artists entered the most hotly contested slum areas where gangs ruled,” said a report of the foundation. The artists’ presence helped initiate negotiations with gang leaders, it said.

But these efforts carry enormous risks.

Organizers of the Mogadishu festival are now closely monitoring the safety of fixers, drivers and producers associated with the event, out of concern they may become targets for Al-Shabab. One man, who has received threats, says he is prepared to leave the country should the need arise.

“I thought, ‘Is it a bit premature to do an event like this?’” said a Mogadishu resident, who asked not to be named. “It’s do or die. Either they’ll do something that’ll break the mould, or they’ll put us back by five years.”