Who or what do you blame when the price of maize seems to keep going through the roof? If you did not mention fuel subsidies, then you need to read this list of emerging food issues in Africa.

“The current low stocks for both wheat and maize are a reason for concern because even small shocks could cause panic and speculation in international markets and contribute to price volatility,” said Gary Eilerts, programme manager of the Famine Early Warning Systems Network (FEWS NET).

Maize supplies are tight because of the 2012 drought in the US, the world’s largest maize exporter. Drought in Russia in 2012 has also affected the global wheat supply. “Prices will remain high in the coming months and [are] vulnerable to evolving global market conditions,” said Eilerts.

Regionally, Southern Africa - where maize is the main staple - is the most dependent on maize imports, says Liliana Balbi, team leader of FAO's Global Information and Early Warning System (GIEWS). "Several countries rely on imports from the sub-region’s main producer and exporter, South Africa, where prices reflect trends in the international market in addition to internal supply/demand conditions."

Expensive maize in South Africa in the second half of 2012 has led to high prices, particularly in Lesotho and Swaziland. But "rising maize price trends in other countries, such as Malawi and Mozambique mainly reflect domestic dynamics," she said.

In Eastern Africa, Kenya and Somalia rely mostly on the regional export markets, such as Uganda and Tanzania, Balbi explained, so they are unaffected by the international markets.

Wheat exports from the US have also been affected, as some of its wheat has been locally diverted as a substitute for maize to feed animals.

Though high, global maize and wheat prices have remained stable thanks to increased supplies from southern hemisphere countries, like Argentina, Brazil and South Africa, which harvest in the second half of the year.

Emergence of the south: The future of cereal prices is not necessarily bleak. “I am very excited about the resumption of large wheat exports from India - which is about 6.5 million tons - and record maize shipments from Brazil of 22 million tons that are easing the global grain supply/demand situation,” said Abbassian.

“India and Brazil have played pretty important roles in international commodity markets as net exporters this year. It will definitely be interesting to see how their export position evolves in global staple food markets,” said Eilerts.

Lower global stocks of wheat have also been offset by higher stocks in Iran, South Korea and Ukraine, according to the US Department of Agriculture.

Malawi is already dealing with the repercussions of replacing its fuel price subsidies with “automatic fuel price adjustments”, in which prices automatically reflect changes in global fossil fuel prices, explains economist Charles Jumbe, of the Centre for Agricultural Research and Development in Malawi.

Private traders of maize, the country’s staple, are transferring the now-record high costs of fuel to consumers.

Cameroon, Chad, Guinea and Nigeria have all moved towards cutting fuel subsidies. There is increasing pressure on Ghana from its own central bank to remove subsidies.

Malawi: The price of maize in Malawi is up by an average of 20 percent from December 2012 to January 2013. The prices are 69 percent “higher, on average, than their respective January 2012 levels,” said Eilerts.

"In Malawi, prices of maize, in nominal terms, reached new records in January 2013 that were 25 percent higher than the previous record in February 2009," said FAO's Balbi.

These prices have been driven up by a variety of factors. The Malawian economy experienced two major shocks in 2012, Eilerts points out: an initial 50 percent devaluation and subsequent depreciation of the Malawian currency, the kwacha, and a production shortfall in the southern region of the country. These increased the costs of imported fuel and fertilizers, decreasing the cost of locally produced commodities like maize.

The kwacha, which had depreciated by almost 100 percent against the US dollar by the end of 2012, made Malawi’s maize attractive to buyers in neighbouring Tanzania and Mozambique, which had experienced poor harvests. The high demand has caused the maize price to skyrocket in Malawi, even in spite of an export ban. (The removal of the country’s fuel subsidies has also had an impact on maize prices.)

Government regulations have helped keep maize in the country, but efforts to control prices do not work, said economist Jumbe: “In theory, the government sets producer prices, but on the ground, supply and demand forces play a major role. “

A seller runs his hand through his stock of maize at Ihil Berenda, the wholesale grain market in Addis Ababa, Ethiopia 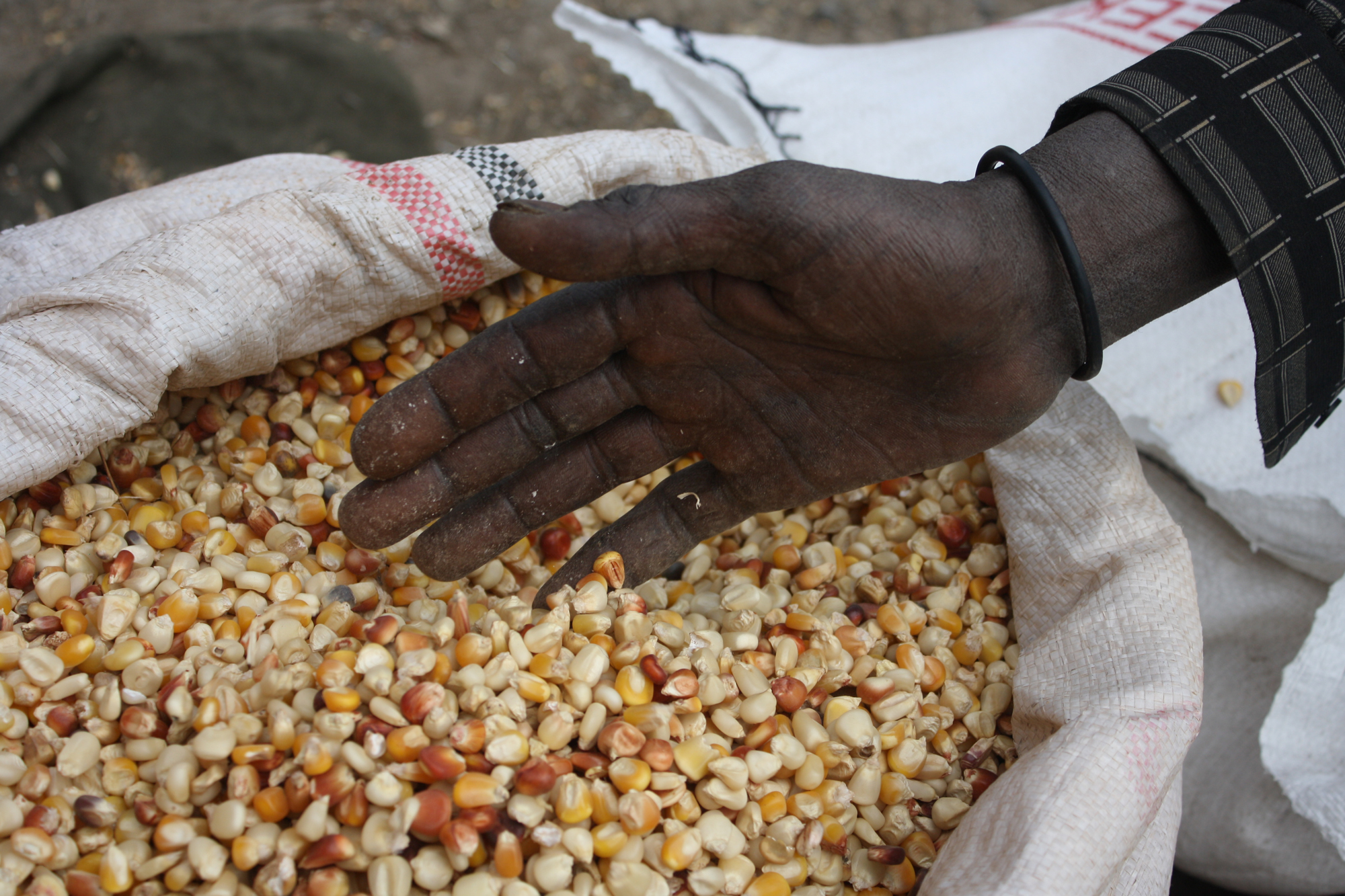 The flow of maize from the country’s National Food Reserve Agency also does “not appear to provide a cushion from the high-flying maize prices as expected,” he says.

Rains in the next cropping season, from October 2013 to May 2014, will be critical to help the country’s stocks. But cash transfers and targeted food assistance by the government, the UN and partners are helping to ease the situation.

Rice in the Sahel: Global rice stocks are adequate, and prices in the major exporting countries are either stable or declining, says Eilerts. This has helped markets in the Sahel, where rice is consumed in larger quantities than the rest of Africa. Governments, particularly in Niger and Senegal, are also providing input subsidies to boost local rice production and enabling periods of duty-free rice imports, he added.

"With that said, imported rice prices have gradually increased in Mauritania and Ghana since 2011, due to the persistent depreciation of the Mauritanian ouguiya and the Ghanaian cedi between July 2011 and December 2012. Some price increases of imported goods, such as rice, occurred in Mauritania, also as a result of continued increases in fuel prices, which make transport of foodstuff costly."