Inadequate funding, a shortage of health staff and poor adherence to vaccination schedules are some of the reasons for declining immunization levels in Uganda, which experts say threatens efforts to reduce preventable deaths among children.

Uganda’s national measles immunization coverage declined from 71 percent in 2006 to 55 percent in 2010, according to the UN World Health Organization (WHO) and the UN Children’s Fund’s (UNICEF) 2011 estimates.

“Routine immunization decline is due to health system issues that are affecting the entire health delivery, including limitations in the resource envelope, low staffing levels, inadequate capacities to manage the available resources, [and] vaccines- and related supplies-distribution challenges from national to district to operational levels,” Eva Kabwongera, the technical officer in charge of immunization with UNICEF in Uganda, told IRIN.

“The main challenge has been establishing an immunization programme that can function smoothly year after year as part of solid primary healthcare systems.”

Major childhood diseases in Uganda include measles, tuberculosis, poliomyelitis, pertussis (whooping cough), diphtheria, tetanus, hepatitis B, Haemophilus influenzae and neonatal tetanus. But some 48 percent of children under the age of five are un-immunized or under-immunized - meaning they start immunization but do not complete the schedule - according to the 2011 Uganda Demographic and Health Survey.

“The re-emergence of these diseases in Uganda is due to accumulation of non-immunized children because parents and caretakers have not been taking the children for immunization,” said a government statement.

Between 2000 and 2007, the percentage of children receiving the final dose of the DPT3 (diphtheria, pertussis, tetanus) vaccine increased from 56 percent to 85 percent under Uganda’s Expanded Programme on Immunisation (EPI). Investments into the programme, including from the GAVI Alliance and Sustainable Outreach Services, contributed to that success, according to the ministry’s Health Management Information System report.

But Uganda’s budget support for the EPI subsequently decreased by more than half - from 7.7 percent in the 2006-2007 financial year to 3.6 percent in 2009-2010. And recent challenges in routine immunization service delivery have resulted in reduced vaccination coverage, with DPT3 coverage, for example, falling to below 80 percent over the 2007-2011 period.

In rural areas, culture, religion and long distances to health centres are added barriers to immunization.

“There are several new religions in Uganda that mislead our people. Their leaders preach to them not to immunize or treat their children when they are sick.  They believe God will heal them,” Huda Oleru, a member of parliament (MP), told IRIN.

“We have had dialogue [with] Gospel Church leaders in Mbale [eastern Uganda]. For them, they don’t want their children to be immunized. They believe that the immunization vaccines are made [from] wild animals, which will make their children sick.”

According to Philippa Musoke, the principal investigator for paediatric infectious diseases at the Makerere University-Johns Hopkins University Clinical Research Site in Kampala, most of the health centres where immunization services are carried out are very far from people’s homes.

“It requires mothers to have money for transport, which most of them don’t have. People only take children [for immunization] during national immunization days,” Musoke told IRIN.

“The challenges need to be handled using [a] multi-approach. The Ministry of Health needs to sensitize the community about the benefits of immunization, ensure the services are taken nearer [to] where they can get them easily. We need to use the village health teams to strengthen immunization in the community.” 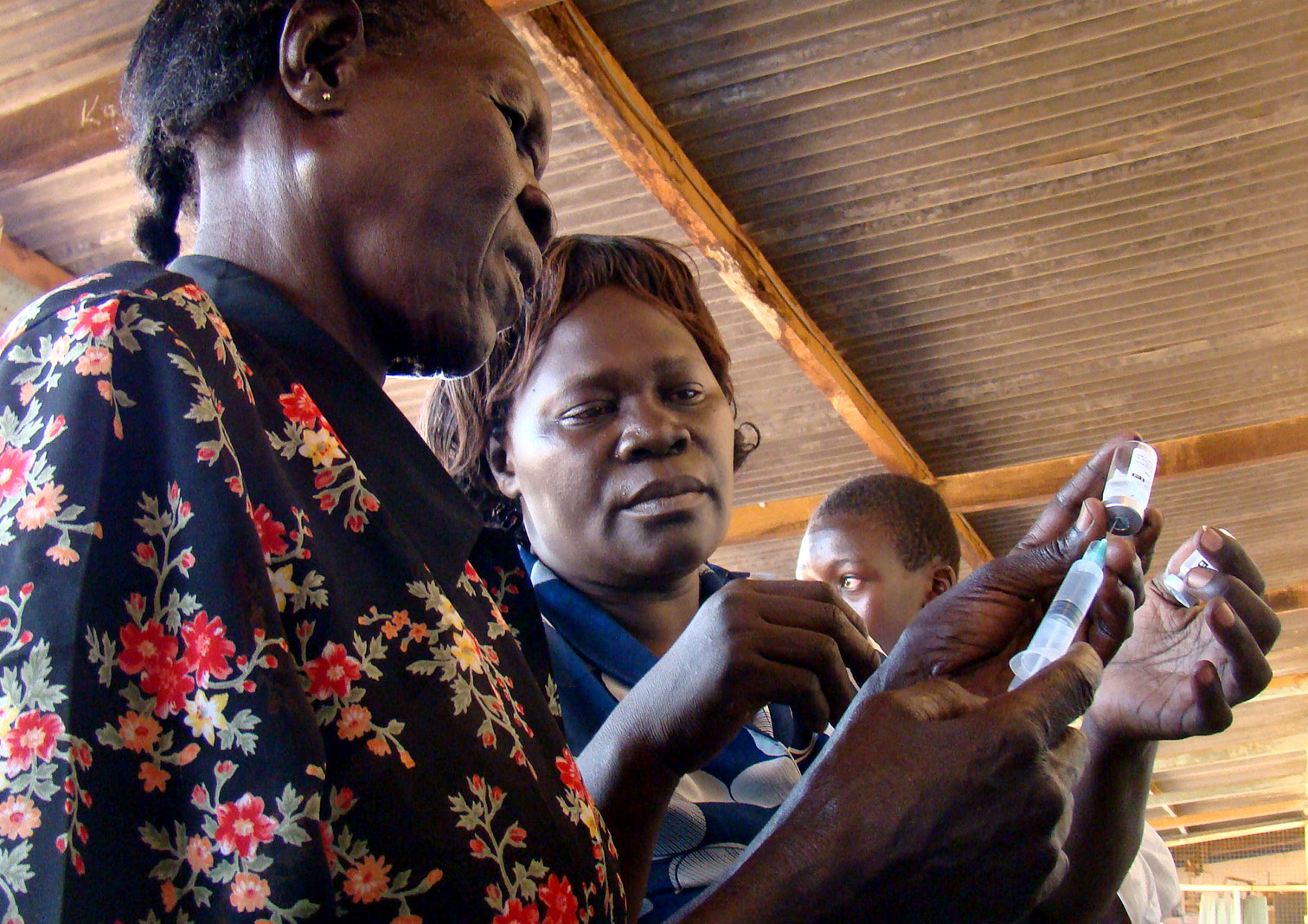 “The current government allocation to [the] health sector is too low, affecting its allocation to key programmes like immunization,” Musoke said. “We encourage the government to increase [the] health budget so that our people, especially children - our future leaders - live a healthy life.”

Gaps in the system

Uganda also risks losing the gains it has made in its national polio eradication programme, according to a November 2012 report, which noted that districts’ surveillance teams lack the training to help track polio and suspected polio cases at health facilities and in villages.

“There are a lot of gaps in the health system, and this requires redress for the country to realize its mandate of eradicating polio,” Joseph Munaba, a member of the Uganda Polio Eradication Team at the health ministry, told IRIN. The team is tasked with improving wild polio surveillance in districts perceived to be at high risk along the Democratic Republic of Congo, Kenya and South Sudan borders.

A monitoring visit in the northern Agago District in 2012 revealed that health centres there lacked essentials items, including containers for collecting specimen from suspected polio cases, and that health workers also lacked necessary knowledge, Munaba said.

That many women give birth away from hospitals is also a problem.

“There is a challenge in Uganda where so many mothers in the rural villages do not attend antenatal care, and their children miss out [on] immunizations. This presents a dangerous situation because Uganda is bordered by countries with reported cases of wild polio,” Emmanuel Tenywa, the WHO northern Uganda regional officer, told IRIN.

Uganda had been polio-free since 1996, but recorded a re-emergence of the disease in 2009, when eight cases of wild poliovirus type 1 were reported in the northern districts of Amuru and Pader.

On 20 November 2012, MP Oleru submitted the Immunization Bill 2012, which seeks to impose penalties and fines on parents and guardians who fail to take their children for routine immunization against the major childhood diseases.

“The decline of immunization in Uganda is majorly [based] on the attitude of the parents. So we need a law to force them to routinely take their children for immunization,” Oleru told IRIN. “People should support the bill. They shouldn’t look at it as a punishment. We need to protect the children; the future of this country belongs to them.”

Expressing support for the bill, Uganda’s state minister for primary healthcare, Sarah Achieng Opendi, said, “There is no compromise on immunization of our children. As government, we shall support the bill once it comes to the floor of parliament for debate. We want to ensure that every child in Uganda is fully vaccinated with high-quality and effective vaccines against the vaccine-preventable diseases.”

Uganda’s health ministry has established a quarterly national child-and-family day during which immunizations are carried out; it is also partnering with churches and mosques. “With national campaigns and doing immunization during Friday and Sunday prayers, we believe we shall be able to reach 90 percent coverage in immunization from the current 52 percent,” Opendi told IRIN.

The government also plans to introduce the pneumococcal conjugate vaccine to fight pneumonia in 2013. “Having realized that pneumonia is one of the major causes of infant deaths, we shall begin to vaccinate children against the disease,” Christine Ondoa, Uganda’s health minister, was quoted as saying in Uganda’s New Vision newspaper.

Vaccines for rotavirus and human papillomavirus (HPV), which causes cervical cancer, will be introduced in 2014. “If we vaccinate girls when they are still young, we shall be lowering their chances of getting cervical cancer,” Ondoa said. The HPV vaccination campaign is already being piloted in 12 of the country’s 112 districts.