It has been years since northern Uganda's children had to troop to town centres at night for safety from abduction by the rebel Lord's Resistance Army (LRA), and most have moved on from the crowded displacement camps where they were born. But while they can sleep at night and look forward to a peaceful future, their lives are rarely easy.

Over the course of the 20-year-war between the government and the LRA, an estimated 30,000 children were abducted from their homes to serve as fighters, porters and sex slaves and baby-sitters.

"It was a terrible period I will never forget. It was a life of total fear, knowing that anytime you could go [get killed or abducted]," 20-year-old Welsy Ajok told IRIN. "That period [2002-2004], I and couple of other children slept in the streets of [Gulu] town on the bare floor at the shop veranda... Sometimes we heard the gunshots of the rebels raiding the vicinity of the town in the night."

Today, Ajok lives 24km south of Gulu Town, in the village of Patek. She rides a bike to school every morning, after bringing her two children - ages two and five - to an early childhood development centre.

"It's a relief, because our children have a different way of life that looks brighter. They are learning how to do things in school and at home," Patrick Ojwang, another Patek resident, said. "Forget about the LRA days. The children are happy, living a life of no violence - all we have to do as parents is provide a conducive environment for the children to learn and develop."

Yet poverty, harmful cultural practices and inadequate child protection mechanisms - both legal and community-based - continue to exact a toll on children’s welfare.

In Purongo Village, situated along the Gulu-Arua Road, weary children return from labouring on local commercial farms. "That's what I and other children here do during holidays to raise money," said Langol Olango, a 14-year-old pupil at Purongo Hill Primary School. "On a good day, when I harvest a big area of the rice, they pay me 15,000 shillings [about US$5.50], but it's a very tedious kind of work."

Olango spends part of his earnings on his family's basic needs and the rest on school supplies.

Government officials in the north say the region's continued poverty is causing problems for children's education. "Though enrolment is high, the dropout rate is equally high year in, year out. The worst affected are girls," said Charles Irwenyo, the district education officer in Nwoya.

In April 2012, Uganda's Daily Monitor reported that the school dropout rate for girls in Gulu District was 40 percent. Teenage pregnancy is a major reason girls leave school. Other challenges include: long distances between homes and schools; pupil-to-teacher ratios as poor as 60 to one; and lack of an adequate diet.

A visit to health centres in the region revealed a high number of children seeking treatment. Medical workers say some of the common child illnesses are malaria, malnutrition, respiratory tract infections and diarrhoea.

Vincent Ouma, the district’s community service officer for children’s affairs in Gulu, told IRIN that child protection is also a major issue. "It's challenging for district/local government to provide direct support towards such challenges. We rely on the support of nongovernment organizations intervening in areas of child protection," he said.

A girl carrying hoe from garden work in Kitgum district. Children complement garden work with school as they face a new way of life 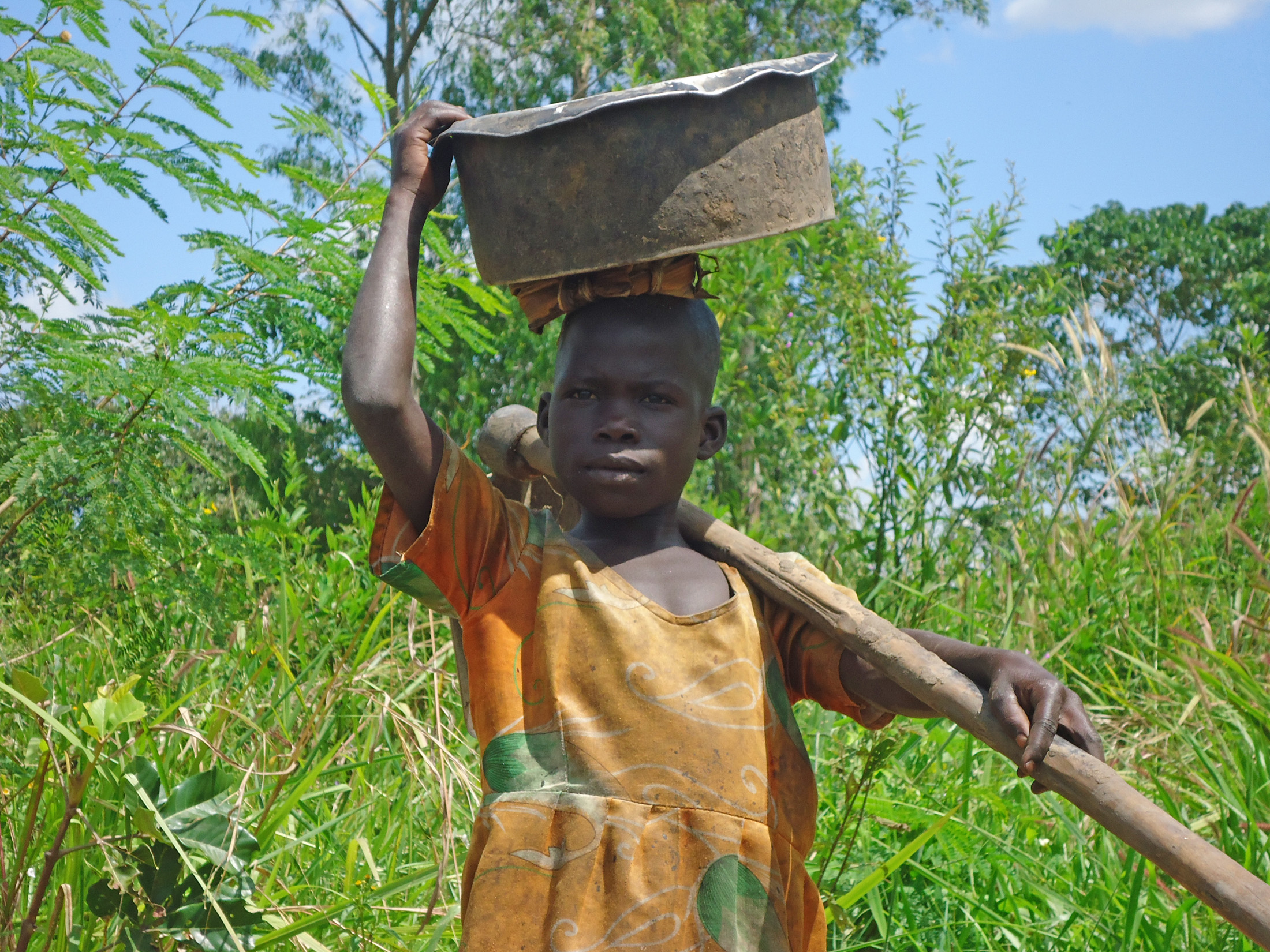 A 2012 report on child protection in the northern Ugandan districts of Lira and Dokolo, by the NGO Child Protection in Crisis, found that major sources of harm include: sexual abuse, child labour, verbal abuse, unfriendly home environments, poverty, as well as harmful cultural practices like early marriage.

The Canada, Holland and UK branches of the NGO War Child are engaged in child protection programmes to keep children from being exploited.

According to Johnson Kilama, the commissioner of police in northern Uganda, much more is needed to address child protection in the region.

"A lot of efforts are being undertaken, but it will take some time for people to understand that there is need to protect children wherever they are. It’s a collective responsibility," he said.