Months into Lebanon’s anti-government uprising and the currency crisis that helped spur it on, people already at the bottom of the economic ladder, including the country’s 1.5 million Syrian refugees, are feeling the pain.

The protests began in mid-October with an outcry over a proposed new tax, but have morphed into a wider movement against the political class.

Lebanon’s economy has been troubled for years, but problems have multiplied since September into a full-blown fiscal crisis that has been one of the factors spurring popular anger, as hundreds of thousands have taken to the streets.

A drop in remittances from Lebanese abroad and the general economic malaise has led to a shortage of US dollars. The Lebanese lira is pegged to the US dollar at 1,500, but the black market rate has climbed to more than 2,000. Meanwhile, banks have imposed strict limits on the withdrawals of both currencies.

“The most vulnerable communities are the ones affected the most, both Lebanese and refugees.”

More refugees are returning (or being deported) to Syria, although numbers are still relatively low. Most who remain work informally and are paid in Lebanese lira or receive cash aid in the local currency. They are finding it harder to make rent, buy food, and access medical care.

Among those struggling is 70-year-old Mitab Hajeej al-Abbas, who apologised to guests in the tent he shares with his wife in a small informal refugee camp in Lebanon’s eastern Bekaa Valley.

“Normally, I would get the small gas burner and put it here next to you and make a cup of coffee or a glass of tea, but now I don’t have gas,” said the Homs native, who fled to Lebanon in 2014. “I tried to refill it and they told me there is none.”

The shortage of cooking gas is a relatively small inconvenience, but it is a symptom of a larger problem that has had far-reaching effects across Lebanese society – including Syrian refugees like Abbas.

“Everyone in Lebanon is affected by the current economic situation, and, unfortunately, in a situation like the one we are going through now, the most vulnerable communities are the ones affected the most, both Lebanese and refugees,” said Lisa Abou Khaled, spokesperson for the UN’s refugee agency, UNHCR, in Lebanon. “For years now, most Syrian refugees have been living in poverty and can barely keep afloat.”

From bad to worse

Even before the most recent financial problems and demonstrations, a newly released UN survey, carried out in April and May 2019, found that around 73 percent of Syrian refugees in Lebanon were living below the poverty line, up from 69 percent the year before, and considerably higher than the estimated 28 percent of Lebanese in the same situation.

Now it’s getting worse, and fast.

While most workers are still being paid at their old wages at the official exchange rate – if they are receiving their salaries at all – prices have climbed, and landlords, creditors, and others frequently demand payments in dollars or at the black market rate.

Because of the changes in the black market rate, his landlord now wants 1.2 million lira for the whole of 2020. That’s a prohibitive sum for Abbas, who has diabetes and high blood pressure, is no longer working, and was cut off from UN assistance a year ago.

“Now, everything is getting more expensive, and everyone wants dollars,” Abbas said.

Abbas doesn’t know why his aid ended, but UNHCR’s Abou Khaled said eligibility is based on socio-economic vulnerability. “We start with the most severely vulnerable and go up as much as we can, according to the resources available,” she explained.

Abbas’s adult children can’t help and are scattered in different countries – Syria, Turkey, and Canada. He said the few who remain in Lebanon are themselves struggling with sporadic work, and with employers who sometimes don’t pay.

The financial challenges many Syrian refugees currently face are compounded by their legal status in the country, as many are unable to obtain work permits and therefore have to earn a living under the table, without contracts.

According to Jad Chaaban, an economist and associate professor at the American University of Beirut, that means their jobs may be the first to be cut by companies struggling in the downturn.

A recent UN report says the current crisis was precipitated by a slowdown in the construction industry, one of the main employers of refugees in Lebanon, while refugees had already lost their jobs due to a crackdown on non-Lebanese working without papers.

“You saw, in a month, double the inflation rate that you saw over one year.”

In 2019, only 59 percent of refugee households reported having a member who had worked in the past seven days, compared to 68 percent in 2018.

In other instances – as has also been the case for Lebanese workers – many Syrians have continued to work without receiving their full salaries, or sometimes with no payment at all. Unlike Lebanese citizens working under a contract, they have no legal recourse.

The economist noted that Syrians may be especially hard hit by fast-rising inflation – Lebanon saw an inflation rate of 10 to 15 percent in December alone, compared to seven percent in all of 2018.

“You saw, in a month, double the inflation rate that you saw over one year,” he said. “So, obviously [for] the refugees, who have very low income but also they have little aid, this aid value will drop if prices increase.”

Just under half of refugee families in Lebanon receive some form of cash assistance from UNHCR or the World Food Programme. Officially, families get $27 per person per month, which they can use to buy food in designated stores or withdraw in cash using a bank card.

Because of the restrictions on dollar withdrawals, aid money is now coming in lira, rather than dollars. That’s a problem, said Ali Abu Talal, the “shawish” (community leader) of an informal refugee camp in the Bekaa Valley, near where Abbas lives. 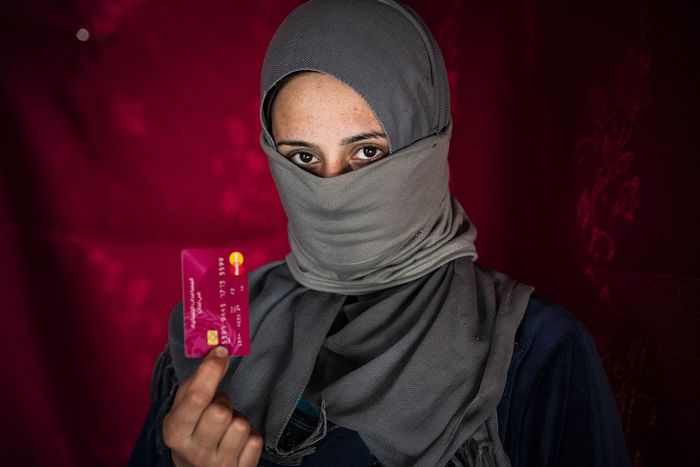 Michael Muller/UNHCR
Hanadi, who fled Syria for Lebanon in 2016, relies on cash assistance from the UN to get by.

Abu Talal noted that aid was based on the official exchange rate, amounting to about 40,000 lira per person. “Forty thousand doesn’t do anything,” he said. “The ones who you’re paying are asking to be paid in dollars or at 2,000 (lira to the dollar)... You buy tea and sugar, and the money is gone.”

Two refugee families told The New Humanitarian they had run into trouble withdrawing their cash assistance because of bank restrictions on withdrawals and large crowds flocking to the banks early each morning.

Umm Fadi, a widowed mother of four living in the same camp as Abbas, told TNH that by mid-December she had not been able to withdraw her aid money, which would normally be available on the first of the month.

“Today is Sunday – it’s a holiday,” said Umm Fadi, originally from Idlib. “Tomorrow, you’ll see people are waiting in front of the bank from 5 or 6 am. What time do I have to go? You can’t, as a woman alone, go out at 1 or 2 or 3 am to be able to withdraw the money.”

Abou Khaled confirmed that some refugees had told UNHCR that they faced challenges withdrawing their assistance at cashpoints, either due to overcrowding, unavailability of funds, or other restrictions.

“Humanitarian programmes are subject to the same financial regulations currently affecting all bank users in Lebanon,” she said, adding that most problems with accessing aid are usually resolved, even if it does take time and sometimes forces refugees to travel longer distances than they would usually have to.

There is some evidence that Lebanon’s financial woes are stirring up already brewing resentment against Syrian refugees, a feeling whipped up by politicians like Foreign Minister Gebran Bassil, who said at the December Global Refugee Forum in Geneva that presence of the refugees was “one of the reasons for the economic crisis” in his country.

Samir Chalhoub, a policy and advocacy specialist for the Danish Refugee Council, said that in recent focus group discussions with refugees, some Syrians said they had been extorted by groups of Lebanese demanding bribes in order to let them access cash machines.

“There is a general perception that refugees earn on their card in US dollars, so they live a good life,” he said.

In response to the worsening economic conditions, Chalhoub said refugees had reported cutting back on meals and basic necessities like diapers and medication, while also pulling children out of school to work and taking on more debt. The UN has noted similar coping strategies.

It’s not yet clear if these problems have contributed to an uptick in returns to Syria, given the longstanding pressure on those in Lebanon to do so, as well as a recent wave of deportations.

The last four group returns facilitated by the Lebanese government were: August (797), October (926), one at the start of December (1,498), and one at the end of December (1,131). There is no way to know, however, if these figures are accurate as people can return on their own and many likely do not inform UNHCR or other authorities.

UNHCR’s Abou Khaled did say that many Syrians planning to go back home cited economic reasons as a driving factor for the move, including a rise in food prices.

But not everybody has the option of picking up and moving, given the myriad of obstacles in their way – including ongoing violence, destroyed homes, lost documents, and fear of the Syrian government.

Nonetheless, Abbas is thinking about it. First, he said, he needs to find the money to renovate his Homs home, which was damaged in Syria’s long war.

With local reporting support from two individuals whose names are being withheld due to security concerns.