Six months after tsunami waves crashed into Palu, the battered capital of Indonesia’s Central Sulawesi province, most of the 170,000 displaced people are still without a basic need: shelter.

The government has promised temporary, transitional housing for thousands of families, as well as cash aid to help people rebuild and get back on their feet. But survivors say the available temporary housing is inadequate, and that promised rebuilding funds have been wrapped in red tape.

When tsunami waves bulldozed the seaside home of Zaynudin, a 58-year-old fisherman, in Palu, he took his children and fled to the hills above the city. Today, the family still lives in the same rickety tent – one of tens of thousands of families waiting for help to rebuild.

Zaynudin is thankful to be alive. But his blue-tarp roof, draped over sticks of plywood, leaks when it rains; his perch high above Palu is far from the sea that used to sustain his family. He’s waiting for government help to move into a temporary shelter, and to rebuild a more permanent home.

“We don’t know how long we’ll be here, but the temporary shelters down below are all full,” Zaynudin said. “We can wait a bit longer, but we can’t do anything until we can get money or fish again.”

Indonesian authorities say some 100,000 homes were damaged or destroyed during the 28 September earthquake and tsunami disaster, which left more than 4,400 people dead or missing.

But six months later, families like Zaynudin are living much as they did in the fraught days just after the earthquakes struck: waiting for shelter and living off food aid.

Government officials say coordination problems have slowed down help to survivors. And aid groups warn of a “slow and complex” recovery and an uncertain future for families still living in tents or with extended family. 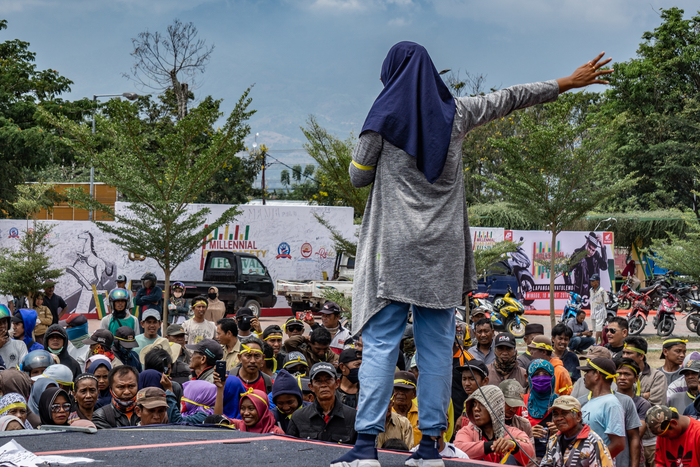 Homeowners stand to receive funds to buy building materials and hire labour. Additionally, each survivor is supposed to receive the equivalent of $0.70 per day for basic necessities. But government departments have yet to distribute rebuilding funds and cash allowances.

Several government bodies are involved – from the central government that controls the purse strings, to provincial-level officials in charge of disbursing cash help, to provincial and local disaster management agencies tasked with gathering data. But officials within these departments also point a finger at each other to explain delays.

Some survivors have moved in with extended families, found new ways to scratch out a living, and started rebuilding their own homes elsewhere – if they can afford it.

One government department blames the delays on these transient residence situations. When survivors can’t be located, the government can’t validate their claims to compensation, said Ridwan Mumu, who heads the province’s social affairs office and runs its cash allowance programme for disaster survivors.

“Cash allowance is supposed to start as soon as people move into temporary housing,” Ridwan said. “But it hasn’t started because the disaster agency requested names and addresses first in order to disburse. All of the problems are problems with gathering data.”

Arie Setiadi Moerwanto, who leads the central government’s programme to build temporary and permanent housing in Sulawesi, said he is in the dark on why rebuilding funds have not been disbursed.

“The problem is the stimulus money is a bit late, and it’s making people's lives difficult,” said Arie, adding that he has asked the provincial disaster agency to accelerate the process. “If they can validate 2,000 people in one day, please give the money in stages.”

In turn, the head of the provincial disaster management agency in Central Sulawesi, Bartholomeus Tandigala, said his department is waiting for the central government to release the actual money – he said he requested the funds for rebuilding and and cash allowances in February.

Government promises to build temporary homes – to last two years before more permanent housing can be organised – have also been hit by delays.

"There are so many still living in tents"

An initial plan to build 1,200 transitional homes that could house more than 14,000 families were scaled back when officials realised many residents were quickly making their own plans: staying with family, or in shelters provided by private foundations. As of March, about 500 of the nearly 700 planned temporary homes have been built, but only one in five have water and electricity, said Arie.

Nani Nurmarjani Loulembah, the Central Sulawesi head of ACT, an Indonesian aid group that has helped provide food and shelter after the disaster, says survivors are especially dependent because most have lost their livelihoods.

“To date, aid is still not enough, in my opinion, for the people still receiving it, because there are so many still living in tents,” Nani said. “People don’t yet have jobs they can use to fulfill their own needs.” 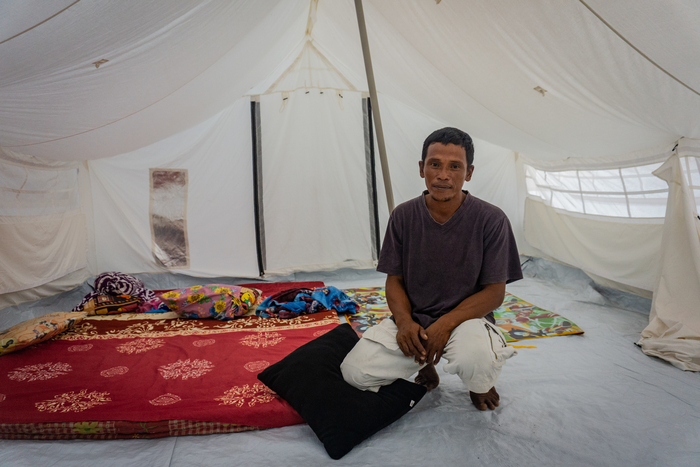 Ian Morse/TNH
Riswan’s displaced family sleeps in this tent near a relative’s home, though there are empty temporary housing units nearby.

‘If we get cash, we can control more of our life’

While the delays continue, frustration is rising. Hundreds of survivors have staged frequent protests in front of the Palu mayor’s office in recent weeks. Earlier this month, Yusrin Banna led a group demanding to be involved in decision-making on compensation and relocating survivors away from damaged areas.

“Victims’ rights, as laid out in disaster regulations, are far from reality,” said Yusrin, whose Palu home was swallowed up when the earthquakes liquefied the soil beneath his neighbourhood. “It’s as if the government has just dropped its duties.”

Suwarmin, 42, also joined a recent demonstration to protest a decision tying rebuilding funds to buying material and hiring labour, rather than unrestricted cash. In the weeks after the earthquakes, a private foundation gave Suwarmin and her family of six enough supplies for a floor and a leaky roof. But her extended family pitched in to help build homes in the hills above their former neighbourhood.

“We already have a lot of materials to build, so if we just get more it will be like wasting everything else,” Suwarmin said. “If we get cash, we can control more of our life.”

Many survivors have squeezed in with extended families. Riswan, a 44-year-old father of three who lost his coastal home in the tsunami, relies on help from groups like Yayasan Sayangi Tunas Cilik – Save the Children in Indonesia. Only a kilometre from his home are at least 15 temporary housing units that could house 180 families – the walls and roofs are complete, but the structures are empty because there’s no electricity or clean water.

“In January we were told we could move into the temporary housing, but up until now we haven’t received any more information,” said Riswan, whose family still sleeps in a tent because his relatives have no more space inside their home.

Nurmela, a middle-school teacher, moved to a small plot of land owned by a relative. She built her own shelter, which she plans to eventually turn into a new permanent home.

“Imagine how much better it would have been if the temporary shelters were built quicker,” she said. “Then I wouldn’t have had to spend all the money for this.”

Some families, however, are making a new home in the few temporary shelters the government has managed to complete. Nining Kurniawati lives in Palu’s first such shelter, opened three months ago. With a cash donation from an NGO, she bought supplies to open a small kiosk outside her modest home where she sells snacks and household supplies.

It’s not much – her only customers are displaced survivors like herself – but she hopes it’ll be enough to pay for her children’s schooling for the next two years.

“It’s been like this since the beginning,” she said. “We need to keep searching for food and struggle. But you have to face life’s journey.”