In her home village in South Sudan’s Yei River state, Poni Beida, 32, farmed while caring for her husband and five young children.

Then, in July 2016, everything changed: armed men stormed the village, gunned down her husband and mother-in-law, and forced the family to flee to a UN-run camp for internally displaced people in the capital, Juba, some 150 kilometres away.

After two years, Beida decided to leave the camp. “I could not continue living in a tent,” she explained. “I wanted to come to town and try to do something for myself.”

It hasn’t been easy. She found employment as a domestic worker, but the monthly salary of 700 South Sudanese pounds ($5) wasn’t enough to feed her family.

A number of local initiatives are trying to ease the way for Beida and others to rebuild their lives, as an agreement signed in September by President Salva Kiir, rebel leader Riek Machar, and other opposition factions offers South Sudan another attempt at peace.

If peace does result from the accord, building and sustaining it will require that Beida and many of the 4.5 million others who have fled their homes since the conflict began five years ago find work and access to social services.

Some 1.9 million South Sudanese, out of a population of 12-13 million, are internally displaced across the country, and more than 2.5 million are living in neighbouring countries as refugees.

Like Beida, most IDPs are unable to afford basic items such as food and fuel and depend largely on humanitarian aid for survival.

Once they return home, there will likely be deep tensions to overcome in communities fractured along ethnic lines by a conflict estimated to have killed hundreds of thousands of people, as well as difficulty accessing basic commodities because of widespread food insecurity and a decimated economy.

Previous peace deals have been short-lived, and violence continues in parts of the country; in a recent incident at the end of November 150 women and girls were raped by armed men near Bentiu in Unity State.

Yet, the International Organization for Migration reported an increased back-and-forth between displacement camps and villages and towns in the northeast region of Wau even before the agreement was signed, according to a survey it conducted between July and August.

Asar Ul Haq, who manages IOM teams that build shelters in camps throughout South Sudan, said people who are trying to go back to their homes still return to the camps because essential services and safe access to their homes are not always available.

Florence Anyikoru understands the challenge of rebuilding a life upended by conflict. During the Ugandan civil war, from 1981-1986, she was displaced and didn’t have the skills to support herself. A programme to teach workplace skills to women helped her. 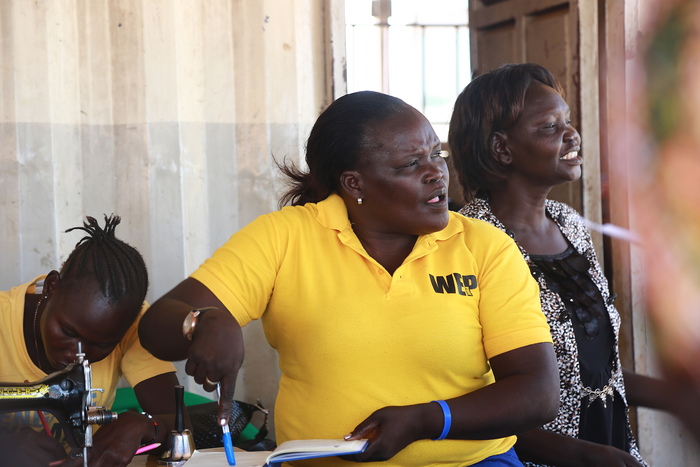 In 2008, after moving to Juba, she started a similar programme to aid women who had been uprooted by conflict between Sudan’s government and the Sudan People’s Liberation Army in the run-up to South Sudan’s 2011 independence.

After South Sudan’s civil war broke out in 2013, the initiative took on a different dimension, Anyikoru said. Along with teaching vocational skills, she included workshops on tolerance and reconciliation. Beida is a current student.

Women shoulder a heavy burden from the country’s years of conflict: 80 percent of recorded refugees and IDPs are women and children; an estimated 58 percent of households are reportedly female-headed as many male family members have been killed in the fighting; women often lack formal education; and, after years of war, job prospects are limited.

“We have women from different parts of South Sudan” at the Juba Women Empowerment Project, said Anyikoru. The initiative is supported by a US religious group, the Central Mennonites Committee. “While here, they learn tailoring and other life skills that eases their transition into the community,” explained Anyikoru. “We also train them in conflict management and resolution.”

This type of message is even more important now that the newest peace agreement has prompted some people to think about returning home, Anyikoru said.

“We encourage the women to speak to each other and share little resources we have together,” she added. “We hope the success of our graduates would encourage others to join the project and show the communities what can be achieved in harmony and peaceful coexistence."

Most of Anyikoru’s students are displaced women – some of whom fled their homes when the civil war began in 2013 and others more recently. For many, schooling wasn’t an option in their rural villages.

“We know our students are affected by the war,” Mustapha Atrima, an instructor at the programme, said. “Most of them cannot read and write. So we use drawings and demonstrations to teach.”

‘Peace at the grassroots’

Almost 400,000 people are estimated to have died in the last five years, after political conflict in the capital escalated along ethnic lines and soon engulfed the country. The war has decimated South Sudan’s economy, infrastructure has been destroyed, and people are living with untreated trauma from the violence.

“Agreements are signed, but roads are not opened and there are attacks all over. It seems like we are in prison. This is not real peace.”

For many who feel as if they lost everything – homes, families, and incomes – the thought of reconciliation and reintegration into their former communities is not easy.

Rose Michael, 27, fled her home in Mundri, 150 kilometres west of Juba in the Equatoria region, in January, when gunmen attacked her village, killing civilians and setting homes on fire.

Since then, she has been going camp to camp to search for her husband and two children; she last saw them before the attack.

“Agreements are signed, but roads are not opened and there are attacks all over,” she said, speaking in Juba in October. “It seems like we are in prison. This is not real peace.”

In interviews with people living in Juba shortly after the peace agreement was signed, the resounding sentiment was that they are tired of the fighting and want to identify those responsible for committing atrocities and bring them to justice.

According to a report by the non-profit organisation Search for Common Ground, the persistence of conflict has “normalised” violence among South Sudanese: research from 2015-2017 found a 15 percent increase in the number of people who said they believed that violence against another “tribe” was acceptable.

Salam Junub is a youth group that formed early this year to encourage civilian participation in the peace process. Funded by members who lived through conflict in Juba in December 2013 and July 2016, the group aims to counter such attitudes by giving people a place to talk and to begin to think about forgiveness through twice-monthly gatherings at local tea spots called “Take Tea Together”.

Started by private citizens in neighbourhoods in Juba, the voluntary youth-led initiative brings people together from different communities and across the political divide. Alfonso Albino, a member, said that for peace agreements to be successful, civilians must first reconcile.

“The citizens need to own the peace agreement,” he said, speaking shortly after a ‘peace celebration day’ event in Juba in October. “They need to [have] dialogue and agree to shun violence. There should be individual reconciliation and declaration of peace at the grassroots.” 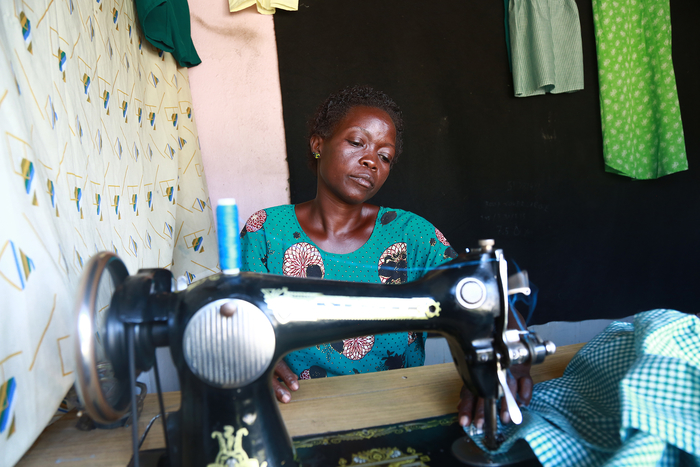 David Loa Eperit/IRIN
Jerusa Moro working at home. She makes school uniforms and mends clothes in her house in Rock City in Juba.

Jerusa Moro, 33, is not waiting for peace to take hold to rebuild her life. Like Beida, she used to live in an IDP camp and worked as a domestic worker – a job that left her unable to pay for food or school fees for her children. Now she lives in Juba’s Rock City neighbourhood, where she runs a dressmaking business and estimates that she earns at least 20,000 South Sudanese pounds ($150) per month.

Displaying family photos taken before the conflict, Moro said her life was changed by the war: her shop was looted and her house burnt down. But the skills she gained through a training programme – the same one Beida is now participating in – have given her a fresh start, she said. She started her business and hopes to use the income to rebuild her home.

“Our success depends on stability in the country, and people accepting and living with each other in harmony,” she said. “Even if people in government agree to work together, there will be no peace if civilians do not reconcile and work together.”