The international president of Médecins Sans Frontières stepped down last week after six years at the helm.

Canadian doctor Joanne Liu held the position from 2013 to 2019 through tumultuous times for the organisation, including the West Africa Ebola epidemic, a wave of attacks on health facilities in conflict zones, and what became known – in Europe at least – as a migration “crisis”.

MSF is not a single organisation: several large NGOs operate under a loose umbrella structure. As international president, based in Geneva, Liu was elected by a general assembly representing MSF’s branches around the world. The president does not have executive control across the whole MSF family but acts as an external representative and “deal-broker”.

Liu talked with The New Humanitarian by phone from London a few days after her successor, MSF fieldworker and surgeon Christos Christou, took over.

She answered questions about the strategy, culture, role, and relevance of the iconic medical organisation. From radical beginnings in France in the 1970s, MSF has grown to run an annual budget of €1.6 billion and a staff of 68,000, with operations in 74 countries treating some 11 million patients.

Liu recalls political storms, wrangles over strategy, and growing pains. But it’s the sustained US attack in October 2015 on an MSF hospital in Kunduz, Afghanistan that looms most over her memories and that will, in all likelihood, define her legacy.

Highlights from the interview follow, edited for length and clarity.

TNH: In an internal report in June you gave a diagnosis of some of the illnesses you think MSF faces. ‘Humanitarian diva’ was number one. Tell me about that.

Joanne Liu: I really do think that we have all passed this era where an international organisation will come into a country and say, ‘it is my way, otherwise, it's no way’. That [era] is over.

I think the Ebola outbreak in the Democratic Republic of Congo was a real landmark in that respect. They [the government] were in the leading seat… for good and for less good outcomes…. At the end of the day, we are a guest wherever we are.

I know that people are shocked to hear those kinds of words, but the neocolonialism mindset: ‘I am coming, I am the saviour, and I know best’ – I think that it's very good that people are pushing back on that.

In addition to the saviour complex, it's the fact that people are not listening to what the needs are in the field. I think that we have to step down from our pedestal, not only MSF, but many other international organisations, and not preach to people, but to just say, ‘what are your needs and is there a match?’

TNH: MSF used to be an ‘enfant terrible’, but now it's middle-aged – how is the organisation?

Liu: I think there's a bit of a nostalgia about MSF being this enfant terrible of the 70s. We started from a few people who were volunteering – you were initially having to pay for your ticket to go to the field.

[Now] it’s massive, massive. When you start to manage an organisation of that size, then you have to put in place some systems and some structure. Trying to get ourselves aligned as a movement is creating a lot of internal bureaucracy and process.

We need to make sure that the core social mission of MSF, which is bringing assistance to people in crisis, remains the priority focus of the organisation and [is] not being overtaken by the survival of the institution and headquarters.

So that is tricky. It is difficult right now to find the right balance because we basically have outgrown all of our systems and processes.

TNH: When MSF is at the top table, briefing the Security Council or invited to international summits, do you feel uncomfortable about being part of the establishment?

Liu: Every time that we've been at those, it’s been an internal debate. If you go there and [don’t] challenge the establishment in a strong way, then you should not go there.

(Liu represented MSF at a 2016 debate at the UN Security Council on attacks on medical personnel and facilities. The Security Council adopted Resolution 2286, condemning such attacks and reaffirming the protected status of health services in conflict under international law.)

For example, if you take the UN Security Council speech in May 2016, we agonised over every single word. I think we got more than 40 versions of that speech.

Some people didn't want me to do it; people wouldn't agree. One of the best sentences of that speech was to accuse the Security Council: [to say] that four of the five permanent countries are part of a coalition who were bombing us.

TNH: How serious are the difficulties of having different operational centres in Amsterdam, Barcelona, Brussels, Geneva, and Paris?

The international office [which Liu headed]… is a platform for people to speak together… and to make sure that we are aligned and are unified, as much as we can be, around some key event or conflict area or area of deployment.

My job was to be a deal-broker in the movement.

TNH: Did they listen to you, or is it like Game of Thrones under the surface?

Liu: I think in the human being you will find the ambition, the ego, and, as well, the courage, and the dedication. So it's not because we are humanitarian that we don't have those human factors. Yes, at times, the Game of Thrones seems to be a baby playground compared to what MSF can be.

In 2006 [at an internal summit]… we agreed to disagree – we agreed that there would be a dissident voice in MSF. So this is how we are.

TNH: How does that play out in the field, handling something like the Ebola outbreak? Is that a source of strength or a source of headaches?

Liu: I think it's both. Life is never black and white. If you take DRC and Ebola, for example, I think that each operational centre has developed either a knowhow in particular things, or they have developed a particular interest. We know that this section was much more involved in vaccination trials and is championing the introduction of a new vaccine. There's another [section that’s] much more into the current trials of the vaccine, and then another one is much more into doing community approach; another one is more in Ebola treatment centres.

When we can [combine our efforts] and when it happens [well], it is great... it's the best of MSF. But to get there it's a lot of headaches.

TNH: What do you think about localisation? Do you feel any obligation to lift up national organisations and leave behind a stronger civil society?

Liu: I think there's MSF, and there’s me. I believe, personally, this is somehow an imperative. I think that coming and doing the “Ghostbuster” has some good at the peak of a crisis if there is no capacity. But it cannot be the only way of intervening.

I think it's going to be a big shift for the organisation of MSF.

MSF is most of the time a great responder, a fairly good doer, a very bad partner.

We deeply need to improve. Our survival and our success in the next decade is [going to be dependent on] how meaningfully we partner with local agencies or local [health ministries].

TNH: You had to fire 52 staff members on the basis of sexual abuse, exploitation, or harassment last year. Do you think you’ve got this problem under control?

Liu: We do not leave any room for complacency. You need to have a system for reporting. You need to be a safe place for everybody. And then we need to have a swift and quick, discreet and professional system... and take clear action. This is what has been strengthened over the last few years. We have re-boosted everything, and I think today we are in a much, much better place. But it will take continued pressure.

We never realised the blessing of our financial Independence as much as today, because people come to us and tell us, ‘if MSF doesn't say it, nobody's going to say it’.

TNH: You’ve talked about ‘selective humanitarianism’. What can MSF do and what can't it do?

Liu: We are tolerated when it fits the agenda, we are obstructed when it doesn't. I know that we are not fixing the root cause of what's going on in Libya, but if we were not in the Libya [detention] centres, and if we weren’t able to tell what is going on and then share the stories of people we care for, it would be off the radar: nobody would talk about it. It’s to humanise crisis.

Portraying people fleeing for their life in Central America as invaders of America as if we were in Star Wars, that's indecent. We have to tell the story of a mother and father and a child who were looking for a better future. Full stop. And I think we have a key role.

We never realised the blessing of our financial Independence as much as today, because people come to us and tell us, ‘if MSF doesn't say it, nobody's going to say it’. 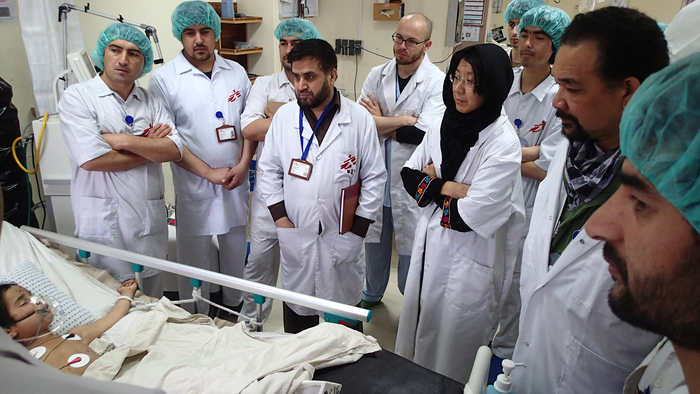 TNH: Looking back: highlights and lowlights?

Liu: I think I got the lows and the highs with Kunduz.

The 21st century for me is a century of fear. Everything today is seen through the lens of security.

We believe in IHL [International Humanitarian Law] to a certain extent, but we're not naive.

The 20th century was, after World War II, somehow the humanitarian century.

The 21st century for me is a century of fear.

Everything today is seen through the lens of security. For Ebola, you will only answer when you feel threatened (as the Global North). The way you’re going to wage war is you're going to see the potential enemy everywhere. And then, for migrants, you are going to overstate a narrative of invasion instead of solidarity.

[With UN Security Council] Resolution 2286 [condemning attacks on medical personnel and facilities] we were happy that we had a political signal to protect the medical mission. I was somehow relieved that I was able to transform a tragedy into something a bit more positive.

If you don't keep a topic on the big international platform it will go off the radar. By bringing Resolution 2286, it basically put a spotlight on the issue and then people cannot pretend that nothing has happened.

No, it didn’t stop the problem. But, at the end of the day, I would say it prevents full impunity. The basic rule of naming and shaming still works: people don't like it.

TNH: Will you miss your job?

Liu: I will certainly miss it. It's been it's been an immense, immense privilege… because we faced some of our biggest challenges over the last few decades: the Ebola outbreak in 2014-2015; and then the attacks on hospitals, with the terrible tragedy in Kunduz; and the forced displacement crisis.

It's such a privilege to be at the centre of those crises and, having the confidence of the movement, to go and speak on their behalf and try to basically move lines on things and try to advance.