Daniela wakes up at 4am everyday to begin an hour and a half walk to school in Colombia, across the Venezuelan border. The three hour round trip is normal to her now, she says.

The 14-year-old mathematics enthusiast has made this commute to Colombia for two years, after earning a competitive spot at a high school near the border town of Cúcuta.

“Teachers were leaving and there were no classes,” Daniela said about her hometown in Venezuela, Llano de Jorge, from where the teenager makes her journey over the Simón Bolívar footbridge each day.

Thousands of other Venezuelans cross into Colombia daily to migrate, or to buy food and medicine unavailable at home and then return.

Speaking on her way home after school with two Venezuelan friends, Daniela told IRIN it can take 30 minutes just to get through the border, and sometimes they have to plead with Venezuelan border officials who can be reluctant to let them pass.

In Colombian schools along the border, eight percent of students are now Venezuelan, according to a report released this year by the Norwegian Refugee Council and Colombian education authorities. Other new arrivals are Colombians who had fled to Venezuela mainly because of the violent Colombian armed conflict and are now coming back.

The report also notes a nearly a 50 percent increase in the number of students coming from Venezuela between 2018 and 2019.

In one ‘’mega’’ high school with 2,500 students, just outside Cúcuta, 85 percent of students are Venezuelan or “returning” Colombians. Around 1,200 of the students cross the border daily to reach the school.

Lala Lovera, director of Fundación Comparte Por Una Vida– a Colombian NGO set up a year ago to help Venezuelan migrants – says there aren’t enough places in Colombian schools to meet demand, and there is no provision for transport.

"It’s to do with the lack of national and local budgets to provide these children with transport”, Lovera says. “They are walking more than 10 kilometres a day just to get an education.”

She added: “The secretary of education in this region is facing a huge challenge; they need 8,000 spaces to be able to cover the demand for the migrant and returning population.”

“The situation is going to explode, so many are arriving.”

In response to Venezuela’s economic decline, many teachers have fled the country in search of better opportunities abroad. Others refuse to work for the devalued salaries the government offers in state schools.

Some students who live near the border, like Daniela, have been able to access schools in Colombia, but competition is fierce and the education system is at breaking point.

“The situation is going to explode, so many are arriving,” said German Berbesi, principal of Megacolegio La Frontera, a school established in 2016 in part to deal with the large migrant population.

Berbesi is calling for more to be done to deal with migration into Colombia, and to help Venezuelan children who arrive in bad shape.

“A lot of Venezuelan students arrive depressed, affected by what’s happened in their country,” he says. “They leave behind friends and family and everything is new to them.”

Of the 47,457 children enrolled in schools near the border area, 3,841 have Venezuelan nationality. Some 2,037 others are returning Colombians who had moved to Venezuela but are now fleeing the crisis there, according to NRC.

NRC’s Colombia director, Christian Visnes, told IRIN that they are seeing children not only affected by the Venezuelan crisis, but other factors in Colombia, too.

“In Cúcuta, 12 of every 100 students have been affected by the internal conflict in Colombia and the crisis in Venezuela,” Visnes said. “There are children that have been completely neglected.”

In addition, nearly forty percent of some 4,000 children not attending school in Cúcuta are Venezuelan, according to NRC, which runs education programmes in the region.

“The international community must increase support for this situation," Visnes said. 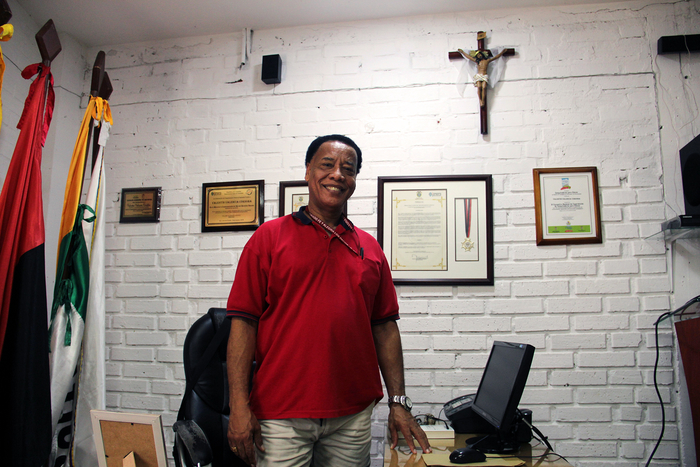 Steven Grattan/IRIN
Valentin Cordoba at his school in Cúcuta. He says the hardest thing to see is the Venezuelan children having to leave everything behind.

“The hardest thing for these children is having to leave everything behind – that’s heartbreaking to watch.”

“Students have to catch up to the same level,” Cordoba says. Yet, he adds, “The hardest thing for these children is having to leave everything behind – that’s heartbreaking to watch.”

Valentina, 13, is a student at the Mega Colegio La Frontera. She moved to Colombia two years ago with her mother and siblings.

Valentina’s mother works at the busy Simón Bolívar bridge, scraping by in the competitive business of selling bus tickets to the thousands of migrating Venezuelans who pass daily.

“I miss my house, my friends and family there,” Valentina, a history fan says.  “I hope things get better soon so I can go back.”