In the absence of a functioning state, outside NGOs are left to provide healthcare – even primary healthcare – to most of South Sudan. Yet those organisations continue to face major obstacles to doing their work: saving lives in a country beset by civil war is impossible without access to the wounded and the sick.

Between January 2016 and December 2017, there were at least 50 attacks on medical facilities and personnel in South Sudan, and 750 denials of humanitarian access, according to a new report published on 23 April by the Watchlist on Children and Armed Conflict. Those attacks included “arson and looting; occupation of medical facilities; and threatening, intimidating, detaining, abducting or killing medical personnel,” the report states.

In this atmosphere, international aid agencies must constantly rethink how to adapt to fast-changing conflicts so they can bring supplies and medical assistance to cut-off communities. And they must also cope with poor or nonexistent infrastructure and, soon, the rainy season that makes many existing roads and paths impassable.

“It’s dramatically challenging in South Sudan,” explained Markus Küper, a trauma surgeon with the International Committee of the Red Cross. “Due to poor roads and means of transportation, many patients with serious injuries die before they can get healthcare.”

Decades of economic marginalisation of southern Sudan meant there was no functioning healthcare system to speak of even before civil war broke out in South Sudan in 2013 – just two years after independence.

Solid statistics are hard to come by here, but anywhere between 50,000 and 300,000 people have been killed since, and an untold number injured.

An estimated 4.5 million people have been displaced, either staying internally, or fleeing to neighbouring Uganda, Ethiopia, Sudan, and Kenya (85 percent of the refugees are women and children).

Parts of South Sudan slipped into famine last year, much of the country is gripped by cholera this year, and UN agencies are warning that more than seven million people, almost two thirds of the population, could be severely food insecure in the coming months without sustained humanitarian assistance.

The need for an effective healthcare system in South Sudan is clear. But healthcare receives approximately three percent of the annual budget – one of the world’s lowest percentages. More than half the country’s finances go towards “security and administration”, much of which fuels the civil war. By comparison, Rwanda, a country smaller in size but equal in population, set aside 9.2 percent for health in the 2017/18 fiscal year.

According to the UN’s emergency aid coordination body, OCHA, as of December 2017, only around 400 of South Sudan’s 1,900 medical facilities are fully operational.

“We first need peace for things to change,” said James Jada, outgoing Health Minister for Jubek State. “I’d like to see 10 percent of the national budget allocated to the health sector, but due to the crisis, we’re not the priority,” he explained.

One morning earlier this month in Duk Padiet, a small village hundreds of kilometres north of the capital, Juba, the whole community gathered to watch the evacuation of two villagers shot during a cattle raid. They had been allotted spaces on an ICRC plane.

The small plane landed on the dirt strip; the patients were loaded on. “I’ve been waiting for several days to fly to Juba,” said Deng, shot in the leg, who only gave one name. He had never before left Duk Padiet, nor been on an airplane. The other man was in a more serious condition. He had a gunshot wound to the face. The air filled with the pungent smell of dead flesh emanating from Deng’s white bandages.

Armed conflict and terrible road conditions mean that providing healthcare to wounded, starving, or critically ill people is often only possible by plane. When rains come, as they will over the next few weeks, runways and roads turn to muddy fields and can’t be used. 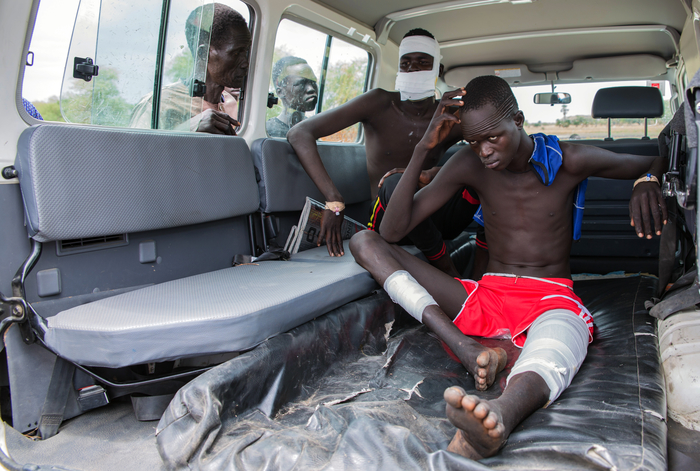 Stefanie Glinski/IRIN
A medical evacuation takes place in Duk Padiet, where people have been wounded during a cattle raid. One man has been shot in the leg, another man in the face. Patients are being evacuated to Juba where they receive further medical treatment.

At Juba’s airport, more humanitarian flights line the runway than commercial ones. “We have seven planes and two helicopters that we use to provide medical care in remote parts of the country or to evacuate patients,” said Shorty Adlard, air operations manager at ICRC. “The flights have to get approved by the government daily, but during the rainy season landing is difficult and often impossible.”

Some planes have become stuck, and many more aren’t dispatched. The risk of landing without the guarantee of getting back again, especially in areas where fighting is prevalent, is simply too high.

Even when the planes are running, medical personnel must make impossible choices. Heavy clashes between government and rebel forces or rival militias often leave large numbers of seriously injured people. With limited space on planes, doctors must decide quickly which lives can be saved and which can’t.

“We take people who have a chance to survive,” said Küper, the ICRC surgeon. “When there are a number of injured people, we usually evacuate those who have a good chance at survival. If chances of survival are very slim, we might not be able to evacuate. It’s not an easy decision, but it is based on solid medical knowledge. There often are more injured people than there is space on the plane to evacuate, but we’re trying to save lives where we can.”

South Sudan is roughly the size of France but has only around 200 kilometres of paved roads. Most of the country is, at best, reachable by mud and dirt tracks, many of which aren’t accessible during the May to November rainy season. There are just three paved runways – Juba, Malakal, and Wau – making the majority of airstrips equally inaccessible during the wet season. A big part of opposition-held Unity State is covered by the Sudd, a large swamp with hundreds of scattered islands, where displaced people have often hid from fighting.

To give a better sense of the challenges, Küper explained what he faces at a 60-bed mobile hospital in opposition-held Ganyiel – a small town with an empty market surrounded by swamps.

Patients, he said, are either evacuated to Ganyiel by plane, or navigate their way to the town on hand-carved wooden boats that quickly fill with water. Most of the hospital’s equipment has to be flown in from abroad. With limited supplies available, Küper said treatment methods have to be adjusted and simplified.

It’s difficult both for health staff to reach remote, conflict-torn areas and for people to get to the treatment posts. In hard-to-reach areas, international NGOs have therefore recruited local staff and largely made their operations mobile so at least some medical capabilities can move with vulnerable populations in case fighting breaks out. 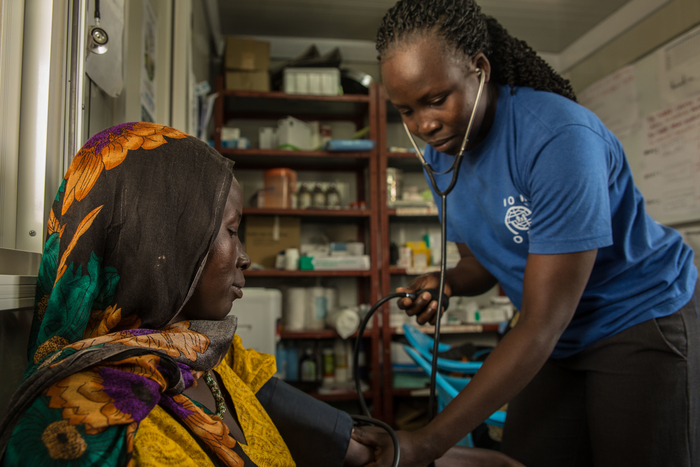 “We work with local staff in remote areas,” said Martin Braaksma, head of Médecins Sans Frontières’ mission in South Sudan. “The mobile teams largely consist of community members who have basic education and can provide basic primary healthcare such as malaria diagnosis and treatment.”

A mobile clinic is often no more than a few bags full of medication and sheets hung up between trees to set up a consultation room. A lot of what’s provided is very rudimentary. “If the situation would stabilise, we would start looking to shift part or all of our 10 mobile clinics to more fixed health posts,” Braaksma said.

Millions of children, one children’s hospital

Even in some of South Sudan’s biggest towns and cities, medical facilities are badly stretched or have to be hastily concocted.

In Juba, Al Sabbah is the only children’s hospital in a country of 12 million. It has only one generator and two breathing machines, but on busy days treats up to 500 patients.

In the early morning hours, hundreds of mothers, dressed in colourful robes, line up at the clinic’s entrance, their sick children sleeping or crying in their arms.

Paediatrician Justin Bruno doesn’t go home after a nine-hour shift, but continues to work at a private clinic, where he stays until midnight to make some money. His regular job hasn’t paid him in months and he’s trying to make up the difference. Even though he’s not receiving a salary at Al Sabbah, he says he can’t give up on the children who need medical treatment.

But receiving treatment in Juba is easy compared to what it’s like in the rest of the country. Outside the capital, conflict, corruption, inflation, and the deteriorating war-time economy have all contributed to making conditions even worse.

In Malakal, which used to be South Sudan’s second city but is now destroyed by fighting, a red metal bed sits on its own in an otherwise empty room. A final remnant of a once-functioning hospital, it is testament to the scale of dysfunction in South Sudan’s healthcare system.

Sitting on the bed – clothes torn, bare feet covered in dried dirt – was 10-year-old Buguot Wien. His family lost everything in the fighting. For the past couple of years, they have been squatting in the hospital’s leftover structures.

The International Organization for Migration has set up a primary healthcare unit in the ruined building that Buguot’s family now calls home. “We have doctors and nurses who use some of the rooms to see patients here,” said Thon Deng, who works for IOM there as a polio vaccinator. 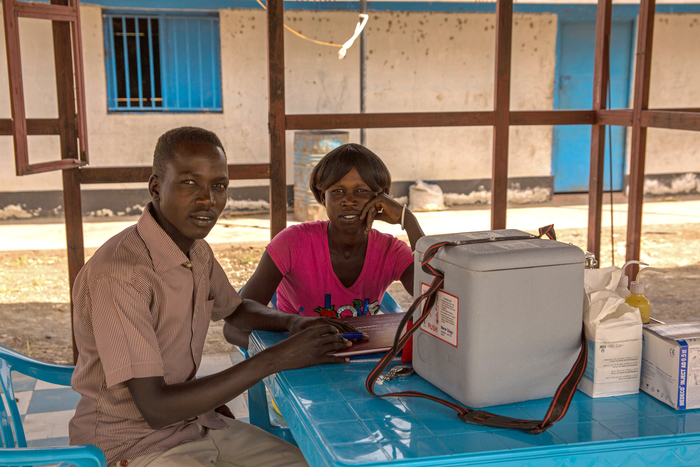 Community healthcare workers are deployed to walk through the streets, encouraging people squatting in ruined buildings to come in and receive medical care and vaccinations.

“It’s a day-to-day operation,” explained Deng. “We use mobilisers to go into the community to inform people, and receive up to 100 patients daily.”

The other major obstacle to delivering healthcare in South Sudan is obviously the war itself. Even some of the areas that should be easier to reach geographically – such as the Equatoria region – have seen constant fighting recently as well as killings of aid workers.

Read more: The war in Equatoria

When IOM Health Officer Benson Otieno returned from a rapid response cholera mission in a rural part of South Sudan a few years ago, shots were suddenly fired.

“Keep going,” he told his driver, but two people in the car had already been shot dead. A bullet whizzed through his shoulder and others narrowly missed his neck, leaving still-visible marks on his skin. Otieno was evacuated and survived. Several months later, he decided to return to work in South Sudan.

Many other aid workers haven’t been as lucky as Otieno. At least 99 have been killed since the start of the war and several new deaths have already been added to the list this year.

“Security is a constant challenge; it’s one of our biggest issues,” said Otieno. “Right now we’re providing emergency response, but long-term care will be a challenge.”

One of MSF’s clinics in Leer, hometown of rebel leader Riak Machar, was attacked and looted four times before the organisation decided to shut it.

It was attacks like this that led the organisation to establish the small mobile clinics in this area; a set-up flexible enough to pack up and evacuate on the spot should fighting break out.

As Braaksma put it: “People are not able to come to us, that’s why we have to go to them.”