“I'm a bit nervous,” says Juleen Punter, a 29-year-old librarian, fidgeting with her phone. The catamaran ferrying Antiguan volunteers and Hurricane Irma evacuees eases up on approach to Codrington’s wharf, Barbuda’s only functioning dock. Like most former residents, Juleen hasn’t set foot on the island since it was pulverised and she was evacuated along with some 1,800 others.

Gaston Browne, prime minister of Antigua and Barbuda, declared the island barely habitable in the days following the 6 September hurricane. A full-scale evacuation meant the territory was briefly without a single inhabitant for the first time in more than 300 years.

Juleen hasn’t been back since Irma; very few Barbudans have. The government lifted the mandatory evacuation a month ago, but Barbudans are still reluctant to return. Lack of money and supplies to rebuild their homes, and apprehension at the government’s still-to-be unveiled strategy, especially about land (IRIN has more reporting on this issue here), are the most common reasons. Juleen, however, says she simply wasn’t able to find a ride on the infrequent and limited transport from Antigua. 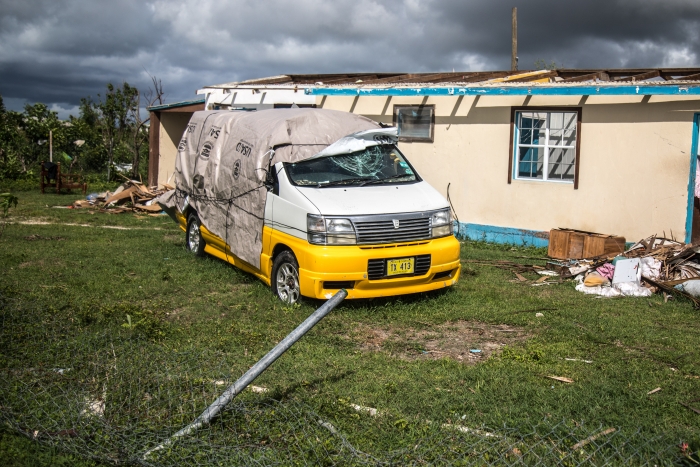 Tomás Ayuso/IRIN
The main population center on Barbuda, Codrington, was made a ghost town after Irma forced an evacuation of the islands 1,800 residents. Houses were left in ruins, cars damaged and animals abandoned in the scramble to find sanctuary in Antigua

The waterfront at Codrington, Barbuda’s largest settlement, is a staging area for military personnel, aid workers, and returnees. The majority of people here these days are security forces and clean-up crews. A large tent stacked with aid supplies dominates the dock.

Some residents are attempting to fix their mangled homes. A soldier tells IRIN only a couple of hundred Barbudans have returned full-time. Most of the rest of the population remain on the sister island of Antigua, which was largely spared by Irma.

Juleen walks onto the dock carrying a big plastic box she hopes to fill with whatever she can salvage from her home. Two friends accompany her on foot towards her neighbourhood, in the southern part of Codrington. Passing house after damaged house, she rattles off the names of neighbours and friends. Every single structure has suffered. Many have been blown roofless, and some crushed by toppled utility poles.

“How are we going to come back from this?” she asks. “Barbuda is finished!”

Assessments released by the National Office of Disaster Services (NODS) estimate that out of 1,082 pre-Irma buildings, only 150 are currently habitable. An additional 257 have been partially damaged but are still fixable. These are categorised as level 1 and 2 respectively. The remaining 650-plus buildings have been tagged as level 3, which means they are unsalvageable.

During the first phase, level one or level two houses are to have temporary repairs to make them habitable. NODS hopes residents and homeowners will come back to help clear their properties of debris to expedite this process so it can be completed by mid-December.

Phase two will then proceed by demolishing level 3 buildings. Finally, phase three will see temporarily restored level 1 and level 2 houses permanently prepared and brought up to new post-Irma building codes.NODS hasn’t given a timeline as to how phase two and three will develop, but a lengthy process is expected.

In an interview, Mullins described the silver lining that should come out of all these demolitions: A stricter building code that ensures new houses are built with hurricane resilience in mind. 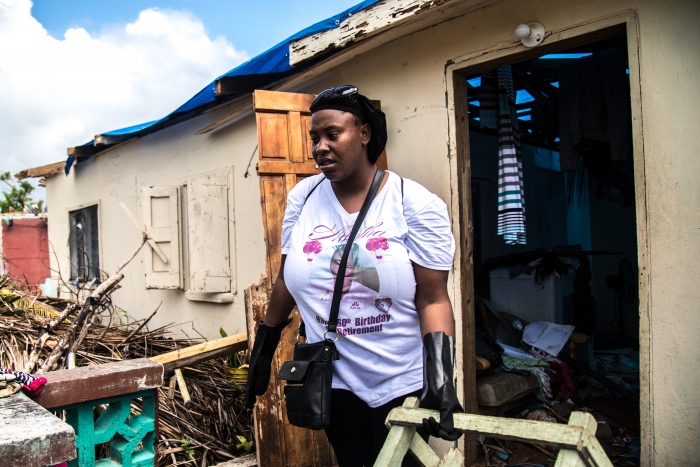 According to Mullins, the big issue is that, nearly two months on, too few Barbudans are volunteering to rebuild. Residents are essential as NODS and other crews can’t work on private properties without permission. But with conditions still precarious across Barbuda, a mass return remains unlikely and the reconstruction effort appears bogged down by this Catch-22.

The lack of power, food, water, or shelter – apart from in the command centre – is making the displaced wary of leaving the relative stability of life on Antigua.

After 30 minutes walking down desolate streets, emptied out after Irma stormed through, Juleen points out a ruined house and cries: “It’s that one. It's gone.”

The house, walls still intact, has had its corrugated iron roof ripped clean off. Her friends clamber through a boarded-up kitchen window, opening the back door, which was also haphazardly boarded shut in the rush before the evacuation. Juleen’s family home, exposed for a month to squalls, sea spray, and unrelenting sun, has been flooded with green, pungent water. 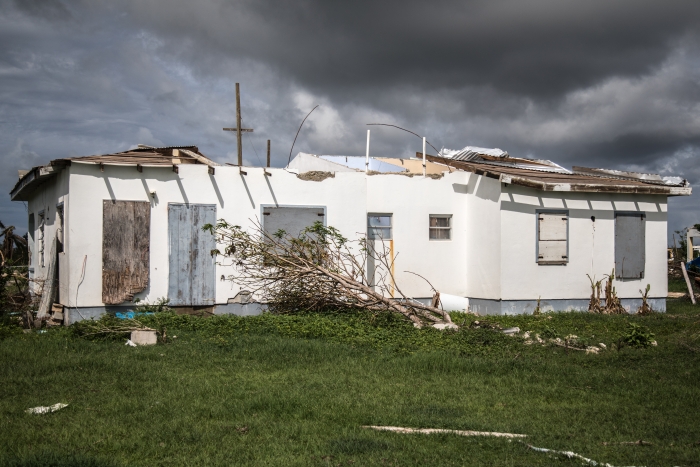 Tomás Ayuso/IRIN
The damage to Juleen’s house was extensive. Even though her roof was bolted to the structure, Irma’s winds ripped most of the rafters and metal sheeting from the house

Juleen asks for a moment; she weeps in the ravaged kitchen: “It’s worse than I imagined. What’s the point of coming back; it’s all gone!” Juleen starts pitching a lifetime of possessions, now blackened and ruined by mould, into a barrel for incineration. Her friends join in.

The group toils in silence as the clouds above the roofless house turn grey, rumbling with thunder. They work until It's time to leave for Antigua. She takes a few pictures of the house from the cratered street; stray dogs in packs scamper for shelter. A bus shuttling workers back to the dock gives Juleen a ride.

On board the ferry, as Codrington’s ruins fade into a sheet of advancing rain, the scale of Juleen’s predicament has become all too clear. “The water’s going to get in again and again until we put a tarp on,” she says. “I don’t know how to do this.” She says return isn’t an option, as her children, aged two and four, can’t live in those conditions, without a roof, without water, without power.

Several other Barbudans IRIN spoke to said they had reached similar conclusions – while they blamed the government for not letting them back sooner, they admitted returning was not a viable option. Some feared it would take years for Barbuda to get back to normal.

The following day in Antigua, Juleen runs errands. Like many other Barbudans, she finds Antigua expensive by comparison and has limited income and few job prospects to support her family.

Juleen was able to get her two boys into a school in the twin island’s capital of St. John’s, along with 600 other Barbudan children Antigua has absorbed. But she worries what long-term effects displacement could have on her boys: “It’s fine for them now; they think they’re on vacation. But how soon before they start asking questions?” 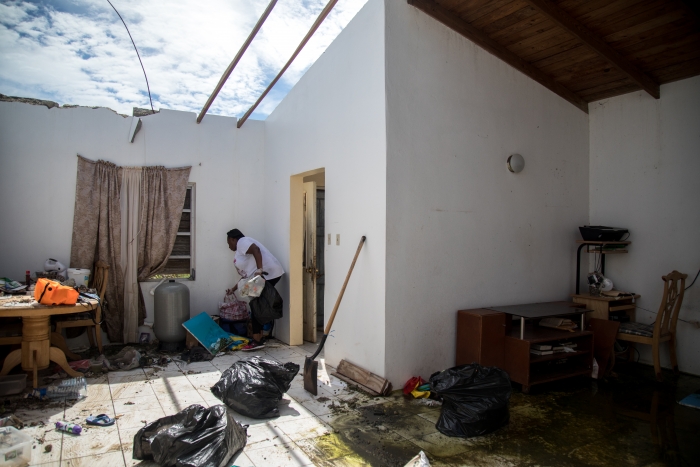 Tomás Ayuso/IRIN
The roof was torn off during Hurricane Irma’s path over Barbuda. This was Juleen’s first visit to her home since the night of September 5th

Her parents, retired and in New York, worry. Her father, not prone to such outbursts, wept over the phone when he heard the news from Barbuda. They asked her to move to New York with them, but Juleen is unsure what to do. She feels uncomfortable, though grateful, to have been put at a friend’s house on Antigua.

“It’s another person’s space, and we must respect it,” she says. “It’s better than being at a shelter, but I’m itching to get something for us fast. I just don’t have hope that it’ll be back in Barbuda any time soon.”

Sadness is turning to frustration. “I give myself until the end of the year to see what the government does for Barbuda. If they drag their feet... I’ll start looking at other options, like leaving the country,” she says. “Any time it starts raining, I start worrying it’ll be the same as Irma and I can’t help but cry,” she adds, shielding her face.

“I love my children and I’ll do what I can for them. There isn’t much left for us in Barbuda. I thank God for everything, but we survived so we could live.” Juleen begins preparing supper, stirring pieces of pork braising in a kitchen that isn’t hers, while her two boys roam around barefoot and carefree in a house far away from their own.