Turkana is one of several arid counties in Kenya in the throes of a prolonged and extreme drought. Most people in these areas raise livestock for a living, grazing their sheep, goats, cows, and camels on open rangeland. Usually, two annual rainy seasons ensure there’s enough grass to keep the millions of animals healthy. But this year, hundreds of thousands of animals have died of hunger, thirst, and disease.

IRIN spoke to several Turkana residents about the impact the drought was having on their lives. 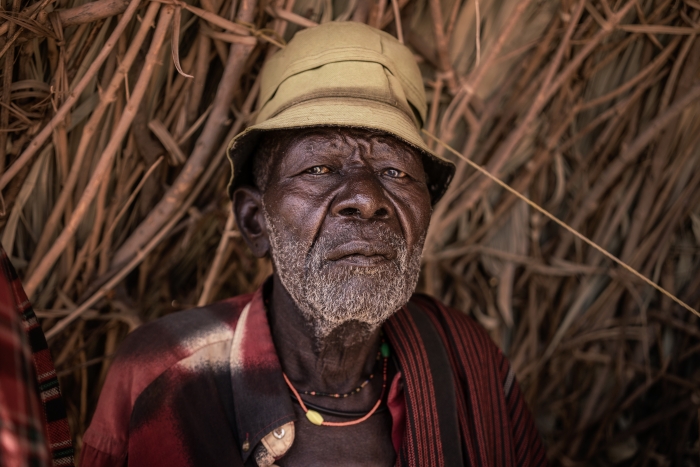 Since we met four years ago most of my livestock has died, I only have five animals left. I had 250 goats and 50 sheep. They died because of the drought – they had nothing to eat. Normally, we take our animals to graze on the hills, but you can see there is no grass there now.

When I was young, we could predict when the rains would come – we knew it would fall after six months. When I had animals, we had enough to eat. We used to eat meat and drink milk and sometimes the blood of sheep and goats. We would only sell livestock when we were hungry – during the good times when they could graze well we did not sell them.

There has always been drought, but this one is the worst in my lifetime because it has killed so many animals, and the problem is spreading to humans – we are getting sick. Recently, there were showers for just three days, and the grass started growing for about a month. But that was not enough for the animals to grow healthy.

If it rains, I will get more animals if my daughter gets married and I get a bride price. If it doesn’t rain, I will be left with nothing.

If I could talk to the county governor, I would tell [him] about our way of life and ask him to help us with maize. We need development, to have more bore holes so that we can start farming. I would like to both farm and raise livestock.

I see things are changing and the changes that are coming make me sad. If we old ones die, everything will change, the younger ones will move away from the life we have lived. The way we used to live was good. We lived a free life. We could go where we wanted.

I was born in 1947 and I grew up here. My father worked this plot of land and also raised livestock.

Now my husband is dead and I have no sons to help me. There are only widows who work this land. Sometimes, animals come and destroy our work so we have to chase them away.

Before, I also had livestock. I would buy animals by selling the surplus from my crops. But over the past three years, when the drought came, it took all my animals; they died of hunger, including the newborns, so I stopped being a pastoralist, and I only farm now.

When there was no drought and I had livestock, life was good. When the animals gave birth, we had milk. We ate our crops and gave the chaff to the animals. Now there is only hunger – I have nothing to eat. We receive a cash transfer of Ksh5,000 ($50) every three months – I am not sure who pays it. We would like to get the money more often. People depending only on that money will die of hunger.

Earlier this year I planted maize on this plot but it became infested with insects, so we had to dig up the maize and destroy it. Now we will plant sorghum. When we have finished working the soil, we will open up the channels to let in water [from a nearby borehole]. It’s hard work – it takes two months just to plough and sow the land.

When I feel hungry I go and look for wild fruit. But when you eat that every day, you get diarrhoea. We only eat it because we are hungry.

If the government wants to support us, they should buy livestock for us or give us some food. But they should give it to us directly, not to the village elders who, when food aid is given, often only distribute it to their relatives. Sometimes, when we hear that some food has been delivered, we go and wait under a tree to get some, but it all goes to others, and eventually we go back home. That is why we eat wild fruit.

We may be old but we are trying and will keep trying until the government comes to help us. When the drought ends, I will sell this crop to buy more animals. But if the drought continues, we will die. 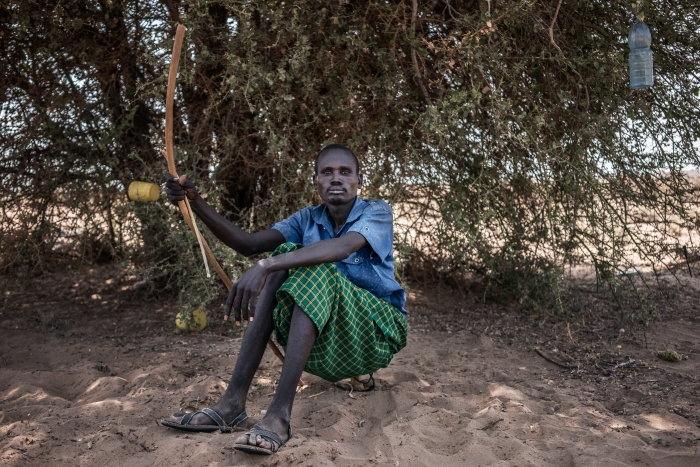 These are my father’s camels, they number around 50. A camel is worth Ksh70,000 ($680) if it has recently given birth [and is therefore producing milk].

Over the past 20 years almost 100 of our camels died because of drought. In this drought, 16 died. In our household we have also lost 40 cows, leaving us with just seven.

This is the worst drought. There is no grass. It rained last month but there were only showers.

We are suffering from hunger right now. Sometimes we go 10 days without getting food. We got some food aid once, some cereal, but we had no water to mix it. Food prices have gone up, a cup of maize [in the market] used to be Ksh10, now it is Ksh50. 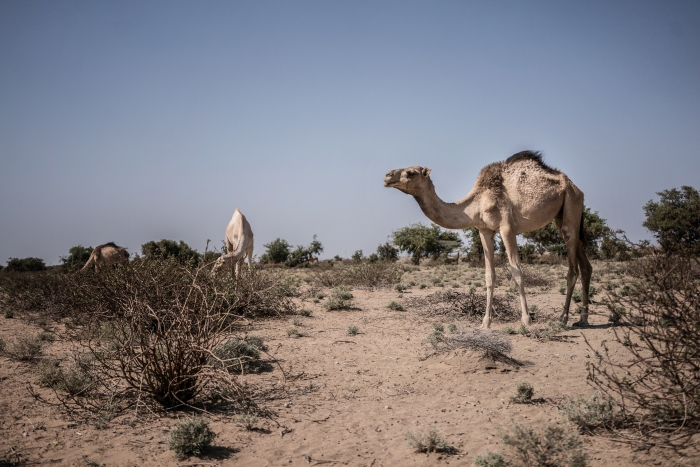 To find water for our animals, sometimes we have to walk 30 kilometres. That’s why we beg for water from passing cars on the road. Not everybody stops.

What we want from the government is for it to introduce agriculture to our community. We are used to raising animals, and pastoralism used to be good, the rain was there. But now, because of drought… all that will help us is agriculture.  When there is no rain, we get no milk from the camels. Sometimes, if we see rain clouds in the distance we will travel there.

I have really suffered with this drought and hunger, and now I would like a job. It would be better that I work so I can help my children. 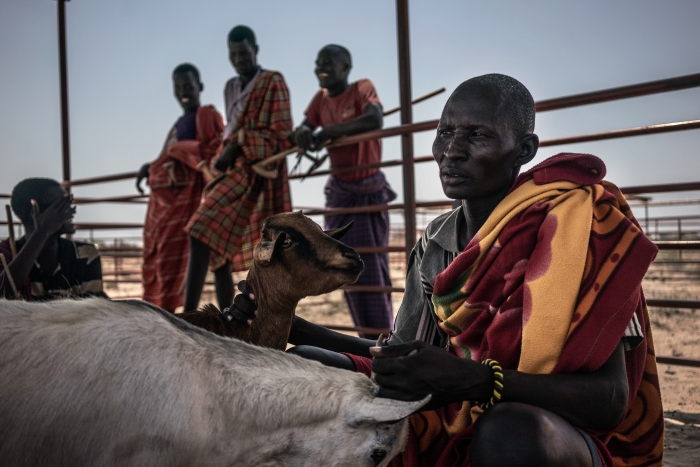 I came here to the livestock market to sell my two goats because I am hungry, but I did not sell them as the price of livestock is so low. I wanted Ksh3,000 for the she-goat and 5,000 for the male one. But the buyers, middlemen, only offered me Ksh1,500 for the female and Ksh1,700 for the male.

Before, when I had lots of animals, I had 300 goats – I was a man. I paid 100 of them as a dowry. I also had three cows my father gave me towards the dowry. Two hundred goats died in the drought. Everyone in the community has been affected. Now, I live like a dog because I am poor.

Getting enough food is a problem. We are not getting any food aid. We are getting thinner and thinner. Some of my family eat wild fruit to survive, and sometimes it causes health problems.

We need more help from the government. Before, they were not selective in who they helped, but now only a few get aid.

I don’t know how I can get back to what I had before. I know that in the future my children will not live as pastoralists because of drought. We decided to put them in school, but we have no money to pay for that, so they will not finish school.

The only thing that helps us is rain. When it rains, the grass grows and the goats graze. How can we survive without rain? 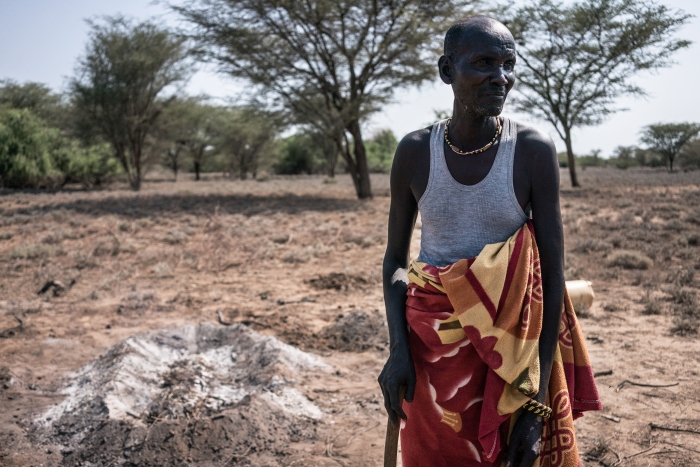 I live with my two wives, my mother, and I have 12 children. Making and selling charcoal is the only way I get food. I used to have 25 camels, seven donkeys, 12 cows, and 250 goats, but they all died in the drought, except for the few that we fed with maize bought with the money from selling charcoal. All the grass has dried up.

When a dead tree falls down, we dig a hole in the ground, cut the tree into logs, burn it under a covering of leaves. I make charcoal like this every day. Traders come from Lodwar to buy it. They pay Ksh200 for a 50kg sack. I make about two sacks every day. I know that in Lodwar the same bag sells for 700 or 800 shillings – but that is the way with traders. This is our only source of income.

Because of hunger, some people are cutting down live trees to make charcoal, although this is not allowed.

We are not getting any help from the government – it would be good if they gave us medicine and fodder for our animals.

In normal times, to find out where the grazing is good, we send out small groups of young scouts to find the best grass. When they return we go to that place with our animals.

I think the future will be very hard – this drought is very bad and there will be more like it to come. I don’t think my children or grandchildren will be pastoralists – some will go to school. All that will be here in 100 years is drought and hunger. 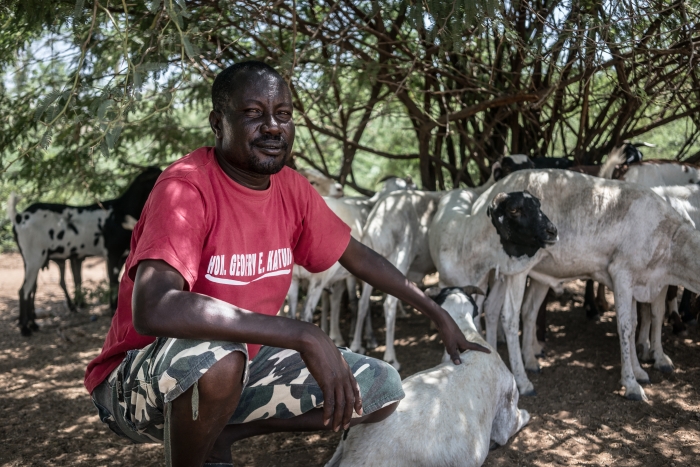 People come to this market from far way, sometimes travelling on foot for more than 200 kilometres.

The money I make trading here goes to pay school fees for my seven children.

The drought has destroyed our business. Before, we used to get customers from Nairobi – they don’t come anymore because they’ve heard there is no grass here to feed animals during the journey back.  Now, only locals are buying. The price has come down a lot since last year, from Ksh7- 8,000 to Ksh5-6,000. The government buying up livestock helps us, but the money they pay is not enough.

Before, when we had healthy goats you could sell at a good price and buy what you need. Now, the goats are malnourished and sell at a lower price, so it is hard even to keep the children in school.

Because of this drought, I think all the animals will die. In the future, life will not be good; it will be a struggle if we don’t get more support from the government and donors.

Livestock traders like me are thinking about changing business – like opening a hotel or selling second-hand clothes.

It makes no difference who wins the [presidential] election – whoever wins will only benefit themselves. Nothing comes to Turkana. Even with the county government [created under a devolutionary constitution adopted in 2010], only those who are close to it get the benefits. We at the grassroots are not getting anything.

If my children said they wanted to be pastoralists, I would say they should stay in school. Even if you become an MP, you can still have livestock.