Summer sun beats down like a spotlight on the Tigris River meandering through the town of Shirqat, the narrow band of water the only border between territory held by Iraqi forces on one side, and militants from the so-called Islamic State on the other.

Through the ripples of heat rising off the rich green riverbanks, the black IS flag can be seen flying atop buildings and hills east of the river. Daily, clusters of families cross the Tigris in a frenzy on tiny rafts, fleeing from life under IS control. Army units on the western bank receive the exhausted escapees in Shirqat, separating the men from women, shuttling them to reception and screening centers.

Many of these people have escaped from Hawija, some 50 kilometres east of Shirqat. Now that Mosul has been liberated, Hawija is the largest IS-controlled territory in Iraq. An estimated 70,000 people live there in a stage of siege, with militants in control and supply routes cut off by militias allied with the Iraqi army.

After living more than three years under IS occupation, more and more Iraqis are fleeing the city and crossing the river to freedom. Escapees told IRIN that inside Hawija, public executions by IS, malnutrition, and disease are rife. Life in the city, and its dozens of surrounding villages, has become a brutal routine of bare survival.

Once thought to be before Mosul in the queue for an anti-IS operation, the campaign to take back Hawija has been complicated by competing – but allied – forces around the city, and concerns about sectarian revenge in a Sunni-majority city that has a reputation for opposing the Shia-led central government.

Sitting with folded legs on the floor of a pre-camp reception centre in Shirqat staffed by local volunteers, with bits of her dyed-orange hair peeking out from her headscarf, Hindia Khalaf Atallah, 57, spoke of a life of extremes under IS rule.

“We’ve been under siege,” she told IRIN. “IS destroyed us. Life was horrible. Lots of people killed themselves because of this calamity. Night would come, and there was no food to put into our mouths.”

When the militants first declared their control of Hawija, around the same time they took Mosul in June 2014, Atallah said some locals welcomed their arrival, as IS styled themselves revolutionaries coming to protect the Sunnis of Iraq, after mass Sunni-led protests against the Baghdad government the year before.

Atallah said the early days of IS rule were different. “They didn’t hit anyone. They didn’t force us to wear the niqab [face covering for women],” she explained.

But as the militants began to lose ground to Iraqi forces across the country, their rule became more nihilistic. “Now, for women who try to flee, a bullet in the leg. For men, execution,” Atallah said.

Hawija was completely surrounded and cut off a year ago by a coalition of Iraqi militias known as Popular Mobilisation Forces, Kurdish peshmerga, and the Iraqi army. Prices of basic products skyrocketed, and people found themselves surviving off bare grain.

Despite the obvious risks, Atallah decided to flee in June. Leaving Hawija under the cover of darkness, she lied her way through IS checkpoints, telling the militants she was on her way to see a sick cousin in a village nearby. She hid in acquaintances’ homes on her way out, running between villages on foot.

Eventually, Atallah and a small group of escapees she had banded with found someone willing to drive them as far as Sdira, a village on a bank of the Tigris near Shirqat, which has been partially liberated from IS.

“He said this is the way,” Atallah recalled. “He gave us directions. He said he couldn’t drive us [to Shirqat], or [IS] would catch him and execute him. We ran and ran until we got here.” An Iraqi army boat found them at night on the riverside, and they crossed over the next morning to the safety of Shirqat. 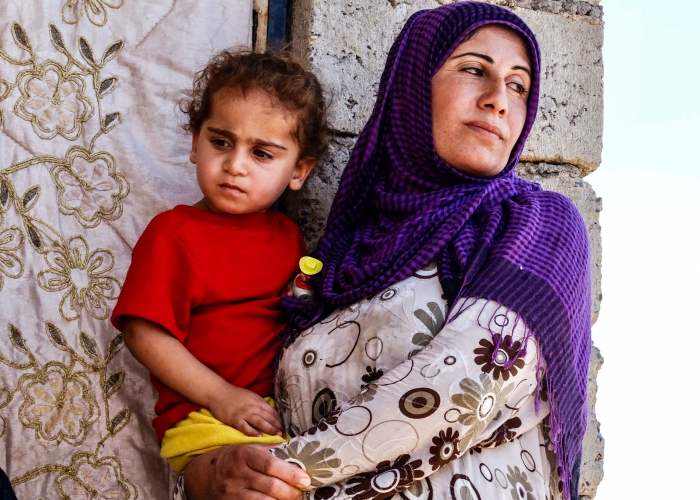 Sami, 28, asked that his name be changed for fear of reprisals. He had arrived in Shirqat from a village near Hawija on the same day he spoke to IRIN.

Along with several other male arrivals, Sami was lounging outside the main door of the bare concrete building being used as a reception centre in the middle of Shirqat, across from a military post. Sporting sandals and nylon track pants, Sami wore a thick beard, moustache shaved – IS militants demanded that all men grow their beards this way.

Sami noted that the visual IS presence in Hawija had become thinner in recent months as drones and airplanes flew over, striking the militants. The fighters hid out of view most of the time, fearing airstrikes. Yet still, residents felt they were being surveyed by IS, and public executions and whippings struck enough terror among the populace that few considered fleeing.

“They don’t stop you [from fleeing],” he explained. “But it’s fear. Fear of [IS]. Fear of being killed, that stops us. They’ve taken many who tried to flee, accused them, and executed them.”

“I was waiting for death. Each minute, I expected it,” he said, coldly.

Eventually, Sami chanced it. But he said that even for those who did manage to get beyond the grasp of the IS militants holding Hawija, there was still extreme danger.

His brother fled the city six months earlier to some nearby mountains. “They were walking, and a family of 15 stepped on a mine. The mine exploded and not one of them survived,” his brother told him. “Many people escaping through the mountains have died that way.”

Even for those who do make it out all the way to Shirqat, there’s not much of a welcome. Many of those caring for the escapees are volunteers, working with extremely limited resources to fill the gaps in responding to a humanitarian crisis that has pushed Iraq beyond breaking point.

Wa’ed Karaf, 45, was an employee at the Ministry of Manufacturing and Metals before the conflict with IS. He receives people displaced from Hawija on a daily basis at the reception centre he established in late 2016, working in collaboration with the child-focused Swiss relief agency Terre des hommes.

Karaf noted the spread of destructive and painful diseases among those trapped in Hawija with no medicine, like diarrhoea, scabies, shingles and Ischaemia, which can cause tissue damage and even the loss of limbs.

“There is a problem of government neglect here in Salah al-Din province,” he told IRIN. “There are supposed to be a lot of organisations here working with the displaced. But we haven’t seen anything being implemented on the ground.

“All we have here is the [UK-based NGO] Muslim Aid distributing food. The Ministry of Migration and Displacement gives some assistance, but it’s very little.” 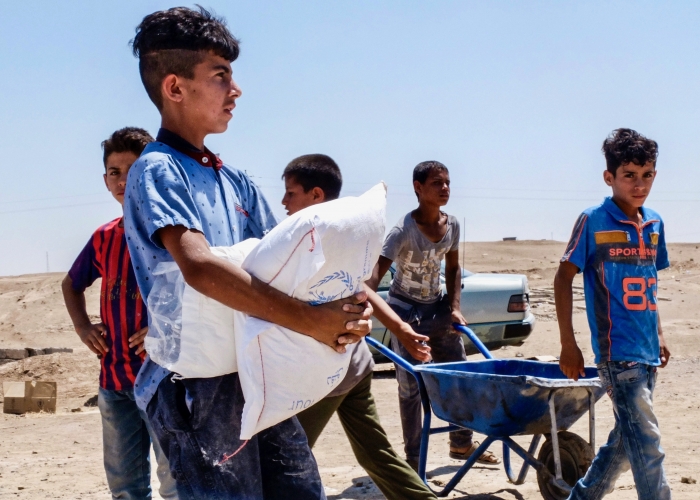 Karaf accused the central government of purposefully neglecting Salah al-Din province, where Shirqat is, because it has a large Sunni population. Sunnis make up about a quarter of Iraq’s populace, but many complain that since the overthrow of Saddam Hussein in 2003 they’ve been increasingly marginalised by the Shia-majority government.

Karaf had little faith in the ability of the Baghdad government to bring life back to the area and get the displaced back on their feet, even when Hawija is eventually liberated. The greatest impediment, according to him, is the Iraqi politicians themselves.

“They make special deals. [In this area], the electricity is bad. [There are] almost no health services, little to no municipal services. Billions of dollars spent in Iraq since 2003, but where did it go?” he asked.

Caroline Gluck, a senior public information officer with the UN’s refugee agency, UNHCR, took issue with Karaf’s claims that no services were being provided in Shirqat other than by Muslim Aid.

She said UNHCR had accommodated the majority of the displaced families from Hawija in six nearby camps and stressed not only the involvement of UNHCR and other UN agencies but also of the Iraqi government.

Gluck said many of those who managed to escape Hawija still faced hunger and poor health in their host communities. Along with the rest of the country’s three million internally displaced people, they also have to overcome significant bureaucratic hurdles before they can even think about getting their lives back on track.

“When people come out of Hawija, often they have no documents with them,” Gluck said. “And without their national identity cards, it’s extremely difficult to access services as well as get through checkpoints. Having documents is vital for getting children to school and hospitals [after they’ve been displaced].”

What does the future hold?

Last month, IRIN caught up with Brigadier General Hayder al-Darradi, commander of the Iraqi Army’s 60th Brigade, reposing on a plastic chair on the terrace of the mayor’s home in Shirqat, after he and his brigade had returned from a midnight patrol along the Tigris.

“According to what we know about the plan, immediately after the end of Ramadan, we will begin to liberate Hawija,” he said.

That time has come and gone, but the army has yet to move in.

A Sunni Arab town in the Kurdish-majority governorate of Kirkuk, Hawija has had a troubled history, which may be delaying the operation and increasing fears about sectarian tensions after the fighting is over.

In 2013, protests rocked the small city. They drew Sunni Arabs into the streets to decry systematic marginalisation by the largely Shia-led government in Baghdad, at the time presided over by Nouri al-Maliki. Dozens of protestors were killed by security forces.

Saieb al-Gaylani, senior facilitator and peace builder with the United States Institute for Peace, told IRIN any move on Hawija would likely be last on the list because Iraqi leaders hadn’t decided what to do with the area.

“They are still talking about who will do what after liberation – who will stay, and who will wield power there,” he said. “They still have not sat together and answered these many questions.”

Joel Wing, a writer and analyst at the Musings on Iraq blog, saw the competing forces surrounding Hawija as another major issue.

They’ll be seeking prestige, Wing said, each unit chasing the highest number of IS militants killed or villages taken.

But the greatest coming danger to the people of Hawija is the possibility for revenge against those believed to have backed IS, said al-Gailani. “I am expecting it to happen in Hawija. But by threatening or killing those [some civilians] feel might have supported IS, they are creating a new IS. Punishment is not the job of tribes or militias. It is the job of the law.”

His fears have been borne out, at least to some extent, in other parts of Iraq: There have been reported executions of men fleeing Mosul and militias were accused of serious abuses against civilians after the liberation of Fallujah.

Brigadier General al-Darradi, himself a Shia from Baghdad, was dismissive of the possibility of revenge attacks on the Sunnis of Hawija.

Sami, the recent Hawija escapee in Shirqat, wanted to return home and dared to look toward a better future.

“I want security,” he said. “And I want our people to be unified. I want them to love one another. And I don’t want us to be afraid – we’ve been silent when we see something going wrong. We can’t be silent anymore. This is what I hope.”

(TOP PHOTO: Recently displaced women from a village near Hawija outside an aid distribution centre in Shirqat. Sam Kimball/IRIN)