If you are a refugee, then Uganda is one of the better places to be. Refugees and asylum seekers are entitled to work, have freedom of movement, and can access social services – a progressive policy much-lauded by the international community.

But while in theory refugees don’t have to remain trapped in vast camps on the country’s borders, the reality is that many don’t have the skills or wherewithal to find work or set up businesses outside of sprawling refugee settlements.

Uganda is now sheltering over a million refugees and asylum seekers. More than 800,000 are South Sudanese, and 572,000 of that number are new arrivals who have escaped their country’s civil war and growing food crisis since July last year.

The vast majority are housed in refugee settlements in Uganda’s north. There they are allocated plots of land and given materials to build a basic home, as well as food aid and access to basic health and education services.

“The refugee policy in Uganda is that you get assistance when you are in the settlement,” explained Moses Nsubuga from the Refugee Law Project, a Kampala-based NGO. “The moment you leave the settlement and choose to live in an urban centre like Kampala, they expect you to fend for yourself.”

Kampala is now home to 90,000 refugees and asylum seekers mainly from the Democratic Republic of the Congo, Burundi and Somalia. According to the government, numbers have increased by more than 20 percent since last year.

South Sudanese, who through 60 years of turmoil have long had links to Uganda, number around 10,776, according to the prime minister's office.

Joyce Keji* fled South Sudan for Uganda with her four children when fighting between forces loyal to President Salva Kiir and then First Vice President Riek Machar re-ignited in July 2016.

The final straw was when her home in the capital, Juba, was looted by government soldiers, and her life was threatened.

“They went inside and broke the wardrobe, took things from my children’s rooms, the mattresses and took the keys for the car,” she recalled. “They took everything.”

While her husband, an engineer, stayed behind in Juba, Joyce headed to the Ugandan capital with her children. But it’s been tough to establish herself in Kampala. Living with a friend, she does cleaning jobs to get by, but it’s hardly enough.

“At the time I arrived it was hard for me. I didn’t know the place, and everything was difficult,” she told IRIN. “Now at least I am getting used to it [but] we are suffering. The security is fine, but hunger is there.”

Keji was a market trader in Juba, so has a business background. To break through in Kampala, she is pinning her hopes on a hairdressing training programme she has enrolled on, run by the Jesuit Refugee Service (JRS).

Inside the cramped JRS training salon, groups get to grips with plaiting and weaving techniques while others volunteer to be models for the latest styling lesson.

“My hope is to do the course, and when I succeed and have finished learning, I want to open my own salon and earn some money,” said Keji. But without capital, it remains a long-term goal.

Training courses can help new arrivals to take advantage of the country’s progressive refugee policy. But any notion that it’s easy for urban refugees to get on their feet would be a mistake. "The fact is that the majority of refugees in Uganda live at subsistence level," according to David Kigozi of the International Refugee Rights Initiative. 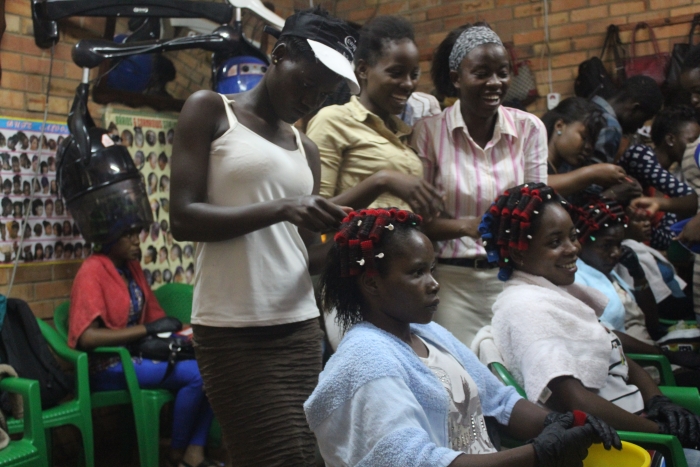 Chris Matthews/IRIN
Trying to get ahead

The challenges of surviving the city are something Keji’s fellow student, Beatrice Taban*, who came from South Sudan last year with her aunt, is acutely aware of.

Her mother and sisters live in a refugee settlement and the 25-year-old has not seen them in almost a year. But she says it would be too difficult for them to join her.

“There is a problem if they meet us here,” said Taban. “Here you have to pay bills and it is very difficult. If I get work and I feel comfortable, they can come and see me.”

The conflict across the border is hurting Uganda’s economy. The ministry of finance has warned of a slowdown in the traditionally strong export market because of the collapse in demand in South Sudan. Meanwhile, a drought has seen a hike in food prices. With 22 percent of youths jobless, sustaining a life in the city is becoming harder.

“Ugandans already do not have jobs, and so it is hard right now for refugees to get work,” said Nsubuga of the Refugee Law Project.

Alongside the economic hardships, Kampala’s South Sudanese population have to deal with occassionally frosty locals, some whom have negative perceptions of their northern neighbours.

“[Those] who come here are very rich and they stay in hotels and they do not leave,” said a motorbike taxi driver, describing the pre-civil war stereotype of aggressive and flashy South Sudanese.

It’s a perception based on the ministers and military commanders who, after independence in 2013, bought property and relocated their families to Kampala to take advantage of the comfortable lifestyle.

But, said Augustine Gatwal, a South Sudanese who has lived mainly in Uganda since 2007, such stereotypes definitely don’t fit the profile of the refugees fleeing the current crisis.

“I can estimate that almost 50 percent of South Sudanese households in Kampala have gone to refugee camps because they can no longer afford to pay rent and take their children to school,” he told IRIN.

Gatwal runs Young-adult Empowerment Initiative, a charity aimed at helping women and young people from his country to acclimatise to life in both the settlements and Kampala.

“We work on issues to do with peace because when they come they are very hostile,” he explained. “To adapt to a peaceful environment is very difficult and many have post-war trauma and have seen a lot of issues that have disturbed them.”

But there is a larger threat to Uganda’s open-door refugee policy. Last month, the UN High Commissioner for Refugees Filippo Grandi warned that the scale of the flow of refugees out of South Sudan risks overwhelming Uganda and that there is an urgent need for more financial support from the international community.

UNHCR has appealed for roughly $501 million to cover its operations in Uganda this year. So far it has received only $73 million - just 15 percent. “We are at breaking point. Uganda cannot handle Africa’s largest refugee crisis alone,” said Grandi.