For Ismail Jamaat, a science teacher at Tanjung primary school, going to work can feel like entering a war zone. Over the past decade, his government school has three times endured firebomb attacks. In 2013, Ismail, along with scores of schoolchildren, had to witness the murder of his friend and colleague Cholathee Charoenchol by masked gunmen in the school cafeteria.

Tanjung is one of more than 1,200 government schools in Thailand’s so called ‘Deep South’, where a deadly sectarian conflict between ethnic Malay Muslims and their Thai Buddhist countrymen has left more than 6,500 dead since 2004. With nearly 200 teachers assassinated and 300 government schools razed over the past decade, education in the region is a critical issue. 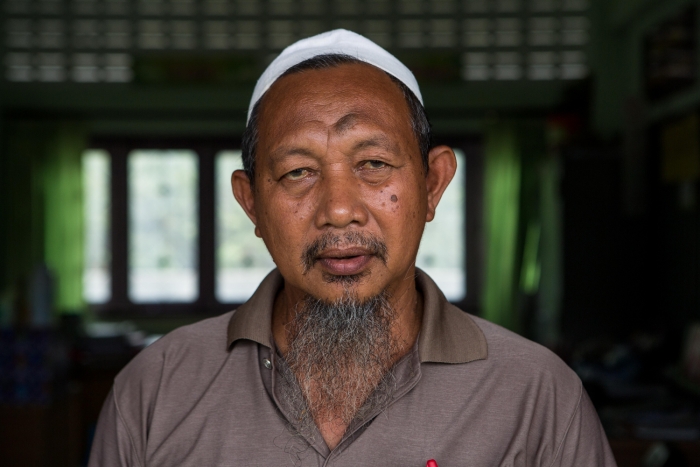 Amanda Mustard/IRIN
Ismail Jamaat has taught at Tanjung primary school for 29 years, many of them marred by violence

Its segregated nature also taps into the deep-rooted grievances that fuel the conflict. Four in five of the 1.8 million people living in the Deep South identify as Muslim, in a country that is more than 93 percent Buddhist overall.

“When you have this feeling that government schools belong to the Thai, and [Islamic schools] are for Patani [the ethnic Malay Muslim population], then what do you think happens?” Ismail asked rhetorically.

He is not alone in believing that the consistent attacks on government schools and their staff are, at least in part, down to the growing divide in the Deep South’s education policy, one in which the perception of threatened Patani identity has stretched to incorporate the language of the classroom.

In an exhaustive 2012 report into the conflict in southern Thailand, the International Crisis Group highlighted the “marginalisation of [Deep South] culture, history, religion and language” as a major force fuelling the violence.

The education policy has long embittered the majority Patani-Malay speaking community of Thailand’s four southernmost provinces. As well as consistently producing some of the poorest literacy scores in the country, families in the south see the enforced Thai-language curriculum as an attempt to further marginalise a key facet of their own identity: their own language. 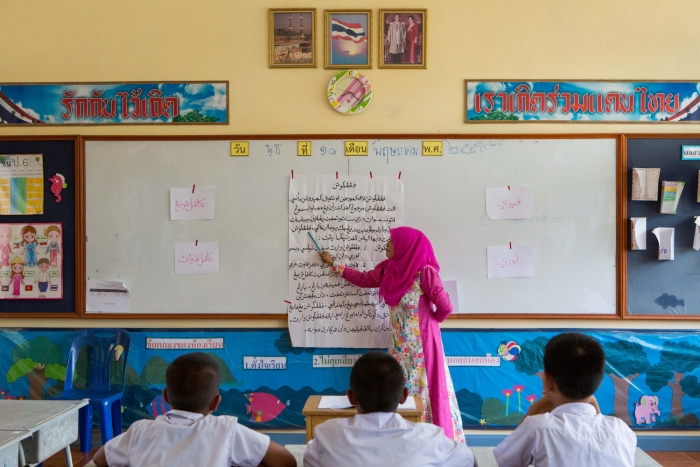 Amanda Mustard/IRIN
Lessons in Arabic at Banbuengnamsai primary school, a participant in the pilot programme

Suwilai Premsrirat, a professor of linguistics at Thailand’s Mahidol University, hopes the pilot programme she launched 10 years ago will provide the long-term solution. The idea itself is simple: integrate the Patani-Malay languages, spoken (at least at home) by 83 percent of the Deep South population, into the classroom.

Written in an alphabet based on Arabic script, Patani-Malay languages are completely different from Standard Thai. And unlike in Malaysia, nobody in Thailand is required to learn Standard Malay, making the gulf between Thai and Patani-Malay speakers even wider.

With nearly a decade’s worth of research from 16 schools, the results from Premsrirat’s programme, which finished in March, are encouraging. “We consider it a success,” she told IRIN. “We want to make it [clear] we respect [Patani-Malay language and culture].”

By Grade 1 (age six to seven), the research showed that on average (across the schools) 58 percent of the children were scoring 70 percent or higher in areas of bilingual comprehension, compared with just 18 percent scoring similar marks in control schools.

By intermingling the various dialects, languages and scripts of the Deep South, Suwilai found herself at the heart of the region’s identity conflict. Immediately, she encountered problems from both Muslim communities and the central government.

“Some [in the Muslim communities] think this is a way to destroy their Islamic identity,” Suwilai said, referring to the use of Thai characters for Patani-Malay words in kindergarten.

At the other end of the spectrum, the Thai government, which originally asked Suwilai to research a programme, became sceptical of her approach once Arabic script was introduced to the curriculum. She recalled an irate call from a man she believed was from the Ministry of Education. “I got a phone call… he talked a lot, complaining and saying ‘this is not a good idea’.”

A legacy of mental health problems

But Suwilai and her team are determined to use the promising research to lobby officials so the programme is rolled out more broadly. “They cannot deny the results,” she said.

For the professor, the biggest obstacle will be whether the capricious politics of Bangkok can remain stable long enough for her team to make their case.

The ruling military junta in Thailand has promised elections in 2017 but the country is being torn apart by a bitter political schism. On one side are the royalist elite, Bangkok’s bourgeoisie, the judiciary and the military, while on the other are loyalists of two former premiers (siblings Thaksin and Yingluck Shinawatra) from an emerging provincial middle class, supported by the working class, rural voters, and the police. 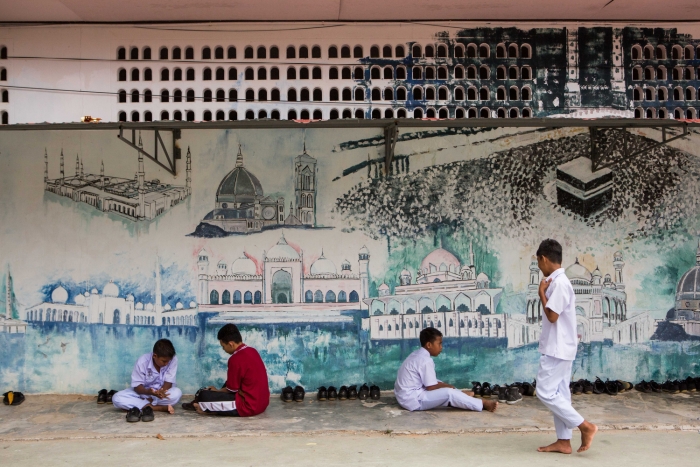 Amanda Mustard/IRIN
Four in five of the 1.8 million people living in the Deep South identify as Muslim, in a country that is more than 93 percent Buddhist overall

If the politicians and the military are not careful, Suwilai worries that the usual machinations in Bangkok will mean a big opportunity is missed to address the ills of the Deep South.

Less than an hour's drive from Tanjung School sits Banbuengnamsai primary school. Palm trees sway outside the windows while in one class a child nervously reads her text out loud to her schoolmates, who occasionally giggle at any mistake. At first glance, it looks like any other government school in rural Thailand.

But as one of the first schools to accept the pilot programme curriculum, the difference with Banbuengnamsai lies in the classroom. In one class the children practise their handwriting, but instead of Thai, the script is Arabic. Above the whiteboard, a photo of the Thai flag is flanked on one side by the obligatory portrait of the Thai King, but on the other by a photo of the Ka’ba, the holiest site in Islam.

Mrs Hareena, a teacher at the school for 11 years, said the change was a shock, at least initially.

“At first, I felt so strange to include [Patani-Malay]! Before, we just taught Thai.”

But it didn’t take long for Hareena to realise the benefits of the new system. “You can see [the students] are understanding better now,” she told IRIN.

Now that the programme is officially over, none of the 16 schools from the pilot are obliged to continue with the curriculum, but Hareena is adamant that they should.

“I want to continue from this point on... We should all continue on.”

(TOP PHOTO: Students at Tanjung raise their hands when asked who had witnessed the 2013 killing of their teacher.  Amanda Mustard/IRIN)