In a picture purportedly uploaded to his Facebook page, which has since been deleted, the 31-year-old Syrian stands smiling in front of a car park that is traceable to Stockholm because of a phone number in the background. It’s an innocuous image, like the thousands of others uploaded by refugees after they successfully reach Europe — an announcement that they’ve made it; the beginning of a new life. 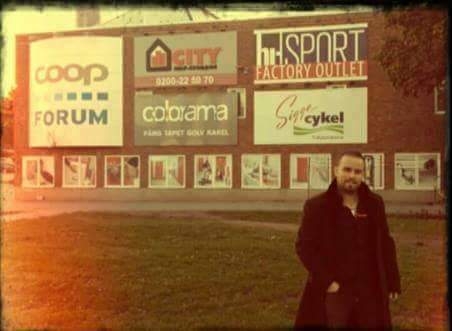 But there were other photos too – images from Abdullah’s past that, by November last year, were being circulated by activists and other refugees.

In one, Abdullah is standing with his boot on the corpse of a man in civilian clothing surrounded by other corpses. He is looking directly into the camera, a grim half-smile on his face. 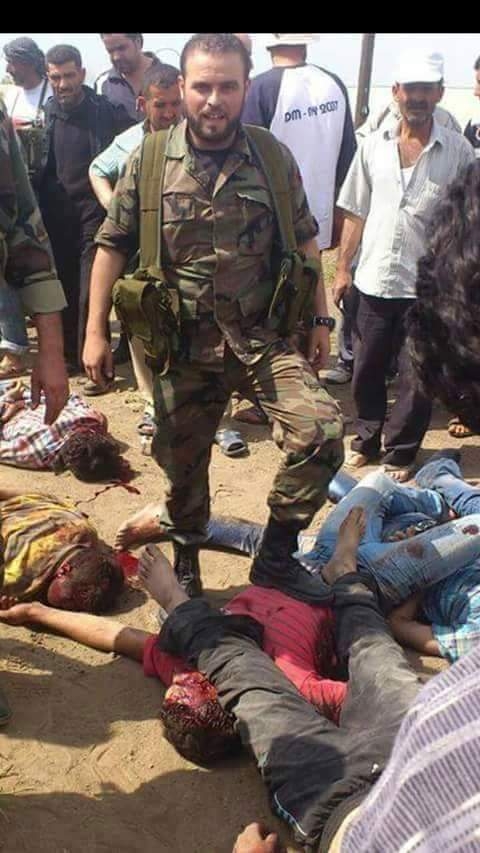 The Facebook picture that landed Mohamed Abdullah in a Swedish court

Another photograph shows a special forces badge on Abdullah’s left arm, which Syrian activists claim identifies him as a member of Division 14, a unit alleged to have committed atrocities during the 2012 siege of Homs.

Syrian-run website Mujremon posted the pictures, and Ammar*, a Palestinian refugee from Syria now living in Sweden, tweeted them, along with a request for help from other Syrians in the country to find and report Abdullah to the Swedish authorities.

"This guy had a picture clearly showing he was in Sweden; and in the other photo, he was clearly standing on bodies… looking proud about it."

“It was a big shock for me,” Ammar told IRIN, explaining his decision. "This guy had a picture clearly showing he was in Sweden; and in the other photo, he was clearly standing on bodies… looking proud about it. And now this guy’s in Sweden taking the Metro like other people, seeking asylum like other people, when it’s people like him who actually caused this crisis.”

A fellow Palestinian-Syrian, also in Sweden, eventually contacted the national prosecutor about Abdullah. Three or four months after first posting the image, Ammar says he got a call from the police asking him to help track down witnesses.

Abdullah was found and appeared in a Stockholm court in February, accused of war crimes committed between 2012 and 2015. He reportedly admitted working for the Syrian regime, but denied ever participating as a fighter. The case was eventually dismissed due to a lack of corroborating witnesses. Abdullah was released last month and his current whereabouts are unknown.

Six months ago, Ben Davies, a British journalist and activist filmmaker who visited Syria in 2013, began documenting cases of alleged Syrian war criminals who had made it to Europe. His blog features dozens of them, but he estimates there could be as many as 2,000 in Europe. One of the men on his blog is a soldier in the Syrian Army who was once filmed on the frontlines during a photo-op with President Bashar al-Assad. In another, an Armenian Christian militia fighter from Aleppo is shown proudly holding an Uzi. Both men are now thought to be in Germany.

“Sometimes, I find people myself by following their Facebook pages and seeing what they’re doing. But a lot of the time, Syrians have already found these people and they message me and ask for help in sharing the evidence,” Davies explained.

“In Europe, [Syrians] are meant to feel safe as refugees. How are we giving them safety when we’re ignoring the people who caused their suffering and who are now following them?”

In October 2013, a group of prosecutors, investigators and NGOs from around the EU came together to discuss the deteriorating situation in Syria.

The meeting was hosted by the “Genocide Network” – formed in 2004 to provide a platform for prosecutors and practitioners from EU member states to exchange information, cases and best practices for trying serious international crimes. Among the network’s key aims was the formation of specialised national units for investigating and prosecuting crimes like genocide through the legal principle of universal jurisdiction.

See: The beginnings of transitional justice in Syria

The meeting in 2013, which has since become an annual fixture, involved such units from around the EU, as well as international teams working specifically on war crimes in Syria: Human Rights Watch; former US State Department ambassador-at-large for war crimes Stephen Rapp; and representatives from the Commission for International Justice and Accountability, which in the past four years has accrued more than 600,000 government documents from Syria — many of them smuggled out by investigators and regime defectors.

"We took the initiative to address the [Syrian] conflict as it was happening. We saw that this conflict would have an effect on EU jurisdictions,” explained Matevž Pezdirc, a Slovenian war crimes practitioner who heads the network’s secretariat at The Hague. “It was very much understood then that due to the close proximity of the conflict, geographically, there would be potential cases in the future.”

The network was effectively preparing for the possibility that, as more and more refugees fled Syria and possibly made their way to Europe, they might be joined by defectors, former combatants, even war criminals. European states exercising universal jurisdiction could then prosecute those found on European soil.

Three years later, their preparations are paying off.

“You can’t really say that we predicted it — one million [asylum seekers arriving in Europe] in 2015, who can predict that?” said Pezdirc. “But you could definitely predict that there would be refugees.”

“It was similar in the Balkan wars. You had a huge displacement of refugees and later on cases from amongst that group,” Pezdirc added.

Since the Genocide Network’s first meeting, prosecutors and investigators in Europe have started closing in on small numbers of suspects from Syria.

In January, Sigurd Moe, superintendent of the war crimes section at Norway’s National Criminal Investigation Service, told Reuters that police were “taking a closer look at around 20 individuals, and… assessing whether there is a basis to start an investigation.”

A spokesperson from Germany's Bundeskriminalamt (BKA), the agency responsible for investigating international crimes, told IRIN there had been a “significant increase” in tip-offs about alleged war criminals from immigration authorities and other asylum seekers since last year’s unprecedented wave of arrivals. To date, there have been more than 2,000 such tip-offs and 13 preliminary investigations launched.

On 6 April, German police arrested a Syrian national on war crimes charges. The man, thought to have led a 150-man militia affiliated with the Ghurabaa’ al-Sham (“Strangers of the Levant”) brigade in Aleppo, is strongly suspected of treating civilians “cruelly and inhumanely” in the autumn of 2012, as well as torturing people “who tried to protect their neighbouring district from plundering”, according to the prosecutors.

Other European countries are also starting to prosecute Syrian war criminals. Last year, a Swedish court sentenced Mohannad Droubi, a former Free Syrian Army fighter, to five years’ imprisonment for the torture in 2012 of a man thought to be affiliated with Syrian government forces. The case started when an acquaintance of Droubi’s from Syria alerted the police to a video of the torture on Facebook.

Prosecutor Reena Devgun, who works at Sweden’s International Prosecution Office in Stockholm, says they are expecting a further increase in tip-offs in the coming year. “We do believe that there will be more reports — although that doesn’t mean that there’ll be more convictions,” she said.

Investigating crimes committed in Syria presents obvious challenges. The ongoing conflict means investigators can’t conduct crime scene investigations, and there’s no authority there that they can call on to help them. Finding witnesses from Syria to corroborate and verify allegations can also be tough, Devgun admitted.

“In that sense, it is very difficult, but that doesn’t mean that it’s impossible,” she told IRIN.

News about the presence of alleged Syrian war criminals on European soil risks providing far-right and anti-immigration groups with ammunition in their fight against open borders for asylum seekers, but there is little evidence to suggest that people like Abdullah pose a security threat to Europe.

In fact, the movement of comparatively small numbers of foreign war crimes suspects into Europe is nothing new, while European authorities are now better prepared to deal with the issue.

“Now you have more specialised units, more sensibility, more awareness,” the Genocide Network’s Pezdirc said. “These are structures that weren’t in place in the Nineties.”

Prosecutors, investigators, activists and refugees who help with investigations tend to talk about the issue in terms of international justice rather than security concerns or counter-terrorism measures.

Ahmad, a Palestinian-Syrian from the Yarmouk refugee district of Damascus who is waiting for an asylum decision in northern Europe, told IRIN about his feelings of injustice on hearing that former pro-regime combatants are claiming asylum in Europe.

“They forced us out of our homes, stole and killed people, and then they come to claim asylum, like us?” he said. “They are the reason we are refugees.”