Pregnant and breastfeeding women are the demographic group most at risk of malnutrition in South Sudan after children, making up some 12 percent of all those on supplementary feeding programmes.

Such women’s vulnerability can be largely attributed to the higher nutritional needs associated with supporting a foetus or nursing an infant.

But there is also a social component. In a country with strict gender roles, women do more physical labour than men, but may not get as much food. Pregnant women traditionally refrain from eating certain high-nutrition foods, such as eggs and liver, for (misplaced) fear they could cause birth defects. Women have little say in family planning decisions even during lean times.

They also often go without food so their children have enough.

"I can't take more than my children," explains Khadija,* a malnourished mother of four, a refugee from a rebel war in neighbouring Sudan who now lives in Fashoda County of South Sudan's Upper Nile State.

(A separate civil war has been raging in several parts of South Sudan since December 2013.)

Nursing her youngest, a boy of six months, she said: "I don't like to see my children suffering more than me."

While providing additional food is the first line of defence against malnutrition, it also important to educate both men and women about how to attain adequate nutrition for mothers.

"Malnutrition persists because there is a cultural line to doing things," says Zahra Mokgosi, gender adviser for the World Food Programme. "Fighting patriarchy is like changing the status of the culture...we really have to work with women, the community leaders, with the religious leaders."

Fashoda has only moderate rates food insecurity, nutritionists here say, so the fact that even here there are cases of severe malnutrition among pregnant and lactating women shows the fragility of that group's health.

Adult deaths from malnutrition are extremely rare, but malnourishment can have negative effects on pregnant or lactating women and their children.

Malnourished women can experience prolonged labour because they may not have the energy to push the baby out, and malnourished mothers often give birth to malnourished babies.

"Nutrition starts in utero," says Carol Kaburu, a nurse in the ante-natal clinic in Fashoda's hospital run by the International Committee of the Red Cross. Kaburu warns that poor nutrition can lead to birth complications.

"If you are not well nourished, you get anaemia, then when you give birth you will have low haemoglobin levels and you will tend to bleed a lot. So nutrition is key in pregnancy."

Day to day, being pregnant without enough to eat is exhausting.

"It's like I'm sick, but I'm not sick," says Angelina,* a malnourished mother in Fashoda who is seven months pregnant. "Talking is not easy. When I start to move to work, my head spins. I can even fall down."

Angelina eats just one meal a day, a half kilo of sorghum made into porridge shared with her husband and child. Sometimes two spoons are all that's left for her once the rest of her family finishes eating, she says.

A half kilo of sorghum seeds, when ground and made into porridge, is all some families share for their daily meal. Food. Nutrition. 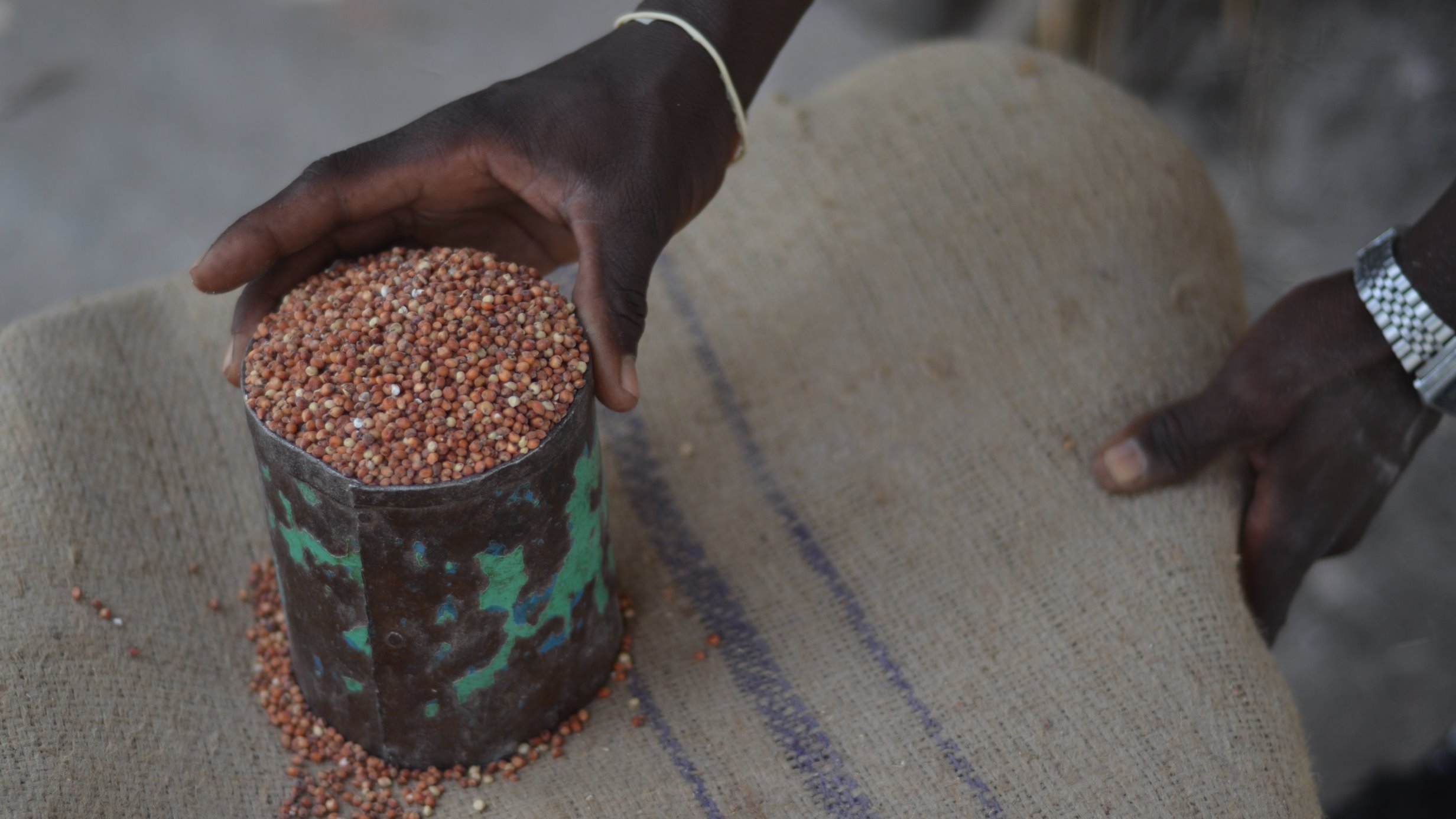 "Women have to look for firewood, they have to cook what little they have, they have to wash, there is quite a range of activities they are doing using their energy so their nutritional status is a bit low," says Joel Makii, a nutrition adviser in South Sudan with CARE International. "Men, they don't engage in a lot of manual jobs, they just sit and chat."

With few jobs available, but children to feed, women each day walk up to an hour to forests where they cut logs before transporting the loads on their heads. When sold, the wood is worth enough to buy a kilo or so of flour.

Most men refuse to help in the endeavour because it is seen as women's work.

"In our culture men cannot collect firewood," says Mary*, a nursing mother of three whose left bicep measures less than 21 cm around, an indicator of severe malnourishment. "The men will not share the work, even if I'm not feeling well."

Mary says on days she is too weak to cut wood, she begs from neighbours.

Even when there is enough food, pregnant South Sudanese women may not be able to access the nutrition they need.

Each month since January, pregnant and lactating women in Fashoda whose middle upper arms measure less than 23 cm around have received an additional 7.5 kg of an enriched corn-soy blend from World Vision.

The extra food appears to have contributed to declines in malnutrition among mothers in the area, but it may take months for the women to fully recover.

The supplement doesn't address more unpredictable needs of a pregnancy. Angelina, in her third trimester, says lately she's craved potatoes and tomatoes with no recourse. Mothers often give the corn-soy blend to their children.

"We try to discourage them from sharing," says Dorothy Matyatya, World Vision's head nutritionist in Fashoda. "You know women being women they would want to share everything with their children."

Food handouts also address only one side of the malnutrition equation.

"It's not just about food," says Kaburu, the nurse at ICRC's ante-natal clinic. Kaburu says pregnant women need deworming pills in case there are parasites which divert nutrition from the mother. They need Vitamin A too, and to fight anaemia, iron supplements and mosquito nets which prevent malaria.

With only one hospital in Fashoda distributing all these supplements, not all women get what they need. Malnourished women may not know to seek medicine when their immediate concern is food, yet the nutrition program doesn't always refer them to the ante-natal clinic.

"Unless you have a [medical] problem you don't get medical care," Kaburu says.

A potential longer term solution to malnourishment among pregnant and lactating women is better family planning, but men often control such decisions, and contraception is rare and even scorned in deeply religious South Sudan.

Angelina, who became pregnant after South Sudan's conflict began, said she'd rather have waited for a more stable time to have a child.

"If I could choose I wouldn't have become pregnant during a war," she says.

Mokgosi from WFP says her organization attempts to work with men to improve nutrition access for women, but the process is slow.

Men at times react with hostility at suggestions to change entrenched customs, she says. South Sudan’s low levels of development exacerbates the challenge.

“When you explain to an educated person that if you don’t feed your wife she’ll have teeth rotting [due to lack of nutrients], you’re talking to someone who understands what calcium is and what iron is,” she says. “But if you are talking to someone who says, ‘my mother and father used to say all the invited guests must eat first before the mother,’ these are barriers that are related to education, to poverty.”

* names have been changed