He joins at a time when the UN is grappling with unprecedented humanitarian challenges: there are now four concurrent Level 3 emergencies - the UN’s most serious classification - in Syria, Iraq, Central African Republic and South Sudan.

O’Brien’s appointment - made public late on Monday - ends months of speculation about Amos’s successor. So far, the married father-of-three, who currently serves as British Prime Minister David Cameron’s envoy to the Sahel region, has received a warm – if not gushing - reception.

“Better than expected," one humanitarian professional told IRIN. "Could have been worse,” commented another.

Alexander Betts, director of the Refugee Studies Centre at the University of Oxford, said: “He has a background working on issues such as malaria and international trade and he has voiced opinions about questions relating to humanitarian affairs.

“I do think it will be a steep learning curve to go from a junior ministerial position to become the most senior humanitarian official in the UN system, but I wish him well in his new post.”

Anne Street, head of humanitarian policy at Catholic aid agency CAFOD, was more optimistic: “We welcome Stephen O’Brien. He was a good junior minister at the UK’s Department for International Development [and] is very committed to international development."

However, the news of O’Brien’s appointment has been, to some extent, overshadowed by the row about the wider selection process and the unwritten rule that the senior UN posts are shared among permanent members of the Security Council.

The fact that the Secretary-General would not search for the most suitable individual candidate is disappointing.

Not long after Amos signaled her intention to step down after five years at OCHA’s helm, it emerged that British Prime Minister David Cameron had put forward to Secretary-General Ban Ki-moon his former health minister Andrew Lansley as a possible successor.

A close friend of Cameron, Lansley was an unpopular choice, both due to his lack of international experience and his disliked reforms of the British National Health Service (NHS).

In December, more than 80 leading NGOs, including Oxfam and Save the Children, co-signed a letter to Ban stressing the complexity of current crises and calling for a “highly qualified and experienced humanitarian leader” to lead OCHA.

Less diplomatically, an online petition by campaign group Avaaz urged Ban not to appoint Lansley. Some 70,000 people signed it in a matter of weeks.

Following this outcry, according to a senior humanitarian analyst, Ban asked Cameron to put forward an alternative candidate. At that point, O’Brien and a second British MP, Caroline Spelman, joined the race, according to Inner City Press. 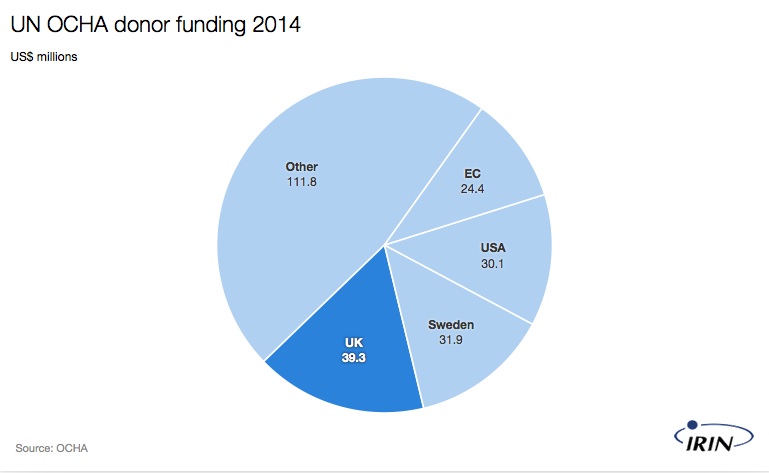 Martin Kobler, currently Ban’s special representative in the Democratic Republic of Congo (DRC), and Sheikha Lubna Bint Khalid Al Qasimi, the United Arab Emirates’ minister of international cooperation and development, were also reported to be in the running, although due to the secrecy surrounding the process, no candidates’ names were ever officially confirmed to IRIN.

There have long been concerns around the lack of transparency and oversight around senior UN appointments.

Similar questions were raised ahead of Amos' selection in 2010. This time, in a move to calm NGO unease, the Secretary-General reportedly invited the president of the International Committee of the Red Cross (ICRC), Peter Maurer, to assist in the selection process.

Despite this concession, the latest appointment process has reignited questions about how candidates are put forward by political leaders, rather than an open application process based on merit.

In reaction to the news of O’Brien’s appointment, Avaaz noted: “People power may have stopped Lansley, but the battle to stop UN jobs being decided by political patronage rather than meritocracy continues.”

Martin Barber, a UN veteran and author of Blinded by Humanity, a 2014 book on the organisation’s humanitarian work, told IRIN: "The fact that the Secretary-General would not search for the most suitable individual candidate is disappointing."

He added that the post should not be filled by a permanent member of the Security Council because "it can potentially compromise the perception of impartiality of the UN's humanitarian action."

Another humanitarian expert told IRIN: “I don’t doubt O’Brien will approach the job with the utmost professionalism and integrity, but out of all the all the humanitarians in the world capable of taking on this role, was he really the best candidate out there?”

A member of the UK’s ruling Conservative party, O’Brien has been an elected member of parliament for 15 years, serving as Under Secretary of State for International Development between 2010 and 2012. He founded and, since 2004, has chaired the All-Party Parliamentary Group on Malaria and Neglected Tropical Diseases.