It’s the usual mix of panel discussions, presentations, reports and opinions, with pop stars lining up alongside presidents, academics and bankers to give their views on the world’s conundrums and opportunities.

Topics on the agenda this year include Ebola, refugee resilience, climate change, inequality, borders and migration, and the increasingly urgent question: is the humanitarian system in crisis?

Over the years, WEF has evolved from an exclusive meet-and-greet for the rich and powerful to discuss the state of global finances to an inclusive gathering that has become an important sounding board for the UN, NGOs and other social activists. These days, they tend to speak on stage rather than protest outside.

A lot of reports are already online and thanks to live-streaming, you no longer need a golden ticket to hear the discussions.

The Global Risks report is one of the flagship publications being launched at WEF this week. Based on a survey of 900 WEF members, the report maps out social, geo-political and environmental risks, studying their likelihood and impact and examining steps that can be taken to manage these risks. Water crises, interstate conflict and infectious diseases top the chart.

UNICEF: The Case for Education and Equity

UNICEF is launching The Investment Case for Education and Equity, a new report looking at why millions of students cannot access good education, or indeed any at all, despite global efforts to address the problem. Among the panelists are Angelique Kidjo, musician and UNICEF Goodwill Ambassador; Yoka Brandt, UNICEF Deputy Executive Director; and former British Prime Minister Gordon Brown.

Infographic from The Global Risks Report 2015 at WEF Based on a survey of 900 World Economic Forum members, the report maps out social, geo-political and environmental risks, studying their likelihood and impact, as well looking at what steps can be ta 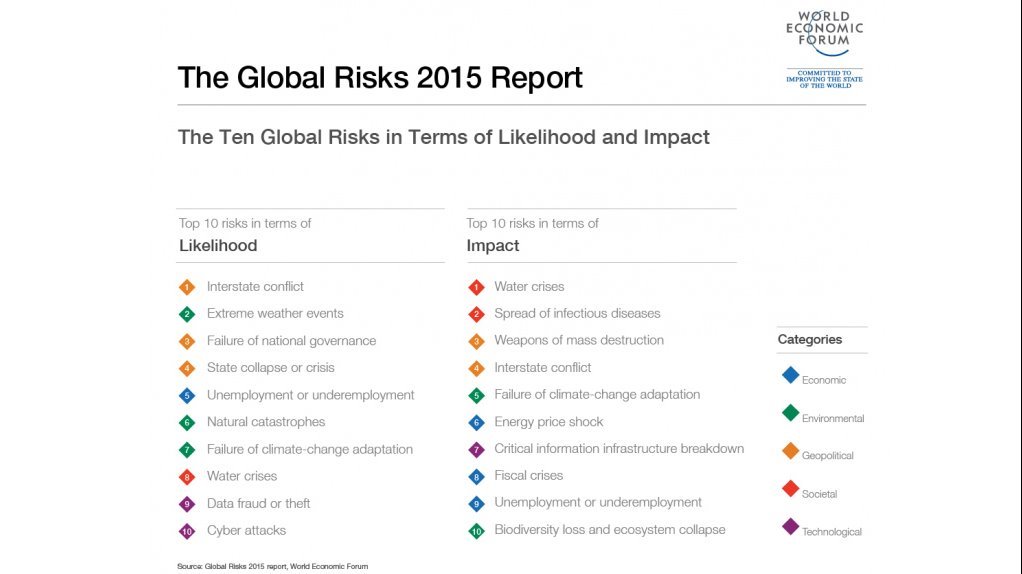 The Ebola outbreak in West Africa has exposed an inability to respond to major disease outbreaks. What lessons can we learn from this and who is responsible for taking action? Former UN Secretary General Kofi Annan joins outgoing Under-Secretary-General and Emergency Relief Coordinator Valerie Amos, World Food Programme Executive Director Ertharin Cousin and others to discuss this timely issue.

Confronting the Challenge of Catastrophic Outbreaks

Also on Ebola, this panel includes Margaret Chan, Director General of the World Health Organization, which was heavily criticised over its initial handling of the outbreak;  Alpha Condé, President of Guinea, one of the affected countries; Peter Piot, the doctor who co-discovered Ebola in the 1970s; and other leading figures from the medical and pharmaceutical sector.

What do borders really mean in our globalized world? As more and more people are on the move, fleeing instability, terrorism and economic hardship, borders have become a geo-political flashpoint. Antonio Guterres, head of the UN Refugee Agency, joins a high-level panel discussing the consequences of open borders.

Sustainable Development: A Vision for the Future

Billionaire philanthropists Bill and Melinda Gates discuss how to “catalyze action” on the UN’s new Sustainable Development Goals (SDGs), the targets being put in place this year to succeed the Millennium Development Goals (MDGs).

For those wanting more, we also recommend checking out the #BeyondDavos daily brief and sideline meetings.