Limited funding and personnel, as well as misconceptions and cultural beliefs, are some of the challenges hindering Uganda's goal of circumcising at least 4.2 million men by 2015 in a bid to lower the country's HIV/AIDS incidence.

Just 26 percent, about 1.4 million, of the men targeted under the Safe Male Circumcision (SMC) programme - launched in September 2010 - had been circumcised by the end of 2013, according to Uganda's AIDS Commission (UAC) mid-term review report of the National HIV/AIDS Strategic Plan (2011-2015).

The US President's Emergency Plan for AIDS Relief (PEPFAR) and the joint UN Programme on HIV/AIDS (UNAIDS) indicate that circumcising 4.2 million Ugandan men in 2011-2015 could help to halve the country's HIV incidence. Uganda's HIV prevalence rate has risen from 6.4 to 7.3 percent over the past five years.

The 4.2 million target represents 80 percent of the estimated number of uncircumcised men in Uganda. "I don't think we will achieve the 80 percent target by 2015. The service is limited to a few areas mainly because of the limited funding from donors and government. PEPFAR contributes the biggest portion of this fund out of the many donors supporting health related projects," Sylvia Nakasi, policy and advocacy officer, Uganda Network of AIDS Service Organizations (UNASO), told IRIN.

"Other factors affecting demand are the mixed messages on SMC, limited coordination of the private and public SMC service providers which affects timely reporting and quality assurance of the service provided, limited training of health workers to do SMC surgery, inadequate SMC supplies, lack of SMC champions and limited health workers."

According to the UAC report, about 14 districts (out of 112) had reported no SMC activities by March 2013.

"We have had challenges in building capacity and putting systems in our health facilities for the service," Joshua Musinguzi, the programme manager of the AIDS Control Programme at Uganda's Ministry of Health, told IRIN. "We are now focused to consolidate and scale up SMC to try to achieve our target. We have harmonized communication materials to create demand, uptake, fight behavioural disinhibition and dispel myths."

The UAC report noted that limited mass awareness on SMC may lead to risky sexual behaviour. “Disinhibition” implies the loss of inhibition on behaviour that had been restrained.

"The circumcision disinhibition might cause men to abandon previous risk reduction behaviours such as partner reduction or condom use. There are reports of local misperceptions that SMC is a magic bullet to prevent HIV, a belief that is likely to inhibit safe sex practices," it stated.

Community sensitization about circumcision in Uganda 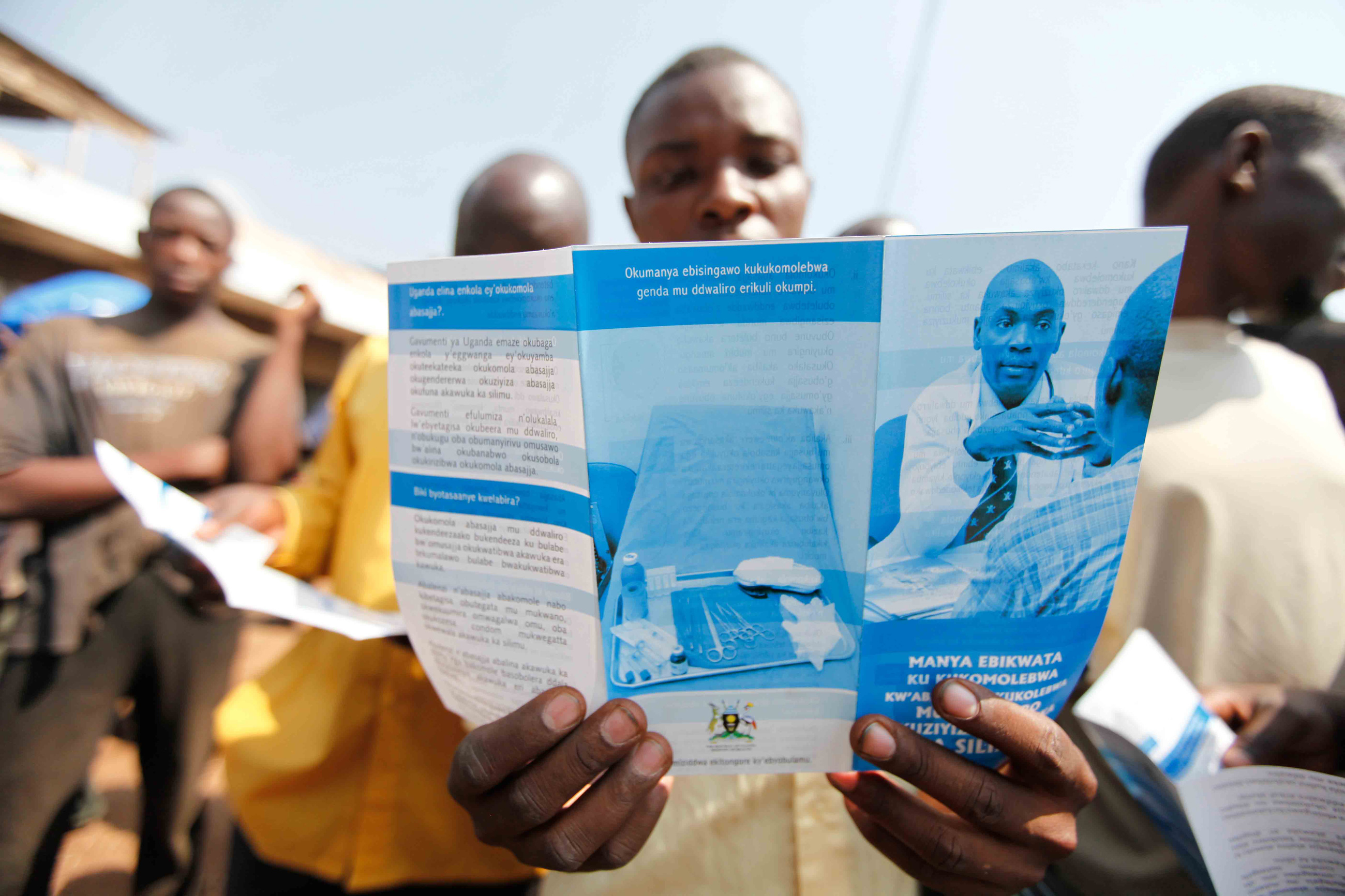 The report added that the preference for traditional circumcision among some ethnic groups, such as the Bamasaba and the Bakakonjo, is affecting government efforts to scale up SMC. SMC is medically carried out under hygienic conditions to prevent the spread of infectious diseases, which are risk factors in traditional circumcision.

A large randomized controlled trial in South Africa, Kenya and Uganda found that medical male circumcision can reduce a man's risk of contracting HIV through vaginal intercourse by almost 60 percent. Other studies have found that the effectiveness of male circumcision for HIV prevention is maintained for several years.

"There [is] reported stigma attached to SMC as those who go for it are labelled 'cowards'. As a rite of passage, the Bamasaba male circumcision is a yardstick for manliness and Masaba identity. This particular issue needs further investigation to determine the extent of cultural impact on SMC, including among other ethnic groups in the country, for instance the Bakakonjo in Kasese district," the report noted.

Myths abound. "There are many misconceptions and myths which surround this intervention. It's also [a] frightening procedure. Men think of the risks involved, the pain and how long it will take them to heal," added Sarah Kayagi, the chairperson of Uganda's HIV/AIDS parliamentary committee. "Some women don't want their husbands circumcised on grounds that they will become sexually weaker... Some think it's meant to convert people to Islam."

The lack of prioritization for SMC over the years has been a problem, too, added Asia Russel, the international policy adviser for the US NGO Health Gap. "Uganda wasted time while politicians discredited the intervention because it doesn't fit the received wisdom on prevention interventions, ABC [Abstinence, Be faithful and Correct and Consistent Condom use]. The country wasn't integrating biomedical interventions," said Russel. Uganda has continued to focus on the ABC HIV prevention strategy.