It is a Saturday in Cape Town. In many parts of South Africa’s second largest metropolitan area people mill about, inspecting baby cabbages and shitake mushrooms at one of a dozen or so relatively new farmers’ markets trading in organic or “natural” and - perhaps equally important to these consumers - local produce.

But whom else can this burgeoning market sustain? In a city with an official unemployment rate of 23.9 percent and an increasingly apparent food security problem, this market’s growth begs the question of how it might stimulate urban agriculture as a livelihood option for the city’s poor.

South Africa is largely considered food secure, with its national food insecurity prevalence having reduced by more than half from 1998 to 2008, according to a 2011 World Health Organization (WHO) report. But the proportion of people at risk of food insecurity remains practically unchanged, added the report.

Researchers suggested that this figure was driven in part by the high rate of migration to the city, primarily from rural areas to the city’s poorest localities. With over 60 percent of South Africa’s population already urbanized, poverty has decidedly shifted from the rural to the urban, and Cape Town’s 29.3 percent population growth from 2001-2011 is indicative of this trend. After years of viewing food security as a rural priority, South Africa’s urban planners and policymakers are acknowledging food production as an urban responsibility.

A role for urban agriculture

“So how do we feed cities?” asks Stanley Visser, the City of Cape Town’s head of Urban Agriculture (UA) from 2000-2013. “Urban agriculture can play a role there,” he states, going on to qualify that UA must be undertaken as part of a suite of diversified livelihood activities. “But first we’ve got to increase awareness around the benefits.”

Back at the Oranjezicht City Farm Market - one of the city’s most upscale and all-organic Saturday markets - tomatoes have sold out. Market manager Sheryl Ozinsky says that if more organic farms could supply them, the market could “guarantee” weekly sales. “We imagine this kind of demand will eventually create more organic farmers out there,” says Ozinsky. But she also acknowledges the difficulties for emerging farmers, organic or otherwise: “From a business perspective, a lot of the guys don’t really have a system.”

It is not only business systems that are lacking. In 2007 the City of Cape Town released an impressive urban agriculture policy that granted UA a formal status - meaning that qualifying individuals and groups (qualification is established by household earnings below a certain amount) could apply to the city for basic assistance in the form of seed, tools, training, and water subsidies.

Since 2009, the city, together with the Provincial Department of Agriculture (DOA), have collaborated to provide support to 1,425 household garden and 132 community garden projects, representing 13,725 individuals.

However, with the policy still awaiting final approval, its UA Unit, tasked with supporting the entire metropolitan region, still lacks an official budget and is staffed by one person (the bulk of resources have come from the DOA’s limited coffers).

Meanwhile, a handful of NGOs also provide support to poor emerging urban farmers. Abalimi Bezekhaya (an UA and environmental action association) is the oldest and most well-known.

A small farmer in her garden in Cape Town 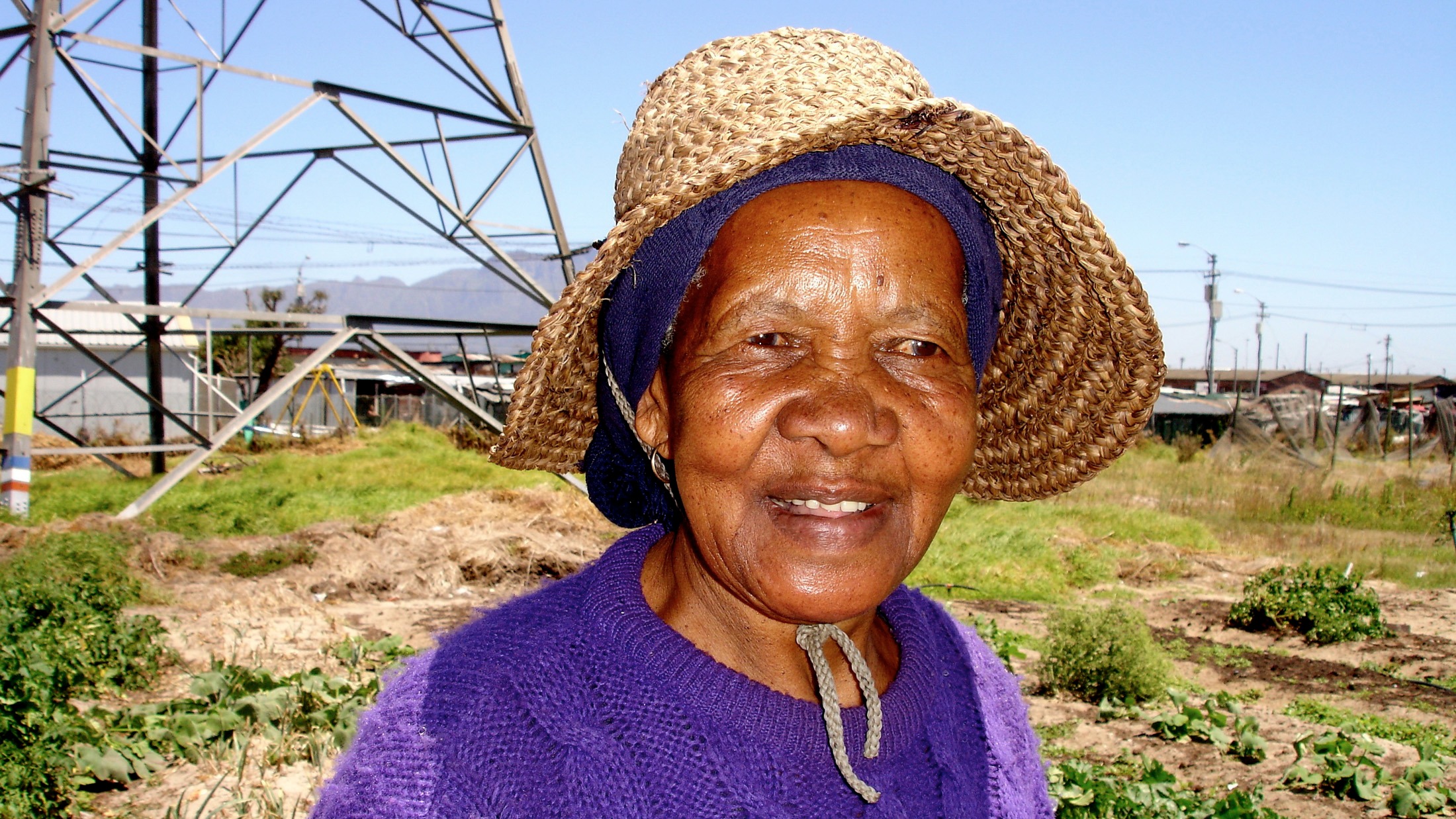 Since 2008, its Harvest of Hope (HOH) market programme has sold weekly organic produce boxes to a middle class market in Cape Town, providing urban farmers not only with food for their table, but also a small income. Although HOH continues to grow and remains the only market consistently supplied by emerging poor farmers, co-manager Rob Small acknowledges that it has yet to break even financially.

“We see our HOH market as a training facility to get farmers to that point,” says Small, of developing participating farmers’ production and efficiency levels for business competitiveness. He stresses that the capacity-building chain is a long-term process.

Marketing the produce regularly remains difficult. Abalimi farmer Lulama Jim, who began farming in 2010 after three years of unemployment, says that though farming puts food on the table, the earnings are “unreliable”. “You can’t say ‘I earn so much,’” Jim says.

“That market is reliant on the goodwill of people, not… economic forces,” notes Visser. “If Abalimi withdraws, it would collapse. So it’s a good thing but we need to increase other avenues for urban agriculture.”

To that end, the city is currently reviewing a revised draft of its UA policy, which includes a strategy on increasing awareness and acceptance of UA among the poor (particularly young people), and creating additional market opportunities for emerging UA practitioners. City officials like Visser are hopeful that the revised draft will be approved this year.

But before market opportunities can be utilized, uptake remains of paramount importance. “It’s problematic at the moment… because there’s not really a very good culture of gardening in the city,” Visser tells IRIN.

The Provincial DOA’s acting chief director of farmer support and development, Mogale Sebopetsa, notes that the poor mostly view food gardens as a stop-gap mechanism to help put food on the table when they lack paid work. “No one wants to wait 90 days for a cabbage to grow if they can get R100 [about US$9] a day from you,” he says.

Despite the fact the unemployment rate among the youth has increased (among youth aged 15 to 34 it increased from 32.7 percent to 36.1 percent between 2008 and 2014, according to official statistics), young people remain disinclined to farm. “Young people are not interested,” notes Abalimi’s 62-year-old Jim, who relies on UA both for her own table and for the small income it provides. “They want money in the hand,” she adds. By that logic, however, the existence of viable markets for emerging farmers could make UA a more attractive economic option - that is to say, a real job.

The city could assist emerging UA farmers to access a reliable township market through supporting the development of semi-formal market places, where producers could rent space at minimal cost.

Comparing the potential of township markets to that of the upscale market opportunities in the city centre, Visser observes that growing interest in organic and local produce could represent an opportunity one day. But for now, too many obstacles block the latter. From consistency of production quantity and quality, to familiarity with market demand (i.e., what to grow, how it must look, etc.), to issues like transportation and consumer trust, poor emerging farmers interested in profiting from Cape Town’s organic market zeitgeist (and its higher price points) will require intensive assistance from organizations like Abalimi Bezekhaya for some time to come.

The DOA runs a market access programme, but it is geared to smallholder commercial farmers, not emerging UA farmers. According to Sebopetsa, DOA agricultural extension officers provide UA farmers with marketing advice in an overall training and capacity building programme, but the focus remains on subsistence. With only 83 extension officers for the entire province, Sebopetsa questions how much energy can be devoted to the market question.