A state of quasi-war in Egypt’s North Sinai Governorate has brought economic life to a standstill, residents say.

Many people in the impoverished Sinai Peninsula have been out of work since the army began a crackdown on armed groups in the area, following the July ouster of President Mohamed Morsi of the Muslim Brotherhood movement.

Both militants and local people depended on the smuggling of goods to and from the neighbouring Palestinian enclave of Gaza as their main source of income, but security forces have in recent months targeted the area’s smuggling tunnels, which numbered an estimated 1,200 at their peak.

“There is no work,” said an inhabitant of the border town of Rafah, who refused to give his name for fear of reprisal. “It depended on smuggling, and now it has stopped.”

Ehud Yaari, a fellow at the Washington Institute for Near East Policy, estimates the smuggling trade used to earn the Bedouin in Sinai some US$500 million per year. It also facilitated the transfer of weapons and explosives to and from the Gaza Strip.

Since army operations began, prices of fuel, cooking gas and public transport have risen on the black market, and some food items are in short supply.

An afternoon curfew and extensive road closures have slowed the arrival of goods from the capital, Cairo, more than 300km away, and many products do not reach the villages near the border as regularly. In Rafah, shops next to military operation areas are temporarily closed, and those next to the police station are permanently closed.

For a time, some residents could not find products as basic as yogurt. The price of 1kg of potatoes had risen from 2.5 Egyptian pounds (US$0.36) in June to 10 EGP by mid-October, though it has since fallen back to 3 EGP.

A refill of cooking gas used to cost 8 EGP before military operations began this summer. By October, it had risen to 25. A gallon of petrol used to cost less than 1 pound, now it costs 3.

Fuel runs out quickly at stations; residents say it is bought in large quantities and smuggled to Gaza in one of the few smuggling operations that continue.

The Egyptian army says it has taken the impact on civilian life into consideration in its operations.

“We wish to hinder civilian life as little as possible,” Egyptian army spokesperson Colonel Ahmed Ali told IRIN. “Some people have asked us to prevent all movement when our vehicles are moving, or to declare the operations area between [the regional capital] al-Arish and Rafah a war zone, but we don’t want to make people’s lives impossible.”

An afternoon curfew (4pm in some areas; 6pm in others) has limited activity in North Sinai. The roads surrounding the dozen or so security and state buildings in al-Arish are blocked with sand dunes and a heavy military presence.

When the military operations start, early in the morning, residents say, phone and internet networks are cut until curfew.

School was delayed for a little more than a month for security reasons; for a period, teachers in the area, many of whom live in al-Arish, said they were afraid of the trip to the schools in Rafah, al-Sheikh Zuwaid town and villages in the area.

Freedom of movement has also been curtailed. In Rafah, people do move around the city, but very carefully, and they rarely leave their homes during military operations. Because of the curfew, daily activities start wrapping up around 3pm.

“ They say they want terrorists. Why don’t they keep to terrorists then? ”

When Amr’s* cousin broke his arm in early October, the ambulance refused to take him from the village of al-Mehdiya to the hospital in al-Arish because of the curfew. It took four hours to negotiate with intelligence services in Rafah for permission.

People in the area still live in fear of dragnet operations like the one that followed the 2004 bombings of tourist resorts in South Sinai, which Egyptian human rights groups say led to the arbitrary arrests of 3,000 people.

According to one resident of Rafah, the same pattern is re-emerging now.

“There are arbitrary arrests and shooting from government snipers, especially around the church or the water tower.”

Sinai residents have changed their license plates to numbers from mainland Egypt so as not to be harassed at checkpoints, and Palestinians who used to go on holiday in South Sinai have held back for fear of being accused of being “terrorists”.

But the reduction in smuggling has most affected economic life here.

“We are destroying tunnels in Rafah and North Sinai because they contribute to illegal arms trade,” General Samih Beshadi, the government’s head of security in North Sinai, told IRIN.

According to a Gaza economics professor who spoke to the International Crisis Group (ICG), some US$500-700 million in goods used to pass through the tunnels every year, keeping the economy of the blockaded Gaza Strip afloat. The smuggling trade also sustained the militant Hamas government in Gaza, which since early 2012 has charged duties of at least 14.5 percent on goods brought into Gaza through the tunnels, ICG said.

Smugglers are accused of supporting armed groups in Sinai and collaborating with Hamas, an offshoot of the Muslim Brotherhood. Egyptian and Israeli officials say there are strong ties between militant groups in Gaza, including Hamas, and those in Sinai; and Egypt’s new military leaders blame Hamas for instability in Sinai.

Residents say the army is targeting upscale homes under the assumption that their owners’ wealth was acquired by smuggling and trafficking weapons and other goods to and from Gaza. Trafficking African migrants – and in some cases, torturing them for ransom – is also part of the local economy.

Experts say there has been a steep and conspicuous rise in luxury houses in otherwise underdeveloped North Sinai since the smuggling trade became the main source of revenue.

An opulent-looking house in al-Mehdiya village, in North Sinai, less than five kilometers from the border with Gaza. It belongs to Youssef Eid El Menai, said to be a human trafficker, who local residents say has fled the area. The Egyptian army first set 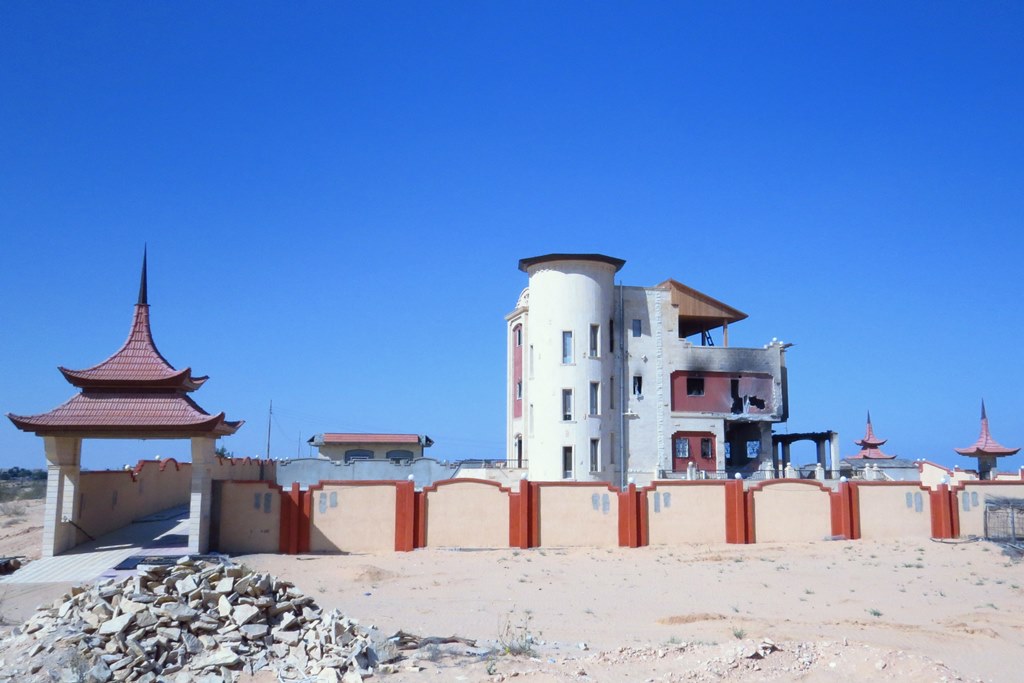 “They attack all the nice houses,” said Mohamed, the head of an affluent Bedouin family in al-Mehdiya Village, within 5km of the border with Gaza. “They say they want terrorists. Why don’t they keep to terrorists then?”

The family’s home, which housed 15 people, was “torched” by the armed forces, along with several cars, a tractor and a generator. The military also fired at the house with tanks, Mohamed said. When IRIN saw the home, the top floors were completely smashed.

“They even looted the house and stole my jewellery,” complained a woman from his family. She said that while hiding outside, she overheard one of the soldiers say, “If this is a farmer’s house, then let me be a farmer’s employee.”

“It’s our army. I don’t want anything to happen to them,” she said, referring to militant attacks against security forces. “But why did they do this to us?”

Mohamed admits the family used one of the trucks burned by the military to transport construction material to the Gaza Strip. “But we’re no terrorists or extremists,” he said.

The home of an affluent Bedouin family in al-Mehdiya village, North Sinai. According to the family, the Egyptian army torched the home, several vehicles, a tractor and a generator on the basis that the family was involved in terrorist or smuggling operati 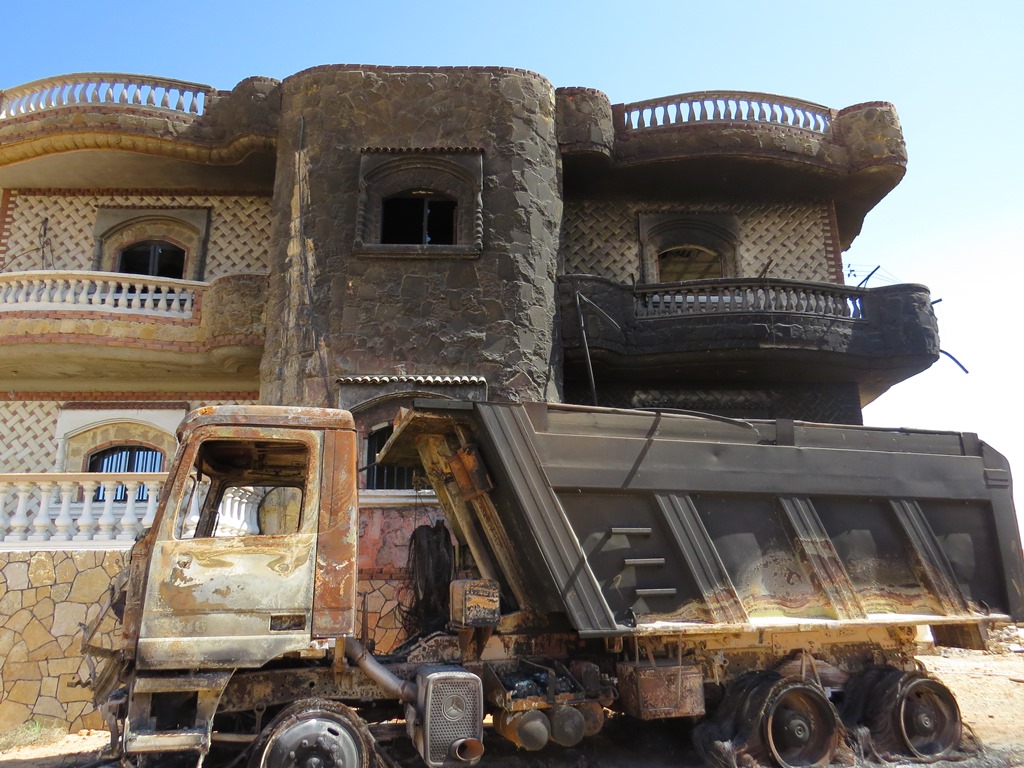 Burned trucks lined the border roads in October. IRIN saw people burying trucks in the sand to avoid the same fate for their own vehicles - those were likely trucks used to carry construction materials to Gaza through the tunnels.

Many of the underground smuggling tunnels running from Egypt to Gaza begin under people’s homes.

In Rafah, residents say the army is blowing up houses believed to be connected to tunnels on an almost daily basis. IRIN spoke to two families who said their homes had been wrongly accused of having tunnels.

“The army says in the media we all have tunnels, and then they come and destroy our houses,” said Osama*, an inhabitant of Rafah. At the end of August, the army used TNT to blow up the two homes he and his relatives were living in; he now lives with his family in an unfinished house in al-Mehdiya.

“I can’t come back to my house or re-build it. They don’t give you a chance to take anything out of the house before they wipe it out,” he said, adding that the army also destroyed his 10 feddans (4.2 hectares) of olive trees.

Osama denies having a tunnel in his home, but Samir Ghattass, director of the Cairo-based Middle East Forum for Strategic Studies, insists all border homes on the Egyptian side of Rafah open onto tunnels and are involved in the smuggling of people and arms. He says the army specifically warned residents that all homes with tunnels would be destroyed.

Also in the series Sinai: Destined to suffer?