In Mathare, a sprawling slum in Kenya’s capital, Nairobi, children in tattered  clothes play with raw waste  flowing from a burst sewage pipe. In the alley, crowded with tin-and-wood shanties, a food kiosk filled with people feasting on smoked fish stands on the burst pipe. Close by, a woman fries chopped potatoes on an open fire.

Uninsulated electricity cables hang precariously in people’s single-storey houses. The residents know the dangers, but they have little choice. They are not part of the national power grid and might never have a legal connection.  A water-vending kiosk stand beside two dirty, poorly constructed pit latrines.

“The crisis of poor infrastructure, overcrowding, few resources and poor sanitation facilities is exacerbated further by a high disease and morbidity burden, characterized by high levels of malnutrition among children and the aged and high rate of communicable diseases like typhoid, malaria, dysentery and tuberculosis, with most families being unable to afford medical care. Health facilities are also limited, unequipped and understaffed,” Bessie Nikhozi, assistant programme manager of urban livelihoods and social protection at Concern Worldwide, told IRIN.

Paul Odero, a 27-year-old father of two and a resident of Mathare, told IRIN, “Here we share everything because nobody can afford anything of his own. We share latrines, and these people selling food near the latrine have no space to put their kiosks. It must be near there because that is where you can find space.”

He added, “We have no place to dispose our garbage, and we just throw it anywhere. At times, you find children playing with used sanitary pads because the woman and girls who use it have nowhere to take it to. The children get diarrhoea and many die.”

In 2012, in a span of just six months, at least three children died from electrocution while playing with illegally connected power lines. In the same year, an illegal electricity connection caused a fire that destroyed some 300 houses, leaving thousands without shelter.

Mary Muiruri, a community health worker, told IRIN that the open dumpsites and the fumes emanating from them have meant respiratory infections are rampant.

“The running noses among small children you see do not mean their mothers don’t care. They do, but the health risks associated with poor waste disposal means their children are constantly suffering from respiratory infections. It is that bad,” she said.

“It looks simple but many women in the slums cannot go to work because they are constantly looking after sick children. Such people can’t come out of poverty because how do they get income? The unhygienic conditions make them very sick often,” Muiruri noted to IRIN.

In 2010, the global health charity, Medicines Sans Frontiers (MSF) reported  that pneumonia and respiratory tract infections accounted for 40 percent of all consultations in its heath facilities in Kibera, a Nairobi slum.

An estimated 53 percent of those who scavenge at a dumpsite in Dandora, another slum, have respiratory tract infections, coughs and asthma, according to Concern Worldwide.

The few toilets available in Mathare are privatized, and residents pay a user fee of five shillings (US$0.06). Many cannot afford this daily fee.

"Extremely poor people living in urban slums like Mathare are forced, on a daily basis, to significantly compromise their long-term well-being to meet their short-term survival needs. This includes pulling their children from school, engagement in transactional sex, etc.,” Ann Marie Swai, the food, income and markets coordinator at Concern Worldwide, told IRIN. 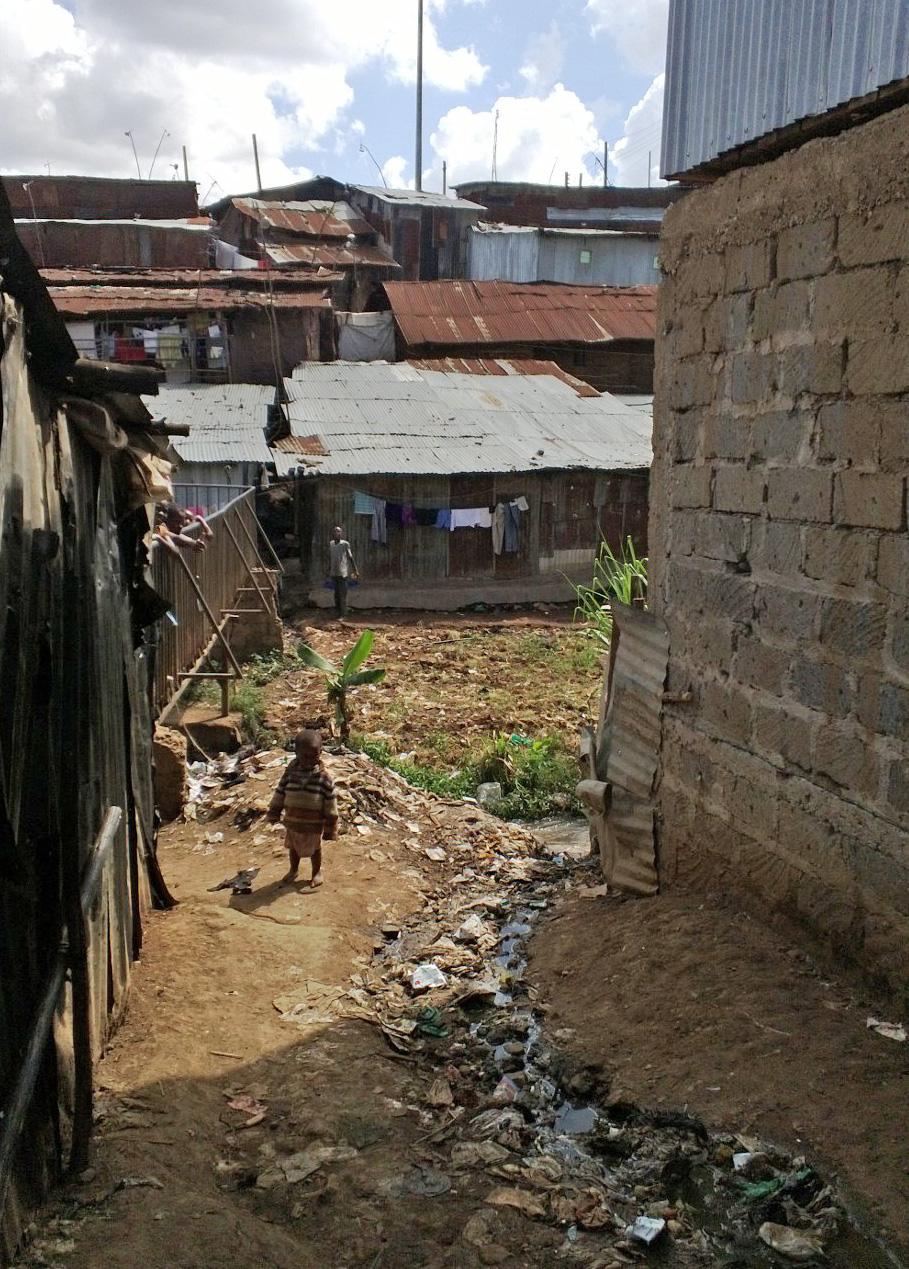 Around a billion people living in the world’s cities today reside in deprived areas like Mathare, with few or no basic amenities. In Afghanistan, Chad, Ethiopia and Nepal, more than 90 percent of urban populations live in such deprived areas, according to the UN-Habitat.

“It is a concern that people live in overcrowded areas without any adequate policing or electricity, which raises a lot of other issues - and particularly the protection of women and children. They only have minimum services, and the humanitarian challenges they face can be overwhelming,” Kyung-wha Kang, the deputy emergency relief coordinator for the UN Office for the Coordination of Humanitarian Affairs, told IRIN.

According to the UN World Health Organization, children in Nairobi slums are two and half times more likely to die before their fifth birthday than in other areas of the city.

Moses Owino, the district medical officer of health in Mathare, told IRIN that nutrition for children and access to healthcare is a challenge in urban slums.

“There are many young mothers who can hardly afford to feed their children, and this means the issue of malnutrition for children under five years is very high. The health facility can hardly cope with the demand here. HIV prevalence is higher than the national average. Urban slums are faced with a health crisis,” Owino told IRIN.

According to Concern Worldwide,“The skyrocketing costs of food [have] pushed an already desperate people into extreme poverty, rendering them incapable of feeding their families or paying for basic services such as healthcare, rent and school fees.”

The organization adds: “With no land or means of growing their own food, slum residents are entirely reliant on markets [for food]. The price of maize, a basic staple food for the poorest, has increased by 133 percent over the past year, while incomes have shrunk by 21 percent, forcing families to resort to desperate measures to survive.”

In Korogocho, another of Nairobi’s slums, Beatrice Awuor has yet to obtain routine immunizations for her six-month-old baby. She is sick and cannot walk to the nearest clinic, almost 10km away. Frequent gang attacks and muggings have meant many of the community health workers who carry out door-to-door immunization have no access here.

“They [immunizers] cannot come here because these boys [criminals] will attack them. We live at their mercy, and they snatch anything from visitors who come here. They want you to give them protection money, and if you don’t, they just attack,” Awuor said.

Lack of jobs for many of the young inhabitants in the slums has meant they often turn to crime to make ends meet.

According to the Institute for Development Studies (IDS): “The problems of under-policing, unemployment or lack of services in slums ultimately stem from the powerlessness of slum dwellers who find it hard to connect with state authorities.”

And hidden in this violence lies a crisis, says Aggrey Nyange, an urban planning expert at the University of Nairobi: displacement due to violent crime.

“Organized gangs and criminal elements within slums have rendered many people in slums homeless. There are people who are marked by these gangs who can hardly access their homes. Maybe they refused to pay protection fees. It is a sad situation that needs to be dealt with,” said Nyange.

He added: “People talk about violence and crime but rarely mention the effect it has on [victims].”

As rural populations migrate to urban areas, looking for new economic and job opportunities, cities will continue to grow, and governments will need to increase efforts to ensure that urban infrastructure like housing is able to cope with the growth.

OCHA’s Kang noted to IRIN that “the settlements into these urban slums are often spontaneous,” and that governments in developing countries like Kenya will need to have both policies and the political will “to able to track these populations and provide the services to them.”

She added that standards set by the government, like the requirement that one must acquire five acres of land to open a government-recognized educational institution, are “unrealistic and these must be reviewed to enable as many children as possible in slums to have access to education.”

There is need for more initiatives to build the resilience of slum dwellers.

“They don’t sit back and wait. Many of them struggle to make ends meet, and initiatives such as access to credit and community dialogues are critical in ensuring that they are able to cope,” Concern’s Swai said.

“By working to build their resilience through enabling them to access better livelihood opportunities, health and nutrition, and education social services, we are supporting them to improve their longer-term welfare.”

Organizations like Concern Worldwide supports the extremely poor through increased access to financial services and capital, advocating for adequate social protection policies and services, and community engagement to improve the operating environment for small businesses in the informal settlements.

To date, the organization has given over 14,000 people in Kenya's urban slums cash transfers through mobile phone technology, and its nutrition efforts currently target a projected 225,000 children and pregnant and lactating mothers and a population base of 1.2 million in the urban slums.