This article is part of our in-depth coverage. Read more like this...
ZA'ATARI

"This was a bad week," says Kilian Kleinschmidt, as he begins a weekly camp management meeting at the world's largest camp for Syrian refugees.

No week is easy at Za'atari camp, which - with a population of around 120,000 - is now Jordan's fifth largest population centre. But this one involved a riot during a distribution that left aid workers in hospital, the theft of latrines, a stabbing, beatings, the complete destruction of a water tank, and an attempt to smuggle people out of the camp (they are not allowed to leave unless “bailed out”). When challenged by police, the smugglers and some supporters turned violent, leaving two Jordanian police officers injured.

While these actions are by no means typical of the camp’s population as a whole, small groups of "troublemakers" have created significant challenges.

"This is the most complicated, complex location in the world when it comes to refugee business," Kleinschmidt tells a team of aid workers one afternoon in June, as they crowd together in a “pre-fab”-turned-meeting-room.

Outside the relative refuge of the prefabricated trailer, a harsh sun scorches the dusty, windy desert landscape.

Za’atari camp was built in a matter of days as refugees started streaming across the Syrian-Jordanian border last summer. Amid the chaos, aid workers had little time to take care of themselves. Until recently, they had access to just one set of filthy squat toilets covered in faeces with a putrid smell, flies abuzz, and no running water.

Over the last three months, as conditions in the camp have improved, so too have conditions for staff - including a new cafeteria that sells hamburgers and kebabs.

But the combination of high temperatures, long hours, and stress in the camp has resulted in "tremendous burn-out" and a high turnover rate among some international staff. Day staff leave their homes in the capital Amman at 7.30am and sometimes do not return until 8pm, commuting some three hours a day.

Another set of staff works through the night. After the sun sets, they trickle into the camp, sipping on tea in thin plastic cups as they await the arrival of new refugees coming straight from the border. Under the moonlight, they register families, vaccinate babies, distribute blankets and listen to harrowing stories in the hundreds, which "sometimes make me want to quit”, due to their grimness, one aid worker said. They return to Amman just before the sun rises. 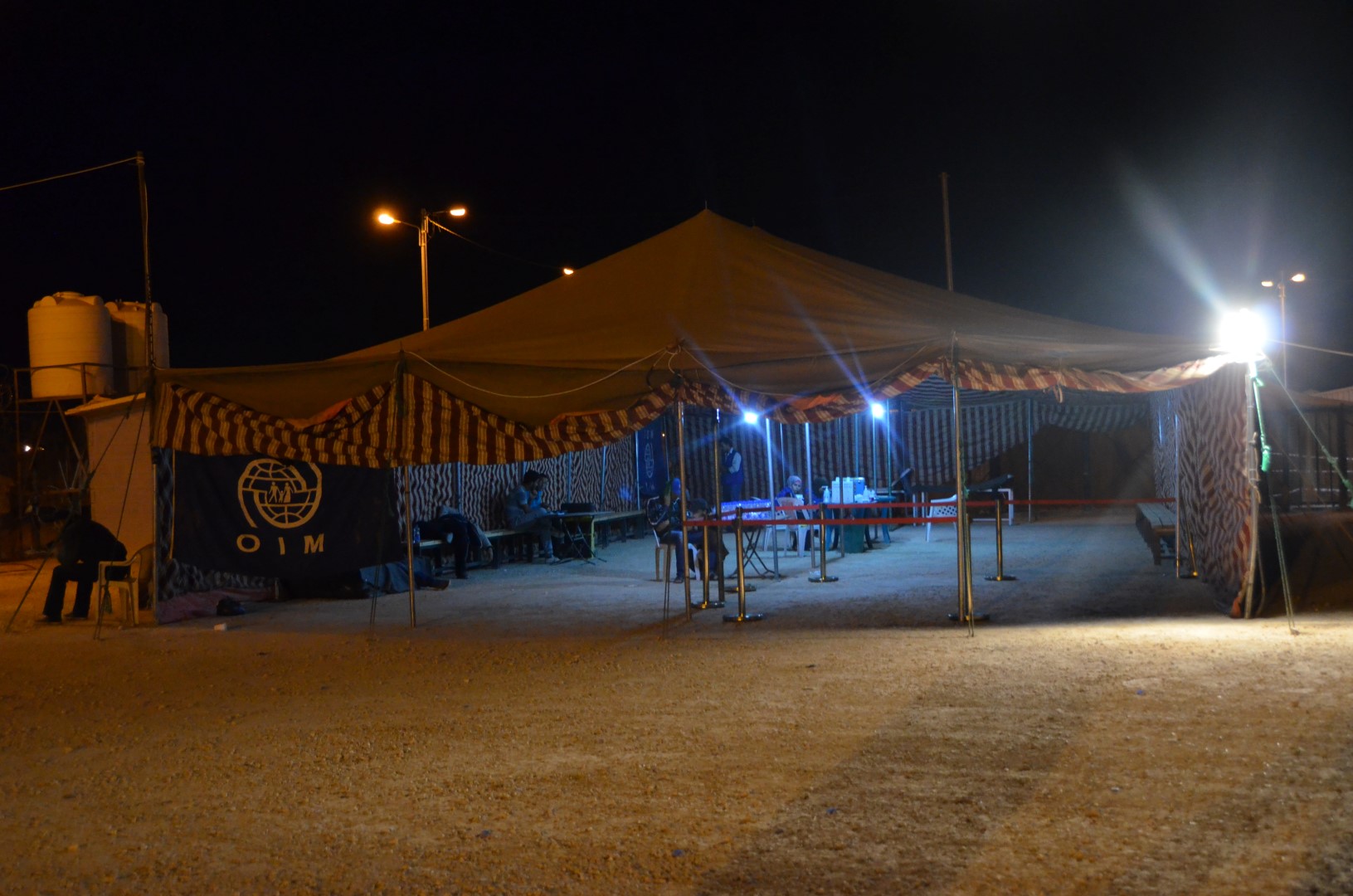 "It's a stress not only for the aid worker, but for their whole family," said one aid worker with young children.

In this particular week's incident, a crowd of 1,000 refugees gathered during the distribution of items, some of them climbing onto the roof of the waiting area. Within minutes, the aid workers below came under a "rain of stones". Police responded faster than usual, firing tear gas, but the vulnerability of aid workers was once again exposed.

"It was a real wake-up call, again, [on] how fast this goes, how many people out there can very fast get very, very violent," Kleinschmidt said.

The UN Refugee Agency (UNHCR) has started introducing better security measures, including enhanced fences and protocols for entry and exit of the refugee registration area and the “base camp” where aid agencies have set up their caravan offices.

Together with the government, UNHCR is trying to bring law and order to Za’atari by dividing the camp into 12 neighbourhoods or districts, each to be run by a decentralized administration. It also hopes to decongest the crowded western section of the camp; strengthen control over the perimeter of the camp; introduce a biometric identification system linking each refugee to a physical address in the camp; and improve policing, including night patrols.

"In Za'atari, every day there is a problem. Every day. So what you do is damage control. And it's a full time job."

But the best mitigator of violence, Kleinschmidt says, is improved dialogue with refugees. Many of the camp’s riots are sparked by false information about what aid agencies are offering and could thus be avoided.

According to aid workers, part of the problem was a failure to involve refugees in project development from the start. Overwhelmed, overstretched and underfunded in its early stages, the aid operation focused on providing for the refugees’ immediate needs.

"We had not given the necessary priority to community mobilization," said deputy camp manager Iris Blom. "It's something we are now improving."

But power relations in the camp can be hard to understand. While refugees say they have elected representatives from their communities, aid workers say there are several self-proclaimed "street leaders" on every street, who do not necessarily pass on information to the rest of the community.

"Refugees are not exactly one indivisible unified entity, but also have their differences, as is the case in any community," Blom said.

One point of particular friction has been the distribution of “caravans” (pre-fabricated trailers donated by Gulf states), which are more private and sturdy than tents and less exposed to heat, rain and dust. So far, almost half the camp’s population have received caravans and the distribution process is continuing.

One refugee, who has been waiting for a caravan for his family for two months, told IRIN he has seen newer arrivals to the camp get one before him. "That's why people get frustrated. If there were organized turns, no one would get upset.”

But aid workers say much of the inequity comes from the buying and selling of caravans among refugees. While some families have none; others have two or three. (UNHCR hopes to stamp out these “abuses” as governance and security are improved).

The fluidity of movement in the camp introduces another set of challenges. Where you may find someone one day, he may be gone the next, as families pick up their tents and caravans and park them somewhere else. Aid workers have to rely on satellite imagery for a full picture of the situation.

A refugee camp is something like a Rubik's cube, says Andrew Harper, UNHCR's representative in Jordan. There is a well-organized plan, with everything set in place. "But when people start fiddling around with it, it's very difficult to get back together... There is a limit to what we've got control over."

Kleinschmidt hopes that by further involving community leaders in the process, they will be more willing to take responsibility for some of the problems in the camp. UNHCR says improved dialogue has already reduced the unrest and riots substantially.

But the challenges in Za’atari camp are just one part of the complex aid operation in Jordan. Three-quarters of Syrian refugees in Jordan live outside the camp. In the capital Amman, aid workers have a whole set of other stresses.

A satellite image of Za'atari camp for Syrian refugees, taken in February 2013. It has become Jordan's fifth largest city - the size of about 600 football fields. Its layout is constantly changing as refugees pick up their tents and move to be closer to f 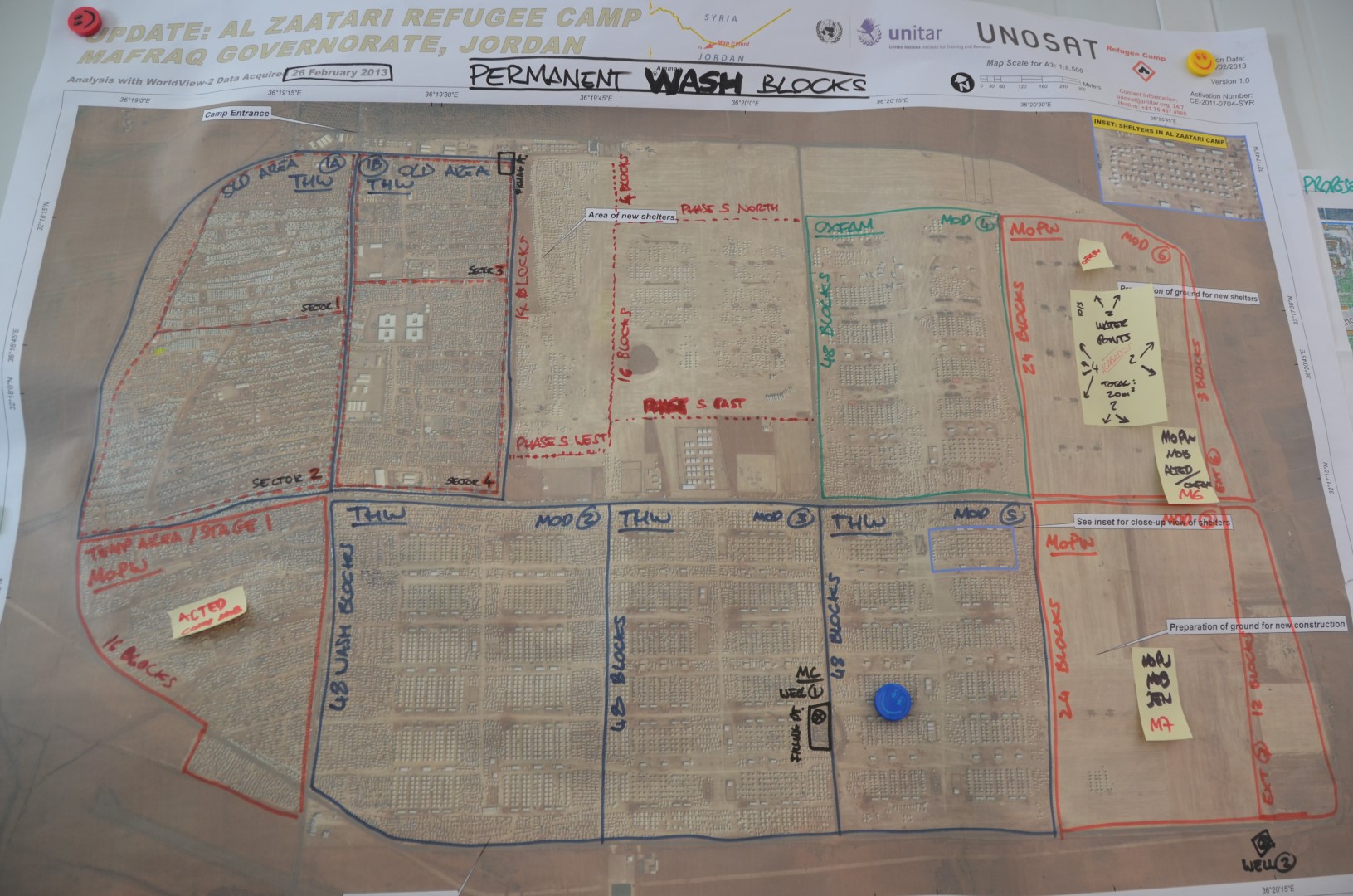 From the back of the bustling four-storey UNHCR headquarters, Harper manages part of what is now the largest refugee crisis in Middle Eastern history. During the day, he runs from meeting to meeting, putting out fires; and at night, the father of three toddlers watches the news and tracks social media, for everything from the latest shelling to escape routes opening up.

"You're always watching what's going on," he says. "What happens in southern Syria will have an impact on the numbers that come across that night. So I need to know what battles are taking place."

There are other calculations. What happens if the situation in other host countries, like Lebanon, deteriorates? Where will refugees go instead?

"We've got to look at the whole scenario and then start looking at how many people we expect," Harper says. "If you want to look at the potential, then it's just truly frightening."

He flips through graphs showing the exponential increase in the number of refugees entering Jordan. In May 2012, there were 20,000 Syrians registered with UNHCR. By February 2013, there were more than 500,000. Projections made using current trends produce "ridiculous" numbers.

"It's lucky that I didn't know then what I know now," he jokes. "I would have taken leave!"

Jordanian government officials working on the Syria file have similar stories to tell: they can barely take a day off to see their children and their phones never stop ringing.

A journalist calls one government official to inquire about a purported riot in Za'atari camp.

"Brother, listen to me," the official says, unfazed by the question. "The protests have become routine, almost."

As one aid worker put it: "In Za'atari, every day there is a problem. Every day. So what you do is damage control. And it's a full time job."