In temperatures in the high forties around 1,000 Ethiopian migrants, sweating profusely, turn their backs to Saudi Arabia and start the walk south - away from the Yemeni border town of Haradh and their dreams of a new life.

On the road they silently pass others heading north, still hopeful of crossing the border.

Haradh is at the crossroads of these dreams - a potential gateway to a new life in Saudi Arabia, but getting there is becoming increasingly difficult.

To get here, the migrants have endured considerable hardship; often taking on debt to fund the journey, walking for weeks to get to the East African coast and then crossing the shark-infested Red Sea.

Thousands get picked up by smugglers in Yemen who kidnap and torture them to extract ransom money.

Then, they reach what for many is the end of the road and their hopes: a dusty poverty-stricken town, 10km from an increasingly impenetrable Saudi Arabia.

"There’s a general feeling of depression. They come with dreams. Some just keep trying - they owe so much money", Fatwa Abdok, psychiatrist, MSF

“There’s a general feeling of depression. They come with dreams. Some just keep trying - they owe so much money,” Fatima Abdo, a psychiatrist working with Médecins Sans Frontières in Haradh, told IRIN.

She describes hearing testimonies of “torture you can never imagine” from those held captive by smugglers.

“Some of them are completely destroyed. Some get consumed just coping with it. It all depends on the strength of the person. Some recover when they have food and a place to sleep. Ethiopians are strong people, but some go crazy,” she said.

Ethiopians make up the majority of arrivals - up from 64 percent in 2010 to 78 percent last year.

“The Saudis have cracked down. The border’s not closed but it’s more difficult to get in,” said one aid worker who asked not to be named.

Earlier this year, Saudi Arabia announced plans to resume construction of a 3m-high fence along its 1,800km border with Yemen.

Work on the controversial project initially started in 2003, but was suspended a year later. In 2008 a fence was put up along the coastal area around Haradh where much of the cross-border smuggling of people, drugs and weapons is concentrated.

In addition to the fence, Saudi Arabia has also cleared the border areas of settlements and uses floodlights and thermal detection cameras to try to stop the often heavily-armed smugglers.

These restrictions have led to a build-up of pressure in Haradh and the surrounding Hajjah Governorate, where poverty is widespread.

The governorate, which depends on economic ties with Saudi Arabia, already supports more than a 100,000 internally displaced persons (IDPs) who fled neighbouring Sa’dah Governorate after the 2004 Houthi uprising and subsequent conflicts.

Some of the IDP families at the al-Mazraq IDP camps a short drive from Haradh rely on breadwinners in Saudi Arabia, but residents complain that the border restrictions have pushed them into poverty.

“We used to work in construction in Saudi, but now because of the fence, lots of Yemenis have been jailed there. Now there are video cameras and machine guns stopping us getting across,” said one camp resident, Saleh Hassan.

Recent changes to Saudi labour laws have also threatened tens of thousands of Yemenis with expulsion, which would further add to the country’s economic difficulties two years after the turmoil of the Arab Spring.

Press reports quoted government officials this week saying 53,000 Yemenis had been deported from Saudi Arabia since the beginning of June, and tens of thousands more are expected in the coming days. 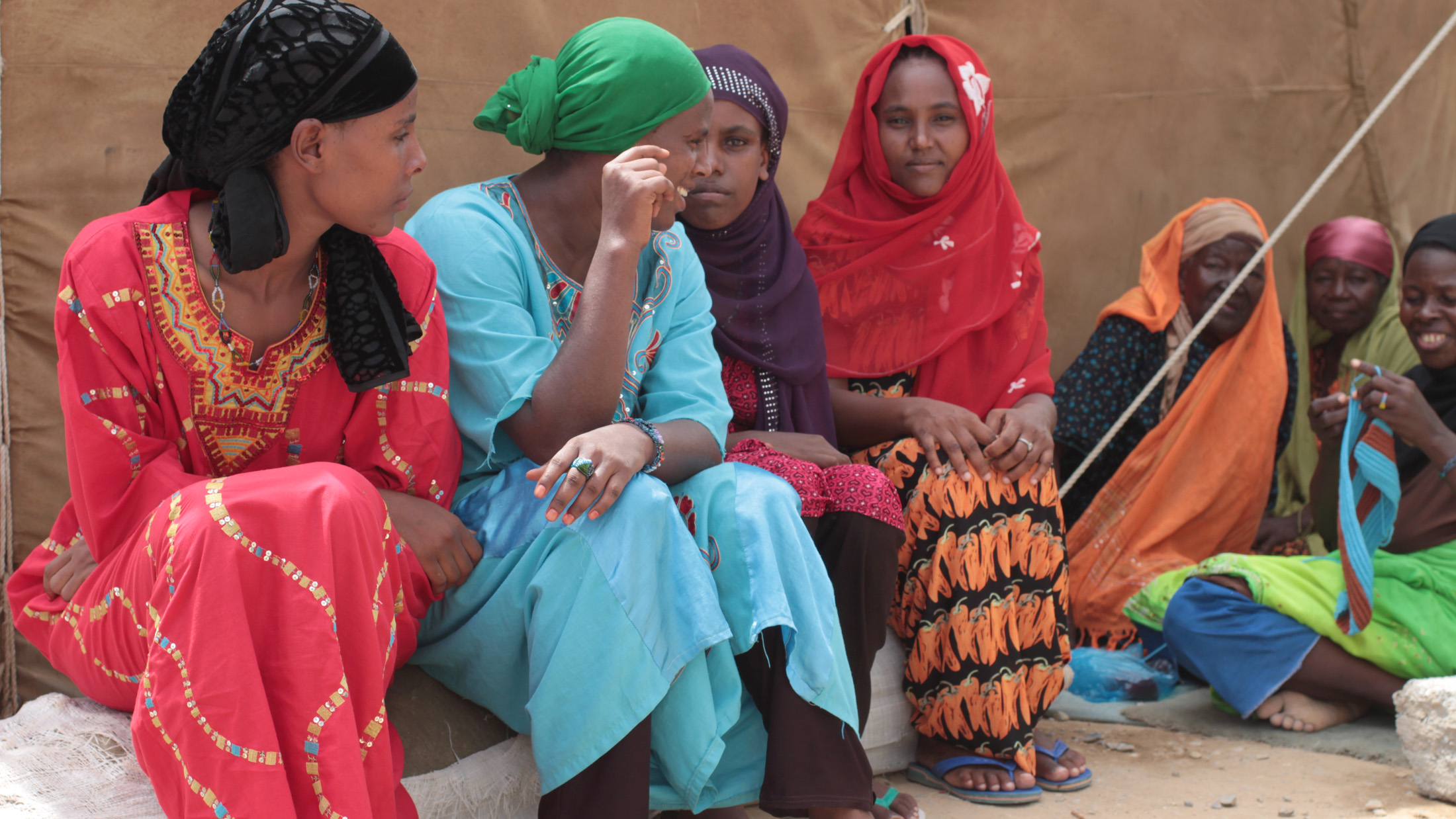 Community leaders in Haradh say the new restrictions have led to a significant decrease in economic activity, making it more and more difficult for the town to support the tens of thousands of African migrants.

“We are afraid for the migrants because of the torture they often suffer, and also of them. Now with the fence up, they are creating more problems,” the head of the local council in Haradh, Sheik Hamoud Haidar, told IRIN.

“We are afraid of them because they are hungry. A hungry man is an angry man.”

Around 2,000 migrants have also been freed around Haradh in recent months following army raids on smuggling yards to free them from captivity. Deportations from Saudi Arabia also push African migrants back into Haradh - an estimated 40 percent of the 3,000 migrants using the International Organization for Migration (IOM) Migrant Response Centre in Haradh have come from Saudi Arabia.

“It is clear that it is the right of any country to close its borders to clandestine operations. Having said that, we are today faced with 25,000 people who are trapped in the border,” said Ismail Ould Cheikh Ahmed, the humanitarian coordinator in Yemen.

“Every time there is a military operation, we discover another 500 or 700 who have been in this or that camp controlled by human traffickers and abusers. So the number is only increasing - 25,000 is something that Yemen today cannot absorb.”

The increase in demand for migrant services in Haradh this year came at just the wrong time for the supply of humanitarian relief services, which face cutbacks due to funding shortfalls.

IOM suspended large-scale return flights in September 2012, and the World Food Programme’s provision of hot meals to around 3,000 migrants at the IOM centre was scaled back temporarily in January by 90 percent, though these have now been restored.

The UN Children’s Fund (UNICEF) has been working with NGO InterSOS and the Yemeni government in providing temporary support to a Child Protection Centre in Haradh, where IRIN met 50 Ethiopian children getting ready to fly back home.

“We were beaten, tortured and scarred by armed gunmen when we arrived in Yemen. We escaped and made it into Saudi Arabia, but we were caught,” said Saed Oumar Youssouf, 16.

“After a night in jail, and 12 nights elsewhere, we were shipped back to Yemen.”

All the children said they were looking forward to returning to Ethiopia. Preliminary registration at the IOM centre in Haradh for return flights to Ethiopia restarted at the end of May, and since early June 633 migrants have voluntarily returned, with places given as a priority to the most vulnerable.

IOM’s operations in Haradh are focused on the Migrant Response Centre set up in October 2010. It has voluntarily returned nearly 10,000 migrants since then, and treated 52,000 at the health centre, where they deal with 100-150 cases per day depending on the season.

“The numbers are just growing. Many of the cases we see are infectious diseases and diarrhoea; their immunity is very weak due to malnutrition,” said IOM’s doctor at the centre, Fadl Mansour Ali.

He said a large number of patients had malaria and other parasite infections, and also depression and anxiety.

Not everyone recovers. The morgue in Haradh has room for 17 bodies, but has been keeping around 50, almost all unclaimed bodies of dead migrants. The electricity supply is unreliable and the single generator repeatedly breaks down creating a terrible smell.

Korom Asmro Noqassa from the Tigray region in northern Ethiopia shares a bed with another patient inside the small cabin that forms the main part of the IOM clinic.

After four months in Haradh, he says he is ready to go home. “I wanted to go back as soon as I realized it was so hard to get across; back home maybe I can find a job and support my family. Most here want to go back home now,” he said.

“I’m going to tell people my own story. Smugglers cost money and aren’t reliable. But it’s very hard for people to say that they have failed.”

There is broad recognition that tackling the migration at source can really help reduce the suffering.

“IOM is talking about flying back 500 but by that time there will be another 2,000 here,” said Haradh local council chief Sheik Haidar.

“I’m willing to go to Ethiopia and Djibouti to explain how challenging migration is because the picture there now is that you can go to Saudi, [and you can get] thousands of dollars and dream jobs,” he added.

Conversations with migrants in Haradh suggest many think it will be socially difficult to explain their lack of success, and that means thousands continue to cross into Yemen with little appreciation of the risks and difficulties.

“The problem is that somehow at the origin people are not receiving the information. They are still thinking that this is an El Dorado and it will change their lives,” said Ould Cheikh Ahmed.

“The reality is that the border is now totally fenced or closed and the camps that are receiving them in Yemen are completely overwhelmed, so it’s a dramatic situation.”

He says part of a solution would be a regional conference between the concerned countries including Yemen, Ethiopia and Saudi Arabia among others.

“It’s a case that has to be addressed with a sub-regional approach. The point is simply to say that it goes beyond the possible effort of the government of Yemen and the possible financial means and capacity of Yemen.”