The Jordanian government is implementing new measures to improve security for the Syrian refugees at Za’atari camp, but aid workers say the efforts are limited by funding constraints and have yet to make a difference.

The entrance to Za’atari - now Jordan’s fifth largest city - is a chaotic hodgepodge of Syrian refugees, Jordanian citizens, journalists, aid workers, vans and water trucks, with up to 10,000 visitors a day.

As the numbers in Za’atari have swelled, safety and security have degenerated, with theft, fires and riots commonplace. Residents say there is palpable tension in the air; aid workers have been attacked, even hospitalized, and journalists beaten. Security is often the only item on the agenda at camp coordination meetings.

“We’ve got grave concerns for the security situation in Za’atari - not only for refugees, but also for our staff,” said Andrew Harper, representative of the UN Refugee Agency (UNHCR) in Jordan. “That’s part of the reason we are embarking on a major programme with the security apparatus, so that they have the means to enhance security in camp… The sense of impunity must be removed.”

Gateway to a city

The identification system governing entrance to and exit from the camp is “opaque, confusing and open to abuse,” Mathew Russell, security advisor to the NGO Norwegian Refugee Council (NRC), told IRIN.

Tents, mattresses, gas and other products are smuggled in and out through a thriving black market, which often charges refugees exploitative prices for essential goods, aid workers say. Tents and food items, clearly marked with agency logos, can be seen for sale in the nearby city of Mafraq and in the desert on the way to Za’atari.

The UN Children’s Fund (UNICEF) has lost US$1 million worth of taps, showers, latrines and other material; UNHCR has had hundreds of thousands of dollars in kitchen supplies disappear. Even fences have been stolen, Harper told IRIN. He and others say worse crimes could be taking place inside the camp, though no one is really sure.

This month, local media reported that the Jordanian police busted large amounts of heroin sold by Syrian refugees in Za’atari. One refugee told IRIN that she was twice taken outside the camp and brought back by smugglers without being questioned. (Refugees are officially not allowed to leave the camp unless they are “bailed out” by a Jordanian citizen.)

“Imagine having a gate to a city when you are controlling everything that comes in and out,” said Saba Mobaslat, who leads Save the Children’s programmes in Jordan relating to the crisis in Syria. “It reaches a point when it is impossible.”

Anmar Alhmoud, rapporteur of the government’s higher steering committee for Syrian affairs in Jordan, acknowledged the “illegal” movement of people across the camp’s border, but said rumours of rape and the presence of weapons inside Za’atari “are blowing everything out of proportion.”

"For all those people who are questioning the situation in Za’atari, help us by contributing to funding this… The camp is as good as what people’s commitment to it is."

Still, there is concern the insecurity is could be felt well beyond the camp’s borders. Some analysts, like Hassan Barrari, an international political science lecturer at the University of Jordan, say the government may fear “hidden groups” penetrating the camp and escalating problems.

“You literally have to wear a helmet”

Camp resident Hajjar Ahmad, 37, says that she no longer feels safe leaving her children on their own in their tent when she goes to collect donations from aid agencies or to visit the doctor.

“Nowadays, there are too many people going inside and outside of the camp every day,” she told IRIN. One taxi driver said he thinks twice before taking customers to Za’atari, for fear of having his car windows smashed.

Aid workers have been frequently attacked during aid distributions. Initially, riots and violent protests were motivated by poor living conditions and delays in receiving assistance. But increasingly, refugees with few other means of self-expression riot over everything, from who was first in line to their village being bombed.

“Before, riots used to happen for a reason,” Mobaslat said. “Now, riots happen for everything and nothing…You literally have to wear a helmet. You never know when you’re going to be hit by a stone.”

New arrivals to the camp, who have witnessed more violence in Syria, are “louder and more violent” than those who arrived at the beginning of the crisis, she said.

“Riots are mainly planned by single men who just want trouble,” said Marwan, a camp resident. “Most refugees riot and protest at night after planning it during the day. These are different from clashes happening in the day during aid distribution.”

Alhmoud says there are around 2,000 single men in the camp and that most of the security problems are due to such “agitators”.

Six staff of Save the Children went to hospital in January after a riot. The organization has had to replace the windows of three vehicles after they were shattered by rock-throwing children, some as young as three or four. In another incident, gendarmerie fired tear gas on refugees - who were also throwing rocks - at the food distribution site of Save the Children and the World Food Programme; aid workers were caught in the middle.

Russell said on average, six or seven “significant” incidents a week force NRC staff to temporarily move locations. “There’s a lot of start-stop,” he said. “It really does stifle work.”

One aid worker said that she does not feel safe walking around the camp as she feels “constantly harassed”.

In March, the Jordanian police took over camp management from the Jordan Hashemite Charity Organization, a local NGO that had been operating the camp on behalf of UNHCR since its opening in July 2012.

Camp administration now falls to a new entity known as the Syrian Refugee Camp Directorate, which reports directly to the Ministry of Interior. Regular police man the entrance, and checkpoints of the gendarmerie (known as Darak), dot the road encircling the camp. Special forces of the gendarmerie intervene when incidents arise, and according to the prime minister, police in civilian clothes are also present. The government has decided to erect a fence and berm around the contours of the camp, Alhmoud told IRIN, “to prevent any foul play from the outside and the inside.”

"Our Syrian brothers and sisters came seeking refuge to be safe from shelling and violence in their home country,” he said. “The least we can provide them with is safety on our land.”

Za’atari Camp for Syrian refugees in Jordan: Overcrowding, combined with strong winds in the desert camp, has led to fires in the refugee tents 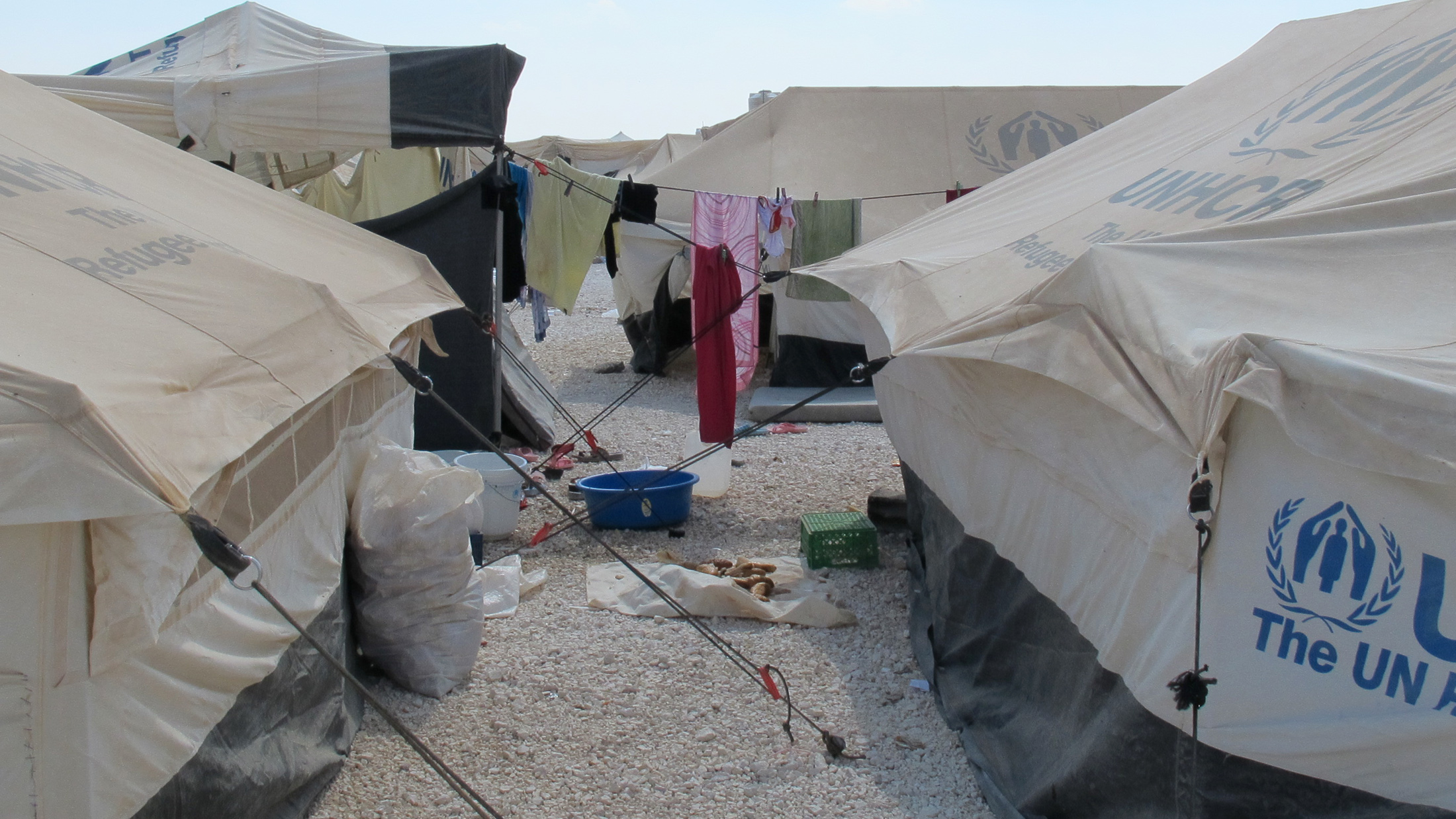 Alhmoud promised a “total improvement” in the security situation within a week or two, once police buildings are set up outside the camp and officers begin conducting patrols inside. “Every day, there is a difference… Things are improving… Law and order will be established.”

Aid workers urge better engagement and coordination with police, more clarity on who is responsible for what, and police training on international norms vis-à-vis refugees.

“Camps should be managed by people who have training in dealing with refugees and have the experience in delivering aid, fundraising, as well as management,” said human rights activist Issa Marazeeq.

Some police have been on UN peacekeeping missions abroad, and are attending seminars with UNHCR on relevant international norms, Alhmoud said. But Mobaslat noted, “That does not guarantee that [the knowledge] trickles down to the guy standing at the gate. Some prerequisites around international law need to be part of an induction training prior to deployment to the camp.”

UNHCR has struggled to keep up with the “massive demand” for training that is “overwhelming the whole system,” Harper said.

Funding remains another major constraint: There is not enough money for sufficient lighting and electricity, let alone for a large security force.

UNHCR will be providing over $2 million in support for the new Syrian Refugee Camp Directorate, including accommodation and vehicles, to allow the police to respond more quickly and to patrol inside the camp, but Harper said it will not suffice.

“For all those people who are questioning [the situation in] Za’atari, help us by contributing to funding this… The camp is as good as what people’s commitment to it is.”

Aid workers say there are also less-expensive tools to use: UNHCR is working through imams to promote messages of nonviolence, holding camp elections, and looking to break the camp into sections that can be more easily managed. The government has also started using boreholes to supply water from inside the camp, to decrease the number of trucks coming in from outside.

“We’re doing everything that you could expect us to do, but you have 110,000-plus people in a camp,” Harper said. “It’s a massive challenge.”