The 4,000 people of Fifa village in northwestern Jordan rely on seasonal agricultural work in the Jordan Valley, sheep-breeding, and cash and material assistance from the Social Development Ministry, but they and many others are being driven further into poverty.

Rising fuel prices, an earlier rise in food prices, the spillover of the Syrian crisis, and a slowdown in charity work post-recession have increased poverty and decreased food security in a country that already lacked sufficient support systems and strategies for the poor, local charities say.

The prices of some types of fuel have increased by nearly 40 percent since a November 2012 government decision to lift the fuel subsidy, so Salha* (50 and unemployed) can no longer afford to heat her home. Food distributions she used to receive from local charities have slowed, if not stopped.

"There is no bread, no flour, no sugar in the house any more," she told IRIN.

The government lifted its fuel subsidy in an attempt to reduce the budget deficit in order to secure a US$2 billion loan from the International Monetary Fund. The price of gas, used for cooking and heating, rose from 6.5 Jordanian dinars per cylinder to 10.

Some food prices - which had already increased as the Syrian crisis disrupted supply and export chains - increased further.

Chicken and eggs for example, have risen in price by 25 percent since November, according to the Foodstuff Traders Association, because of the high heating costs involved in raising chickens.

Overall, the average Consumer Price Index for food prices has risen steadily from 2009 to 2012, according the Jordanian government’s Department of Statistics, though there are seasonal changes and the price of cereals has remained stable.

Several Jordanian families in Fifa have been left without heating this winter, said Fadyah Saaden, president of the Women of Fifa Village Charitable Association.

"How can someone, like a single elderly woman, surviving on JD 70 of assistance from the government use heating this winter? What would be left for food and other needs?" she told IRIN.

As for food, "people just eat less and less,” Saaden said, "but given their poor diet [to begin with], it means people are eating chicken or meat once every two months instead of once every month."

According to Mutasem Hayarai, coordinator of the National Alliance Against Hunger and Malnutrition (NAJMAH), a semi-governmental body created in 2004 to coordinate national efforts to combat hunger and malnutrition, almost a quarter of the children living in Fifa village suffered from anaemia even before the price hikes.

"We are struggling to find work in farms nowadays. So many people fled here. It is easier for an employer to hire an entire [Syrian] family because it costs them less money.”

Now, they are even more vulnerable. To try to improve children’s diets, NAJMAH is now providing some families with sheep so they can make dairy products.

The influx of at least 230,000 Syrians fleeing conflict next door has also increased the competition for jobs.

"We are struggling to find work in farms nowadays,” said Jumana Bawaz, 23. “So many people fled here. It is easier for an employer to hire an entire [Syrian] family because it costs them less money."

Their presence has also put a strain on families hosting them and on public services like water, health and education.

“The influx of refugees is putting enormous pressure on local communities,” said Dominique Hyde, representative of the UN Children’s Fund (UNICEF) in Jordan. “There has been a real empathy in welcoming the refugees, especially when one considers the poverty levels in this country.”

Figures released recently by the Ministry of Planning show an increase in poverty rates from 13.3 percent in 2008 to 14.4 percent in 2010. The study defines the poverty line as living on less than JD 68 per person per month ($3.20 a day).

Experts, however, say the scale of poverty is probably much worse than depicted by official numbers, given the changes in the last two years.

She said the number of poverty pockets - defined by the Ministry of Planning as areas where poverty rates are higher than 20 percent - are no fewer than 45, higher than the official figure of 32.

Although there are more job opportunities in urban areas, such as the capital, increasing living expenses make it harder for poor families to live there.

“My wife and our newborn baby go all day without heating. We only switch the heating on when I finish work and the three other children come back from school,” said Ahmad Khaldi, a resident of Amman. He earns JD180 a month working as an electrician.

“Most families we deal with have been providing their children with a late lunch and skipping the dinner meal. Parents say they cannot provide protein-rich food to their children given that meat and eggs are so expensive nowadays,” she told IRIN.

In 2008, 36.5 percent of an average Jordanian family’s expenditure was related to food, according to the World Food Programme. A survey it conducted that year on food security in Jordan’s poverty pockets found that 60 percent of households in those areas had borderline, poor or very poor access to food - a measure of their ability to cope with shocks and to cover minimum food expenditures. Almost 11 percent of households in the poverty pockets were totally dependent on gifts and handouts.

Some analysts blame the government.

“In the past few years, the government has failed in creating developmental projects aimed at alleviating poverty and creating jobs,” said Ghoniemat. “Increasing food prices accompanied by high rates of unemployment have dragged middle-class and lower middle-class families below the poverty line as they can no longer meet their needs. Hence, the number of the poor has increased.”

The yard of a home in the Jordan Valley's Fifa village, one of the poorest parts of Jordan. Poverty is increasing in Jordan, local charities say, due to rising food and fuel prices, and the impact of the Syrian crisis next door 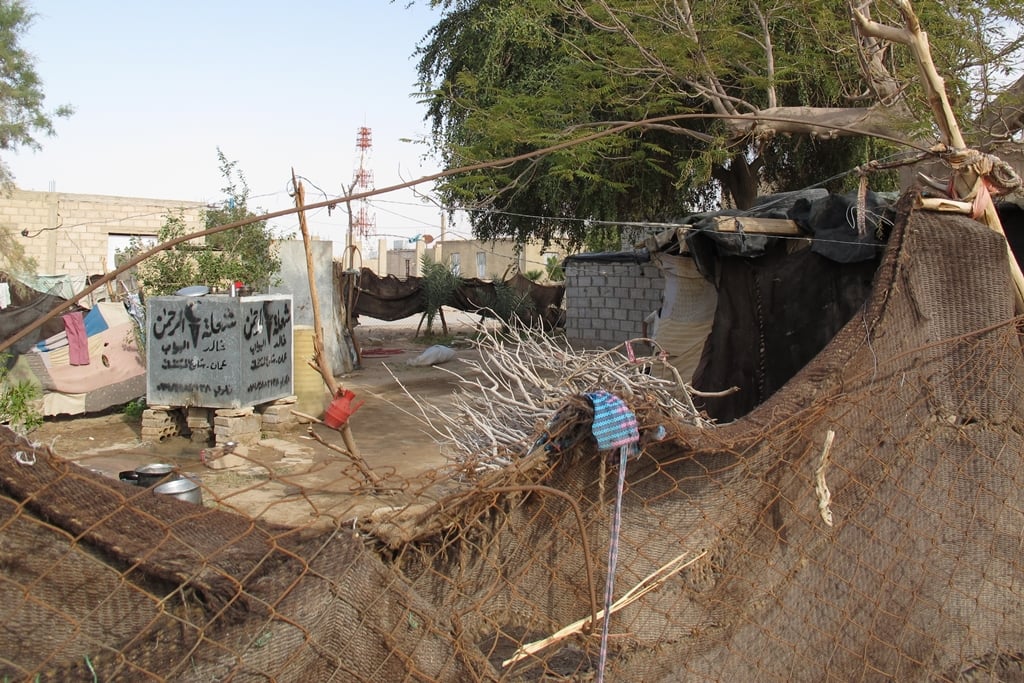 According to Qasim Hammouri, economist and lecturer at the University of Yarmouk, inequitable growth is at the root of the problem.

"Most development projects are centered in the capital and major northern cities such as Irbid and Zarqa. In the south, there are no job opportunities, or even proper infrastructure," he told IRIN.

In January, the Ministry of Social Development announced a new seven-year strategy aimed at reducing poverty rates from 14 to 7 percent by the year 2020.

According to Social Ministry spokesperson Fawaz Ratrut, the strategy will focus on creating jobs and strengthening infrastructure. "We are also paying attention to coordinating efforts between all government bodies responsible for addressing poverty such as infrastructure, aid, training and finding job opportunities," he told IRIN.

But the first challenge, he said, is to secure funding for implementing the strategy.

Charities struggling to keep up

Charities providing assistance to the needy in Jordan say they are struggling to help the increasing number of needy families.

Hayarai, of NAJMAH, said funding to help the poor and donations from the private sector have decreased “drastically” over the past few years because of the global financial crisis.

NAJMAH’s National Goodwill Campaign, for example, used to help around 25,000 families every year, but "is now struggling to reach this number even as poor families have increased”.

Saaden, of the local charity in Fifa, said the most her organization could do in 2012 was distribute a few meals during Ramadan: "Now there is hardly any aid coming.”

Lack of coordination between local and international efforts to combat poverty is another major challenge.

"There are so many programmes out there to address poverty in Jordan, but it could be more effective if it were all well-coordinated,” said Abdullah Zubi of NAJMAH. “Sometimes there is more than one project in one area but none in another."

A 2012 report by the International Food Policy Research Institute recommended that to reduce poverty and improve food security, countries of the Arab world should improve data in order to make evidence-based decisions on policies; focus on economic growth via manufacturing and the service sector rather than agriculture; reform the allocation of public spending; and hold national dialogues on economic development strategies.