Kurem Sulla is well aware of the importance of the media when it comes to early warnings of a natural disaster.

“I’ve lived through a cyclone. I’ve seen its destruction,” the 35-year-old labourer, clutching a transistor radio to his ear, told IRIN outside his home in the town of Mohadapur, a community of farmers and casual labourers north of the port city of Chittagong.

On 30 April 1991 Cyclone Marian left more than 100,000 dead along the southeastern coast of Bangladesh.

“We need to be prepared,” explained the father-of-two, who now listens to Radio Sari Giri, one of 16 community radio stations recently established in Bangladesh and which broadcasts in the local Bengali dialect.

More than a third of the country’s population (some 50 million people) live in coastal areas. Many are in rural areas where radio is the main medium of information.

“Broadcasting in the local dialect of Bengali is particularly effective,” Bazlur Rahman, head of the Bangladesh NGOs Network for Radio and Communication (BNNRC), comprising 150 local NGOs, said, describing the outreach potential as huge.

“It allows us to reach communities with timely information where and when they need it most,” said Mohammad Abdul Wazed, additional secretary of the Bangladesh Ministry of Disaster Management and Relief.

This policy was followed by a national strategy on community radio in 2011, with a pledge for limited government funding in the future - though this has yet to materialize.

The government has issued licences to 16 community stations, including eight in cyclone-prone coastal areas (Khulna, Satkhira, Cox’s Bazar, Chittagong, Bhola, Hatiya, and two in Barguna), and by the end of 2013 BNNRC hopes to see 60 community stations established, with some 400 nationwide by 2021.

Although still in its infancy, community radio (broadcasting on FM in a number of dialects) offers more than 120 programming hours a day including weather forecasts, news, entertainment, and community talk shows.

A radio presenter at Radio Sari Giri in southeastern Bangladesh, one of 16 community radio stations in the country now working to promote disaster preparedness 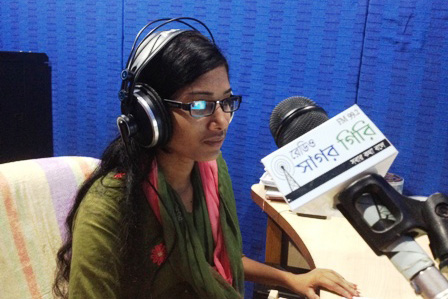 “Disaster preparedness is now an important part of our programming,” said Shah Sultan Shamim, station manager for Radio Sagor Giri in the town of Muradpur in Chittagong District, adding that the station has increased its audience in 2012 and now has more than 100,000 listeners tuning in at some point during the five hours per day the station is on air.

Community radio programmes typically cover environmental and climate change issues but also provide practical tips on what to do if a cyclone approaches, he explained.

Many listeners participate in the programmes through SMS text messages or phone calls; some radio stations report receiving an average of 500 SMS messages a day.

According to BNNRC, about 50 percent of radio listeners in Bangladesh listen on their mobile phones.

“Nowadays most people in Bangladesh have a mobile phone and listen to radio that way,” Radio Sagor Giri’s Shamim said.

Most stations are funded by local NGOs; a smaller number by development partners and the government. Of the 536 young people working in community radio stations most are volunteers.

Nearly all stations need better equipment, including computers and voice recorders, and training.

And with power outages common in Bangladesh, broadcasts can often be suspended for extended periods as the cost of fuel to run a generator can prove prohibitively high.

“It’s a huge cost and some community radio stations don’t have a generator at all,” said BNNRC’s Rahman. “This [equipment and training] is where international assistance would be greatly appreciated.”