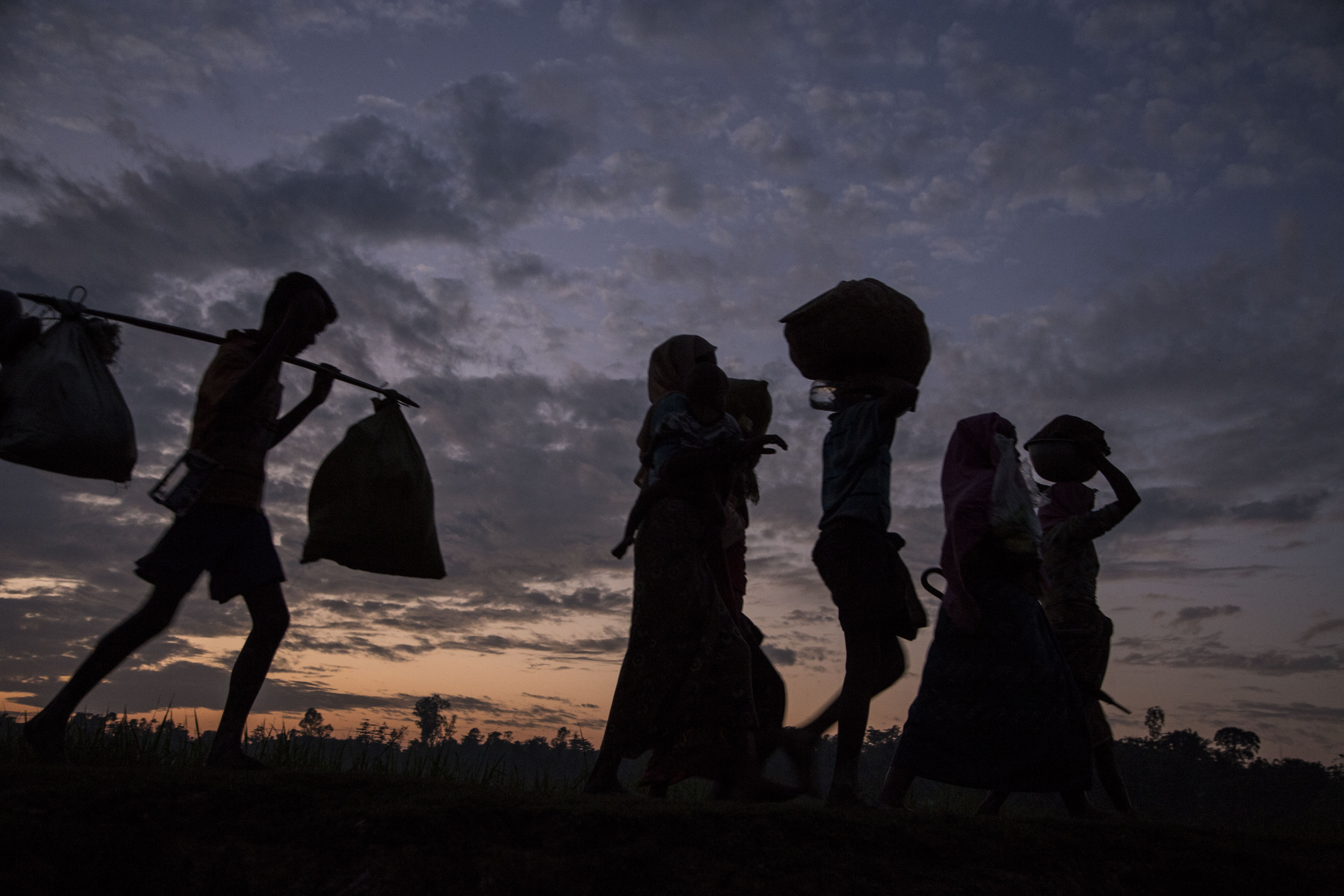 Out of earshot of worshippers at his makeshift mosque in the sprawling Kutupalong refugee camp, the imam – a middle-aged man dressed in a white robe and prayer cap – begins to open up. “It’s good that you interviewed me alone,” he whispers, gesturing at a group of men standing outside. “There are ARSA people around.”

Like hundreds of thousands of other Rohingya Muslims who have fled Myanmar’s northern Rakhine State for Bangladesh in recent months, he endured years of persecution culminating in a brutal crackdown by the Myanmar military. Human rights groups say soldiers and local Buddhists drove Rohingya out with a systematic campaign of massacres, rape, and arson.

But the imam, who asks not to be named for fear of reprisals, feels caught between two threats. “We are persecuted on both sides: by ARSA and the military,” he says.

ARSA, or the Arakan Rohingya Solidarity Organisation, is the fledgling Rohingya insurgency whose attacks on police posts across northern Rakhine on 25 August provided the justification for the massive army clampdown that has prompted the region’s most severe refugee crisis in decades.

While many of its members and supporters have now been pushed into grim and overcrowded refugee camps outside Bangladesh’s port town of Cox’s Bazar, analysts say the movement is likely seeking to regroup.

Pressure from both sides

Despite the devastating impact of their actions on the entire Rohingya population, ARSA’s name still commands a mix of cautious respect and fear among some in the Bangladeshi camps.

The imam speaks in a low hush as he recounts how, in Rakhine State’s Maungdaw township, where most of the group’s attacks have taken place, insurgents targeted Rohingya “brokers” or village leaders who were close to Myanmar authorities and accused of being informers. They slashed the leaders’ throats, he says.

These killings began as ARSA was planning its first attacks on Myanmar authorities, according to research from the International Crisis Group, a conflict resolution nonprofit. Myanmar officials have said dozens of Rohingya were killed in this way in the lead-up to 9 October 2016, when ARSA raided several police posts in northern Rakhine in a precursor to this year’s explosive violence.

Around that time, the imam says soldiers came to his village and warned residents not to feed insurgents or otherwise help the organisation.

While many men and boys joined up voluntarily, some were forcibly recruited or given cash incentives, according to research by Fortify Rights, a Southeast Asia-based rights group.

But now in Bangladesh’s bleak camps, where stick-thin refugees struggle to survive from one day to the next, few people want to talk about the insurgents. Some view the group, and the Myanmar authorities’ portrayal of them as terrorists, as a sort of sick joke, given their present circumstances.

For decades, the Myanmar authorities have persecuted the Rohingya, deeming them illegal immigrants, stripping them of citizenship, and severely curtailing freedoms including education and movement. Some Rohingya say soldiers regularly came to their houses to confiscate sharp tools, even kitchen knives.

“We have nothing. We can’t eat, so how can we fight?” says Hasina Begum, a woman in her mid-twenties.

“You can’t fight with empty hands,” adds one of her relatives, a middle-aged man named Mohammad Rafique.

‘He said to stand against the military’

But some young men, exasperated after years of marginalisation and persecution, are willing to openly praise ARSA.

“I heard about that organisation but I haven’t been able to connect with it – if I got the chance, I’d do it,” says Abdul*, a Rohingya man in his early thirties who worked as a shopkeeper in his village in Maungdaw township before he fled to Bangladesh along with the recent wave of refugees.

Abdul says he hasn’t known a “blow of happiness” since he was seven years old. “Even as a shopkeeper or farmer we worried that the military would come and snatch our crops or the profits of our business,” he says. “And what would they do with our sisters and mothers?”

He says he learned about ARSA from a video clip of its leader, Ata Ullah, circulated on Rohingya Vision, a Rohingya-language TV channel. Ata Ullah, a Rohingya man reportedly born in Pakistan who appears in the group’s videos, is often described as a highly charismatic leader; some Rohingya in the camps have pictures of him on their cell phones.

“I listened to the speech of that man. He said to stand against the military,” says Abdul. “‘They have raped our mothers and sisters and tortured and harassed us,’ he said.”

While Myanmar dubs the group “extremist terrorists”, there is no evidence that jihadist ideology is a motivating factor for recruits. But some reports suggest religion has played more of a role than admitted by the group, or at least international backers who publicly depict it as an ethno-nationalist movement.

And, according to the International Crisis Group, religious leaders conferred legitimacy on the group — or were corralled into conferring it, as the imam implies — by issuing religious fatwas supporting its cause. Younger imams have given their blessing to ARSA’s operations.

“This ARSA group, if it fights with the government, I believe that is OK,” says one imam, Nabir Hossein, who runs a mosque which, like many in the Kutupalong refugee camp, is affiliated with Tablighi Jamaat. This is a global Sunni Muslim movement that encourages followers to observe conservative practices but describes itself as apolitical.

“But we are not part of ARSA,” says Hossein. “Why did the Myanmar government torture our village? Everyone is not ARSA.”

Another imam, a man in his late thirties who gives his name as Mahmood, says villagers are rising up against government torture. “That’s why maybe some have stood against them,” he says. “We need equal rights like Buddhists.”

Little is known about ARSA’s origins and plans, but International Crisis Group research suggests the leadership consists of several Rohingya émigrés based in Saudi Arabia who have been directing a loose network in villages throughout northern Rakhine.

“This is a group that was not operating in uniforms out of camps in the hills – it was very much operating in cells in the villages,” says Myanmar-based analyst Richard Horsey, a consultant with the International Crisis Group. “They already had a fairly large network of members and supporters and those people are now in Bangladesh, so I suspect it’s less a question of recruiting and more a question of regrouping and planning what it will do next."

Aid workers who spoke to IRIN are also worried about the potential for support for the group to grow in the mushrooming refugee camps.

At a summit last week, UN Secretary-General António Guterres described the crisis as a potential source of regional instability and radicalisation.

The growing danger of child labour in Rohingya refugee camps

Several killings of local Rohingya leaders in Bangladeshi camps this year are believed to be linked to ARSA, according to a Western official who asked not to be named as they were not authorised to speak to media.

Myanmar has arrested several people it claims are ARSA members in recent weeks.

Horsey believes it’s unlikely the leaders of the group are in the Bangladeshi camps, where the military has a strong presence, but thinks they could be planning fresh attacks from bases elsewhere.

“The obvious possibility is cross-border attacks that require very different equipment and a sort of safe haven in Bangladesh, and if they will get that I don’t know, but certainly the conditions are ripe for that,” he says.

Fortify Rights has raised the spectre of further attacks spurred on by the Myanmar military’s brutality. “The lack of accountability for atrocities committed by the military may aid ARSA’s recruitment efforts and contribute to future conflict and cycles of atrocities,” the group said in research published last week.

They may find willing participants in desperate young men like Abdul, the former shopkeeper now forced to spend his days in a hot and crowded tent waiting for handouts.

“If the authorities can’t solve this problem, and anybody gives us advice on fighting, then I would fight for my resources and my village and my house,” he tells IRIN. “We can’t do it alone. If all the young Rohingya agree then I will decide to fight.”

(TOP PHOTO: Rohingya refugees who crossed the Naf River overnight make their way through a no-man's land area along the border between Myanmar and Bangladesh on 2 November 2017. Roger LeMoyne/UNICEF)