Freelance journalist based in Harare

The advert in the jobs section of a Zimbabwean newspaper read: “Vacancies in the Middle East. For those interested please contact …”

When Soria Hove*, 34, spotted the ad earlier this year she immediately called the number provided and was told to visit the agency’s office and bring along her qualifications.

A few days later, anxious but hopeful, she walked into a well-appointed office with neatly-dressed, professional staff. The job on offer was as a maid in Kuwait. The salary would be US$750 with $150 deducted each month as reimbursement for her air ticket.

Hove was over the moon. The average wage in Zimbabwe is $253 a month—and that's for just five percent of the population who actually have a formal job.

“It was an opportunity of a lifetime,” she told IRIN. “Finally I could earn an income for the first time and support my family.”

If it seemed almost too good to be true, that’s because it was. Hove wasn’t getting a real job, instead she was about to be trafficked and exploited.

Not what it seemed

The realisation that something was wrong began to dawn on Hove at the airport in Kuwait. She and several other African women were told to line up in a separate queue, and were then marched single file by a police officer, who had confiscated their passports, through the airport to a basement room.

The policeman then handed over their passports to officials sitting behind computers, and in return received a payment.

“The officials harassed us and held us hostage for more than 10 hours in the basement waiting for the [employment] agents,” said Hove.

Her “agent” finally arrived, and took Hove and three other women to her home. A day later, a couple came to the house and again money changed hands and Hove went to work for them, ostensibly as a maid.

But what followed was months of abuse. The hours were extremely long, sometimes she was not fed, surviving only on tea, and she was also raped repeatedly.

“The males in the home would take turns to sleep with me,” she told IRIN.

On one occasion, the head of the household approached Hove while she was ironing and started to fondle her. When his wife suddenly appeared, he accused Hove of making advances on him. They took turns beating her up.

Hove finally managed to escape when she found a phone SIM card while she was cleaning. She hid it, but didn’t touch it for five days for fear of being accused of theft. She’d been told punishment was the cutting off of a hand.

When she finally plucked up the courage, she discovered the phone could not make calls – but she could access the internet and the instant messaging service, WhatsApp. She searched for human trafficking organisations that could help, and eventually located one in Kuwait. They got her out of the house.

It was only then that Hove discovered her story was far from unique. She joined 32 other Zimbabwean women who had also been trafficked, and were being sheltered by the Zimbabwean embassy while they awaited repatriation.

Shuvai Badza* was yet another victim of the scam. She remembered how excited she felt at Harare airport waving goodbye. “I knew this journey meant positive change for me my family,” Badza told IRIN.

In Kuwait she and other African women were handed over to an agent named Lailla. As they left the airport she asked Laila if she was dressed well enough for the hotel job she thought she had been recruited for.

“Is that what they lied to you about?” Laila replied. “You are going to work as a slave.” Badza remembers going numb with shock.

She worked for a couple for 40 days, surviving on tea and the chocolates she managed to steal. “I was told to bathe six times a day as they said Zimbabweans smell,” she said.

Fortunately, she had hidden her cell phone, on the advice of one of the women she had met at the agent’s house, and like Hove used it to finally escape.

Zimbabwe has one of the best-educated workforces in Africa. But its economy is crippled. A severe cash crisis this year has led to a raft of retrenchments. Public sector pay was delayed in June, triggering protests, and this week strike action has spread.

Activists have been using the hashtag #ShutDownZimbabwe2016.

Zimbabwe is an agro-based economy but drought has slashed production. An estimated 4.5 million people – half of the rural population – will need food aid by March next year.

According to the International Labour Organisation, forced labour is a global business worth $150 billion a year.

Trafficked women see none of that money. The definition of their exploitation involves deception and coercion, with power wielded over vulnerable and desperate women like Hove and Badza.

In May, as many as 200 Zimbabwean women were believed to be stranded in Kuwait. According to press reports, local recruiters were earning $500 for each woman they signed up, and the agents then sold them on to Gulf families for $2,500.

Kuwait is a known trafficking hub. According to the US State Department’s 2015 Trafficking in Persons Report, “Kuwait does not fully comply with the minimum standards for the elimination of trafficking and is not making sufficient efforts to do so.”

Kuwait’s sponsorship law, which ties a migrant worker to an employer, restricts workers’ movements – and is a license for exploitation. Domestic workers are particularly vulnerable to forced labour inside private homes, and there are regular, grim, media reports of the rape, murder and torture of maids.

An outpouring of civic action in Zimbabwe has raised money to help with the repatriation of the stranded women. A petition was also launched by the Standard newspaper, condemning “sex slavery” and calling on Kuwait to “set free human trafficked Zimbabwean women & punish perpetrators”.

A former Kuwaiti ambassador to Zimbabwe, Ahmed Al-Jeeran, has been charged for allegedly being the mastermind of the trafficking ring, and embassy staff have been arrested.

But while the Zimbabwe operation may have been shut down, Kuwait remains a lure for other poor and susceptible women. 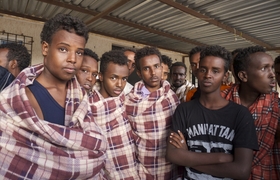