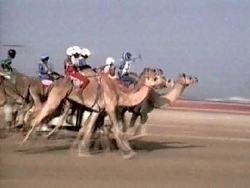 From a distance, a small boy-like shape can be seen bobbing up and down frantically on the back of a camel . On closer inspection, that strange object is, in fact, a robot and not a child.

Until last year, hundreds of children were recruited into the centuries-old Arab sport of camel racing because of their low weight and height, which meant the camels could run faster.
Many children suffered injuries such as broken legs and hands from falling off camels, which can run at up to 30km per hour.

The Worst Forms of Child Labour Convention, which was passed in 1999, considers as a worst form of child labour “work which, by its nature or the circumstances in which it is carried out, is likely to harm the health, safety or morals of children.”

There are seven main human rights treaties, which have several Articles on children’s rights but the UAE has signed (on February 1997) and with some reservations, only the Convention on the Rights of the Child. It has not signed two very important treaties which have Articles on children’s rights. These are the Covenant on Economic, Social and Cultural Rights and the Covenant on Civil and Political Rights, which are both bound by international law.

However, in June 2005 the UAE issued a law banning the use of children under the age of 18 from racing camels. Violators face jail terms of up to three years and/or a fine of 50,000 dirhams (US $13,670). To date, 1,077 child jockeys have been repatriated, mainly to Pakistan. Other source countries for camel jockeys in the UAE included Bangladesh, Mauritania and Sudan.

In May 2005, the United Nations children’s agency UNICEF signed an agreement with the UAE to repatriate children formerly involved in camel racing and ensure that they are rehabilitated into their societies. This involves giving the children access to basics such as education and family life, which they were previously denied.

The UAE government has now allocated US $9 million to help in this rehabilitation process.

"I see this decision as a real opportunity for all the former jockeys to get back some hope that will help them to reintegrate into their communities and benefit from educational and vocational training programs that will advance their future," Rima Salah, UNICEF Deputy Executive Director, said on Tuesday.

UNICEF has been monitoring camel racing in the UAE since the ban last year.

"We are now done with phase one of the project which is full repatriation, and we have achieved a 97 percent success rate of re-uniting the children with their families," said Omar Shehadeh, Regional Donor Relations Officer for UNICEF in Dubai.

"Phase two is monitoring race tracks in case we come across any more children. But overall, the UAE did its utmost and we are very happy with the results so far."

Locally made robot jockeys are now the in thing.

"The robot is cheaper. It costs between 500 and 2,000 dirhams [US $136 to $545] and there are no other costs like salary, food and clothes," said Abdullah Moubarek al-Muhairi, head of the camel racing association at Watbah, the main camel racing track in the capital, Abu Dhabi.

"There is also no danger. Before, some of the children used to fall off and injure themselves, but now we don't have this worry," al-Muhairi told IRIN at the track.

There were once more than 200 children working on this track and farm, which is home to some 100 camels, according to officials.

Former child jockeys used to reside in farms attached to the race track, where they would tend to the camels when not racing them.

The children's days would be spent feeding and cleaning the animals rather than getting an education and they were told to keep their weight down so the camels could run faster when they raced.

On average, said UNICEF's Shehadeh, a child camel jockey could earn between US $200 and $400 a month net income, with most of their earnings sent back to their families.

"The whole problem is the poverty in the original countries," said Shehadeh. "They have large families so parents send one child away who can make money for the family."

The children are recruited by traffickers in the countries they come from and sent to the UAE.

An important part of UNICEF's project is to promote vocational training in the communities from which the former child jockeys came.

"We want to bring these children back to education because if they want to earn more than $300, they need a proper education to get a much higher salary in a less risky job in the future," said Shehadeh.

Now, instead of a flailing child, camels in the UAE are ridden by small robots which are tied onto camels by hand. The robot jockey has a whip attached, which is run by a drill motor and can be activated by a remote control device - similar in size and shape to a car alarm activator.

Weighing approximately three kilos, specialists say the robot is a good substitute for a child as it will never be too heavy for the animal to carry and it does not greatly affect the camel's performance in a race.

"The whip is only used towards the end of the track," al-Muhairi said.

Complete with in-house commentary on a local radio frequency, owners and spectators race in their cars alongside the camels and activate the whip at the push of a button.

Al-Muhairi said the new gadget is also helping to attract bigger crowds - a happy ending all round. "People not only come to see the camels, but they are more interested in seeing the robots now," he said.