This article is part of our in-depth coverage. Read more like this...
BUENAVENTURA

Pope Francis begins a six-day trip to Colombia today aimed at encouraging peace and reconciliation, but how much attention will be given to the uptick of violence in the remote Choco region that has displaced thousands and threatens to become a humanitarian crisis?

The papal visit comes as the country’s former guerrilla movement, the FARC, is transforming itself into a political party after more than half a century of war, and just as its smaller revolutionary cousin, the ELN, has signed a temporary ceasefire with the government.

In a statement earlier this week, Pope Francis called for a “stable and lasting peace” as a goal Colombians had “sought after for a long time”.

Many areas of Colombia have become less violent following the peace deal signed between the government and FARC in November. But fighting has continued in remote regions of the country, where the government’s control is contested by the ELN guerrillas and rival paramilitary groups, and in some areas it’s getting worse.

Humildad Conquista is one of the many victims of the violence, forced to flee her village in a reservation for indigenous people in jungle-covered Choco region.

Her diet has changed drastically as a result. Wild pigs, chicken, and river fish have been replaced by canned sardines and red beans that take hours to cook. Freshly grown plantains and yucca have given way to monotonous rations of pasta and rice.

“I began to skip meals because I’m not used to this kind of food,” said Conquista, an elder from the indigenous Wounaan community. “Rice and beans are not food in our culture.”

She says the change in diet has made her sick, and she was recently taken to hospital with a fever and intestinal problems.

Conquista had lived all her life in the remote rural village of Chagpien. But fighting between the Colombian military, ELN guerrillas, and Colombia’s largest paramilitary group, known as the AGC, forced her entire village to flee towards the port city of Buenaventura in March.

Currently, some 220 Wounaan are living in a youth centre, where classrooms have been turned into cramped sleeping quarters.

“We are used to having our own homes with rooms for adults and children,” said Jose Nilson Chamarra, the group’s spokesman. “Here, we’re are all mixed together and illnesses can spread fast.”

In the last few weeks, the FARC have decommissioned the last of their weapons – ­as the final steps in the peace accord – and have held their first convention as an orthodox leftist political party.

But in the largely underdeveloped Choco region, the peace deal has had the unintended effect of generating more violence, as smaller rebel armies like the ELN and local drug cartels fight over drug trafficking routes and other criminal industries abandoned by the FARC. 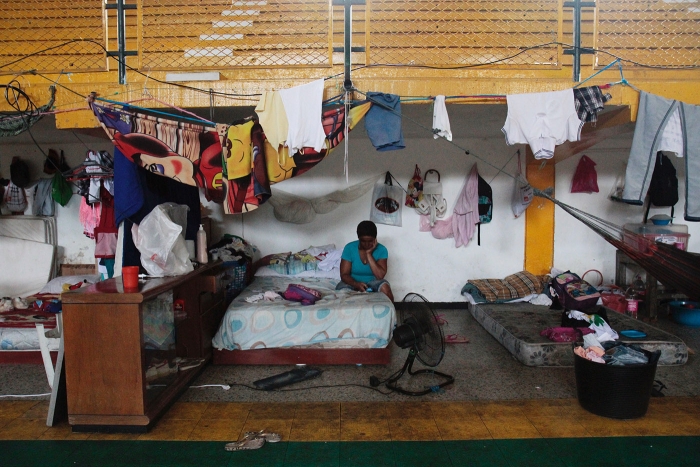 Manuel Rueda/IRIN
Stuck: Some 120 people from the Afro-Colombian village of Cabecer are sheltering in Buenaventura's basketball stadium

The fighting has created a series of humanitarian problems that merit urgent action by the government and local authorities, according to human rights groups.

Human Rights Watch, the UN refugee agency, UNHCR, and Colombia’s own rights watchdog have all issued alerts this year on the growing numbers of internally displaced people in the region.

“Choco can’t wait for help any longer,” said Carlos Negret, Colombia’s human rights ombudsman, after visiting the region in May. “Villagers are not being allowed to fish or tend to their crops – they are trapped [by armed groups]”.

According to Negret, more than 3,300 people fled their homes to escape the conflict in Choco in the first three months of 2017.

UNHCR says the number of “mass displacements” in Choco has grown from 13 in the first eight months of 2016, to 24 this year. Each recorded incident is where 10 or more families flee their homes.

Buenaventura, a large port city just a few hours from Choco’s southern border, is the destination for many. Others are arriving in urban areas within Choco where funding is limited.

But many of the displaced in Buenaventura complain that help has been slow in arriving.

Luper Riasco, a fisherman who fled to Buenaventura in March along with the rest of his village, told IRIN he waited five months for a government stipend of $340 that is meant to provide relief for his family of six.

But the amount is too small for the family to rent a home and feed themselves for that long, so the Riascos are living inside a basketball stadium in Buenaventura, on mattresses donated by the municipal government. Most of Riasco’s fellow villagers are doing the same.

“In our village almost nobody makes a salary. We live off what we farm and fish,” he said. “It’s rough here, because we depend on others for our food and shelter.”

Riasco said that even cooking food is a challenge. There are only three small stoves for the 120 people staying at the basketball stadium and cooking gas is rarely supplied.

“When the gas runs out, we have to go into town, put on a sad face and ask for scrap wood,” he explained. “At this point, all this begging has become embarrassing.” 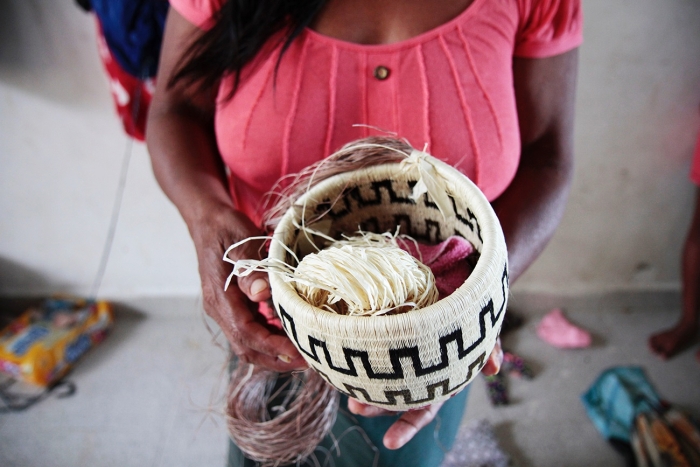 In spite of the hardships, many IDPs in Buenaventura said they weren’t prepared to risk going back home.

The Wounaan at the Buenaventura youth centre said they were still hearing reports of fighting between the military and the ELN near their village.

Riasco’s group at the basketball stadium was waiting for the local authorities to make good on a return plan. This was expected to include follow-up visits by aid agencies, a power plant to light up the village at night, and help replacing crops lost to the jungle while the villagers have been away.

If the ceasefire announced this week between the ELN and the government holds, that could be a game-changer.

Both sides are currently in peace talks in Ecuador. Under the terms of the ceasefire set to start on 1 October, the ELN has pledged to stop oil pipeline attacks and kidnappings in return for improved conditions for jailed ELN fighters and a government commitment to provide better protection against right-wing paramilitary groups for leftist community leaders.

Eduardo Alvarez, director of Colombia’s Ideas for Peace Foundation, told IRIN the longer-term solutions for Choco have to involve greater integration with the rest of Colombia via infrastructure, job programmes, and social services as this would diminish the reliance on illegal industries and fewer armed groups would be attracted to the region.

“It’s not rocket science,” said Alvarez. “But there have been many broken promises in this region.”

As other parts of Colombia rejoice in the reduction of violence, Riasco said he too longed for the day that his region would also see peace.

“President [Juan Manuel] Santos got a Nobel prize for his peace deal [with the FARC],” Riasco said, nodding his head. “But maybe the people who gave him that prize forgot about us.”

TOP PHOTO: Children forced to flee fighting around their village of Cabecera, play football in their new new home, a basketball stadium in the port city of Buenaventura. CREDIT: Manuel Rueda