“South Sudan terrorists need to be killed in order for peace to reign. Lawful killing has been practised by states since time immemorial.”

These are the words of Gordon Buay, deputy chief of mission at South Sudan’s Washington embassy, as posted on his Facebook page. Buay claims he’s simply defending his government, but some of those working for peace in South Sudan call it hate speech and accuse Buay and other prominent figures in the diaspora of fuelling the terrible conflict in this newborn nation.

But how much influence does angry writing on social media thousands of kilometres away from the fighting actually have in a country with limited internet and mobile phone penetration? About 21 percent of South Sudanese have phones and around 17 percent can get online – but these people are mostly those in towns, leaving rural communities largely excluded from tweeting, liking, and sharing.

Theo Dolan, director of PeaceTech Lab Africa, which works to reduce violent conflict using technology, media, and data, believes words do matter. He says PeaceTech’s research has shown that online hate speech – mainly coming from South Sudan’s diaspora in the US, Canada, the UK, and Australia – is contributing to the violence.

“The guys on the ground in Greater Upper Nile [one of the conflict’s front lines] may not have Facebook, but they have large family networks,” said Dolan. “They use their phones but also interact with their peers in person. They can spread the [hate speech] regardless of whether they have access to internet or not.”

Achol Jok from the #defyhatenow project, which works to counter online hate speech, agrees that the diaspora’s influence on the conflict is strong and says its writing is being passed on by word of mouth and phone calls.

“There is the perception if you live in the West you are educated and better informed,” she said. “When they write something or say something it is difficult for people to differentiate between what is true and what is not.”

A famine has been declared in parts of South Sudan caused by the civil war, which began in 2013 when President Salva Kiir, a Dinka, accused then vice-president Riek Machar, a Nuer, of plotting to overthrow him.

The Dinka and the Nuer are the country’s two largest ethnic groups. Their leaders are accused of having “born-to-rule” mentalities that not only discriminate against other communities but have also led to atrocities being committed by their soldiers and allied militias on the basis of ethnic targeting.

South Sudan has splintered into ethnic fiefdoms. The UN office coordinating humanitarian aid estimates more than 3.86 million people – one in every five South Sudanese – have fled their homes, including 1.89 million internally displaced people.

Dolan says Facebook, WhatsApp, and to a lesser extent YouTube and Twitter, are all popular with those in the diaspora who are spreading messages of hate.

But not everyone sees the link between social media and the violence of the civil war. 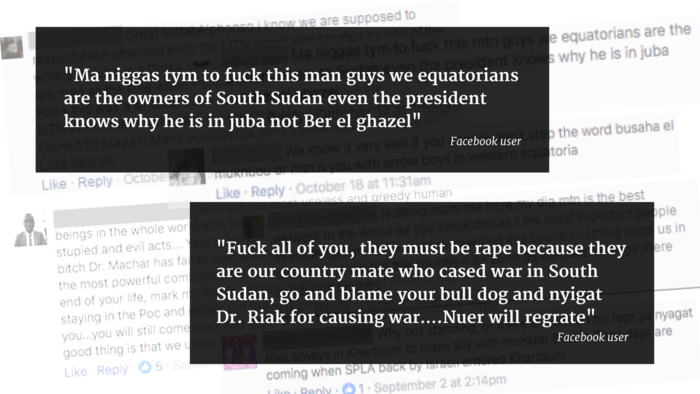 Saskia Baas, a South Sudan researcher who has spent time in rural areas, doubts that posts on social media platforms have much impact on the extreme violence in remote communities where the modern world is far away and many residents are illiterate.

She attributes the violence to national and local politicians spreading rumours and stirring up deeply entrenched beliefs and unresolved conflicts of the past.

“If you go to Malakal where the violence is extreme, or Bor, these places are so isolated,” Baas said. “The conflict is more about historical grievances that people have towards the other tribe – more than what someone is writing on the internet in Washington.

“When you interview them you hear a lot of stereotyping and racism, people saying things like, ‘they are inferior to us, they always fight, they are cannibals, they rape women, they are wild and uncultivated’.”

Jacob Bul, the co-founder of Ana Taban, a South Sudanese artists’ collective that campaigns for peace, says the country’s politicians are using online and offline tactics to manipulate young people to fight.

“It’s not just online,” said Bul, whose Ana Taban means ‘I am tired’ in Arabic. “Hate speech comes out in regular conversations, and most of our politicians create hate speech when they are addressing the public.”

Back in Washington, Buay insists that his Facebook writing is intended for a diaspora audience only – simply to counter the rumours and misinformation swirling around that community.

Buay compares his words to threats by Western politicians against the so-called Islamic State. “If the British government says they would fight [IS leader Abu Bakr] al-Baghdadi, is that hate speech?” asked Buay.

The long war for independence from Sudan, the bloody internal conflict that followed, and the desire for a more comfortable life or better education have forced many South Sudanese from their country and into the diaspora.

Susan Benesch, director of the Dangerous Speech Project and faculty associate of the Berkman Klein Center for Internet & Society at Harvard University, says it is only natural that some have taken their ethnic identities – and prejudices – along with them.

“If you come from a society that is deeply divided, in which groups of people fear and despise one another, why would you magically shed that when you move?” she asked.

“It’s not that they start disseminating hateful speech, it’s that they failed to stop. That sort of speech is very widespread in South Sudan.”

Others are compensating for leaving behind loved ones or trying to maintain contact with their much loved and missed homeland, according to Benesch.

“Maybe the strongest weapon you have is your words, or at least that’s how you see it,” said Benesch. “You mistakenly think that in some way you are doing your part or helping out – especially if you feel your people are in jeopardy at the hands of another group of people.”

Benesch says hate speech is a poorly understood term that is difficult to define.

This makes prosecution tricky, and despite its potentially damaging effects, convictions for those who spread hateful messages have been sparse – with just one in international law so far.

The International Criminal Tribunal for Rwanda found Ferdinand Nahimana guilty of inciting listeners of the Radio Télévision Libre des Mille Collines station to commit genocide in 1994. RTLM was notorious for broadcasting messages of hate about Tutsi “cockroaches” and urging Hutu to turn on their neighbours.

“Often, observers are looking for a smoking gun of incitement, where a specific speech leads to acts of violence, but that is very seldom how it works,” said Richard Ashby Wilson, the Gladstein Chair of Human Rights and professor of law and anthropology at the University of Connecticut. 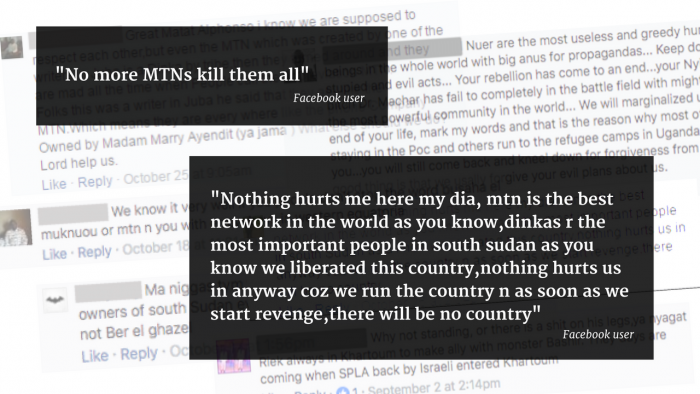 User comments on Facebook. The term MTN, a large mobile phone provider that uses the slogan “everywhere you go,” was being widely used on social media to refer to the Dinkas.

Dolan admits the online hate speech being monitored by PeaceTech doesn’t always contain direct threats, but instead uses coded language that might not appear obviously menacing.

PeaceTech has developed a lexicon of words that are offensive and inflammatory, including the term “MTN”, which the lab has linked to incidents late last year when buses travelling along the road from Uganda were stopped by armed gunmen asking if any MTNs were on board. Dinkas were then pulled out and killed.

At the time, the term MTN (a large mobile phone provider that uses the slogan “everywhere you go”) was being widely used on social media to refer to Dinkas, though they have since taken on the term to describe themselves.

“To me this is a direct case of language being used to catalyse violence,” said Dolan. PeaceTech Lab is using data from its research to develop tools to predict when violence may occur.

“Nyagat” or traitor is another common social media insult aimed at the rebels, and “Nuer Wew” (Nuer of money) refers to those politicians, regarded as sellouts, who have opted to work for the government.

For Ana Taban’s Bol these terms are more than just words: “The more we dehumanise people, the more we see them as ‘others’, we will not see them as human beings and can do anything to them.”