The crops were almost ready to harvest when fighting forced Naw Tin Swe’s family to flee to this camp on Myanmar’s eastern frontier where food supplies always seem to be running low.

“We had to leave our rice, our corn, our firewood,” said Naw Tin Swe. “Someone else maybe took it. We are so poor now.”

Naw Tin Swe is among about 5,500 people who have been stranded since September in Myaing Gyi Ngu, an area in Kayin State where relief supplies trickle in only sporadically as international aid agencies are largely blocked.

The military and its Border Guard Force militia sent people to Myaing Gyi Ngu when they began operations against a faction that had broken away from the Democratic Karen Benevolent Army, a former insurgent group that signed a “Nationwide Ceasefire Agreement” in 2015.

The NCA was a centrepiece of the previous government’s attempts to forge a peace deal with ethnic armies, some of which started fighting shortly after Myanmar’s independence from Britain in 1948. But only eight of the 15 groups invited to sign did so. Others were excluded from the process, which wrapped up just before elections ushered in a parliamentary majority for Aung San Suu Kyi’s National League for Democracy.

Many hoped that Aung San Suu Kyi’s electoral triumph would revive peace negotiations. The talks were fraught with distrust between the ethnic armed groups and the government, which was led by a party mainly comprised of former officers of the military that had ruled Myanmar for 49 years.

While expectations were high, Aung San Suu Kyi actually has limited influence over security matters. A military-drafted constitution reserves a quarter of parliamentary seats for serving officers and puts key ministries in military hands. The constitution allows no civilian oversight for military operations, which means that Aung San Suu Kyi’s government does not have control over the military offensives in Myanmar’s northern Kachin and Shan states, or western Rakhine State.

What Aung San Suu Kyi does have is a lot of political capital, and she has been criticized for failing to expend some of it to stand up to the generals. As horrific reports of atrocities committed against Rohingya civilians emerged, her government’s response has been outright denial in defence of the military. To the dismay of some ethnic leaders, she has not condemned the military’s intensifying offensives in the north. Instead, she implored them to sign the NCA.

“I want to request of national ethnic groups who have not signed yet the cease fire treaty to sign with bravery and self confidence,” Aung San Suu Kyi said in a 12 February speech.

Almost a year after the NLD took power, the picture is grim. Fighting has gotten worse, and the government was forced to call off the next round of peace talks scheduled for 28 February. As the security situation has declined, so has access to those affected, with humanitarian groups saying the government is preventing them from bringing aid to displaced people.

The situation is so bad that the UN’s special rapporteur on human rights in Myanmar, Yanghee Lee, recently told IRIN that she would call for a “special session” at next month’s Human Rights Council meeting in Geneva. At the moment, she is scheduled to present her report on 13 March, which will be followed by a two-and-a-half hour discussion.

“That’s just not enough,” she said.

Lee mentioned in particular the recent assassination of Ko Ni, a respected legal advisor to the NLD and a prominent Muslim, the surge in fighting in northern Myanmar, and alleged abuses of ethnic Rohingya during military counter-insurgency operations in western Rakhine State.

Myanmar government spokesman Zaw Htay did not answer phone calls to respond to IRIN’s questions about the deteriorating situation.

The UN says about 218,000 people are displaced inside Myanmar, mostly in temporary camps in Kachin, Shan and Rakhine states. Many of them fled after ceasefires broke down in Shan and Kachin in 2011, and when mobs of nationalist Buddhists chased minority Rohingya Muslims from their homes in 2012.

Another 100,000 people or so more recently fled their homes. They include people like Naw Tin Swe in Kayin State, as well as thousands more in Shan and Kachin who have escaped clashes between ethnic armies and government forces. But the vast majority are Rohingya and most of them escaped over the border to Bangladesh.

More than 73,000 Rohingya have arrived in Bangladesh since the military launched operations in October in Maungdaw, a border township, and the UN estimates that another 24,000 are internally displaced.

Amid reports of atrocities committed by the military against Rohingya civilians in Maungdaw, the government refused access to media as well as aid agencies. The World Food Programme reported that it has recently been allowed to distribute some relief items, but restrictions remain in place in Rakhine, as well as other regions in the north and east.

“Humanitarian access to conflict areas in Myanmar is currently worse than at any point in the past few years,” said Pierre Péron, a spokesman for the UN’s emergency aid coordination body, OCHA. 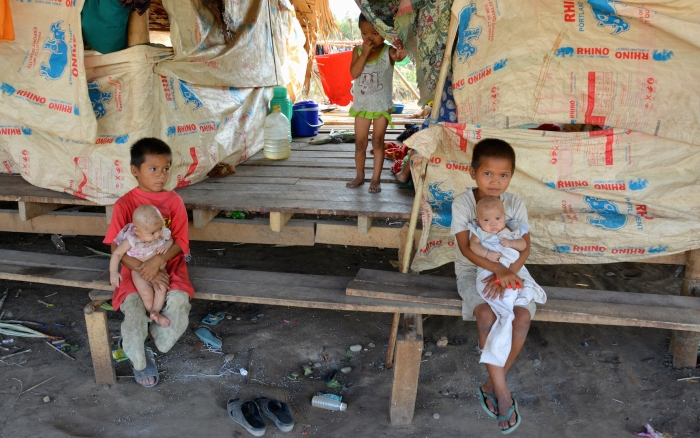 In this remote corner of Kayin State, camp managers complain that the government is hindering international aid delivery and said they relied on limited food donations from authorities and local community groups.

He showed IRIN the remaining supplies: enough rice, beans and onions to feed the camp for four more days, plus 300 kilograms of vegetables donated that day by a local group.

Arsen Sahakya, a WFP spokesman, confirmed that the organisation “does not have unfettered access to the camp” and that it had only been allowed to deliver two months worth of rations of high energy biscuits for children in October and November. He said state authorities told WFP there was no need for its assistance.

People in the camp disagreed, including Naw Kin Yin, who is seven months pregnant.

“(The food) is not really enough for me and the baby,” she said, adding that rations sometimes run out before everyone is fed. “Sometimes I go hungry, if I’m late and I miss the rice distribution.”

(Additional reporting by Kyungmee Kim and Jared Ferrie. TOP PHOTO: A donation of vegetables from a community group arrives at a camp for people displaced by fighting in Kayin State​. CREDIT: Paul Vrieze/IRIN)