Aleppo is nothing short of a chaotic horror story. Its surviving civilians are either trapped, in flight, or hunkering down under airstrikes and shelling.

What’s left of the rebel-held east of the city has been under assault by forces allied with Syrian President Bashar al-Assad for a month now, and under siege for far longer. More than 110,000 civilians have been killed since the fighting broke out in 2011. And that’s a conservative estimate.

After the indiscriminate barrel bombs, hospitals flattened and aid denied, there’s understandable fury at the failure of the international community to broker anything more than the occasional pause. Observers are now warning that the imminent fall of the last remaining pockets of Aleppo represents the beginning of the end of the fight against the Assad regime.

The world couldn’t, or wouldn’t, stop the war. But will it at least try to bring those who have committed its worst crimes to justice? Condemnations of “war crimes” and even “genocide” have punctuated the past five years, but what do these terms actually mean and do they really apply here?

IRIN sought expert help to navigate the complexities of international law and explain the legal lie of the land:

With dramatic images and videos of bloodied bodies under the rubble in Aleppo (and elsewhere), it’s perhaps no wonder that many consider what is happening in Syria “the crime of crimes” – genocide.

For the most part however, experts say that Syria has not witnessed genocide, at least according to the legal standards set out in the 1948 Genocide Convention. That’s in part because the law was framed with a very particular event in mind: the Holocaust.

Proving genocide requires showing that the intent of the perpetrator is to destroy a racial, ethnic, national, or religious group.

Because of the narrow definition, plus the “difficulties of proving intent, the vast majority of crimes in Syria could not be qualified as genocide”, Marko Milanovic, associate professor of law at the University of Nottingham, explained.

”That does not mean, however, that these crimes are any less bad or less worthy of condemnation,” he stressed, pointing out that killing gay people, the disabled, or social or political opponents would also fail to qualify.

That’s why even the “killing fields” of Cambodia – where well over one million people were murdered because of class or perceived opposition to the Khmer Rouge – did not make the legal cut.

There may have been one act of genocide in Syria – in June 2016 the UN Commission of Inquiry on Syria concluded that so-called Islamic State was committing genocide against the Yazidis. It documented killings, sexual slavery, torture and more that it said was to an attempt to destroy the ethnic group – concluding that it amounted to genocide.

William Schabas, a professor of international law at Middlesex University in London, is considered to be one of the world’s leading experts on genocide.

He told IRIN that while he respects the UN commission’s work he doesn’t believe the Yazidi situation meets the legal standard. Genocide, he said, “raises the temperature and it raises the shock value.” That’s why NGOs often use the word – and victims understandably want what was done to them recognised.

Schabas said he believes “the important thing for people to understand is that giving it the label genocide doesn’t give it any value added” in terms of making crimes easier or clearer to prosecute. That’s because, in his opinion, “the case for crimes against humanity [in Syria] is really clear”.

Rogier Bartels, legal officer in chambers at the International Criminal Court, agreed, although he said there is some evidence that sentencing may be greater when the label genocide is attached.

“To me… ultimately what matters is that there is no impunity and that someone is prosecuted and punished if found guilty for unlawful behaviour,” he told IRIN.

In international law, there are three categories of crimes that individuals can be held criminally responsible for: war crimes, crimes against humanity, and genocide.

War crimes can only be committed during an armed conflict – the International Committee of the Red Cross began to explicitly refer to the war in Syria as such in July 2012, although that seemed clear far earlier, at least on an instinctive level, to many observers. 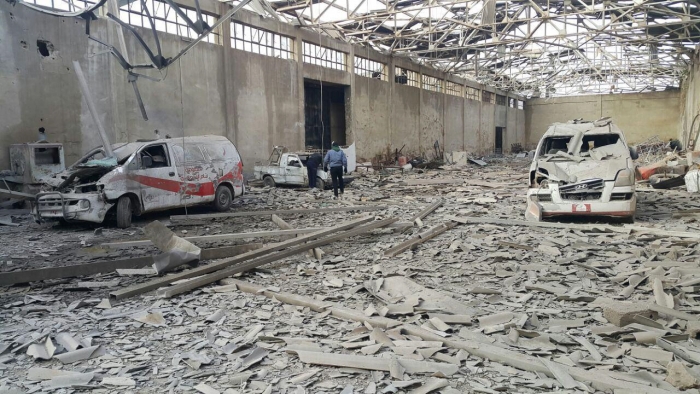 MSF
Two ambulances in Eastern Ghouta were destroyed in an airstrike earlier this month, while parked near a makeshift hospital

Once there’s an armed conflict, the basics of what you can and can’t do in war are codified by the Geneva Conventions as well as the Rome Statute that founded the International Criminal Court.

An isolated incident, for example one mistreatment – or killing – of a prisoner of war can constitute a war crime.

There is a small complication.

The non-international aspect label may sound counterintuitive to observers given the number of actors involved, but simply put it is a legal nuance that experts say probably won’t matter a great deal.

Starvation is not a crime in a non-international armed conflict. But as Bartels puts it, “if you look at the Syrian situation there are [so many likely crimes] – attacks on humanitarian convoys, civilians, and hospitals that may be easier to prove… so very specific instances, specific crimes may be more difficult to charge [if Syria is considered a non-international conflict]. But overall with what’s going on, they won’t have trouble finding crimes.”

The law has clearly not served as much of a deterrent in the Syrian war, but that doesn’t mean wrongdoers won’t eventually be brought to book. It probably won’t be by the International Criminal Court, however.

This is because Syria is not a member of the ICC, and without membership it takes UN Security Council referral for investigation – this was attempted in May 2014 but voted down by veto-wielding powers Russia and China.

Given Russia’s alliance with Assad and now its deep involvement in the conflict, future vetoes would be a near certainty if this route is attempted. 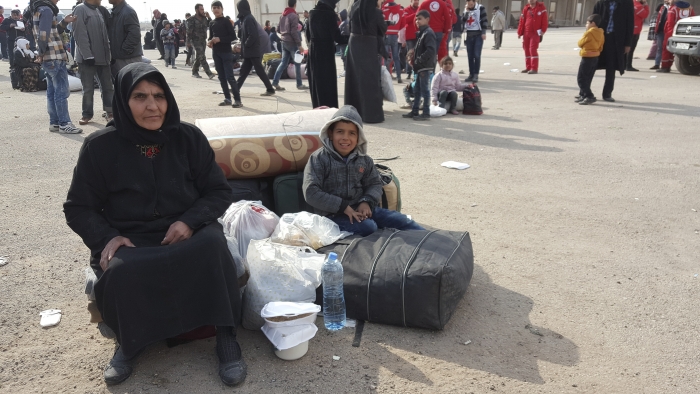 The only individuals likely to be investigated by the ICC are foreigners from countries who have signed up to the court’s jurisdiction – European nationals who have joined IS and are fighting on Syrian soil, for example.

But “these tend to be people who play pretty secondary roles,” said Schabas. “And when we talk about prosecuting, we are looking for the Eichmanns, not the low level people,” he added, referring to Holocaust architect Adolf Eichmann.

Cerone did see the possibility of a “very narrow referral [to the ICC]” on the chemical weapons issue, but had concerns about its viability.

There are options outside the ICC: national courts that accept what’s called “universal jurisdiction” can charge individuals with international crimes – war crimes, crimes against humanity, and even genocide – in their own courts. But which country will have the political will to pursue such charges after the conflict?

And as for justice within Syria itself, there’s no telling right now what a post-war Syria might look like or how it would look to deal with the horror of the past few years. Transitional justice attempts could include trials, or an Assad still in power might attempt to prosecute members of the opposition.

Assuming some sort of justice does come to pass, courts will need evidence. And that’s one thing they are likely to have.

Groups like the Commission for International Justice and Accountability have been meticulously gathering and storing evidence with an eye to future prosecutions – it alone has smuggled more than 600,000 documents out of Syria.

Stephen Rapp, US ambassador-at-large for war crimes issues, told the New Yorker that CIJA’s documentation “is much richer than anything I’ve seen, and anything I’ve prosecuted in this area” – and he’s worked on prosecutions in Rwanda and Sierra Leone. The CIJA is also not the only group collecting evidence.

Bartels at the ICC told IRIN that international courts have in the past had “very little documentary evidence” and have had to rely on witness testimony – this can be unreliable as memories fade and accounts contradict each other.

He said the mountain of evidence gathered over Syria “is useful and potentially can be used” but “needs to fulfill regular evidentiary standards”.

Evidence gathered during conflict “has been admitted before other tribunals,” Milanovic, from the University of Nottingham, pointed out.

Milanovic, for one, worries that “mass impunity for crimes in Syria is by far the most likely scenario, in the next few decades at least.

“We might see some isolated prosecutions by states on the basis of universal jurisdiction, if they get their hands on specific defendants,” he said. “But it… seems exceptionally unlikely that such defendants would be of very high rank.”

“We should see it [prosecution] as a very real possibility and we should be very careful about drawing conclusions about our ability to prosecute war crimes simply because of the frustration of dealing with it during the conflict.”

“There is a good likelihood that some of the people will fall into the hands of those who would like to see them punished.”

But for those who don’t, the long list of unresolved ICC indictments attests to the fact that arresting suspects is often harder than charging them.

And, most pertinent of all perhaps, how do you get justice for crimes perpetrated by key figures in the Assad regime if it is still in power?

(TOP PHOTO: An ambulance parked in front of an Eastern Aleppo hospital was hit by airstrikes in late November, leaving only its metal frame. Karam Almasri/MSF)