Missiles tore into a humanitarian aid convoy in Aleppo Province on Monday night as a partial US and Russia-led ceasefire collapsed in a fresh round of airstrikes and recriminations. It’s not yet clear who was directly responsible, but if it was designed to snuff out any final flickers of hope of diplomatic progress, it appears to have had the desired effect.

Tactics aimed ultimately at breaking the will of those who resist the regime have been employed on the ground for many months in Syria, not least contentious sieges that have led to near-starvation and/or forced evacuations.

On the morning of Eid al-Adha two non-descript 4x4s pulled up outside a mosque in the Damascus suburbs. Bashar al-Assad emerged to join prayers inside the recently evacuated town of Daraya.

In a speech following prayers – hours before the ceasefire was to begin – the president told state media he was “determined to retake every inch of Syria from the terrorists”.

The choice of Daraya for a public appearance was no accident: it was one of the first towns to begin protesting in 2011. But last month, after three punishing years of siege and bombardment, several thousand civilians and rebel fighters agreed to a last-ditch evacuation.

Since its fall, officials and observers have suggested Daraya may be the blueprint for how al-Assad plans to deal with rebel-controlled pockets around the capital and beyond.

Special Envoy to Syria Steffan de Mistura has warned of possible repeats. “After Daraya, we may have other Darayas,” he said in Geneva earlier this month. Al-Assad’s national reconciliation minister Ali Haidar similarly (but presumably with different sentiment) said: “Daraya is a domino, and after, others will fall.”

Further evacuations are definitely on the cards.

On Monday, a planned evacuation of several hundred rebels from the besieged, bombed-out Homs neighbourhood of Waer was postponed. Rebel groups including Ahrar al-Sham and other factions had threatened to end the already shaky ceasefire over reports that evacuations would begin there, arguing that “starve or surrender” siege tactics and "sectarian cleansing” by government forces had effectively voided the ceasefire. An activist in Waer said locals would not leave without the presence of the United Nations to guarantee safe passage to their planned destination, Idlib.

By the UN’s count there are approximately 590,000 Syrians living under siege. Other counts put the number above one million. The majority are besieged by government forces and their allies. A handful of pockets around Syria, including the northern Shia villages Fua and Kefraya, are besieged by mostly Islamist rebel groups.

Jan Egeland, who chairs the UN and International Syria Support Group (ISSG) Task Force on Humanitarian Access, told IRIN he fears that other besieged areas will go the same way as Daraya — although the international community is working hard to avoid this.

“The lesson of Daraya was that after four years there was no hope left and people gave up,” Egeland said. “We all failed the people of Daraya.”

“But I sincerely hope and believe that this kind of involuntary evacuation, that is ultimately caused by pressure, can be prevented,” he added, claiming the task force was “working around the clock” to relieve pressure on besieged areas and push for only voluntary movements of civilians.

"There has to be full freedom of movement for civilians in and out of areas,” he said. “In these cases [such as Daraya], it's not voluntary if you're starved into submission and there's no other option.”

Egeland admitted there had been few successes so far and that none of the 18 besieged areas, [he included eastern Aleppo – still not publicly listed by the UN as under siege], had “full freedom of movement”.

Lama Fakih, deputy Middle East director for Human Rights Watch, explained that voluntary evacuations "take place when civilians are living in an area that may be under threat, and they want to relocate from that area.”

However, recent examples of evacuations in Syria, including so-called “safe passages” for civilians set up by the Syrian government and the Russian defence ministry during this summer's initial siege of eastern Aleppo, happen within a “cloud of unlawful, coercive practices”, Fakih said, adding that the aim is not to get civilians to safety, but to create conditions inside besieged areas that ultimately force them to flee.

Indiscriminate bombardments, siege tactics and restrictions on humanitarian access all represent “effectively coercive measures” that can render the decision to evacuate involuntary, she said.

Experts say they are also a key element in the government's strategy for dealing with long-besieged rebel areas such as Daraya, Moadamiyeh, and Waer.

A war being won with local truces?

The use of local truces in rebel-held areas, followed up by evacuations, has helped to turn the war in al-Assad’s favour — especially in regions around Damascus and Homs.

Fabrice Balanche, visiting fellow at the Washington Institute for Near East Policy and an expert on Syria’s political geography, suggests the Syrian government may be picking off “weaker points” that are in rebel hands but that it knows are more vulnerable.

“[Daraya] was strategically important to get back… and the regime saw that it was a weak point,” Balanche told IRIN.

The same strategy could be at play right now in Eastern Ghouta, a large suburb of Damascus that includes the towns of Douma, Harasta, and Zamalka.

In-fighting earlier this year with other Islamist factions weakened the rebel group Jaish al-Islam’s defences in Ghouta, while the death of its charismatic leader Zahran Alloush late last year has also made a mark.

“If the regime is targeting Douma more today than it is in Harasta or Zamalka, it’s because Douma is under the control of Jaish al-Islam and Jaish al-Islam is particularly weak,” Balanche said.

Local sieges, truces and evacuations depend on a range of local factors: demographics, armed factions on the ground, and government plans for the area. Daraya had a comparatively small population of civilians and fighters, but it was situated close to strategic sites.

Other areas said to be earmarked for evacuation contain much larger civilian populations: tens of thousands in Moadamiyeh, between 75,000 and 100,000 in Waer, and nearly 300,000 to 400,000 in Eastern Ghouta (numbers depend on who is counting).

“One important aspect of Daraya is that the total population was very small,” explained Syria expert and University of Edinburgh senior lecturer Thomas Pierret. “Civilians and rebels combined…we’re speaking of a figure probably below 10,000 people.”

“Douma is more remote. The regime can probably live much longer with a besieged Douma enclave… I’m not saying that the surrender of Douma is tomorrow, but it might come in the future.” 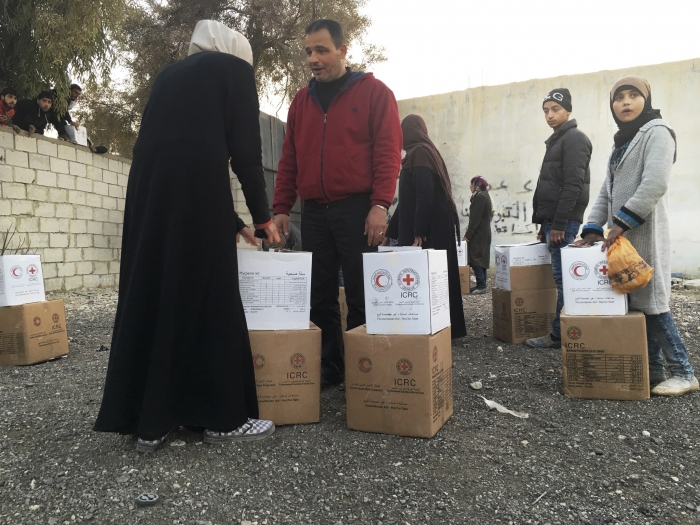 Moadamiyeh, next to Daraya, has had a truce with the Syrian government since the end of 2013; part of an agreement that initially saw rebels hand over heavy weapons in return for aid.

However, the city's local council has reportedly come under mounting pressure to accept the government’s terms in any future reconciliation or evacuation deal — or face repercussions.

“The regime is playing games with the city," a Moadamiyeh-based activist who goes by the pseudonym Dani Qappani told IRIN. “Sometimes, the regime says they can evacuate the fighters but they can’t take any arms [with them]. Another time, the regime says they can take civilians to the borders of Lebanon or Jordan, to Jarablus, to Khan Eshieh, but not to Idlib. But then they say they won’t evacuate anyone.”

Earlier in September, 300 people originally from Daraya, including more than 60 fighters who agreed to lay down their arms in a presidential amnesty deal, were evacuated from Moadamiyeh and taken to a nearby town, according to state media.

Qappani says the government is currently refusing to allow people to leave and aims to get Moadamiyeh to reconcile with the government. Fighters and civilians may be sceptical about what that really means, but they have no other options.

Sieges, the razing of cities, evacuations: these aren’t some new phenomenon. But, as employed in Syria, are they legitimate tactics of war or do they, as Balanche suggests, amount to “strategic ethnic cleansing”?

Pierret is more in line with Balanche and sees incidents like Daraya in more sectarian terms. Regardless of social factors, they represent a “strategy that targets certain communities based on their sectarian affiliation”, he argues.

“It’s sectarian cleansing in the sense of re-engineering. It’s basically the Syrian regime deciding that certain communities should live in certain places because they are now more easily controllable when they live there… a strategy of concentration.”