South Sudan’s political and military leaders have bled their country dry to fuel extravagant lifestyles and fund a war that has claimed tens of thousands of lives and forced millions to flee their homes, says the Washington-based conflict investigative group, The Sentry, co-founded by actor George Clooney and human rights activist John Prendergast.

A two-year undercover probe conducted around the globe by investigators drawn from the ranks of the FBI and the US departments of state and treasury found “massive criminal behaviour by the president of South Sudan and by his opposition, the ousted vice president of South Sudan, and their generals,” Clooney told a news conference in Washington on Monday.

“The simple fact is they’re stealing money to fund their militias to attack and kill one another”, as they amass still more wealth and their next of kin live in luxury, miles away from the violence that has displaced at least 2.4 million people and left more than five million in need, Clooney said.

Around $4 billion has been “lost” in the 11 years since the signing of the Comprehensive Peace Agreement in 2005, which paved the way for South Sudan’s independence in 2011, said Sentry investigator Brian Adeba.

Most of the misappropriated money has come from South Sudan’s oil riches, not aid money, which was given directly to NGOs because they are “more efficient at managing the funds than the government of South Sudan,” he added.

"What money has come in to the government has gone to fuelling the war. What it hasn’t gone to is education, health services, medication and the welfare of the people"

Over the same 11 years, “several of the most powerful politicians and generals in South Sudan appear to have accumulated significant wealth,” the report says. Much of it is parked in property, both inside and outside South Sudan, despite the country’s collapse into civil war in December 2013.

Generals who make less than $40,000 a year live in luxury villas with infinity pools in a neighborhood in the Ugandan capital, Kampala, where homes run upwards of $2 million.

Close relatives of President Salva Kiir and his former deputy turned bitter rival, Riek Machar, “reside in luxurious homes outside of South Sudan, including in one particular upscale neighbourhood in Nairobi, Kenya,” it says.  That suburb is Lavington, where homes cost at least $1 million.

When the price of a barrel of oil was high, it’s easy to see how officials with their fingers deeply embedded in South Sudan’s pie could take a huge slice of the resource-rich country’s pickings. But when oil prices began to tumble in June 2014 – a time when most of South Sudan’s oilfields were idle because of the civil war – they needed to do some creative thinking, investigators told IRIN.

“He was working with a Russian arms dealer, and said, ‘OK, we’ll sell you oil at this price when the pipelines open up again, in exchange for weapons now,’” LaPrevotte, who is now the Sentry’s lead investigator, said.

Keep it in the family

South Sudan, like many countries, has laws guarding against nepotism. But according to The Sentry’s investigations, Kiir regularly doled out stakes in companies to close family members – including a 12-year-old son.

Kiir’s family have held stakes in holding companies and banks. His wife has a 50 percent stake in a prominent telecoms company that used to be owned by the investment arm of former Libyan dictator Muammar Gaddafi’s government. The other 50 percent is held by one of her sons. The company in which Kiir’s 12-year-old has a 25 percent stake was set up in February this year.

A company owned by Vasili is involved in a joint venture with Malaysian oil major, Petronas, and recently purchased an entire Petronas subsidiary for the bargain basement price of 25,000 euros. Vasili is in charge of security for the oil fields.

And it’s not just Kiir who keeps it in the family.  The relatives of his chief-of-staff, General Paul Malong Awan, a powerful figure within the government, are also involved in “many business ventures”, said Mailey.

At one point, Mailey contacted a son of Malong to ask him to comment on some of The Sentry’s findings about corruption and money-laundering in South Sudan. After Mailey identified himself, he says Malong’s son, “without missing a beat, began pitching me on investment” in the company he runs.

The general’s son reportedly told Mailey that Malong and Kiir were involved in the company, and there was no public accounting process. Even if there were, he assured Mailey, there would be no consequences.

“I’ve never seen anything so brazen in my time as an investigator,” Mailey said.

Use a neighbourhood bank

UN High Commissioner for Human Rights Navi Pillay and Adama Dieng, Special Adviser to the Secretary-General on the Prevention of Genocide, met with Riek Machar, former Vice President of South Sudan, during their three-day visit to the country. The visit b 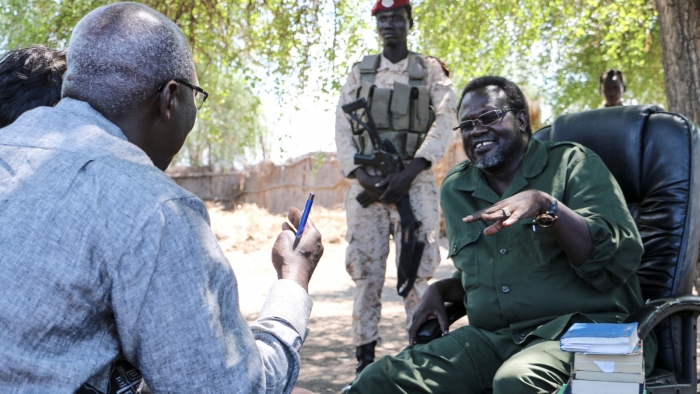 A substantial amount of South Sudan’s wealth is also held in bank accounts in Australia, where there’s a large South Sudanese expatriate community, she added. Sentry investigators tracked money being paid into these external accounts from Chinese, Turkish, Lebanese, and Kenyan businesses, among others.

One foreign company, Kenya’s Dalbit Petroleum, allegedly wired a reimbursement to the South Sudanese government to a general’s personal account, the report says. That money is thought to have gone toward paying for General Jok Riak’s luxury villa in Uganda – a property his $35,000 annual salary could never have afforded.

The banks implicated in the report are significant institutions.  The $300,000-plus paid to Riak by Dalbit went into an account held with the Kenya Commercial Bank, East Africa’s oldest and largest commercial bank.

Sentry investigators told IRIN that banks holding pilfered South Sudanese assets could be either turning a blind eye to the theft or – just as bad – the officials in South Sudan, who are laundering their money in foreign real estate deals, may have people in the banks on their payroll.

But there are ways of recovering the money, said LaPrevotte. Because the properties were paid for in dollars, “a civil forfeiture action could be filed in the US against those properties,” she noted.

Uganda and Kenya are both signatories to the UN Convention Against Corruption and could themselves seize the homes bought with ill-gotten gains.

“If they don’t have laws to repatriate the money, allow the US to do it,” said LaPrevotte. “The US could remove the generals’ families from those houses, sell them and work not just to give the money back to South Sudan, but to give it back in such a way that it is going to roads and schools and infrastructure.”

Sentry investigators pieced together the evidence for the report using satellite imagery, data mining, poring over official documents, and deploying investigators to speak with sources around the world.

While they can’t put an exact dollar figure on the amount of money stashed in bank accounts or invested in real estate by South Sudanese officials, LaPrevotte said they are certain of one thing.

“What money has come in to the government has gone to fuelling the war,” she said. “What it hasn’t gone to is education, health services, medication and the welfare of the people.”

A presidential aide denounced the Sentry report as “rubbish and “nonsense", while a spokesman for Machar described it as “commendable”, but denied the opposition leader had “luxurious houses” outside South Sudan.