Sudan is a lynchpin in the flow of migrants out of Africa. It is also a serial human rights abuser. For a European Union keen to throttle that flow, it’s an unfortunate combination.

Sudan is already benefitting from a $45 million regional programme to “better manage migration” in the Horn of Africa, under the European Commission’s $2 billion Emergency Trust Fund for Africa.

The EC has also announced a $112 million aid package “to address root causes of irregular migration and forced displacement” in Darfur, east Sudan, South Kordofan and Blue Nile. The problem is that the Sudanese military is involved in much of the instability in those regions.

“Sudan is not only important as a major transit route north to Europe, it is also a producer of migrants,” said Magnus Taylor, Horn of Africa analyst with the International Crisis Group.

“But if your job is to stop people arriving in Europe and to come up with a deal to reduce those numbers, then your interest in the internal politics of Sudan may be secondary.”

A string of media reports has condemned the EU’s agreement with a government that for 26 years has been headed by President Omar al-Bashir, a man charged with genocide and crimes against humanity by the International Criminal Court. The conflict in Darfur alone has uprooted 2.6 million people, despite a UN arms embargo.

The case for the defense

The EU has tried to push back, pointing out that funding will not be channelled through the government, and project partners will be large European international NGOs. It will also pursue a “rights-based approach”, according to an EU spokesperson.

Sudan and Eritrea crackdown on migrants amid reports of EU incentives

EU Commissioner for International Cooperation and Development Neven Mimica said he had received “a firm commitment” from the Sudanese authorities “to remove all obstacles and facilitate access, visas and travel permits to areas where EU projects will be implemented”.

Sudan is “a very difficult environment to work in”, said Taylor. It “requires the cooperation of the government and they can be incredibly obstructive”.

Khartoum has a history of falling out with – and expelling – its aid partners. The latest victim is Ivo Freijsen, head of office for the UN’s emergency aid coordination body, OCHA.

He was recently informed that his annual stay permit – due to expire next month – will not be renewed. OCHA described the move as a “de facto expulsion” and pointed out he is the fourth senior UN official to be expelled from Sudan in the last two years.

Khartoum appears to have been particularly annoyed by the figures OCHA published for the number of people displaced by fighting in Darfur involving the army and rebels in the Jebel Marra area. It also didn’t like OCHA citing a report by the Famine Early Warning Systems Network warning that four million people will be at crisis levels of food insecurity or worse this year as a result of conflict and a disastrous harvest.

The concern among government critics is that the EU deal risks further emboldening the authorities. True to form, the government has shown no hesitation in cracking down on a rash of student-led protests across Sudan since April.

In one example this month, 10 students from the University of Khartoum were arrested by security forces at the offices of a leading Sudanese human rights lawyer.

They were brutally beaten by the National Intelligence and Security Service, according to a press statement issued by their families. The students had been preparing a case against the sale of university buildings – a hot-button issue as the government roles out a controversial privatisation programme.

Front view of the University of Khartoum. For generic use 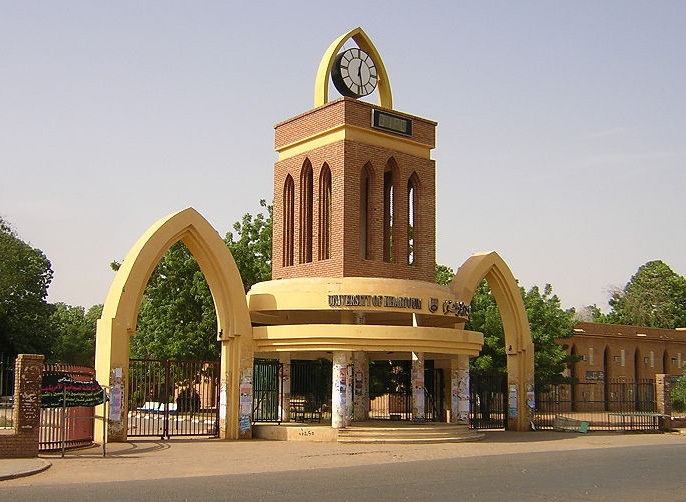 “They [NISS] threw a sound bomb inside the office – a small apartment actually in a residential building – and beat up everyone,” said Wafaa Salah, the sister of Badreldin Salah, who was detained. “They took everyone, even the two young lawyers and secretaries who were working there”.

Two of the students have since been released, but photographs shared by their families on social media show welts on their backs that appear to be the result of caning.

That has confirmed some of Wafaa’s worst fears for her sister, especially as the NISS has refused to provide any information on her whereabouts.

“We’re especially worried about Wifag and Mai,” said Wafaa, referring to the two female students in the group who are still in detention.

“The released students told us that Mai had been taken into an office and the door was locked, so they couldn’t hear what was happening inside. The NISS has a reputation of using sexual assault against female detainees and that makes us really worried.”

A history of authoritarianism

Sudan’s universities have historically been at the centre of virtually every major political episode since independence. The government has tried to keep a tight lid on protest, but in the last few months dissent has spread.

On 21 April, in central North Kordofan, security forces opened fire on students marching in support of their preferred candidate for the student body, killing 18-year-old Abubakar Hassan and triggering a wave of protests.

In Omdurman, one student was killed and three others injured at Ahlia University when a student group aligned to the ruling party shot up an event hosted by the Nuba Mountains University Students’ Association. The Nuba Mountains are a rebel stronghold in South Kordofan.

This fed into protests at Bahri University in north Khartoum on 28 April in which at least six students were arrested. Demonstrations on the same day also occurred at the University of the Red Sea in Port Sudan.

The unrest is uncoordinated, “but the basic demand is the same,” said activist and blogger Yosra Akasha.

“University [should be]… a safe space. The students want their freedom of opinion, and for political and social debate [to be] protected”.