Of all of the world’s forgotten conflicts (and there are plenty), that of Western Sahara, with its refugees tucked away in a remote desert, ranks as one of the most consigned to oblivion.

But last month, the world’s top diplomat, UN Secretary-General Ban Ki-moon, brought the issue to temporary attention with a rather undiplomatic move. After visiting part of the disputed territory, which is claimed by both Morocco and the Algeria-backed Polisario Front, he called Morocco’s presence there an “occupation.”

What counts as chaos in the land of diplomacy ensued: Morocco angrily ordered civilian members of a UN peacekeeping force out; there were meetings in the UN Security Council that amounted to little and no joint expression of support for the secretary-general; and finally a spokesman tried to walk back Ban’s comments, saying it had all been a “misunderstanding” born of his “spontaneous, personal reaction” to the situation of the Sahrawi refugees.

“Without meaning to do so, Ban has awoken a sleeping dog,” Marina Ottoway, senior scholar at the Woodrow Wilson Center think tank, said of the secretary-general’s actions.

But does that mean there could finally be progress in resolving one of the world’s most intractable conflicts, one that has rumbled on largely unnoticed for more than 40 years?

Here’s a look at the long-neglected Western Sahara dispute and the Sahrawi refugees stuck in the middle.

What is Western Sahara?

Western Sahara’s 266,000 square kilometres formed a Spanish colony from the late 19th century until the mid-1970s. Morocco claims the territory as its own, but no country officially recognises its sovereignty and it is countered by the Polisario Front, which has a government-in-exile in Algeria and the backing of many of the indigenous Sahrawi people.

When Spain washed its hands of the area in 1975, a war between Morocco and the Polisarios ensued. In the 1980s, Morocco built a 1,500-kilometre long wall through the territory, placing 82 percent on its side and separating many families.

By the time a 1991 UN-brokered ceasefire brought quiet as well as peacekeepers in the form of MINURSO, tens of thousands of Sahrawis had been displaced by the fighting. Most live in five Polisario Front-administered camps in Tindouf, Algeria, on the edge of the 18 percent of the territory that the Polisario Front considers “liberated”, and the international community tends to call a no-man’s land.

There’s no official count of how many Sahrawi refugees live in the camps – the Polisario Front and Algeria put it at 165,000 and the UN tends to base its needs assessments on an estimate of around 90,000.

Some live in tents, others in mud brick homes. They are extremely vulnerable to inclement weather – in October 2015 more than 17,000 homes were destroyed or severely damaged in flooding that affected both sides of the wall.

There are almost no employment opportunities for the Sahrawis in Tindouf, and almost all rely on aid to survive, although conditions are said to be significantly better on the Moroccan side because of the country’s investment in development there.

Human rights groups regularly report on Morocco’s heavy-handed way of dealing with Sahrawi dissidents, and there is concern that the Polisario Front does not tolerate dissent particularly well either. 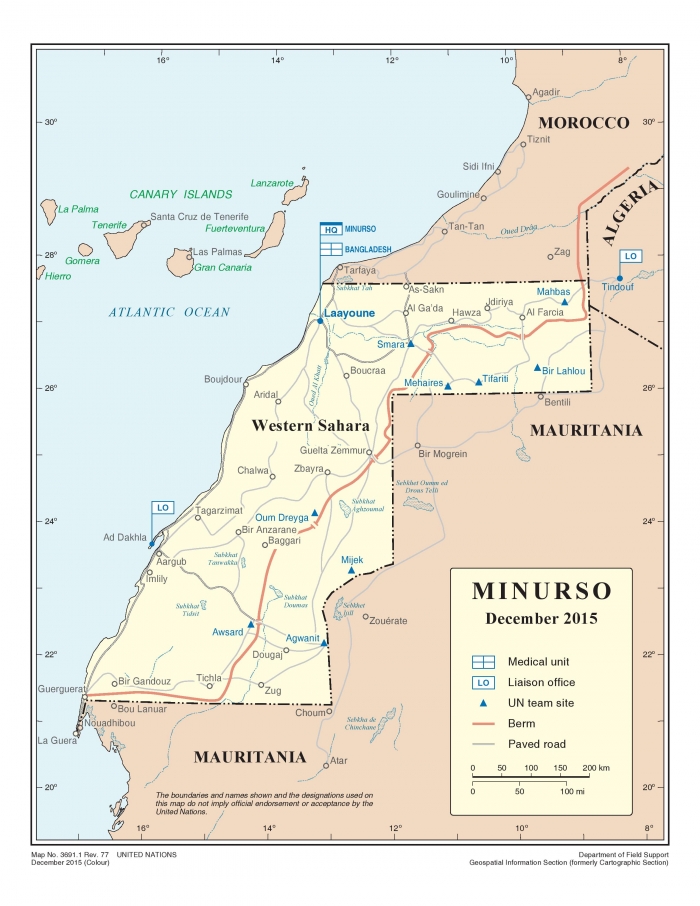 What do the parties want?

The 1991 ceasefire was meant to be followed by an independence referendum, and MINURSO set about compiling a voter roll in the 1990s. But deciding who had the right to vote on the territory’s fate became a Sisyphean task, as throughout the 1990s Morocco had moved many new residents into the area and both sides objected to various counts.

By the time MINURSO came up with a list– reportedly kept in Geneva for safekeeping – the possibility of a referendum actually taking place had become remote. A new plan by former UN special envoy James Baker, which included independence as one option in a vote that would take place after a period of autonomy, was rejected by Morocco and he resigned in 2004 out of frustration with, among other issues, the Security Council’s refusal to implement a plan it had approved.

The Polisario Front still wants some sort of vote on independence, but most experts see this as an unlikely prospect.

“You will never be able to determine who is entitled to vote in that referendum,” explained Ottoway.

Morocco is fine with that, as their current proposal is that Western Sahara has some form of local governance akin to that of any other region, as part of a larger decentralisation plan. This would give the territory no special status.

Both groups have proved intransigent in negotiations, and the UN has utterly failed at moving the process forward.

Part of the problem is that it’s an easy place for major powers to ignore. “Looked at from Washington, Morocco and Algeria fighting over the Western Sahara is like two bald men fighting over a comb,” said Ottoway.

It’s true that the conflict is usually low in intensity. But there are occasional flare-ups: at least five people were killed in 2010 when Moroccan security forces broke up a Saharawi protest camp.

From another perspective, Western Sahara is left on the sidelines not because it is small and remote, but because it has in fact become a pawn in global politics.

As Jacob Mundy, an assistant professor at Colgate University and an expert on the conflict pointed out, Morocco has positioned itself as a key ally of Saudi Arabia and the West in North Africa, sharing intelligence with the United States and even playing host to at least one of the CIA’s controversial black sites. This brings the US closely into line with France, already staunchly on Morocco’s in the dispute.

“Anytime Morocco is feeling the pressure on Western Sahara, they probably find ways of making themselves very useful to the United States,” Mundy explained.

“The real issue is whether or not any country on the Security Council is going to expend political chips on the issue of Western Sahara,” Baker said, shortly after his resignation back in 2004. “That’s what makes this so difficult; because the profile of the issue is so very low and they’re not going to want to risk alienating either Morocco, on the one hand, or Algeria, on the other, by taking a firm position. And they’re not willing to ask either or one or both of the parties to do something they don’t want to do.”

Anna Theofilopoulou, an independent political analyst who was part Baker’s team, believes diplomacy over Western Sahara does need some shaking up but that Ban’s move was the wrong one.

Reportedly denied the right to land in Morocco, the UN chief only met with Sahrawi refugees, the Polisario Front, and Algeria. Then he used the word occupation.

“You don’t use the big guns unless you know that you are going to get good results,” Theofilopoulou told IRIN. “That’s one basic rule of diplomacy.”

While we shouldn’t have any illusions about whether Ban’s move will change a conflict that has been stubbornly unmoving for decades, there is a slim chance of an opening ahead.

MINURSO’s mandate is up for its yearly renewal at the end of April, and while that will likely be a rubber stamp, this might be a good occasion for Ban to point out that the Security Council’s refusal or inability to force meaningful action has had serious consequences, not least in the form of a generation of refugees who have been born and grew up in tents.

“I think maybe this is time for the secretariat to play hardball,” Theofilopoulou said, suggesting that Ban should apply pressure on the Security Council.

Mundy is of a similar mind. “It would be interesting if the secretariat just dropped it in the Security Council’s lap and said, ‘you guys refuse to take a firm position and also expect the mediators to work. What do you expect?’”

But with France and the United States permanent members of the Security Council, it's unlikely we'll see any significant shift any time soon. And there is also no guarantee that stepping up international involvement would bring any greater peace or lead to a durable solution.