The debate over humanitarian reform is one of money, principles, and institutional change. But for many organisations involved, these boil down to one thing: power – and specifically for local organisations, the unwillingness of their international counterparts to give up any of it.

A long-standing tension between large Western-led international NGOs and smaller, locally-based groups who want a bigger role in emergency relief moved into high gear last week, where it was on public display at an international conference in Geneva.

Worldwide consultations held in the lead-up to next year’s World Humanitarian Summit, the biggest push in decades to reform the way aid is delivered, have recommended putting affected people and local organisations at the heart of a new model of humanitarian response.

A recently released synthesis report, wrapping up the conclusions of meetings with more than 23,000 people, was clear: the transfer of power to local players is not only necessary; it is a demand.

“The current system remains largely closed, with poor connections to... a widening array of actors...” the report said. “It is seen as outdated.”

But at last week’s global consultation in Geneva, the last in the series of pre-summit dialogues, discussions over what “localisation” means in practice laid bare divisions and spilled into accusations of “neo-colonial” behaviour.

“Be prepared to be uncomfortable”

Leading the charge for NGOs from the Global South was Degan Ali, executive director of African Development Solutions (Adeso), an NGO with its roots in the Horn of Africa, but also registered in the UK and the US.

“Southern NGOs are demanding accompaniment rather than direction,” she told an auditorium of government representatives, UN officials and humanitarians. “Be prepared to be uncomfortable.”

She said a group of local NGOs intended to press ahead with plans for their own southern NGO network, lobbying for a pooled fund
managed by NGOs headquartered in the Global South, and a target of 20
percent of all humanitarian funding to go directly to local organisations. A one-page
document outlining initial proposals was circulated (see photo), which
also called for compensation to be provided when international
organisations poach local staff, and a commitment to cover overhead costs. 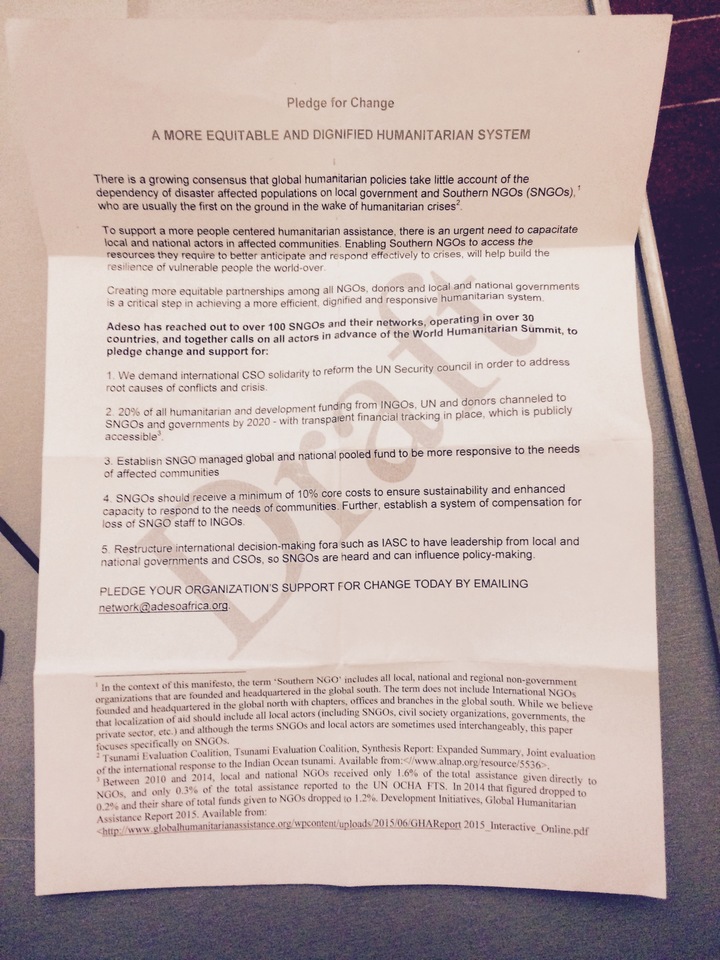 Photo: Ben Parker/IRIN
A proposal by southern NGOs for what they called a more equitable and dignified humanitarian system circulated at the Geneva meeting

According to Development Initiatives, of the $4 billion in humanitarian funding to NGOs in 2014, more than one third ($1.4 billion) went to the 10 largest international NGOs, many of which have become mammoth organisations that – like United Nations agencies – subcontract out work to local partners.

The idea of a southern NGO network isn’t new, and several international NGOs have already vowed to pass on 20 percent of their funding to southern NGOs by 2020, in a pledge called Charter4Change. Ali and her colleagues are using the summit to up the ante on their demands to be funded directly, and to voice their objections to their perceived treatment by international organisations.

They even pointed the finger directly at inclusive NGO consortia like the International Council of Voluntary Agencies and InterAction. “We are in these groups, but our issues are marginalised and our voices aren’t heard,” said Smruti Patel, Adeso’s network advisor. “Southern organisations are able to speak up for themselves on their own issues. UN and [international] NGOs are behaving policy-wise in the same way as colonial policies.”

The fury of local organisations, according to Adeso, is about far more than administrative technicalities. They are, said Patel, sick of the assumption they are corrupt, of being called partners while being treated as subcontractors, of a system that fails to cover their overheads and poaches staff, then questions their capacity. “They use us. This is not about partnership. INGOs have only themselves to blame for the levels of resentment and frustration...

“When INGOs speak out, they are just seen as being outspoken. When we do it, we are accused of being combative. It reminds me of my experience of racism.”

Joel Charny, vice president of InterAction for humanitarian policy and practice, admits that “some of the resentments, and the feeling of being marginalised and that we’re not good partners with local civil society organisations – that feeling has a basis in reality.”

But the views of local NGOs provoked from him and others a furious – and wounded – reaction.

“There’s been a very strong anti-international NGO bias that I personally think is really just completely off and counterproductive,” Charny said, speaking in a personal capacity.

We are in these groups, but our issues are marginalised and our voices aren't heard.

He described the Geneva consultation, which attracted more than 1,000 aid practitioners from different sectors, as characterised by political correctness, platitudes, and a marginalisation of international – rather than local – NGOs.

“The organisers of this have cooked the books to push a point of view with localisation.”

The WHS secretariat said his accusations were unfounded and pointed to the number of international NGOs who had committed to localisation both publicly and in their submissions to the process. But there’s no question that local organisations, who engaged in the summit process earlier than their international counterparts, feel the WHS has given them a platform and are determined to seize the moment.

They say, unequivocally, that humanitarian reform is not possible without addressing what they see as institutionalised discrimination.

INGOs, in response, feel this is a dangerous distraction. “With the challenges [facing humanitarians today], is the core challenge a discussion about whether INGOs are neo-colonial?” asked Charny.

Gareth Price-Jones, senior humanitarian policy coordinator at CARE, is not alone in arguing that the “consultations have reaffirmed that we’ve got the model right” and “what we struggle with is delivery.”

Others feel NGOs can better influence the reform process by sticking together with one collective voice.

But many local NGOs see in this view a Western, international dominance determined to maintain itself – while paying lip service to the idea of localisation. Patel is clear, for example, that she and her colleagues no longer consider reform of Western-led NGO consortia an option. “How many years has InterAction been around? 60? They’ve proved they can’t represent us.”

The debate raises fundamental questions about the role of international NGOs, bordering on existential crisis.

“The summit has forced some INGOs to look at their value-added,” said an international NGO representative. “WHS has brought out a whole lot of thinking, not just talking… If you’ve worked with partners [in a country] for 50 years, why do you still have an office?”

But for all the discussion around it, many aid agencies still don’t quite know exactly what localisation entails. They are also worried about the spillover implications of withdrawing their field presence, including making it harder to return if and when international assistance is needed, and an inability to authentically advocate for those in need.

“Legitimacy comes from the service we provide,” said Price-Jones. “If you aim to do yourself out of a job at country level then that’s fine, but how do you have any legitimacy at a global level?”

Aid must be as local as possible and as international as necessary.

The challenges involved in actually establishing the network proposed by Adeso and its colleagues are complex, and it is unclear whether donors are willing to fully support such a pooled fund. The demand for an increase in funding to local organisations (from estimates of 0.2 percent currently to Adeso’s target of 20 percent) would alone require a massive change in donor behaviour.

For some, the whole debate looks like “a food fight”, as one donor put it.

Jeremy Konyndyk, head of the Office of U.S. Foreign Disaster Assistance, tweeted that national NGOs were spending too much time “slamming” international NGOs and the UN, rather than proposing a new vision of respective, complementary roles and added value. It shouldn’t be a “zero-sum game”, he said (and the debate on Twitter has continued since).

On stage in Geneva, international NGOs acknowledged the challenge. “Aid must be as local as possible, and as international as necessary,” Ian Ridley, senior director of World Vision, said in a speech at the closing session. “We in the INGO community are ready and prepared to be part of that change.”

But for Adeso and the organisations standing with it, there is no going back.

“You can’t teach someone to swim and then deny them access to the pool! This isn’t a negotiating position,” said Patel. “This is a real process.”

* This report has been edited since it was first published.