On a chilly autumn day in Geneva, the elegant mansion that houses the Swiss Press Club was flanked by half a dozen black limousines, all with telltale diplomatic license plates. They were for Saudi Arabian diplomats who had turned up to support the launch of a generous Saudi-funded aid plan for Yemen.

The $274 million figure represents 100 percent of an appeal the UN launched for Yemen in April: the rarest of occasions that such an appeal has been met in full. The UN has since said it needs $1.6 billion to tackle the country’s humanitarian crisis.

But what looks in the account books like an enormously charitable humanitarian gesture takes on a starkly different perspective when global politics are brought into consideration.

A Saudi-led coalition has been bombing Yemen since late March in an effort to oust Houthi rebels from power. The UN estimates that much of the damage to civilian infrastructure, and most of the more than 2,300 civilian deaths, have been caused not by fighting between Houthi rebels and government forces on the ground, but by the bombing.

Even as the Geneva press conference got under way, journalists checking their smartphones saw a breaking news story: a fresh round of bombing in Yemen had hit a wedding party, causing at least 130 deaths, including women and children.

The Saudi-led coalition has denied responsibility, but the timing could not have been more awkward. While Faisal Bin Hassan Trad, Saudi Arabia’s ambassador to the UN, told his audience in Geneva about the Muslim tradition of providing relief to the poor and the needy, saying, “we deliver [aid] without prejudice to religion or nationality,” just across the road in the UN press centre, a spokesman for the UN high commissioner for human rights was condemning “the disregard shown by all sides for human life” in Yemen.

Little wonder then that the senior figures from UN aid agencies who joined Saudi diplomats on the podium for the launch of the programme looked a little queasy.

The Saudi plan for Yemen was first mooted in April and has been the subject of doubt and anger from many sections of the aid community ever since. Some have called it “the weaponisation” of aid. Others, Oxfam among them, have said that humanitarian agencies should not accept the Saudi money. 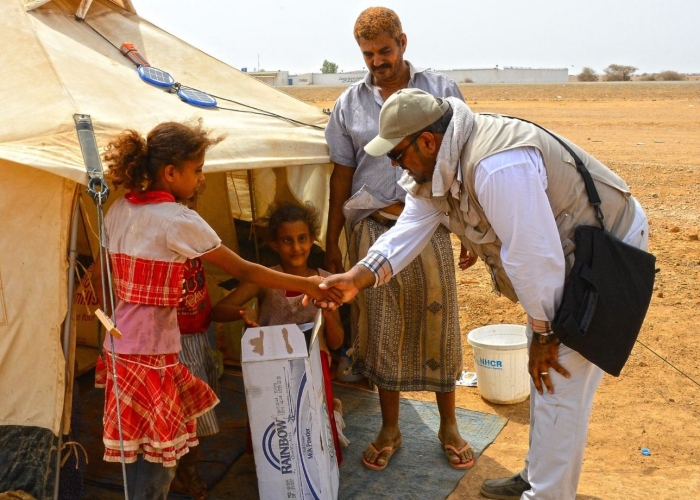 For the UN though, turning down money presents its own problems. Faced with multiplying crises around the world and austerity measures in traditional donor countries, it is badly cash-strapped. Programmes are being scaled back, food rations to refugees cut.

Richard Brennan, the World Health Organization’s director for emergency response, made the case starkly: “One hundred million people around the world are in need of aid. That’s the largest number ever documented. And most emergencies are not going away any time soon.”

The UN insists it imposed its own conditions for accepting the Saudi money. Chief among them: no restrictions on where and how it is spent. Suggestions that projects in Houthi-controlled areas might not be permitted were, according to UNICEF spokesman Christophe Boulierac, unfounded.

“Our conditions are neutrality and impartiality,” Boulierac told IRIN. “We won’t accept the money if there are strings attached.”

Start of a dialogue

The UN officials at the launch were clearly choosing their words with care. Rashid Khalikov, director of the UN emergency aid coordination body OCHA, described the initiative as “an opportunity to build a partnership based on confidence and trust,” and to “discuss how the centre will work in the future.” Reading between the lines, the unspoken subtext was: “Yes we’re glad to have the money, but let’s see how it goes.”

Some of the Saudi money has now been transferred to the UN. Brennan confirmed that the WHO had already received its first tranche.

A priority will be rebuilding Yemen's shattered hospitals. In Aden, scene of some of the fiercest bombardment and fighting, the Republic Hospital, one of the city's largest, lies shattered and empty.

The UN is in the strange position of using Saudi money to rebuild hospitals that Saudi warplanes destroyed.

“Our big concern is that there have been attacks on health workers and facilities,” Brennan told IRIN. “Some of it is collateral damage, but some, we know, were targeted.”

So the UN is now in the strange position of using Saudi money to rebuild hospitals that Saudi warplanes destroyed.

Brennan pointed out that this was not the first time aid agencies had faced such a dilemma.

“When I was in Iraq [working for a small NGO], two of my senior colleagues resigned in protest at accepting US money,” he said.

Times have changed since then. Over the last 15 years, grey areas between the military and aid agencies, have, many NGOs claim, increased the risks for those doing humanitarian work.

In the months and years following 9/11, for example, coalition forces in Afghanistan distributed leaflets telling the local population they had to provide information about the Taliban and al-Qaeda if they wanted aid deliveries to continue. Former US secretary of defence Colin Powell even famously referred to aid workers as “part of our combat team.”

When five Médecins Sans Frontières staff working at a maternity clinic in Afghanistan were murdered in 2004, MSF withdrew (after 24 years), partly blaming US and NATO forces for the “blurring of the lines” between independent humanitarian work and military objectives.

Events like this have not been forgotten, and contribute to the reluctance among some humanitarians to accept Saudi money.

The UN, which knows it cannot afford to be so squeamish, has chosen an interesting path. UNICEF’s Boulierac said it would accept the money but continue to “speak out” whenever it sees civilian suffering, continue to make the distinction between impartial humanitarian aid and murky military objectives crystal clear.

And that is what happened this week in Geneva. On Wednesday, UN High Commissioner for Human Rights Zeid Ra’ad al-Hussein presented a graphic report on alleged violations in Yemen to the UN Human Rights Council. The report contained evidence of violations committed by both sides, including the indiscriminate bombing of civilians and the blockade of Yemen’s seaports, which is slowing the arrival of lifesaving aid.

Today, the council is expected to pass a resolution promising technical support for Yemen to help it conduct its own independent inquiry into violations. The resolution is not as strong as some human rights groups hoped, but nevertheless the text does insist that Yemen carry out the inquiry “in accordance with international obligations." In theory, that means transparency, and no impunity for the perpetrators of violations.

Still, is there not a contradiction in accepting money from countries that may have caused the need for aid in the first place? Not so, according to UN agencies, who insist that giving large sums won’t let governments off the hook.

Their message is clear: however generous the donation, the conduct of conflict will not escape scrutiny, and there will be no impunity for anyone who commits violations.